My friends in Connecticut always talk about the wildlife that raids their yard. Deer, rabbits, moles and foxes — this is the city, I don’t have to contend with such pedestrian pests.

Every weekday from September to May, my small patch of property is overrun with none other than the Trespassing Teens.

There is a Catholic high school whose back faces my back yard, and when the school bell utters its shrill ear-splitting peal every afternoon, the Trespassing Teens, traveling in packs of two to 12, spill out of its front doors like lemmings rushing aimlessly to the sea. 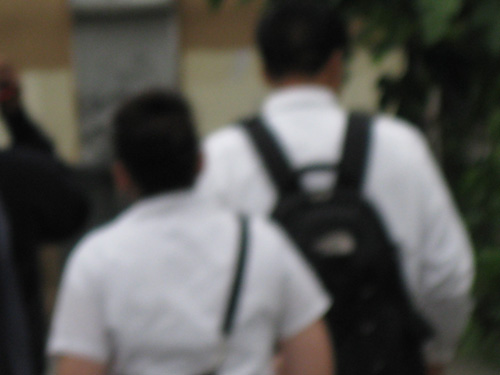 Photo by Nancy A. Ruhling
The Trespassing Teens run from September to May.

They push. They shove. They shout in celebration upon being liberated from their academic jail. And they saunter through the block’s access road as if they own it.

It seems they see the road as a shortcut, but they’re clueless kids, and they don’t realize that they aren’t saving any time. I had great expectations for these citizens of tomorrow, and I held them to higher standards than the public school kids in the neighborhood. Forgive me, God, for I made a mistake.

It’s been a long time since I was in high school, and I don’t know what this God-fearing mighty fortress teaches the Trespassing Teens, but I’m pretty sure reading isn’t in the curriculum because each of road’s gates has a sign, in scarlet letters, that proclaims “Private Property No Trespassing.”

I took to standing in the drive, herding them back like cattle. I have a lot of patience, and I like kids, so I was willing to take the high road and forgive these litterbug lambs of God who leave a Hansel and Gretel trail of junk-food wrappers, cigarette packs and Red Bull cans in their wake. (You know, “forgive us our trespasses as we forgive those who trespass against us…”)

Some of them complied, but more often than not they complained.

There was, for instance, the menacing 6-footer who stood his ground and refused to do the walk of shame. 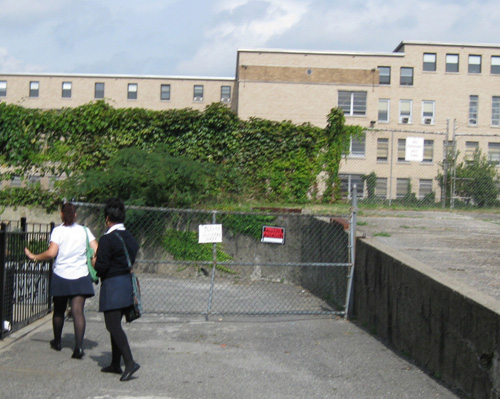 Photo by Nancy A. Ruhling
Gates and signs don’t deter the Trespassing Teens.

I summoned up my inner Ziva David and threw my 93-pound, 5-foot-3 frame into the defensive posture I learned in yoga.

He was supposed to cower in fear, but he was laughing. This is something that wasn’t covered in class. Obviously, the situation called for a more drastic measure: I decided to stare him down.

When he didn’t blink after two minutes, I had to let him off the hook. I did not want to injure a minor no matter how menacing.

I thought I’d have an easier time with the cute little bubble-gum-chewing girl in regulation skirt and school-monogrammed sweater. Like the 6-footer, she refused to go back. She was more my size, but she had a mighty tongue: She called me a lot of names that aren’t in the Bible. For good measure, she spit at me.

So it was that the block got together and bought a lock for the gate on the far end of the road. The idea was that the Trespassing Teens would be punished for their wayward walk because they would have to go all the way back to the opposite street to exit. We figured that, like Pavlov’s dogs, they could be trained with time.

But there is a ramp by our gate that is owned by the school. It looks just like a road, and more often than not, drivers take it, only to find they are blocked by the school’s Gestapo-style chain-link fence.

On the first afternoon of the lockdown, I sprang out of the house with my trusty Canon point-and-shoot and set about to record the momentous event.

When the tide of Trespassing Teens hit the gate, it didn’t waver. These kids, the ones who were too lazy to walk around our private drive, simply jumped over the ramp and onto the street like Olympic pole vaulters. 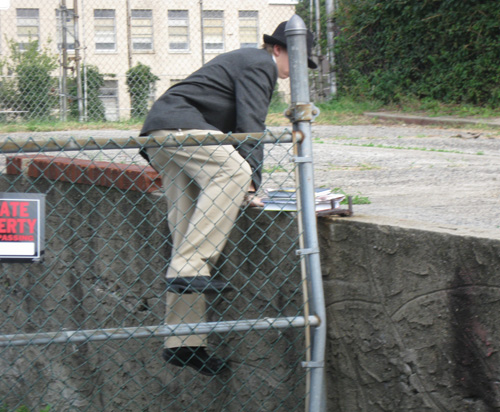 Photo by Nancy A. Ruhling
Is this kid a gazelle or a track star?

I was just about to call up my Connecticut friends and offer to trade the Trespassing Teens for all their deer, foxes, moles and rabbits, when another pack of kids came to the gate. One of them was on the brink of jumping over the ramp but changed his mind.

He walked around to the front, where I was wearing my point-and-shoot like a cop’s badge, and asked what was going on. When I explained, he said, sweet as my Aunt Martha’s apple pie, that he wouldn’t do it again.

With that, he walked off into the sunset toward the subway, and, my prayers momentarily answered, I retreated to do battle another day.