It was pouring, and I couldn’t find it. I was annoyed because it’s not every day that you pay $50 for an umbrella, especially if you’re me.

But this was a mighty fine umbrella. In fact, a greater one has never dripped itself dry in my presence.

It was the basic black collapsible model that fits in a handbag or briefcase, the kind that is so ubiquitous that nobody ever notices it. 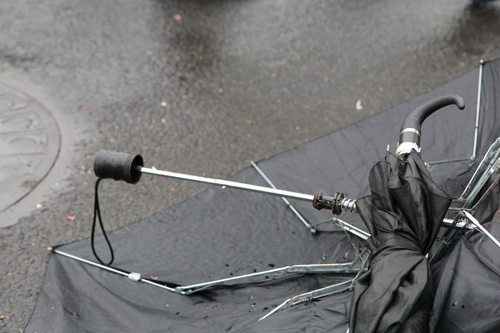 Photo by Nancy A. Ruhling
A pair stranded in the street.

The fact that it didn’t call attention to itself was the real beauty of it. Underneath its unremarkable exterior it was an M1 Abrams tank that repelled raindrops and whipsawed the wind.

That’s why I got it. I needed something to protect me when I walk my Wheaten terrier puppy, Zora, who runs like the wind in the rain, and the $9.99 drug store version I had had wilted the first time it got its webs wet. 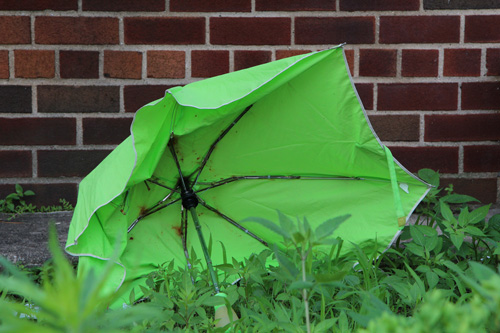 Photo by Nancy A. Ruhling
Captive, in a front yard.

I was pretty pleased with this Ninja-like specimen, which unfurled like a flower to a full six feet, big enough to cover me and Zora on the rare occasion when she stood still while it was raining men and women and cats and dogs.

Seeing how much I had invested in this umbrella, I took extra pains to take extra good care of it. Every time I used it, I put it, opened, on the front porch to dry. In fact, this became a habit, and sometimes I would let it stand there for hours before folding it and gently carrying it inside like a newborn baby. 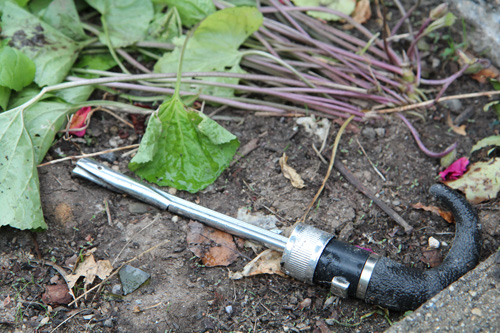 Photo by Nancy A. Ruhling
A beheaded bumbershoot.

I could see no harm in this. My house is guarded by a cast-iron fence and two sets of steep steps. And the porch is bricked in; you can’t see anything that’s on it from the street. Or so I thought.

On this particular afternoon, the rain was there and the umbrella wasn’t, and my tears began to fall. At first, I thought my prize had been swept away on the wind. I looked all over the yard and sidewalk, but there wasn’t a trace. 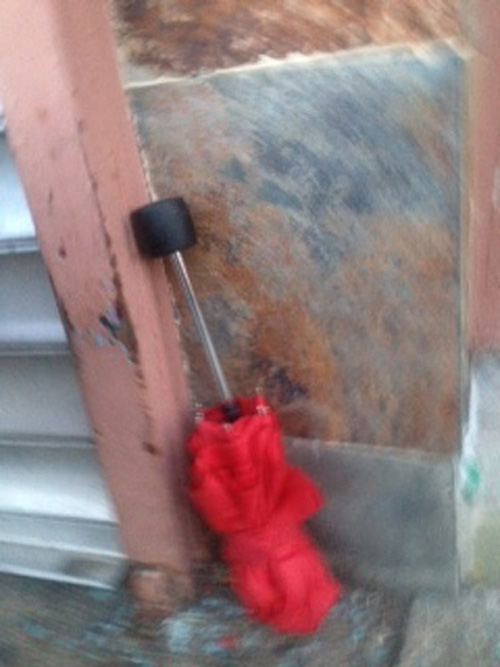 Photo by Nancy A. Ruhling
Waiting out the rain.

My wallet ached, but I didn’t ponder my umbrella’s fate. I strode to the store and, soaked, I did the only thing I could: I shelled out $9.99 for a made-in-China special that I knew wouldn’t last more than a dozen downpours.

The new umbrella was like a gymnast, turning itself inside out over and over again even in the sparest sprinkle, its spindles bending as they tried to escape their hot-pink cape. But a month came and went, and it never left home without me.

I continued to put it on my porch, which is where it was resting after a particularly drenching downpour. 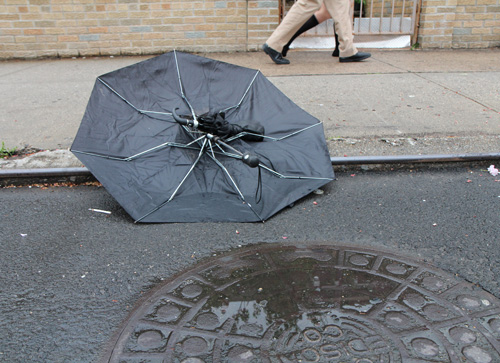 Photo by Nancy A. Ruhling
Waterlogged victims of the storm.

But when I went to get it, it had vanished into the thin, rainy air.

Where did it go? Did some Superman with X-ray eyes leap from the street to the porch and spirit it away? Did it hitch a ride with an eagle and fly to the moon? Or did it elope with the first pretty parasol it saw?

The street was littered with the carcasses of broken bumbershoots, but mine was not among the dead. Wherever it was and whoever had it, my umbrella wasn’t keeping the rain off of my back. 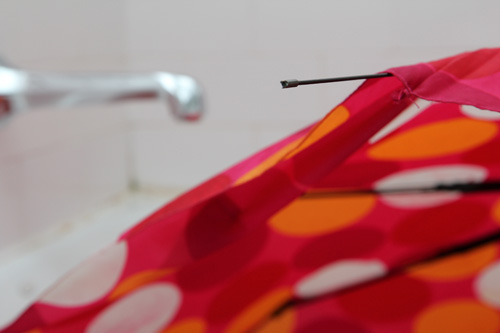 Photo by Nancy A. Ruhling
Will this one wander away, too?

With $20 in my pocket and a scowl on my face, I trudged to the corner drug store, the rain turning my parka into a scuba diver’s wet suit.

There weren’t many umbrellas left, so I took the first one that caught my eye. It has a bright canopy of orange, pink and white circles. By the time I walked it home, its spring colors had run in the rain.

I didn’t put it on the porch. I let it dry out in the bathtub.