When the bell trills, Jet Thomason, a tree-tall Texan, adjusts the cowboy hat that’s the color of his first name and jumps on the bicycle like he’s trying to tame a bucking bronco.

He twists the curly ends of his handlebar mustache, plants his hands firmly on the handlebars and pedals his fancy cowboy boots for all they’re worth.

Before you know it, chains chug, wheels wind, gears grind and in the colorful cart behind him a cheese-wheel chunk of ice is shaved, its shivering pieces piling up in a stainless steel bowl. David Burdick honks a horn to issue a retreat to Jet’s feet. 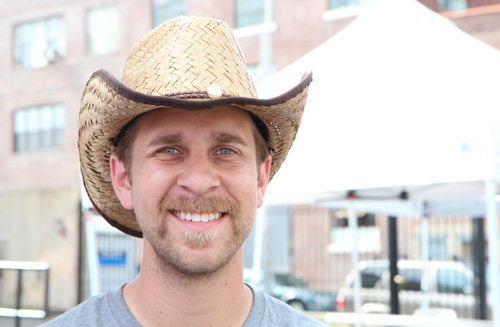 Photo by Nancy A. Ruhling
David built the snow-cone mobile.

As Chelsea Barker cheers from the sidelines, David makes a snowball and packs it into a clear-plastic cup. He douses it with strawberry syrup, puts another snowball on top and pours a river of red over it. 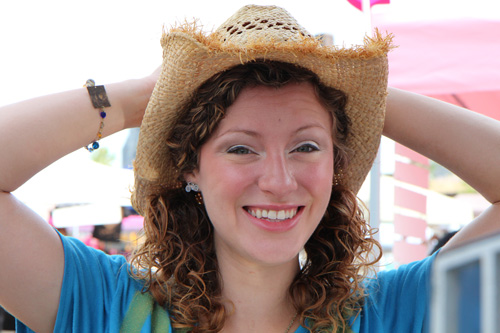 Photo by Nancy A. Ruhling
And Chelsea makes three.

Jet, David and Chelsea are the Ice Riders, and this is their first snow cone of the day. They’ve been peddling — and pedaling — their frosty confections since they built their Ice Riders contraption last year.

Photo by Nancy A. Ruhling
Jet takes the wheel.

Jet, a muscle-bound Marlboro Man, got the idea for the stationary snow-cone mobile a couple of years ago when he was strolling — and sweating — through Times Square. You see, he grew up in San Angelo, Texas, where they know a thing or two about keeping cool.

“There wasn’t a snow cone in this city to be found,” he says. “And I had a craving for them.” 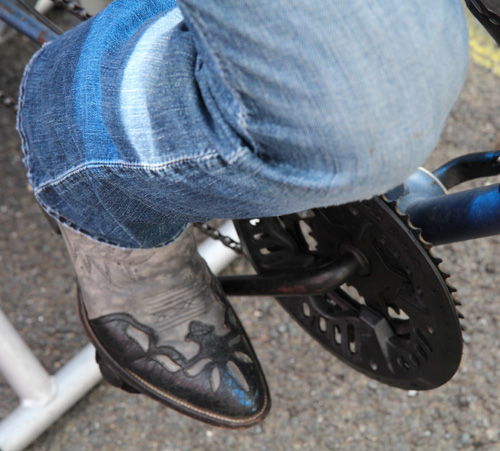 Photo by Nancy A. Ruhling
His boots are made for pedaling.

But he didn’t come all the way to New York City just to make snow cones. He’s a song and dance man, and he fancied a career in musical theater. The acting jobs came and went; it was the snow cones he couldn’t get out of his head, whether he was waiting to take a dinner order or a bow.

For several endless summers, Jet was a Lone Rider. Then he met David, an aw-shucks, yes ma’am, no ma’am dude from Cape Girardeau, Missouri, who got Jet’s hard-riding snow cone thing right away because he had worked his way through college in a bicycle shop. 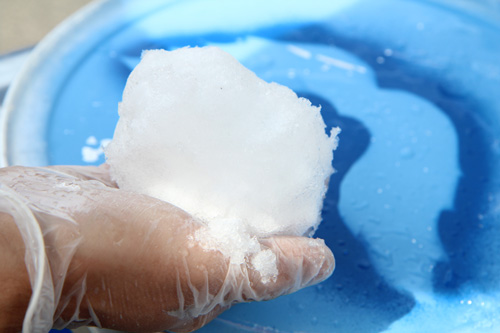 Photo by Nancy A. Ruhling
The ice is nice … and cold.

And he had spent a stretch in Austin, Texas, where he got hooked on really good barbeque. He had made his way to the Big Apple to check out the restaurant industry with the hopes of starting his own eatery. That’s why he was bartending at the restaurant Jet was waiting tables at.

David built the first Ice Riders machine. “It was like a science project for us,” he says. “We use old cheap mountain bikes.” 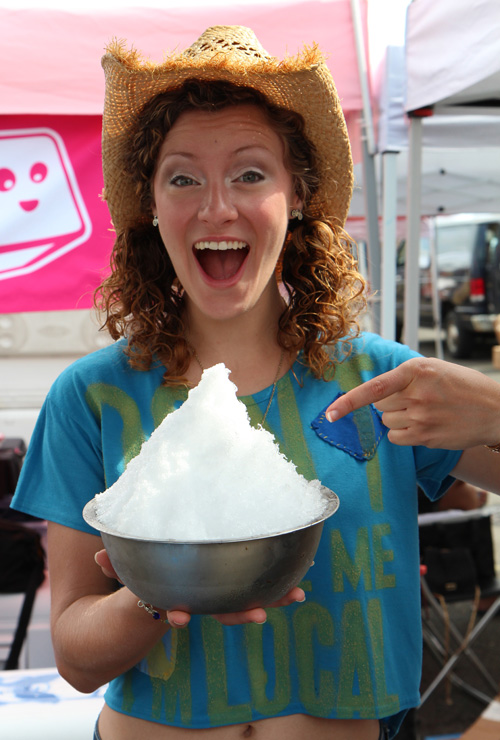 Photo by Nancy A. Ruhling
Chelsea screams for snow cones.

Around the same time, Jet met Chelsea, a cocktail waitress/actress form New Orleans. They were riding in the same subway car.

“He hit on me,” says Chelsea, who plays Elly Mae Clampett to Jet’s and David’s urban cowboys. “It was 1 a.m., and it was New York City. I thought he was a serial killer. And he didn’t even have the mustache then.” 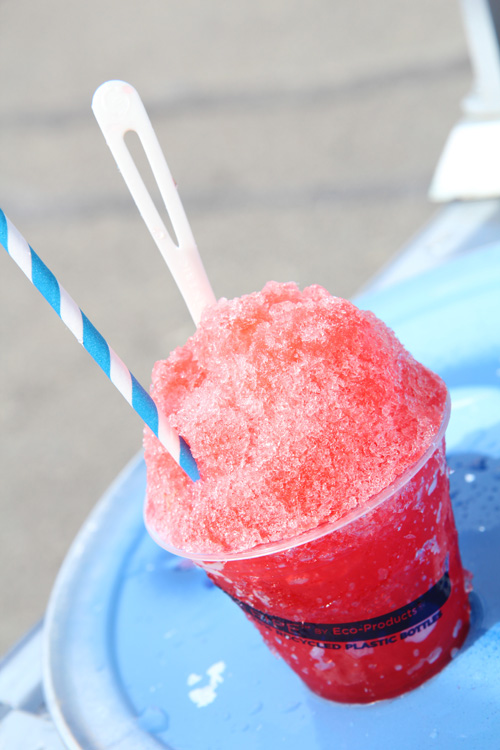 Photo by Nancy A. Ruhling
An Ice Riders snow cone in all its glory.

When they became a couple, Chelsea slipped into the role of marketing director of the budding company, which has two Ice Riders and a third on the way. They sell their snow cones at flea markets and street fairs and act as ice breakers at private parties.

“This has the potential to become a lifelong career that offers more security than acting,” Jet says. “And we dress up as cowboys — it’s fun. The quality of our product and of our business is the only thing that is serious.” 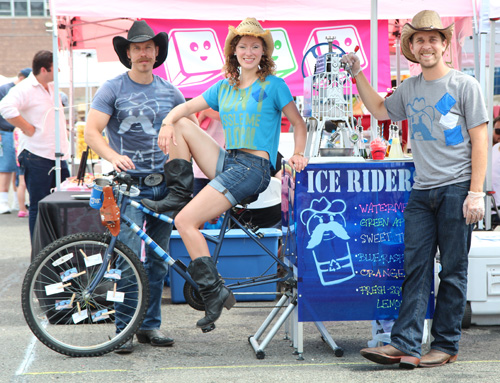 Photo by Nancy A. Ruhling
They’re ready to ride.

The three Ice Riders dream of a time when there’s one of their snow-cone mobiles on every corner in every corner of the globe. Theirs is a seasonal business, which is why they’re taking their ice bikes to the Virgin Islands in the fall.

In between snow cones, Jet and Chelsea will continue to go to auditions, and David, who has put the barbecue idea on the back burner, will keep tending bar.

Oh, yes, there’s one other thing. You can’t be an official Ice Rider without a mustache. Chelsea says she’s still working on that.