It doesn’t take much persuading to get Kevin David Thomas to do some goofy poses. 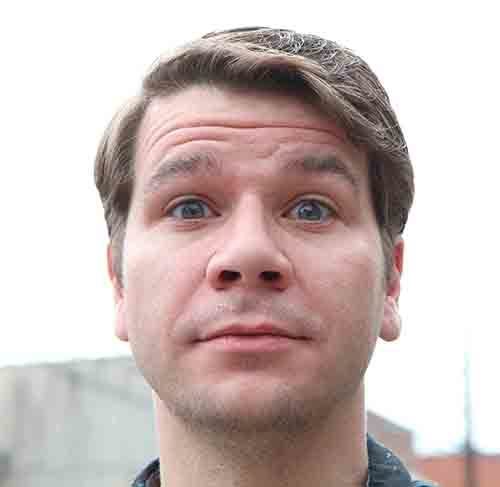 Photo by Nancy A. Ruhling
Kevin’s an actor, singer and music director.

He is, after all, an actor, so this nonsense stuff comes naturally.

It’s like doing an audition. Once he gets going, he doesn’t want to stop.

So it has been since his boyhood. 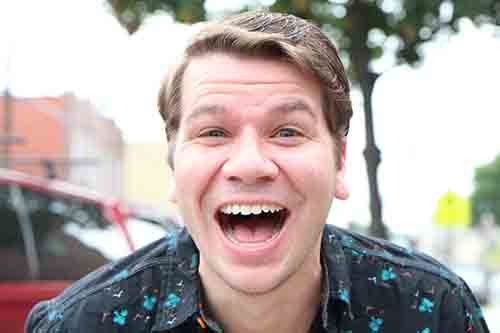 Photo by Nancy A. Ruhling
He’s a most happy fellow.

Cherub-cheeked Kevin takes his face-making seriously whether he’s bulging his eyes like golf balls and sticking out his tongue like a serpent. Invariably, he arranges his features in happy mode.

Kevin grew up in Elmira, New York, which is best known as the place Mark Twain spent his summers writing about the escapades of Tom Sawyer and Huck Finn. 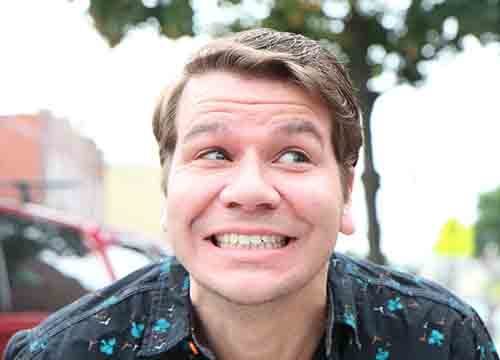 Photo by Nancy A. Ruhling
Hamming it up.

It’s also the place where, at age 14, Kevin made his official acting debut.

It was the summer before he started high school, and he was tapped to play a trumpet solo in the second act of the city’s professional production of Mark Twain the Musical! 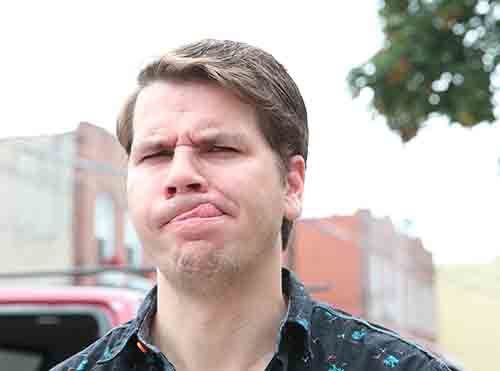 Photo by Nancy A. Ruhling
Does this make you laugh?

“They were going to have me play, but in the end, they used a recording,” he says, smiling. “I did eight shows a week for eight weeks, and I caught the acting bug immediately. I auditioned for all two musicals that were done semi-annually in the town.”

This scanty schedule gave Kevin a lot of time to brush up on his piano playing. 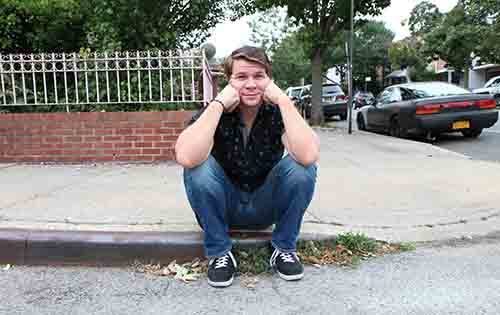 Photo by Nancy A. Ruhling
Kevin’s just hanging out on the curb.

“I used to come home from school every day and play and sing show tunes,” he says.

An actor he was to be, and as soon as he graduated from the Conservatory of Music at Baldwin Wallace University in Berea, Ohio, he sang his heart out at the Weston Playhouse in Vermont as Curly in Oklahoma! 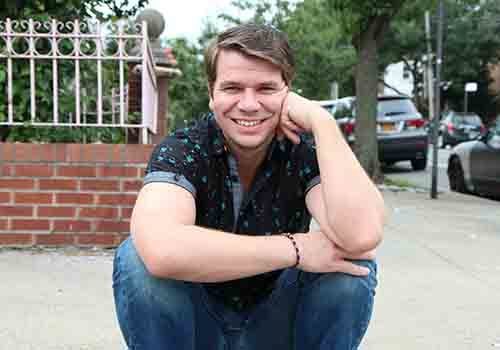 Photo by Nancy A. Ruhling
Getting ready to be goofy.

Actors’ Equity card in hand, he headed to New York City, where he auditioned. A lot.

“The first year or two was slow,” he says. 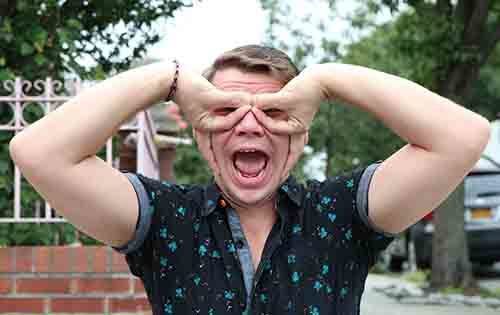 Photo by Nancy A. Ruhling
Does Kevin have your attention yet?

He worked as a secretary for a nonprofit NGO before getting his first big break ― a gig on a Disney Cruise Line ship.

As soon as he stepped back on solid ground, he spent two years performing with the national touring company of Les Miserables. He made his Broadway debut in the first revival of the play in 2006. 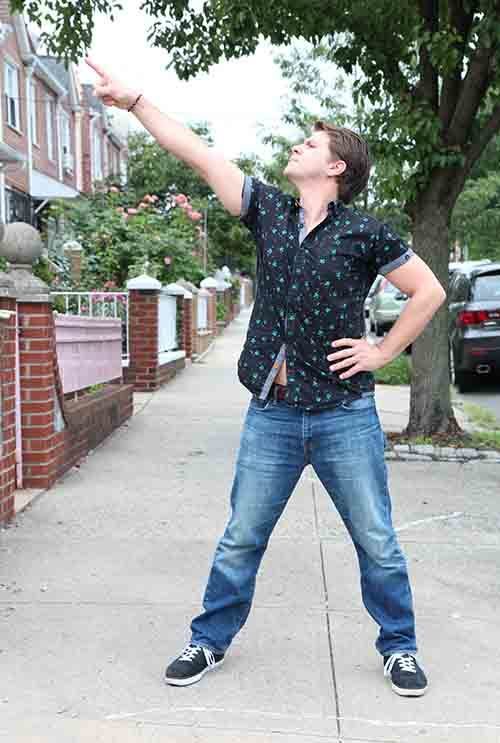 Photo by Nancy A. Ruhling
Look at  me!

In 2009, he was cast, along with Angela Lansbury and Catherine Zeta-Jones (and later Bernadette Peters and Elaine Stritch) in A Little Night Music.

“I never get bored when I’m on stage,” Kevin says. “Even though I’m playing the same part and saying the same lines, it’s a challenge to do it better every time. It’s magical. When I was in A Little Night Music, I saw someone sobbing in the front row and I thought, ‘I’ve been that guy.’” 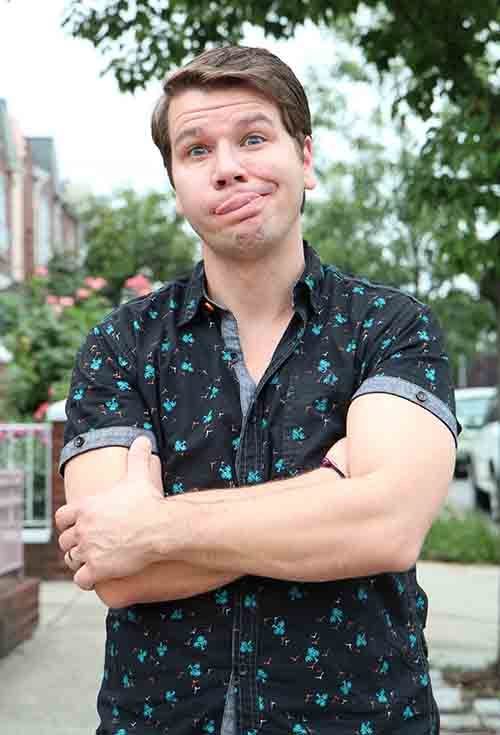 Photo by Nancy A. Ruhling
OK, how do you like this one?

During this time, Kevin also honed his skills as a music director. In between performances, he coached singers and taught musical theatre in places as far flung as Russia, Shanghai and Rio de Janeiro, eventually landing his current teaching position in the New York Film Academy’s musical theater department.

Then, in 2011, he was cast in a role that literally changed his life. 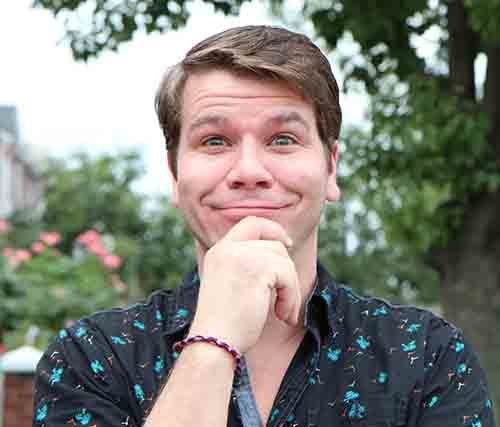 Photo by Nancy A. Ruhling
Perhaps you’ve seen him on Broadway.

He got the male lead in Shakespeare’s Romeo and Juliet at Northern Stage, a quaint regional theater in Vermont. It was here, where Kevin had acted in his first play, that he met her.

Her name is Sutton Crawford and she, it turns out, was his Juliet on stage and off.

“We fell in love and vowed to change the play’s tragic ending,” he says. “On February 7, 2015, three and a half years after we met, I married her.”

You may have seen their wedding. It was on Becoming Us, the 2015 ABC reality show that followed her family’s life as her stepfather transitioned from a man to a woman. 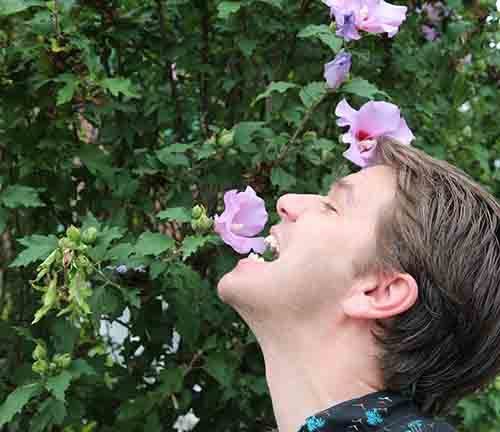 Photo by Nancy A. Ruhling
Kevin communing with nature.

In his spare time, when he’s not hiking or doing other outdoor activities, Kevin co-hosts the podcast Behind the Curtain, Broadway’s Living Legends.

“We interview everyone from set designers to composers,” he says. “We want to preserve this history for future generations. It’s a labor of love.”

These projects have made Kevin a very happy man, hence his smiley-face poses.

“I want to follow all three of my passions – acting, directing and teaching,” he says with a satisfied grin. 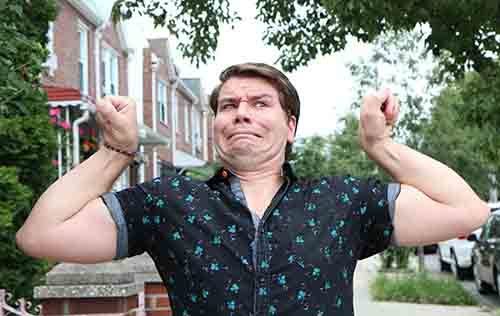 Photo by Nancy A. Ruhling
But seriously, folks …

He admits, though, that at some point he may have to make a choice.

“It’s getting hard to balance them,” he says. “My acting career has suffered as I’ve focused on being a music director. But I’m eager to get back on Broadway. I love the challenge and the people.”

“I’ve always been perceived as a youthful type,” he says. “I’m looking forward to transitioning to leading man.”

To prove his maturity, he breaks into a serious smile.