“Where’s the baby? She has to be here somewhere.”

Donna Bungo knows this because when she packed the insulated cooler this morning, there were four. And now there are only three. There’s no way one escaped, at least she doesn’t think so. Casually alarmed, she carefully culls the covers, her old flannel pajamas, until she comes up with the critter.

She playfully scolds her five-week-old charges and cuddles the sleepy-eyed squirrel who almost beat her at hide-and-seek. It’s not easy being a foster mother; Donna’s been bottle-feeding this brood since they were two-week-old butt-ugly baldies half the size of butter sticks. 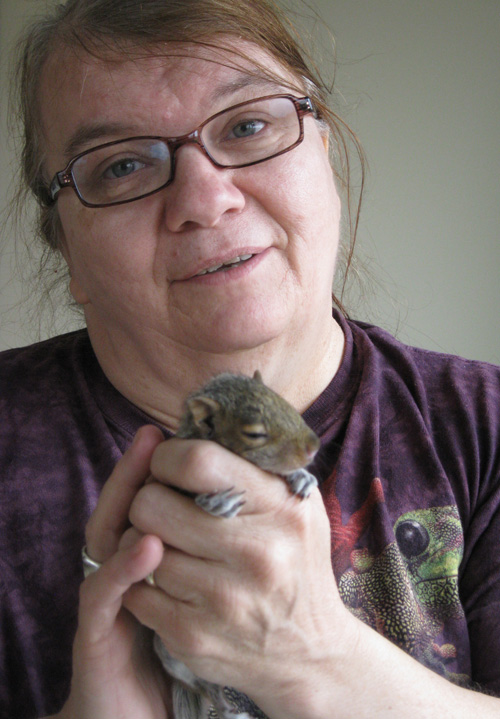 Photo by Nancy A. Ruhling
Donna cuddles one of her babies.

“They were as cold and wet as ice cubes,” says Donna, a velvet tank with Sinatra-blue eyes whose fox-red hair is pulled back so it trails down her back like a long tail. “I wasn’t sure they were going to make it.”

She takes a baby bottle out of the cooler, and the little squirt of a squirrel chug-a-lugs it as if it’s a chocolate milkshake. It’s a mixture of powdered Esbilac Puppy Replacer Milk spiked with heavy cream and avian vitamin supplements. (More photos.)

These little guys were born in an attic nest; the homeowner’s cat treed their mother, and Donna was called upon to step into the breach. 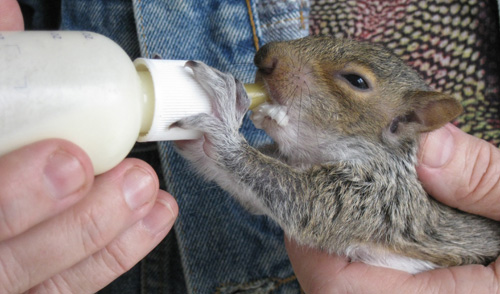 Photo by Nancy A. Ruhling
Donna’s hand-held bottle does the trick.

Donna, a New York State licensed wildlife rehabilitator, has been coming to the rescue of animals ever since she was a kid growing up outside of Cleveland.

“There was a pond nearby, and I used to bring home a pickle jar filled with pollywogs,” she says. “And for 23 years, I had a raccoon.”

Through the years, she’s taken in a lot of animals; right now, the squirrels are the only rescues in her family. The quartet of turtles that are the size of dinner plates, the half dozen guinea pigs (who knew the mother was with children?) and the Australian bearded dragon named Steve who lives in a mesh enclosure are pets that’s she’s farmed out to friends who have sympathetic landlords. 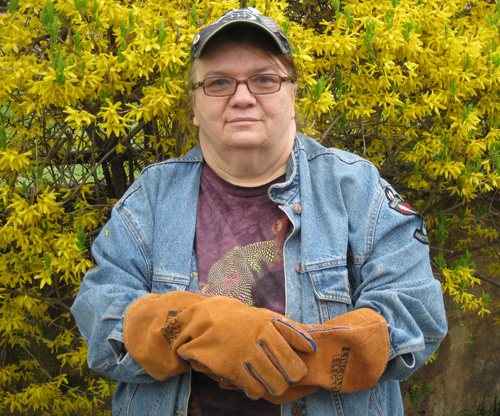 Photo by Nancy A. Ruhling
Donna has always loved outdoor life and wildlife.

“When people hear I rescue wild animals, they freak out at the word wildlife, sometimes imagining I have tigers living in the closets,” she says. “I might — I just haven’t found them yet!”

Donna’s rescue work has led her to all kinds of harrowing adventures. There was the time long ago when she was called upon to pluck a raccoon out of a Rego Park back yard; as she was carrying the calm critter in her arms — she was outfitted in elbow-length suede welder’s gloves lined with Kelvar — something spooked the coon. It bit her in the jaw, and she ended up in the emergency room.

“Raccoons don’t pull when they bite,” she says matter-of-factly. “They only puncture.”

Donna not only protects animals, but she also protects people and property. She’s been in security management for three decades, a vocation she took up shortly after college when she was rejected by the good sisters of St. Francis in Tiffin, Ohio. 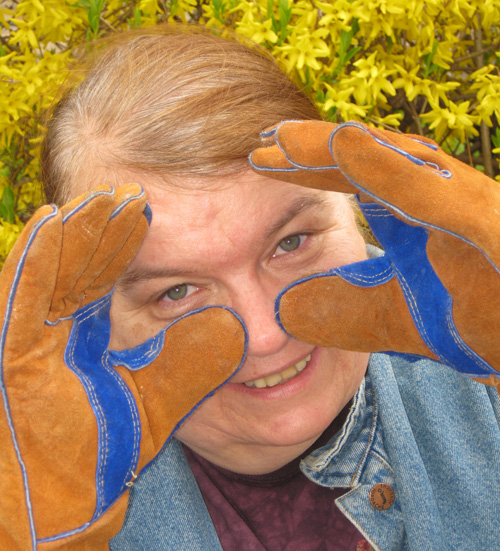 “I felt the calling to religious life,” she says. “I lived in the convent for two years, but I was not allowed to take my vows. The nuns told me I was too independent. On the Minnesota Multiphasic Personality Inventory test they made me take, I scored high on homosexuality; I’d known since I was four or five that I was gay, but I hadn’t come out to myself at that time.”

Stunned by the sisters’ decision, Donna eventually took a job as the manager of a cable company warehouse. “I moved back home with my mother,” she says. “I worked the forklift in an 8,000-square-foot-warehouse that didn’t have heat or a bathroom at a time when women weren’t doing these kinds of jobs. Then, when the warehouse was closing, the company gave me a job installing cable. I fell off telephone poles four times and was laid off when I sprained my back.”

After she recovered, Donna set about reinventing herself. She trained at a private police academy and got a job as an armed security guard. Eventually, she worked up her way up to a supervisory position. 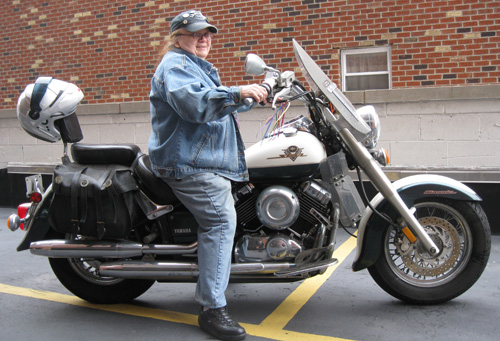 Photo by Nancy A. Ruhling
Donna rides with the Sirens.

By this time, her life partner developed Lou Gehrig’s disease, and her mother and sister also became ill. Donna took care of all of them until they passed away.

“I met my current partner online,” she says. “I had just gotten a motorcycle — a 1999 Yamaha V Star 650 in forest green and pearl — and I drove it from Ohio to New York to be with her. We’re still together.”

When Donna’s not taking care of her animals, she takes to the road with the Sirens, a group of female bikers who lead Manhattan’s Gay Pride Parade. “I feel exhilarated when I’m on the open road,” she says. 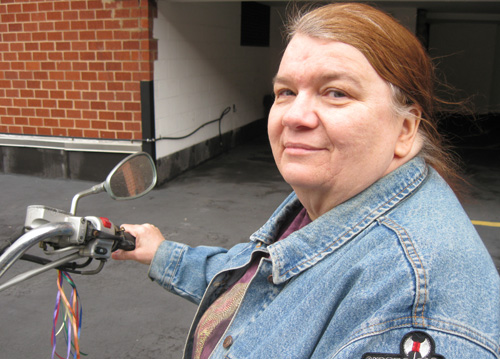 Photo by Nancy A. Ruhling
The wind in her hair makes Donna feel free.

She’s been sidelined a couple of times for off-bike injuries; earlier this year, she fell and injured her shoulder. “I feel like Humpty Dumpty,” she says. “I keep falling off the wall, and the doctor keeps putting me back together again.”

The animals have been a great comfort to her. “I’ve seen elephants cry and cats do heart massage to try to revive their owners, and I’ve touched wild bears,” she says. “The times I feel least human are when I don’t have contact with animals. They help me discover things about myself that I didn’t know.”

And what she doesn’t know right now is what she’ll be doing in the future. Recently, she was laid off from her job as security manager at Channel Thirteen. 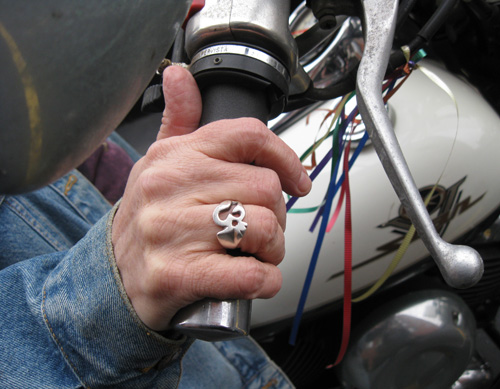 Photo by Nancy A. Ruhling
Donna started riding a motorcycle more than a decade ago.

“I’d love to work with larger wildlife at a zoo or establish a wildlife center,” she says, adding that her idol is primatologist Jane Goodall, whom she met a couple of years ago. “I could see myself with elephants, rhinos, chimps, gorillas, giraffes and hippos. I’d love to bond with a big cat.”

But right now, it is the squirrels who are most on her mind. When she first took them in, she fed them every few hours with eyedroppers, and she was on “mom duty” 24/7.

Now, her babies are crying softly in the cooler; soon, Donna says, they will start screeching. 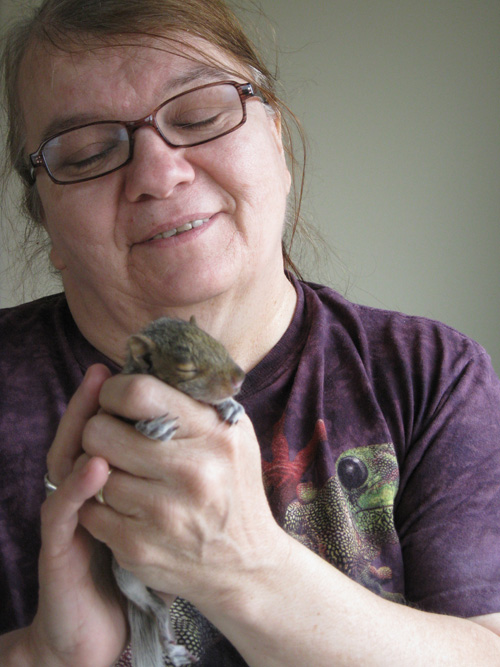 Photo by Nancy A. Ruhling
Donna revels in her role as nature’s foster mother.

So she tucks them in and zips them up in their cooler nest. She’ll only have them seven more weeks. Then, Donna will take them to what she calls “squirrel camp,” where they will be in the wild on their own.

If it saddens her, Donna doesn’t let on. She carries them to the van — she chose the cooler because it fits in the console space between the front seats.

For now, the squirrels are going to the only real home they’ve ever known — hers.