Technically, our tale starts in the summer, but turtles are slow-shuffling creatures so it makes sense that everything has come to a head in the dead of this winter of our discontented spring. 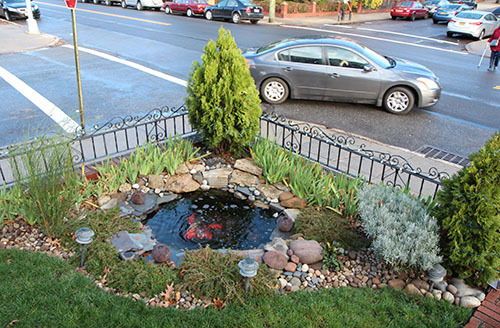 Photo by Nancy A. Ruhling
The koi pond on Ditmars Boulevard at 28th Street.

It was June or July when Ben Tostado and Christian Kolarz saw a turtle sunning itself on the stones surrounding the koi pond they built at the street-side corner of their front yard on Ditmars Boulevard.

The pond, set up three years ago, is something of a neighborhood attraction, and they are used to people stopping and staring into its waters.

This is not the first time they’ve had an uninvited visitor who decided to stay.

A while ago, someone asked permission to add two koi to the pond.

Photo by Nancy A. Ruhling
The koi in the swim of things.

Ben and Christian said yes because they figured Alice, the one they had, would like some company.

And then another fish magically appeared in the outdoor watering hole to form an aquatic quartet.

They wondered how the turtle got there, but being good hosts, they and their cute little dog, Millie, welcomed their mysterious houseguest, deciding, since he offered no objection, to call him Franklin. 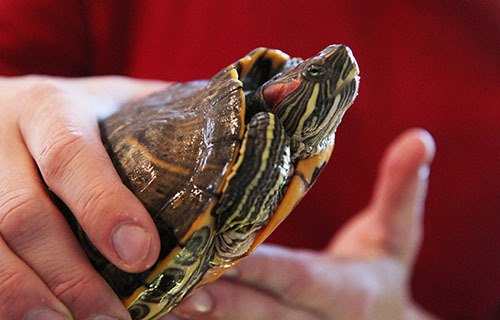 Photo by Nancy A. Ruhling
Franklin was the first.

Franklin is about the size of a saucer, and Ben and Christian learned, through no help from the taciturn terrapin, that’s he’s a red-eared slider, the most popular pet turtle in America.

So it’s highly probable that Franklin didn’t waddle into their pond on his own four webbed feet. It was a human, whose apartment or heart was too small, who tossed him into the bubbly waters.

As the months went by, Franklin, who is thought to be about 5 years old, settled in quite nicely. Turtles eat goldfish, but the foot-long Sunkist-orange koi were too big for our buddy to swallow. 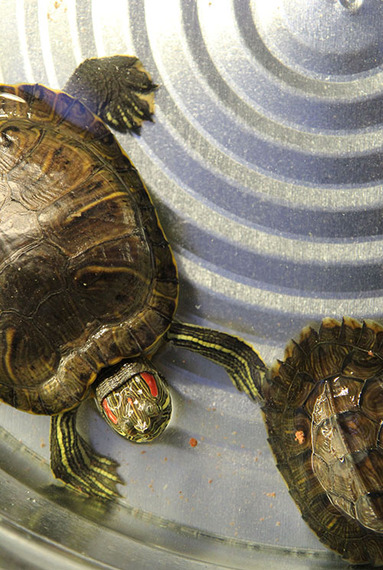 Photo by Nancy A. Ruhling
Sunning in their winter home.

He spent his days playing with Millie and frolicking in the pond, where he loves to swim against the current of the water pump and flip over and over in the sprightly spray of its jet stream.

“We trained him to come up to take food from your hands,” Ben says.

It was around Thanksgiving when turtle No. 2 showed up in the pond. 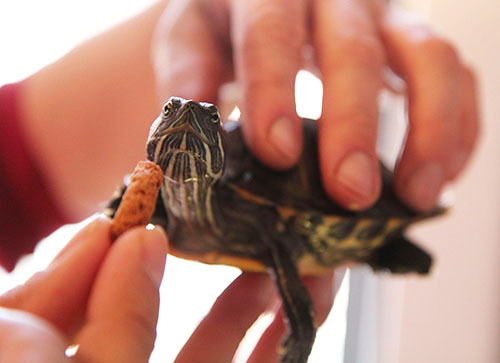 Photo by Nancy A. Ruhling
Junior gets a snack.

Ben and Christian were alarmed: Red-eared sliders can’t survive outside in the winter in manmade ponds, which is why Franklin was safe inside in an aluminum wash tub basking under the gentle glow of a special heat lamp.

To make matters worse, this little guy was half Franklin’s size. As much as they wanted to keep it, they knew that turtles can be territorial, so they quickly found a good home for it.

It wasn’t much more than a week later when Christian was cleaning leaves out of the 250-gallon pond that he found yet another turtle. 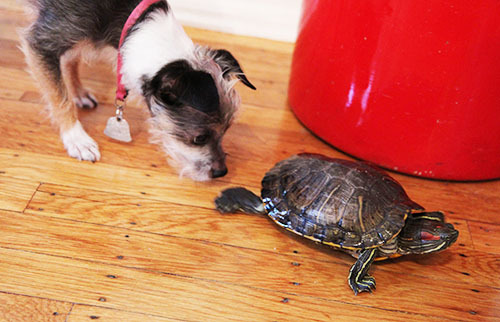 Photo by Nancy A. Ruhling
Millie and her new friend.

“It was the same size as the second one,” Christian says. “So they were probably dropped off together, and we just didn’t see it. For all we know, they were siblings.”

They couldn’t turn turtle No. 3 away in good conscience or in a prospective bad winter, so they named it Junior.

Carefully, they introduced Franklin to Junior.

To their horror, Franklin immediately climbed atop the smaller turtle. Instead of attacking, he waved his webbed hand in front of its face. This, Ben and Christian learned, is a mating ritual. 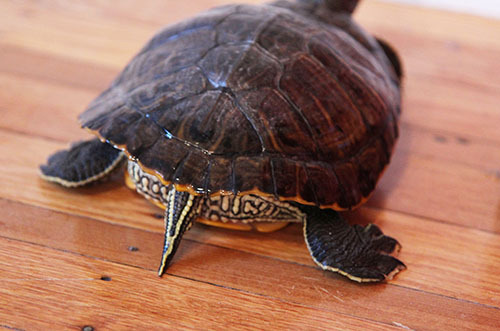 Photo by Nancy A. Ruhling
The tale’s tail end.

“It’s difficult to determine the sex of a turtle,” Ben says. “So, based on this, we figured Franklin is a male and Junior is a female.”

They hope to get Franklin and Junior a bigger winter house. They are looking for a second-hand 20-gallon or 30-gallon tank, which would be perfect especially if the turtles decide to have a family.

At any rate, Ben and Christian hope they don’t find any more turtles in the pond.

But spring, like their house, is just around the corner.