Kyle Marshall is still new at this father stuff, and he wants to make sure he’s doing a good job. 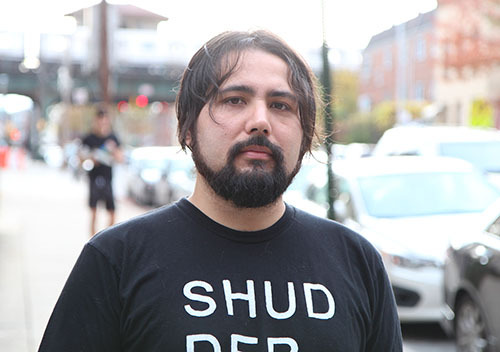 Photo by Nancy A. Ruhling
Kyle’s in the duo Monkey Pudding Face.

It’s 9 a.m. The rest of the world is up, but Cove is ready to go down. Kyle longs to hold him a little longer. He reluctantly releases the baby to the crib for sleepy time. 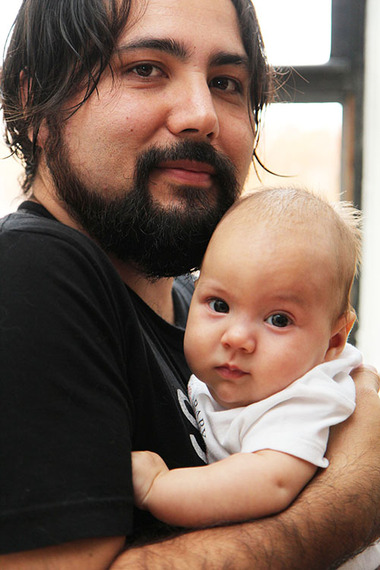 Photo by Nancy A. Ruhling
Kyle and Cove.

Cove is only 6 months old, which is about the age Kyle was when his parents divorced. He never got to know his father but felt fortunate to have a supportive stepfather.

Kyle, a soft-spoken man-boy with long black hair, was born on the Japanese island of Okinawa, which is where his father is from. His mother, an American, met her husband on the U.S. Army base, where she taught art.

When Kyle was 6, his mother married a Navy man, whose tours of duty took the family to Orlando, Florida; Yokosuka, Japan; and finally Sarasota, Florida. 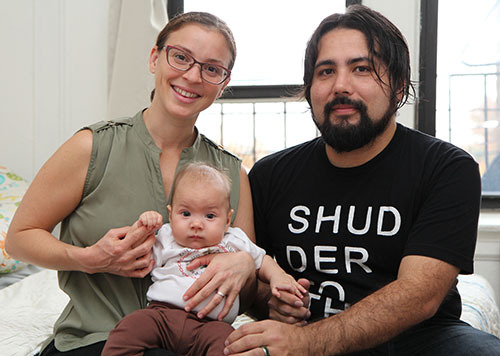 Photo by Nancy A. Ruhling
Adriane and Kyle have known each other since middle school.

“The first move to Florida put me in culture shock,” Kyle says. “From all the moving, I learned not to get attached to people. It probably was not the best way to cope with my feelings of abandonment.”

To lessen the loneliness, he learned to turn to the guitar. 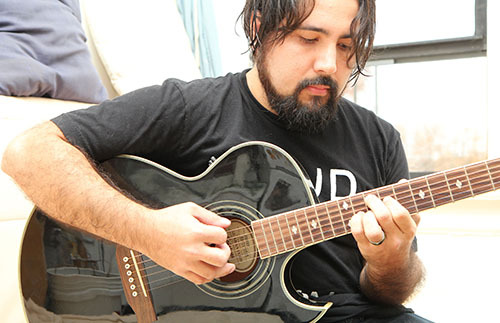 Photo by Nancy A. Ruhling
He started guitar lessons at 12.

Kyle doesn’t have to tell you that music is his muse. In his tiny two-room apartment he has made room in the living/kitchen/office space for his bass and four guitars — two acoustics, an electric and a nylon-string classical.

“When I was 12, the diving board on our pool at home broke,” he says. “My mom told me we could replace it or I could get a guitar. I was just getting into Metallica and Nirvana, so I picked the guitar.”

Kyle’s first lessons didn’t go well, so he struck out on his own.

“The teacher was interested only in the theory of music,” he says. “All I wanted to do was play what I was hearing on the radio.”

After a year, he resumed formal training, focusing on classical music in middle school then high school, where he played in bands.

“Music soon became more than a hobby,” he says. “It was my passion.” 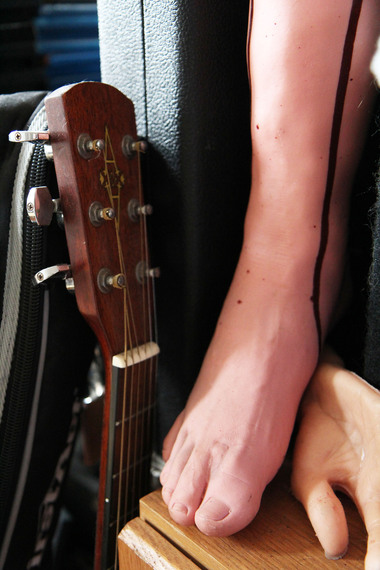 Photo by Nancy A. Ruhling
Foot and fret: Kyle likes horror flicks, too.

After he graduated from Berkelee College of Music, he made his way to Manhattan.

“I knew I had to go to either New York City, LA or Nashville,” he says. “I had visited LA and didn’t like it. Nashville is mostly about country music, and I’m more rock and roll. That left New York.”

Kyle did the play/pay trade-off that aspiring musicians are forced to do: At night, he was in a band, and during the day, he held a succession of 9-to-5 jobs. 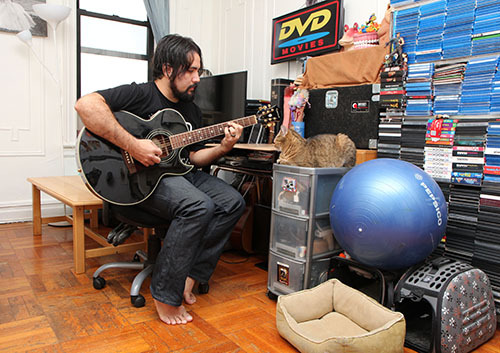 Photo by Nancy A. Ruhling
Kyle rehearses in his living/kitchen/office space.

“I wasn’t very good at playing the game of shaking the right hands and making contacts in the music industry,” he says. “I’m more of an introvert. I tend to have one to two friends instead of 200 casual acquaintances.”

Kyle’s most important friend has always been Adriane Ackroyd. They met in middle school, dated in high school and despite breakups, found themselves in the same cities at the same times.

They merged his musical instruments and her brother-sister felines, Drempels and Crumpet, and married in 2012. 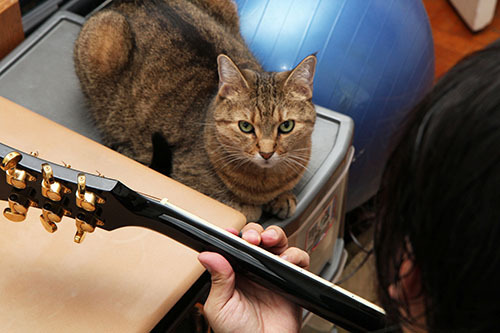 Photo by Nancy A. Ruhling
Crumpet’s a longtime fan.

“I guess that we were destined to be together,” he says.

Kyle had a steady gig at Starbucks; in fact, he was a manager. When he was laid off, he returned to music full time, touring with a band. 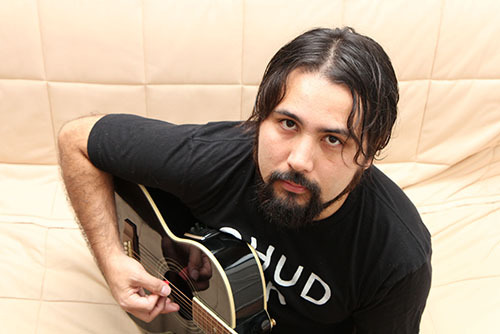 Photo by Nancy A. Ruhling
Kyle has a full-time job in IT.

Then he started selling movies and books on Amazon for extra cash. That tided him over until he got a job on Best Buy’s Geek Squad.

“It was an easy transition because IT translates back to my music because they both have electronic elements,” he says. 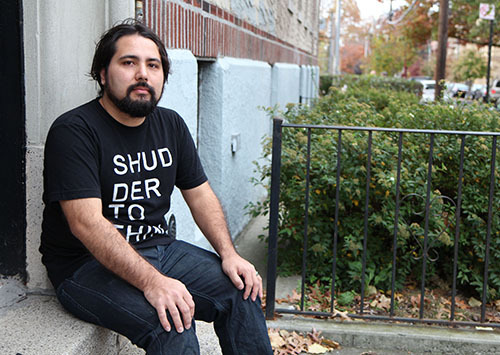 Photo by Nancy A. Ruhling
He wants to be the best daddy ever.

“I love the job, and I love the work,” he says. “It’s great to be in an environment where I’m helping people who help people.”

With Cove in day care and Adriane back at work full time as a nutritionist, Kyle is re-focusing on music.

His alternative rock/electronica duo, Monkey Pudding Face, is making YouTube music videos to promote what he hopes will become a TV show and is writing the music for Epic Pictures’ Megafoot.

“I miss making the connection with the audience when playing live even if there are only five people there,” Kyle says. “It’s funny looking into a camera and performing.” 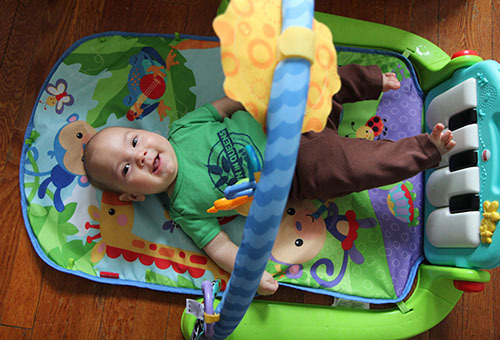 Photo by Nancy A. Ruhling
Cove composing a concert.

A couple of jangled notes that blurt out of the bedroom catch his daddy ears.

Cove is not sleeping; he’s banging his little feet on the big keys of the baby non-grand piano on his Fisher-Price Kick ‘n Play Gym.

With Adriane, Kyle stands over his son to listen to the cute concert.

“Cove is inspiring me musically,” he says, tickling the baby’s tiny toes.