Unfurling her collapsible cane, Cynthia Groopman strides toward the door of her room. Once she’s in the hallway, she feels around the lock with her fingers until she “sees” the slot for the key. 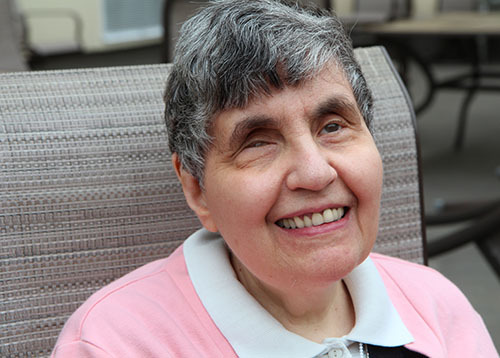 Photo by Nancy A. Ruhling
Cynthia’s been blind for more than a quarter century.

If you’ll be so good as to take her arm, she’ll give you directions to the patio. She likes to sit out there. She can’t see the sun, but she can feel its golden warmth on her face.

Cynthia, a small, all-smiles woman who’s largely independent, has been blind for more than a quarter century. She was nearly 40 when she contracted a cough. The prescription syrup the doctor gave her left her big brown eyes shrunken and sightless.

At that time, she was teaching elementary school and living with her parents in the Queensview co-op she grew up in. Her twin brother, Jacob Groopman, a noted pulmonologist, resided in the adjoining unit. 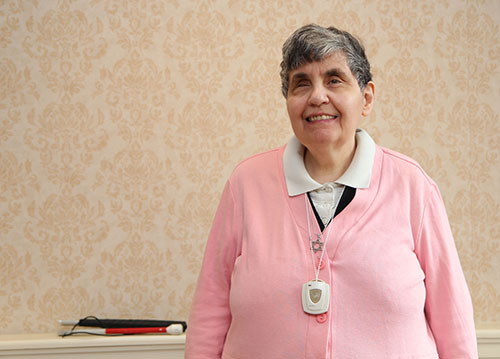 Photo by Nancy A. Ruhling
She has learned to navigate the halls of the senior center.

Although Cynthia’s sightlessness deprived her of the job she loved, it didn’t rob her of a full life.

After months of intensive rehab and studying Braille in English and Hebrew, she began taking correspondence courses in everything from Spanish to astronomy from The Hadley School for the Blind to supplement her degree from Yeshiva University.

She filled her idle hours with volunteer and church work, taking on the role of co-president and sunshine lady of the Astoria Synagogue of Israel, where she had long been a member.

As the years went by, Cynthia cared for her ailing parents until God called for them. She and Jacob, who did everything together, had their sights set on retiring to Florida, when four years ago, he, too, passed from this world. 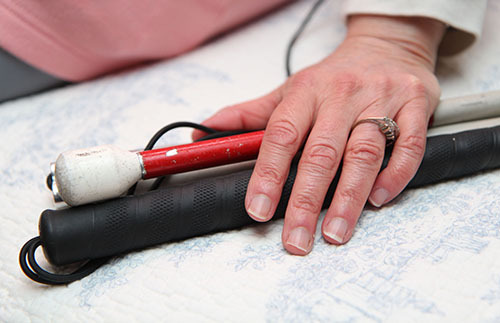 Photo by Nancy A. Ruhling
The cane gives her independence.

“I decided that I couldn’t stay in Queensview any more even though I had lived there since I was 2,” she says. “It had too many memories of my grandmother, my mother, my father and my brother. I wanted a brand-new life.”

Aside from a couple of ancient folding card tables and a kitchen chair that’s nearly as old as she is, Cynthia didn’t take anything with her.

“I had lots of plaques from my volunteer work, but I left them there,” she says, not a trace of regret in her voice. 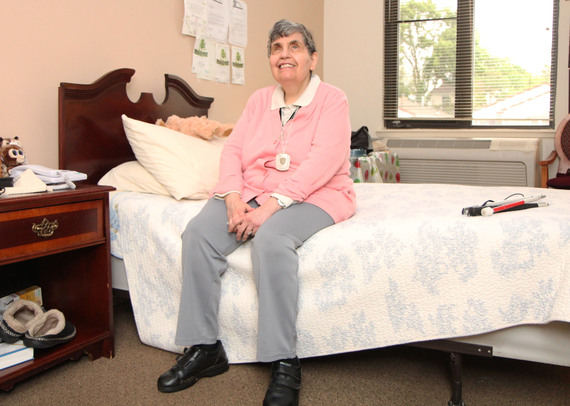 Photo by Nancy A. Ruhling
Cynthia’s room has little more than a twin bed.

She’s been living in the twin-bed studio at Brandywine Senior Living at the Savoy in Little Neck for only three years, but her new walls already are filled with certificates and awards.

“I am the only blind person here,” she says. “I had to go through several interviews to prove that I can live on my own.”

She’s proud of the fact that she can take care of herself. The only time she needs help is when she’s walking on the sidewalk or attending off-site events. 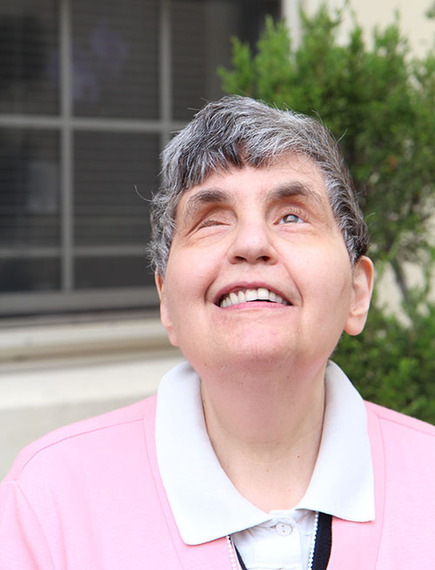 Photo by Nancy A. Ruhling
Cynthia sees the sun through the rain.

There’s a selfless simplicity to Cynthia’s life. She rises before the sun to shower, dress, pray and study the scriptures. After some stretching exercises, she reads, does homework for her correspondence courses, listens to the radio then heads to the dining hall for breakfast.

“We have assigned seats; it’s like high school,” she says.

The rest of the morning is filled with classes. Cynthia sometimes serves as the substitute teacher for the exercise and trivia sessions.

After lunch — Cynthia is the only vegetarian at Brandywine — she works the phones, checking up on the homebound and writing reports on their status. 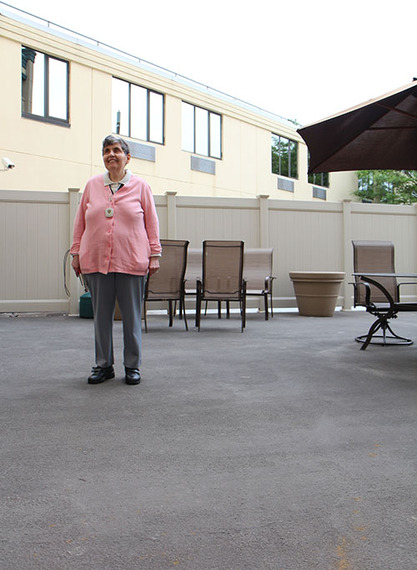 Photo by Nancy A. Ruhling
She spends her time helping others.

Sometimes, she “listens” to movies, which she finds enjoyable because “using your imagination makes every rainy day sunny.”

Once dinner is done, Cynthia cheers up several lonely Brandywine residents with phone calls. She also works on her computer and writes poetry, an avocation she took up about 15 years ago.

Saturdays, she and an escort take a taxi to the synagogue, which is a 28-mile round trip. 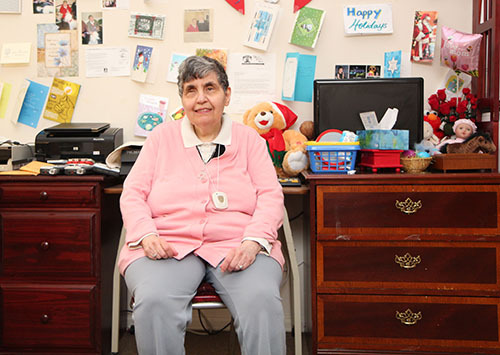 Photo by Nancy A. Ruhling
Her new wall is filled with her new life.

She used to go with John, one of the residents, but he died earlier this year. It was a special friendship: John was Roman Catholic; he went for Cynthia’s sake.

“He was like a big brother to me,” she says. “He used to give me a bear hug every time he saw me, and sometimes we would stand outside and admire the moon.”

The loss is still fresh, and it reminds her that her circle is getting smaller. She doesn’t get any visitors; her only relatives are cousins.

At night, she cuddles a Teddy bear in bed. She knows the act is childish, but it comforts her. 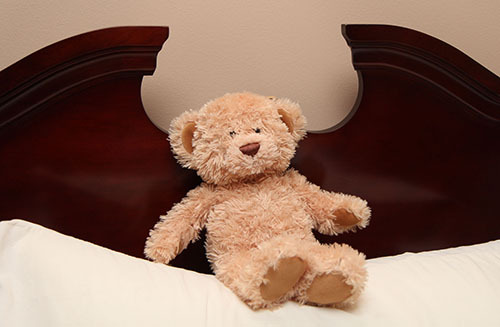 Photo by Nancy A. Ruhling
At night, she cuddles her Teddy bear.

“I’m not sad,” she says. “I believe you have to create your own happiness, and you have to be helping other people.”

It is God, she says, who gives her the courage to go on.

“I speak with Him every day,” she says. “God has plans for every one of us. We don’t know what life’s about; it’s yours to make the best of it. The most important thing is what’s in your heart.”

She unfolds her cane for the walk back to her room. It’s a beautiful day, and she has much work to do.