Minnie Daddario places a plate of pizzelle on the table. There aren’t many people who make the Italian snowflake-shaped cookies any more. Minnie thinks that’s a shame. 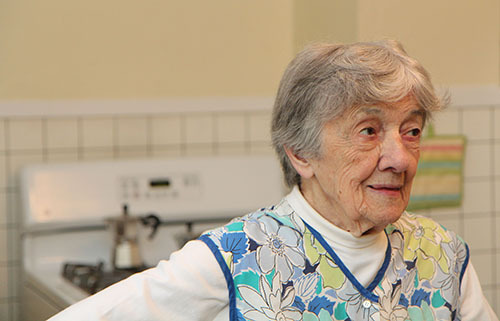 Photo by Nancy A. Ruhling
Minnie is a very young 89.

Because it’s so easy. All you do is mix the ingredients — flour, eggs, sugar, baking powder, butter and anise — and spoon the pancake-like batter into an electric press that is similar to a waffle iron.

Close the lid, count to 30 and, presto, you have a pair of pizzelle. With this process, Minnie can produce 50 of the crispy potato-chip-thin cookies that taste like ice cream cones in an hour or so.

It wasn’t always so swift. When her mother-in-law gave her the recipe 67 years ago, Minnie, whose stature lives up to her name, had to hold a heavy, long-handled cast-iron press over the flames of a gas stove to cook them. 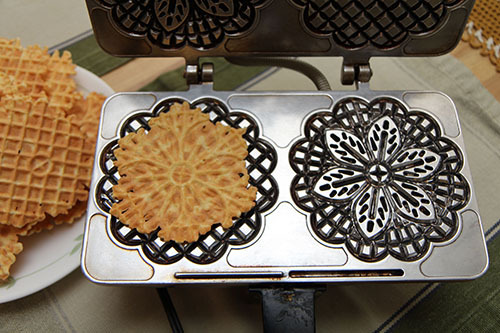 Time is and isn’t a big issue for Minnie. She has more of it since she retired three years ago, but she has less of it because she’s nearly 90.

Leaving the undergarment factory where she worked as a seamstress and packer for nearly a half century was not her idea. A stroke forced her to quit. 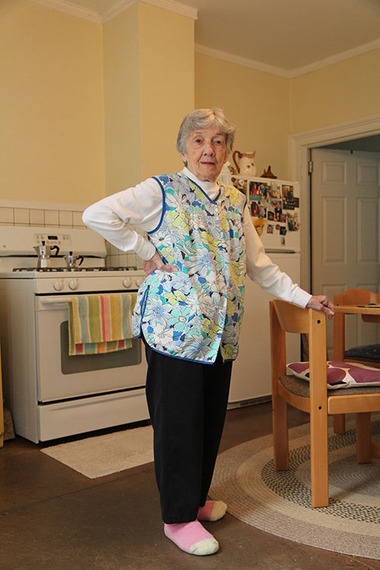 Photo by Nancy A. Ruhling
Minnie loves to cook and clean.

“I’d like to go back even if it is only part time,” she says, adding that it would be easy to do because the factory is right around the corner and Barbara works there. “I miss the company of my co-workers.”

The factory wasn’t Minnie’s first job. Right after high school, she did office work for MetLife in Manhattan.

Her Italian immigrant parents, who had come to Astoria from Hibbing, Minn., when Minnie was 2, had a hard time supporting their four children.

“I raised my sister, who is 12 years younger than I am, and I gave them my paycheck,” Minnie says. “I remember buying them a TV and some furniture.” 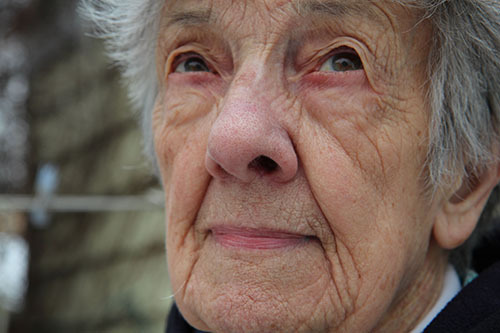 Photo by Nancy A. Ruhling
Ninety? She can’t believe she will be that old.

Before long, Minnie married a neighborhood boy. When her first child, Barbara, was born, Minnie stayed home to raise her and didn’t re-enter the workforce until her second child, Tom, was 6.

This was fortunate as a decade later and three decades after their wedding, Minnie’s husband, a stubborn smoker, succumbed to lung cancer.

The family lived next door to Minnie’s in-laws on a plot of land on 27th Avenue that houses two homes. They have never left. Minnie and Barbara share the two-bedroom cottage, and Tom is in residence in the larger, two-family house. 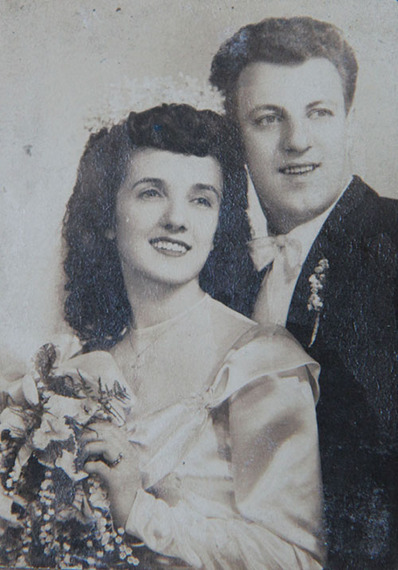 Photo by Nancy A. Ruhling
Minnie on her wedding day in 1948.

They get along as amicably as mothers and daughters are meant to.

“Barbara and I do fight,” Minnie says. “But we always make up.”

Barbara smiles. She, too, endorses the arrangement that has been in place her entire life.

“Despite my mom’s advanced age, she has always been very modern in her thinking,” Barbara says. “In many ways, she is old-fashioned but at the same time very accepting of the modern world. We have always been like girlfriends as well as mother and daughter.”

Although everybody agrees that Minnie is perfectly capable of living alone and liking it, having Barbara with her brings great peace of mind to the family. 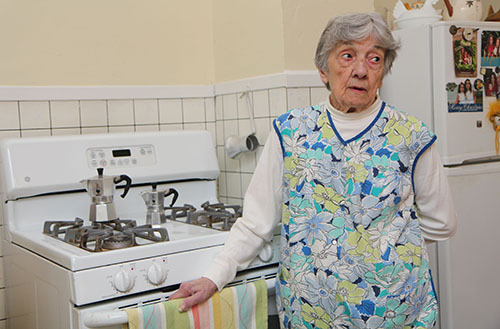 Photo by Nancy A. Ruhling
Minnie worked until she was 86.

Minnie’s days are pretty packed. She spends most of her time cooking and cleaning and taking care of Ben and Jerry, the cats. Oh, yes, and she feeds the birds and squirrels.

“I feel guilty if I eat breakfast before they do,” she says.

Minnie’s not really sure how she got to such a great age in such great shape. She takes a handful of pills for minor issues that include blood pressure and cholesterol. 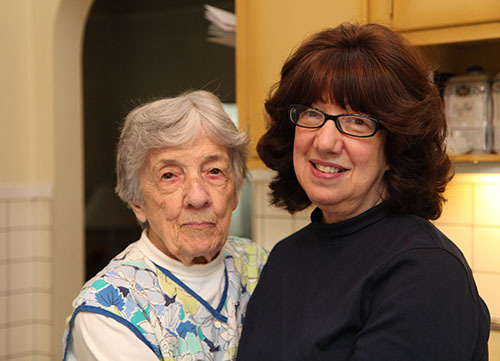 Photo by Nancy A. Ruhling
Minnie and Barbara have always lived together.

She and Barbara, sometimes with Tom, go to the gym two to three times a week. Minnie pedals the stationary bicycle and lifts weights.

“I can do five pounds in each hand,” she says proudly. “Did I tell you that I was the captain of the girls’ high school basketball team?”

Barbara points out that this was quite an accomplishment because during the World War II years, young women didn’t take sports seriously. 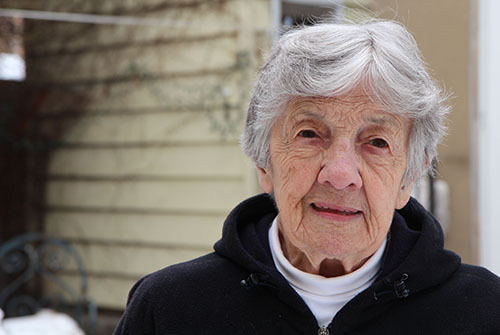 Photo by Nancy A. Ruhling
She wants to go back to work.

This reminds Minnie that she wants to go bowling. No matter that she hasn’t stepped foot in an alley for 15 or 20 years. She’s raring to throw the ball again.

Barbara promises to take her.

At any rate, Minnie believes that her early years of exercise prepped her body for old age. She knows this because, even after the stroke, she hasn’t really slowed down. 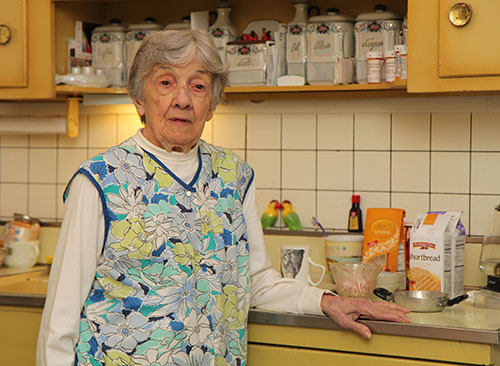 Photo by Nancy A. Ruhling
As Barbara can attest, Minnie is still a dynamo.

“I’m never tired,” she says, adding that she’s apt to take a short afternoon nap, but that has nothing to do with her age. Barbara does, too.

Minnie is pretty satisfied with how things turned out. Wife, mother, working woman, she has had it all.

Wait, there is one thing she never got a chance to do. She always wanted to open a day-care center. 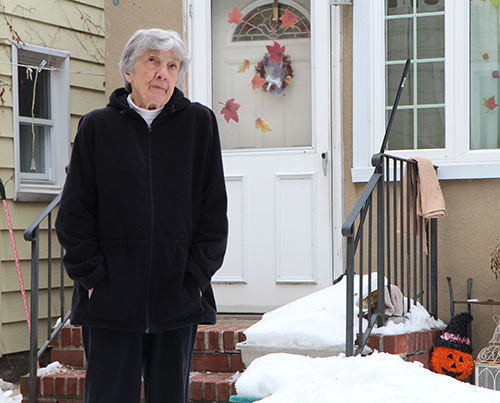 Photo by Nancy A. Ruhling
Minnie’s ready to face the new day.

It occurs to Minnie that she could still look after a baby or two. She asks her daughter what she thinks about the idea.

The occasion will be marked with a small family party.

Minnie will bring the pizzelle.