“I’m not used to posing as a boy,” says Travis Barr. 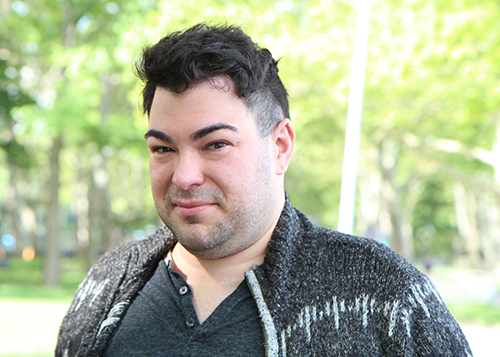 Photo by Nancy A. Ruhling
Travis as himself.

Burly and black-haired, he’s standing along the waterfront at Astoria Park looking uncomfortable in his sweats and sneakers while staring into the camera’s naked eye.

What should he do with his hands? How should he stand? Where should he look?

Anita Buffem, the brassy buxom blonde he plays in a variety of venues, would know how to pose.

So Travis turns things over to her.

Photo by Nancy A. Ruhling
Travis as Anita.

Larger than life in mile-high stilettoes, leopard-print bathing suit and rhinestone cat-ear tiara, she grabs the rail at the water’s edge and dazzles the world with her showgirl smile.

She allows the breeze to play peekaboo with her screaming-green beach cover-up.

She looks like Marilyn Monroe standing on that subway grate. 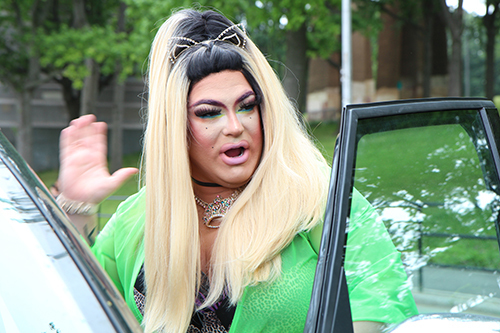 It is, she says, her star power.

Travis created Anita, aka The First Lady of Astoria, nearly a decade ago, and they have been inseparable ever since.

It was a spur-of-the-moment decision that neither has ever regretted. 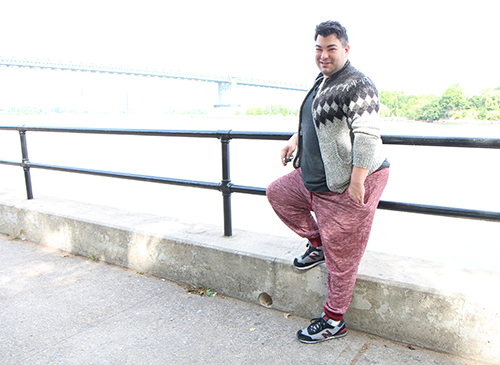 Photo by Nancy A. Ruhling
Travis grew up taking care of others.

Travis, who grew up in the tiny town of Cazenovia, New York, learned at an early age to take care of others.

“My dad walked out when I was 5,” he says, adding that his brother is younger. “My mother had polio and didn’t have full use of her arms. She also had a limp. By the time I was in high school, she was using a wheelchair.”

Anita, by contrast, has always lived in the lap of luxury. She’s used to having people like Travis wait on her. 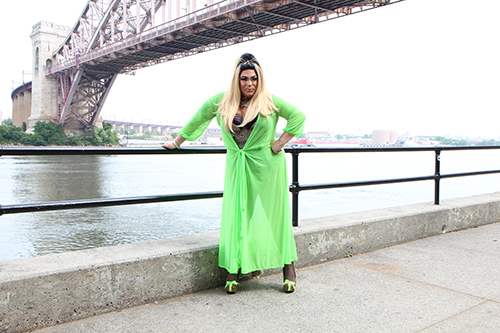 Photo by Nancy A. Ruhling
Anita grew up being waited on hand and stiletto.

Travis knew he wanted to be on a stage.

Anita never had to audition for anything. Her life is her stage.

Travis’ high school discouraged his theatrical ambitions. So did college, where he focused on general studies but didn’t stick around long enough to graduate.

Instead, he came to Manhattan to audition for Popstars, the precursor to American Idol. 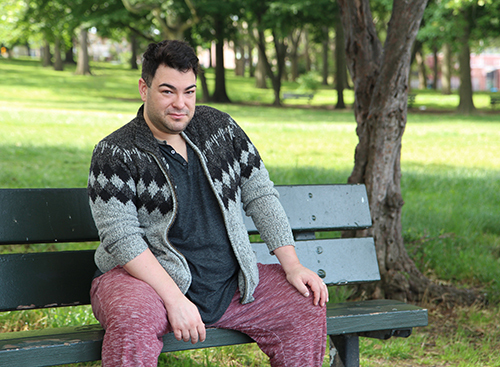 Photo by Nancy A. Ruhling
Travis came to New York for an audition.

Although he didn’t end up in the made-for-TV band, his performance caught the attention of a talent rep.

He moved to Astoria in 2004 with his best friend to reel in the offers. 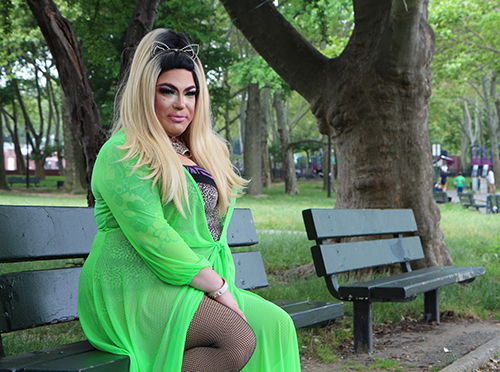 Photo by Nancy A. Ruhling
Anita started out as a podcast character.

In the meantime, he created a podcast that starred several characters, including Anita.

“She was originally supposed to be an Italian aunt from Astoria,” Travis says. “She was innocently ignorant, politically incorrect and so over-the-top embarrassing that you couldn’t help laughing.”

Her funny name is one he plucked from his past. 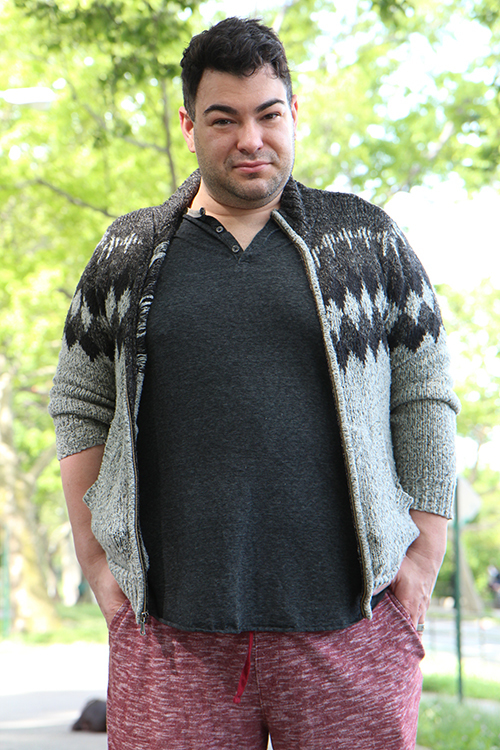 Photo by Nancy A. Ruhling
Travis doesn’t know how to pose as a boy.

“I used to work in a mall in Syracuse, and there was a hidden bank for the merchants to deposit their money,” he says. “There was only one teller – Anita M. Buffem. She was all by herself, and I was super nice, but she never cracked a smile. The name just came to me.”

As Anita and Travis got to know each other, she picked up more of his personality, becoming hipper and showier, all the while preaching love and positivity.

She really came into her own in 2008 when Travis was asked to host an event as Anita.

“I had never done drag before,” he says. “So I threw on some clothes and put on some lipstick. I was a hot mess, and people loved it.” 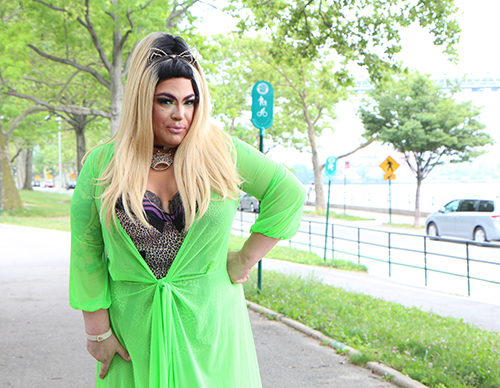 Photo by Nancy A. Ruhling
Anita enjoys being a girly girl.

Soon, everyone was asking for Anita, and she was showing up at bridal showers, bachelorette parties, at-home bingo games and makeup events.

It isn’t easy being Anita. It takes Travis five hours to transition from him to her. 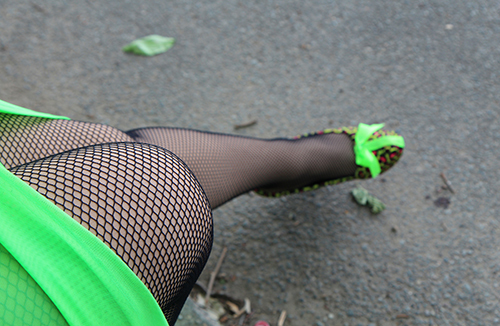 Photo by Nancy A. Ruhling
She’s got legs!

“It’s time-consuming, but it’s also creative,” he says. “It’s like gardening – I can’t wait to see the flowers come up.”

Anita has a sizable wardrobe: Her stuff fills four drawers in a plastic dresser Travis bought at The Home Depot.

“People expect her to wear something new every time,” he explains.

Travis’ clothes fit quite nicely into two drawers of a chest he shares with his significant other.

“She’s not as draggy as most drag queens,” he says. “She’s more like that super-tacky girl you see walking down Steinway Street. She buys her stuff at real-girls shops, some of them on Steinway. Animal prints and bright colors are her signature.”

“I’ve had people coming up to me after shows saying, ‘You make me feel so inspired, and your message of love is what is needed right now,’” Travis says.

Travis and Anita are having such a good time together that they hope the fun never ends. 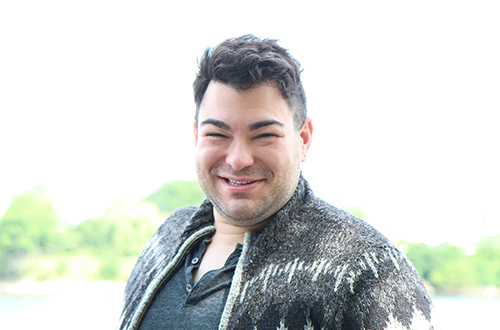 Photo by Nancy A. Ruhling
He loves making people happy.

“My family keeps saying to me, ‘One day, you’re going to make it,’” Travis says. “But I’ve already made it because I’m paying my bills and I’m doing what I love.”

Last year, Travis made a TV pilot featuring Anita. It didn’t get picked up.

But you never know; it could lead to something bigger than Anita’s big hair. 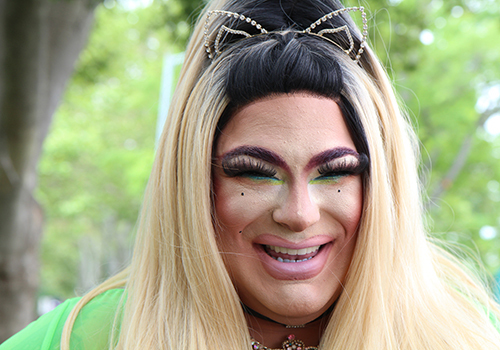 Photo by Nancy A. Ruhling
She’ll make you smile.

Travis wipes Anita’s makeup off his face and puts her spare parts in his backpack.

Wigless, he walks to his car in shorts, flip flops and a baseball cap. His toenails remain painted New York black.

As he gets behind the wheel of his forest-green Fiat, he covers Anita’s eyelashes with his big sunglasses and drives off into traffic.