There are 927 entries, including the daily specials, on the menu at the Bel Aire Diner.

Photo by Nancy A. Ruhling
The Bel Aire Diner on 21st Street at Broadway.

I didn’t count them all. I took Kal Dellaportas’ word for it.

He knows the exact number by heart not because he eats nearly every meal here (which he does) but because he has studied the spreadsheets from the moussaka to the meatloaf. 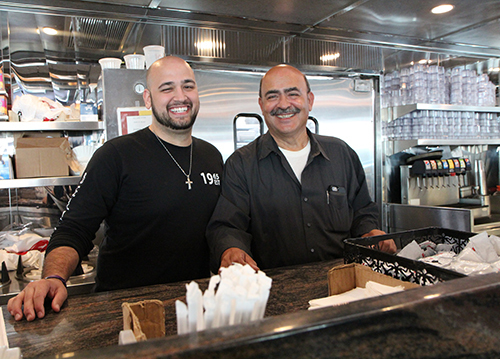 Photo by Nancy A. Ruhling
Kal and his father, Archie, at the front counter.

“I have no idea why it’s not a round number like 1,000,” he says. “The only way a diner works is to have everything, so we keep coming up with new recipes to use things in as many ways as possible.”

Kal’s family owns the Art Deco-style diner, and if you sit here long enough while you’re chewing over your 927 choices, you’re likely to meet him, his father, Archie, his mother, Patricia, his brother, Peter, and his sister, Theoni. 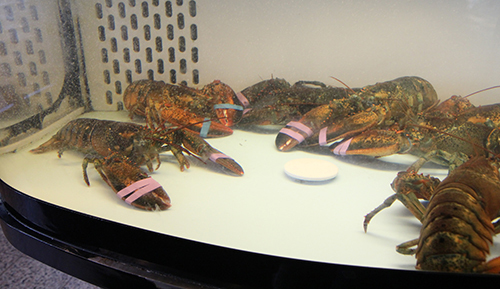 Photo by Nancy A. Ruhling
Dinner taking a swim.

“It’s a diner so we don’t have formal titles,” he says. “I guess, based on what I do, you could say that I’m the chief operating officer.”

Archie, who is standing behind the order counter, is from the Greek island of Cephalonia. He came to New York City when he was 17 and got a job washing dishes in a restaurant. 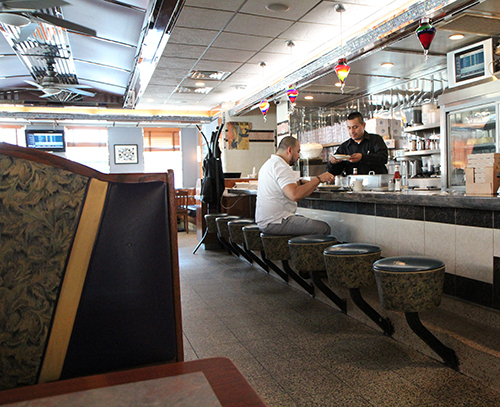 Photo by Nancy A. Ruhling
Getting comfort food from the counter.

He didn’t know how to speak much English, but he did know how to work hard, which is how he got the Bel Aire.

Archie met Patricia, who is from Brooklyn, on a blind date. They married six months later and settled in Astoria. He continued working in restaurants. 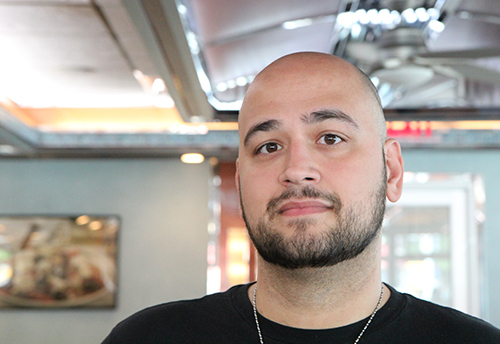 Photo by Nancy A. Ruhling
Kal started helping his dad out at age 7.

When Kal was 12, they bought the Bel Aire Diner.

“From the time I was 7, I used to go to work with my dad to observe him,” he says. “I started working as a busboy at my uncle’s restaurant in the Bronx on weekends when I was 10. I was more like a mascot than an employee.”

Kal, a tall man with a shaved head and the build of a bull, pulled steady shifts at the Bel Aire through high school and during his two years at St. John’s University. 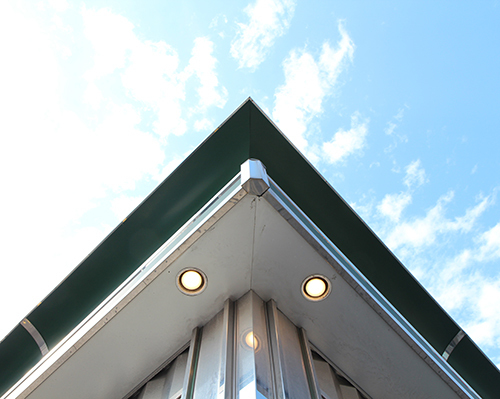 Photo by Nancy A. Ruhling
An Art Deco–style detail.

He never considered a different career.

“Because I was in it from such a young age, it came easily,” he says. “After I took a three-month course at the French Culinary Institute, I liked it even more.” 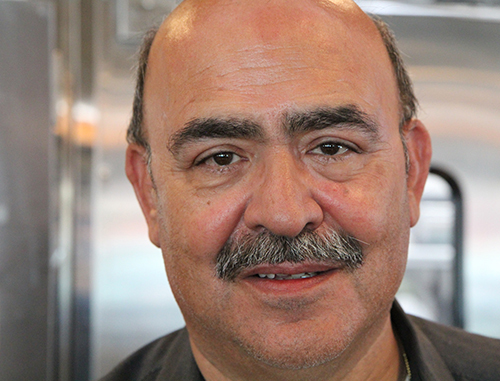 Photo by Nancy A. Ruhling
Archie came to New York at 17 and worked as a dishwasher.

That’s why he’s at the Bel Aire seven days a week.

“I do take a sporadic day off,” he says, apologizing. “When my dad bought it, he did most of the heavy lifting and worked 18-hour days, seven days a week for the first five years or so. I only do one 12-hour day. I’m mostly here 9 to 5. But we are open 24/7, and something always goes wrong. I’ve gotten calls at 2 in the morning about things.”

Kal says that his parents took a “big chance” on the diner. “It wasn’t very busy, and it hadn’t been updated since the day it opened in 1965,” he says. 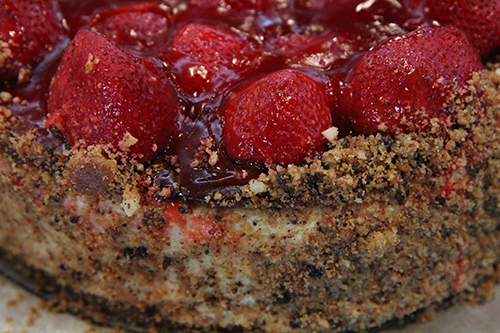 Photo by Nancy A. Ruhling
The Bel Aire is known for its cheesecake.

They have renovated it twice, enlarging it and transforming it into the Art Deco-style stainless steel icon that sits like a king on 21st Street at Broadway.

Under their ownership, it has earned top spots on several “best-of” lists, and some 5,000 people place orders each week. 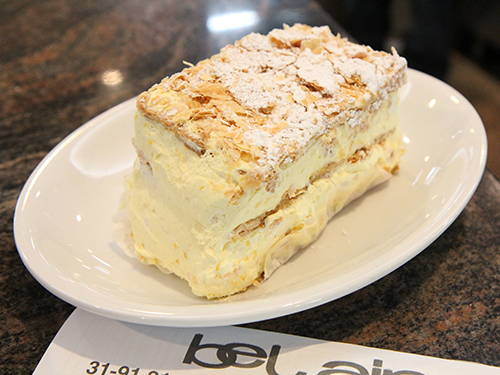 Photo by Nancy A. Ruhling
Kal’s brother, Peter, is in charge of desserts.

The most popular items on the 927-count menu, which is constantly evolving, are the burgers and cheesecakes.

“The cheesecake recipe is my dad’s,” Kal says. “The rest of the dessert recipes are from my brother.” 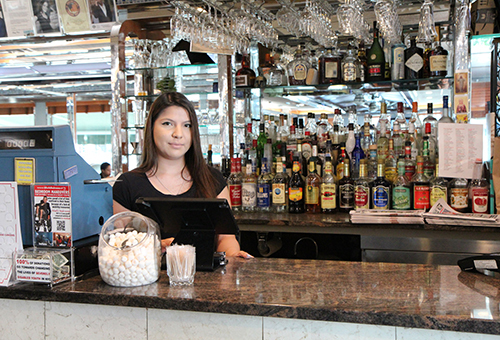 Kal hasn’t tried all of the 927 items on the menu. At least he doesn’t think so. 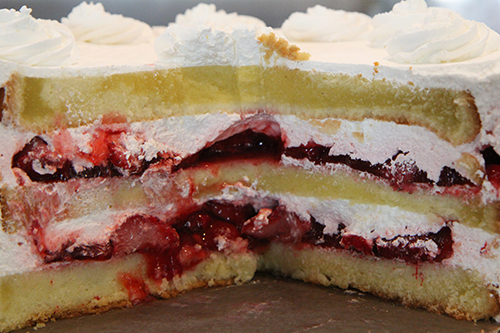 Photo by Nancy A. Ruhling
Hungry? Try the layer cake.

He’s partial to the chicken souvlaki and chicken pot pie.

Twenty years is a long time to keep eating at the same place. Kal doesn’t agree or disagree. 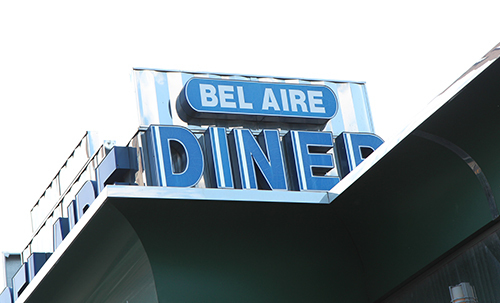 The booths are starting to fill up.

It reminds Kal that the diner is due for another renovation.

“There has been talk of a roof café,” he says. 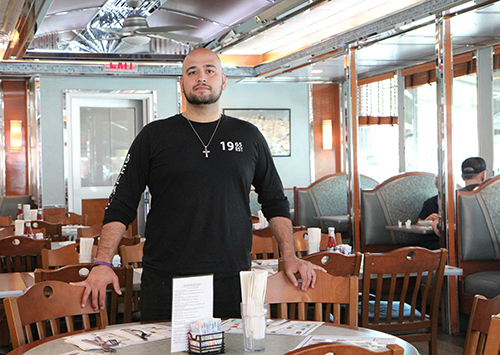 Photo by Nancy A. Ruhling
Kal, at your service.

These plans will take about two years to put into effect, but there’s no rush.