Even if you and your car wanted to, it’s impossible to pass by Astoria Auto Detailing Center without gawking.

Amid the boring brick buildings of the block, it presides, in construction-cone orange and caution-light yellow, like a psychedelic peacock.

Photo by Nancy A. Ruhling
Astoria Auto Detailing Center is at 42-09 31st Ave.

You have no choice but to slow down and watch the workers hand wash and wax the cars in a complex choreography set to the siren sound of Latin pop songs.

Their soap-and-shine water ballet plays out against a backdrop of murals that sport classic cars, automotive logos, and because this is New York, the Statue of Liberty and the Empire State Building. 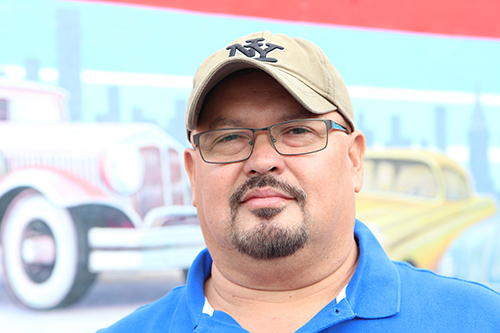 Photo by Nancy A. Ruhling
Joaquin is from El Salvador.

When Joaquin Maza opened Astoria Auto Detailing Center in the three-bay mechanic’s garage six years ago, it didn’t announce itself so boldly.

It was a respectable, old-lady grey.

Three years ago, when it was time to repaint, he hired artist Jaime Obando to add some pizazz. 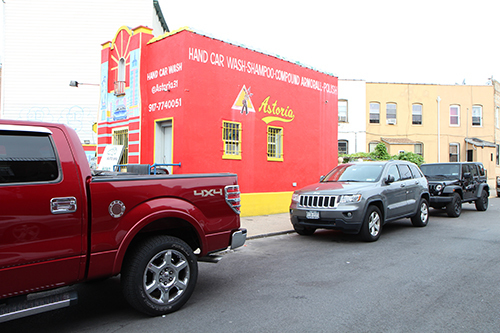 Photo by Nancy A. Ruhling
People often stop by to shoot selfies.

“I told him I wanted to show the evolution of the car from 1935 to the present,” Joaquin says. “I said I wanted people to see me. When we went to Home Depot and he picked out orange and yellow paint, I was freaking out.”

Joaquin, who is bold and bald and always ready to shake your hand, laughs at his hue hesitation.

“When it was done, everybody started talking about it,” he says. “People sometimes stop by just to take photos.” 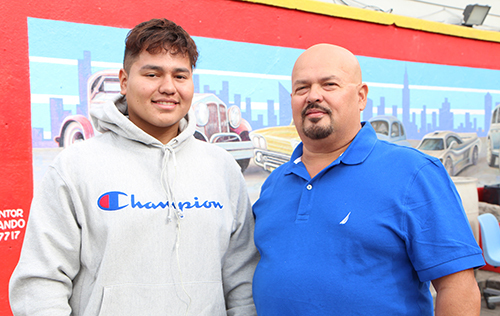 Photo by Nancy A. Ruhling
Joaquin Jr. manages the shop on Sundays.

Astoria Auto Detailing Center, a day spa for dirty cars that attracts drivers from as far as Long Island and Staten Island, is not Joaquin’s first business.

At one time, he co-owned a bar and a nightclub in Astoria as well as a restaurant in Manhattan. And before that, he drove and owned a Medallion taxi.

Joaquin, who is from Santa Ana, the second largest city in El Salvador, comes from a mom-and-pop-business family. 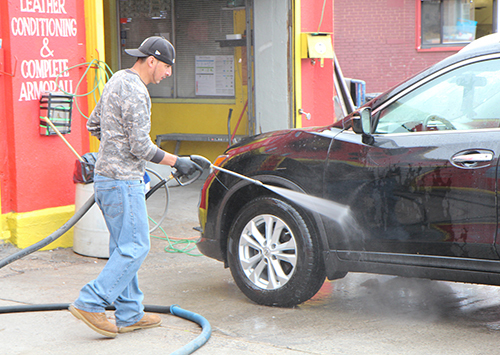 Photo by Nancy A. Ruhling
The ballet of the bath.

His parents owned a grocery store, and he grew up in the back.

At 8, Joaquin started helping out at the counter and cash register, and by the time he was 11, he was working as a manager in his uncle’s restaurant after school.

When he was 18, he traded that job for one at his uncle’s gas station while he went to college. 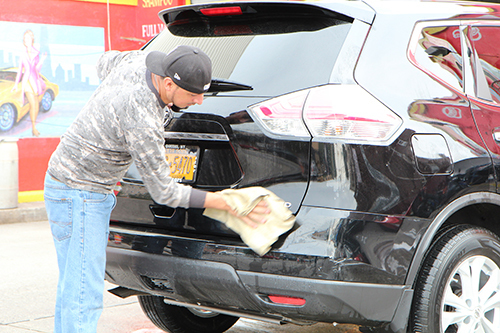 Photo by Nancy A. Ruhling
A clean wipe.

“I was attacked and the country was very violent, so I decided to come to New York City,” he says. “My mother and one of my three sisters were already here.”

Although English was a required course in high school, Joaquin never attended the classes. 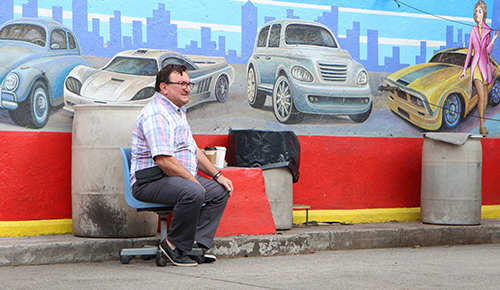 Photo by Nancy A. Ruhling
Watching the washing and waxing.

“They were at 7 in the morning,” he says. “I never got up in time. I could not even say ‘hi.’ The teacher told me, ‘I feel very sorry for you because I know for sure you’re never going to learn the language.’”

Joaquin is grinning. He tells his story in flawless English. 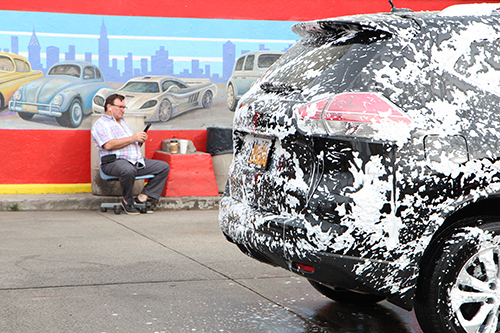 Photo by Nancy A. Ruhling
All soaped up.

“When I came here, I worked as a food delivery boy, and I picked up English in three months,” he says. “I never took any classes.”

Joaquin was advised that the best way to get a job was to get good grades or a great referral. 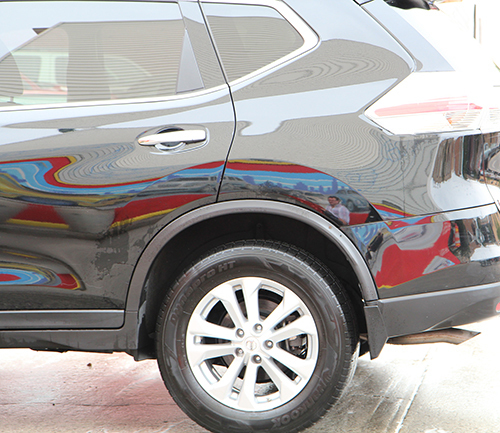 Photo by Nancy A. Ruhling
Look, you can see yourself.

“But I didn’t know anybody here or have any social relationships,” he says. “I went to college to learn how to repair computers, and I made sure I had good grades. I had a 3.7 or 3.8 grade-point average.”

It wasn’t enough, however, to keep Joaquin in school. 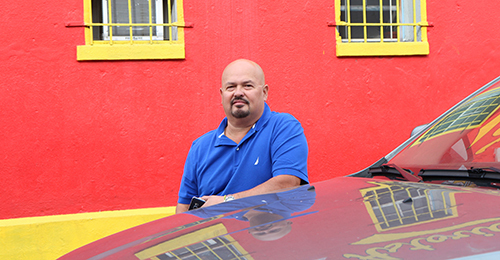 Photo by Nancy A. Ruhling
Joaquin used to co-own a bar, nightclub and restaurant.

He was more interested in working, especially after he married Cynthia, a woman from Mexico who was a waitress in a restaurant two blocks from where he was living.

Joaquin never planned to open an auto-detailing shop. Indeed, he didn’t know anything about that kind of work. 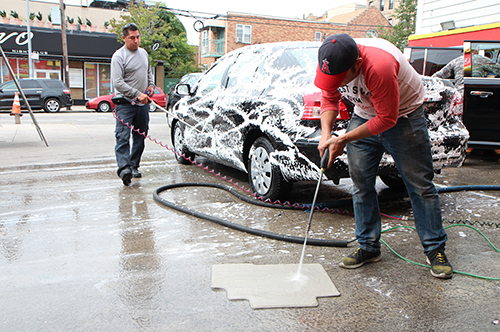 Photo by Nancy A. Ruhling
A choreographed cleaning.

“When I walked out of the bar business, I was running out of cash,” he says. “I needed to do something, and a friend suggested this. I had to teach myself the business.”

Up until recently, Joaquin worked at Astoria Auto Detailing Center seven days a week from 9 a.m. until midnight.

“We open at 7, but the mornings aren’t always busy, so I come after I drop my 11-year-old daughter, Sofia, off at school,” he says. 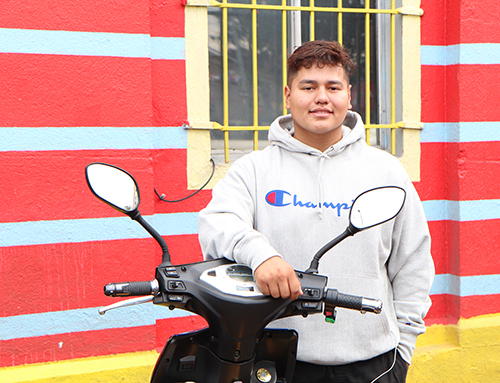 Photo by Nancy A. Ruhling
Joaquin Jr. wants to go to college and join the family business.

Joaquin’s favorite car is a Maserati, but he plays daddy chauffeur in a silver Toyota Sienna minivan that doesn’t always shine.

“I don’t get the car washed too much because the shop gets too busy,” he says. “I spend a lot of time with my customers.”

Joaquin’s 16-year-old son, Joaquin Jr., manages the center on Sundays and fills in when he finishes classes at Bryant High, where he is the captain of the volleyball team. 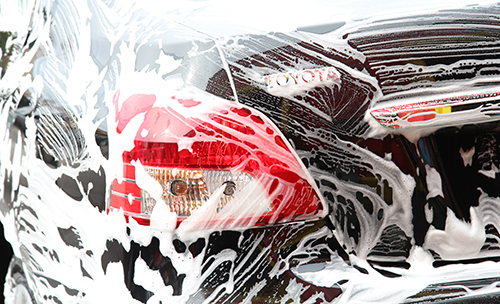 Photo by Nancy A. Ruhling
Waiting for a shine.

He started helping out when he was 12.

“He’s like my best friend,” Joaquin Sr. says. “We always talk, and he gives me ideas about how to proceed with my business.” 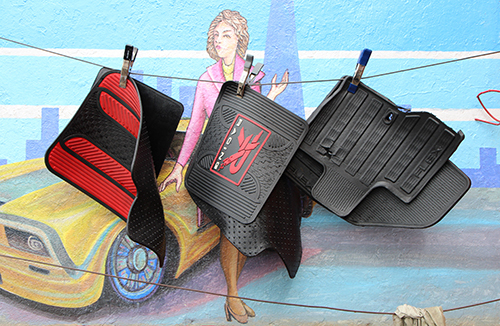 Photo by Nancy A. Ruhling
Mural and mats.

“After I finish college,” he says. “I’m going to come back to run the business and expand it.”

Joaquin Sr. says that sounds good to him.