“Every day is Halloween for me,” says Suzie Sims-Fletcher. “I always dress in a different costume.” 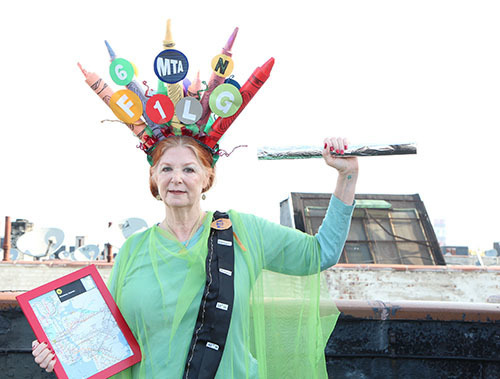 Photo by Nancy A. Ruhling
What Suzie’s wearing today for Halloween: her Lady of the (Subway) Lines costume.

Right now, Suzie, who also answers to suzQ, is wearing tones of teal and turquoise and a black, blue-dotted jumpsuit. Tonight, for trick-or-treat, she’ll really go out all.

She made the jumpsuit to celebrate the 80th birthday of her mother, Dorothy, who goes by Dottie or Dot. Dots for Dot. Get it?

“When I was young, she used to wear this itsy-bitsy blue polka-dotted bikini, and she used to paint rocks,” Suzie says. “Her tagline was Spots on Rocks by Dot.”

But the jazzy jumpsuit isn’t all about Suzie’s mother. 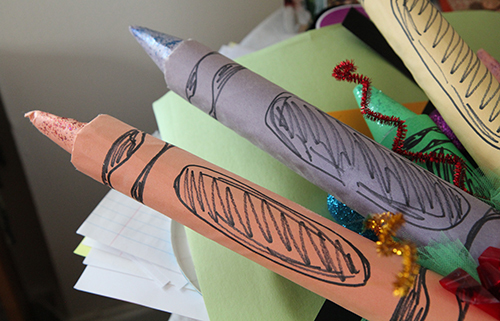 Photo by Nancy A. Ruhling
A detail of Suzie’s Crayola crown.

“The pattern of my fabric looks like roads,” she says. “It reminds me of travel.”

Suzie, who began her career as a college instructor and now is an executive communications consultant, has lived in and traveled to a lot of places, including England, China, Turkey and Bhutan, and the trip to her closet takes her around the world.

The editor of the book The Sonam Stories: Narratives of Childhood in Bhutan, Suzie has clothes from that country, Nepal, India and Pakistan as well as the corner thrift store and the exclusive shop that’s stored in her imagination. 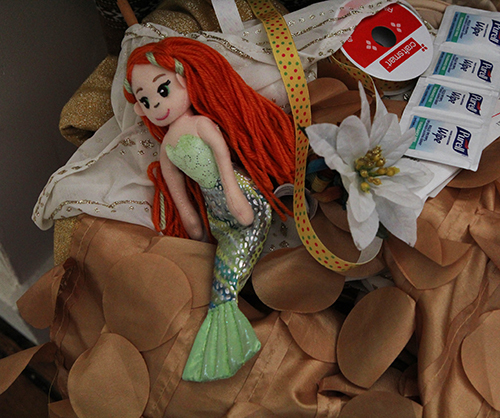 Photo by Nancy A. Ruhling
Every corner of Suzie’s apartment is filled with inspiring objects.

There’s something for every occasion, and if there’s no event, Suzie manages to create one.

She has pirate, pumpkin and princess dresses. Let’s see. What else is there?

She holds up what looks like an ordinary red-and-white-checked shift. 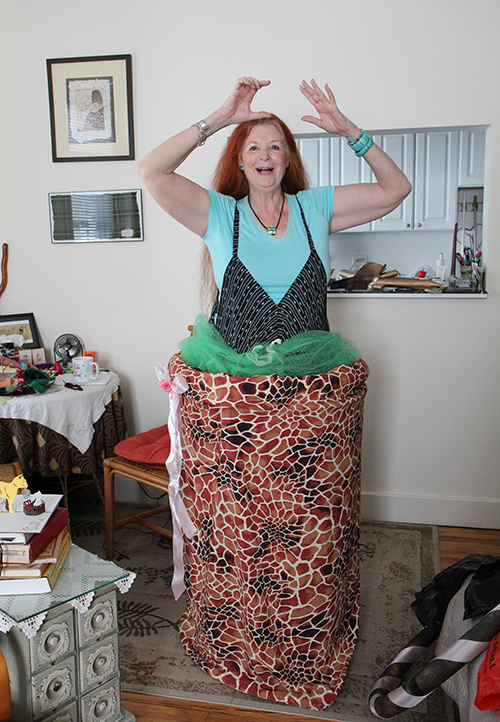 Photo by Nancy A. Ruhling
Suzie models the bottom of Penny, the Mermaid of the Well.

“This is my picnic table dress,” she says. “I wear a wooden watermelon necklace with it. It’s just so summery.”

These daily theme costumes are not to be confused with the more elaborate, eccentric outfits Suzie wears to Burning Man and the Easter, Halloween and Mermaid parades.

When she was Goldie, the Queen of the Mermaids in Coney Island, she wore a gold gown and a glittering crown made of cardboard paper towel rolls.

Suzie, who is six feet tall in her bare feet, places the crown on her head, unleashing her Rapunzel-long locks from the prison of their demure bun, which is held in place with a chopstick. 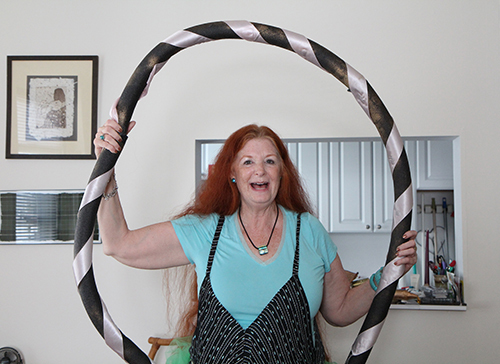 Photo by Nancy A. Ruhling
A new top transforms the costume into an Easter Bunny basket.

They are carrot red; dancing down her back in the bright sunlight, they look like flickering forest-fire flames.

On Election Night 2016, she awaited the returns as Uncle Sam’s Aunt Suzie, who was wearing a red-sequined top hat (it’s ex-Rockettes and weighted so it doesn’t fall off when you kick up your heels), blue sunglasses, white tux tails, a red skirt and a blue blouse.

She’s excited about a bear costume in teal she concocted for a character she calls Bearoness, who is half mermaid and wears a big, bright rhinestone diamond in the center of her forehead.

At the 2017 Miss Subways Pageant, she wore a black-plastic trash bag confection, complete with a blinking plastic-rat necklace and red garbage bag bustle. She belted it with yellow CAUTION tape. 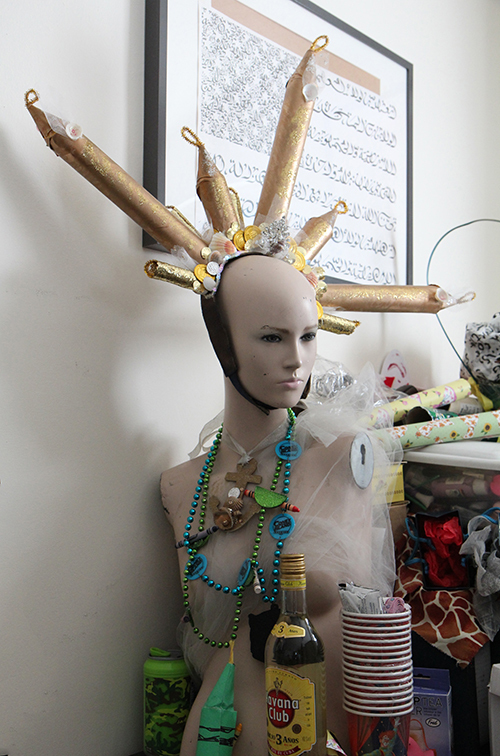 “I represented the N and the W lines,” she says. “So I actually made two costumes. The second one, which I changed into during the middle of the contest, was a beautiful mermaid. I bribed the judges – it was all in fun, of course – with yellow N and W sugar cookies and mini plastic rat necklaces.”

Rats! Someone else took the title, but Suzie was named Miss Congeniality.

And her eclipse outfit was comprised of a pink cowboy hat embellished with a sun-protective veil fashioned from a belly dancer’s big-sequined scarf.

Suzie, who is from Saginaw, Michigan, can’t remember a time when she wasn’t wearing a costume. Her grandmother, Georgie, sewed, and her mother made outfits for Suzie and her three siblings. 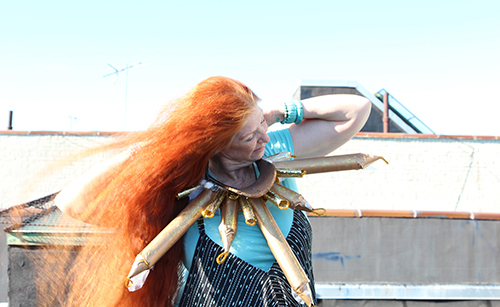 Photo by Nancy A. Ruhling
Hair flying like a comet, Suzie prepares to put on her crown.

“I still use my grandmother’s 1950 portable Singer sewing machine and her homemade pin cushion,” Suzie says.

Suzie costumed herself while she was earning her bachelor’s and master’s degrees and also created outfits for her own two children.

She wore her costumes in the classrooms of Boston University and Emerson College, where she taught voice and articulation and oral interpretation of literature. 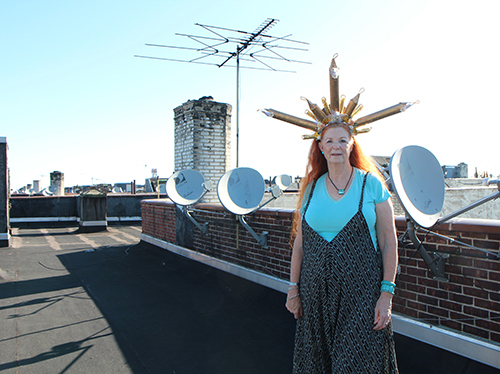 Photo by Nancy A. Ruhling
Suzie dazzles in her mermaid crown made of paper towel rolls.

In 2004, she and her closet of costumes came to Astoria.

She gets an idea, assembles the elements on her kitchen countertop and starts putting things together until they look right.

Her close friend, Marie Clarise, is her sounding board and model. 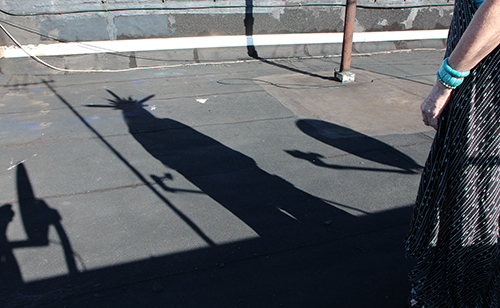 Photo by Nancy A. Ruhling
Her other self.

“She’s a half-mannequin I found on 23rd Street in Manhattan,” Suzie says. “I put her in a plastic bag, but her head was sticking out, so I put a beret on her and carried her around to my appointments that day. I’ve been consulting her ever since.”

Suzie, a consummate recycler, likes to mix and match pieces. One of her more successful re-dos is Penny, the Mermaid of the Well, who turns into a living Easter basket.

“Creating the costumes is just as fun as wearing them,” she says. “I spent 55 hours making Penny.” 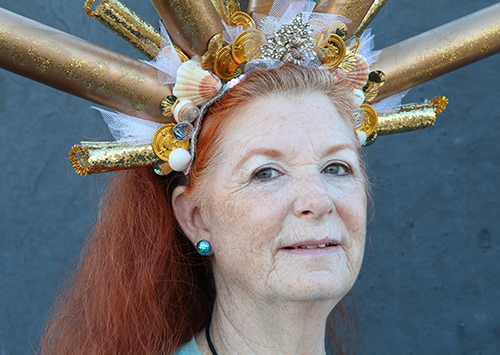 Penny’s top, a wishing well complete with a bucket, is in storage, but Suzie shimmies into the bottom and holds up the handles to show what it looks like as a bunny basket.

“If something is coming up, I costume for it,” she says. “For instance, if tomorrow I’m going apple picking, I might wear a dress that’s made from a feed sack and put my hair in braids.”

In addition to all the trims and tutus, Suzie collects vintage smokers that hold cigarettes, camel statues and squashed pennies. 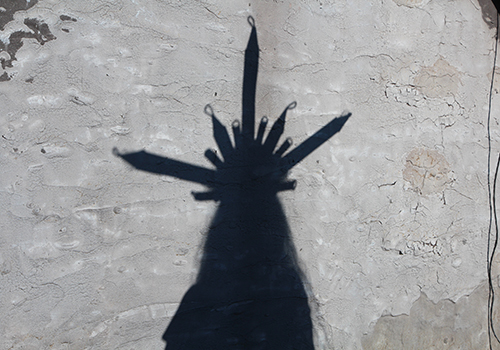 Photo by Nancy A. Ruhling
Suzie casts a tall shadow.

“They are all small, hard to find and easy to carry, so I don’t spend a lot of money on them,” she says.

Look for Suzie today. She’ll be standing outside Blossom in Astoria on 31st Street at Ditmars Boulevard handing out Halloween candy from 3 to 6 p.m. as The Lady of the (Subway) Lines.

She’d love to pose for photos. Don’t worry if you don’t have a trick-or-treat costume.