James Everett puts his hand over his chest and pretends to listen intently for the beat. 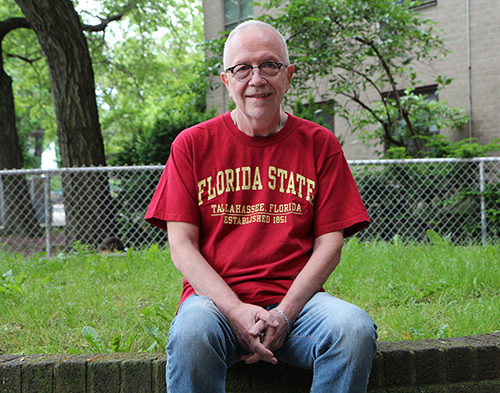 Photo by Nancy A. Ruhling
James was born in Astoria Houses and lives across the street from them.

The seconds tick by.

The declaration is delivered playfully.

James, who was born with a heart condition, has had three open-heart surgeries and recently beat a bout of endocarditis.

He gave up worrying about it long ago.

So, he says, should you. 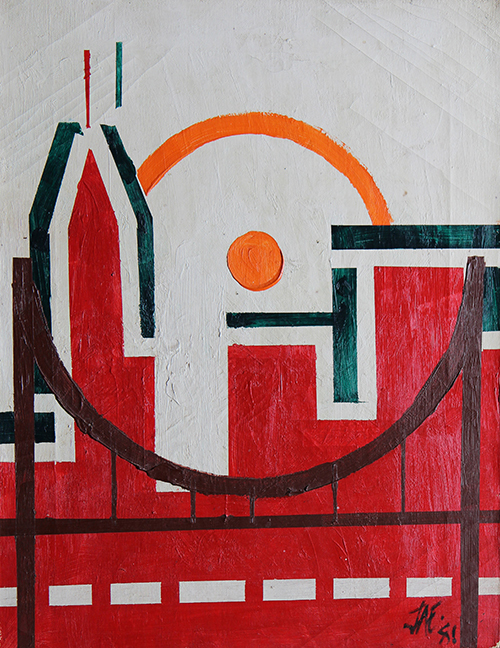 Photo by Nancy A. Ruhling
One of James’ paintings.

James, who has remnants of wispy white hair and the polished voice of a broadcaster, also has survived testicular cancer.

What surprised him was the recent onset of epilepsy. All he remembers is that he woke up in a hospital bed.

“Isn’t that a kick,” he says, adding that medication is keeping his symptoms under control. “I have a car, and I can’t drive it for six months.”

He laughs. What else is there to do about it?

“I deal with my health issues and move on,” he says.

James, who is 65, may have moved on, but he’s never moved out of the neighborhood.

He grew up in Astoria Houses when they were new, and lives in Bridgeview III, which is right across the street. He’s occupied the same one-bedroom unit for 40 years. 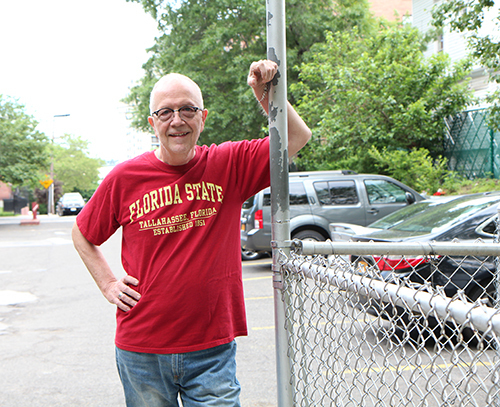 Photo by Nancy A. Ruhling
He has a degree in education from Queens College.

“I call myself ‘project white,’” he says. “This goes to the core of who I am. From living in the Houses, I learned that we’re not all the same, but nobody is better or worse. And I take all my experiences from there and incorporate them into my life.”

James had another issue to grapple with when he was growing up.

“I knew I was gay, but it had a totally different meaning at that time,” he says. “I had to figure out gay and then why the world hated gays.”

“The traffic jams were horrible,” he says. “At a certain point, you had to get out of the car and walk. I only stayed a few hours.”

He still has a Woodstock poster hanging on his living room wall.

And he checked out Greenwich Village with a high school friend. 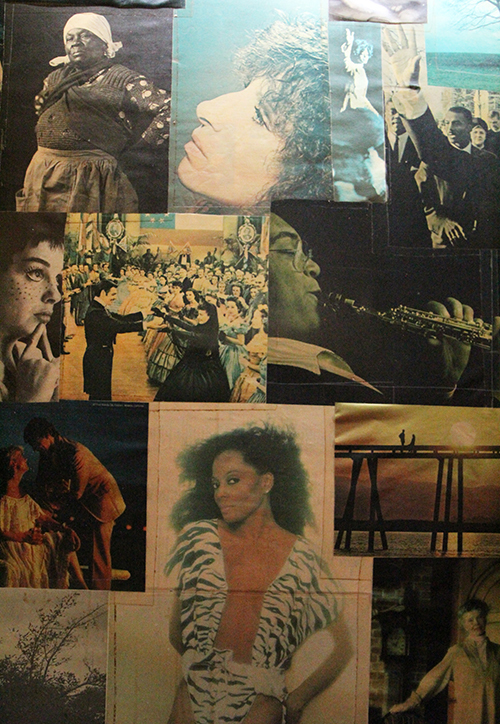 Photo by Nancy A. Ruhling
James made this collage in his kitchen when he moved into his apartment 40 years ago.

“We walked straight into the Stonewall Riots,” he says. “I ran like hell because I was only 17 and wasn’t supposed to be in a bar.”

James, who is one of four children, dreamed of being a singer (“I love to sing, but I don’t know if anyone would want to hear me”) or an artist (his kitchen wall features one of his collages, and his bedroom is filled with his framed drawings).

He ended up being a teacher at the Astoria Houses community center and then a word processing operator for a corporate law firm in Manhattan.

Eighteen years ago, he met the man of his dreams.

“We’re not married,” James says. “And we don’t live together. He’s in Elmhurst.”

James hadn’t planned to retire early. His health issues made the decision for him, and has taken his new status in stride.

A couple of days a week, he speed walks five miles on the track at Astoria Park. 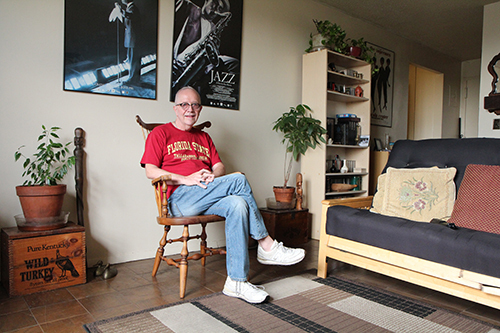 Photo by Nancy A. Ruhling
James spent most of his career working for a Manhattan law firm.

Speaking of the past reminds James of the daring bicycle trip he and his buddy Charlie took when he was 10.

One of their friends had moved to Brentwood, Long Island, and they got it into their heads that they would visit him that August of 1962. They had no idea that it was 41 miles each way.

“They were widening the Grand Central for the 1964 World’s Fair, so we rode on one of the lanes that was being built,” he says. “We got as far as the Nassau/Queens border before the cops stopped us and threw us off. I realized I was near my grandmother’s house, so we stopped there for lunch before pedaling back. She called my parents and told them what I had done.”

As punishment, James was grounded until the start of school in September. 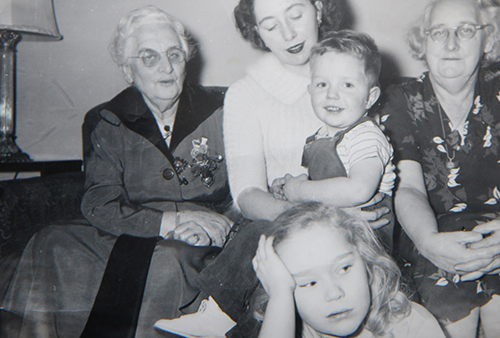 Photo by Nancy A. Ruhling
James as a toddler.

Alone with his thoughts, he wrote to President John F. Kennedy, who had established the Youth Fitness Program, to ask him to get him off the hook.

JFK didn’t lessen James’ sentence, but he did send him a small card with his signature and some advice via his personal secretary, Evelyn Lincoln.

“She wrote me a letter saying that I should ask my parents before doing anything like that again,” James says.

The framed card, along with a photo of the uncooperative president, hangs in his bedroom.

James is still getting used to all his free time and says he hasn’t done anything exciting. 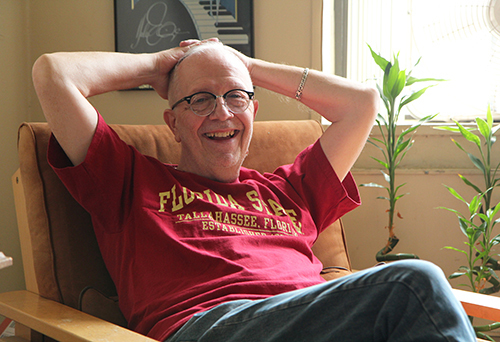 Photo by Nancy A. Ruhling
He’s enjoying being lazy during retirement.

He skips over the part about being rushed to the hospital when he had the epileptic seizure.

“I not a bible-thumping churchgoer,” he says. “But god and I have had some interesting conversations, and I do feel blessed.”

Dying? He’s not concerned. We all have to do it sometime.

At the moment, he feels he’s in excellent health because his ailments are under control.

He gets a mischievous look in his eye.

“In fact,” he says, “I hope you say in your article that you thought I was 35 instead of 65 and was shocked to discover the truth.”