Dominique Perrot has painted striking stripes in her long, dark hair. She’s decided to go grey gracefully, and the indigo streaks blend in and stand out at the same time, making her ageless. 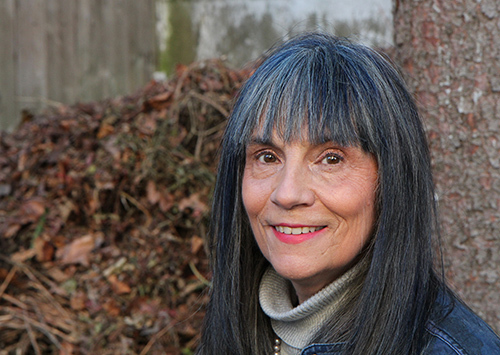 Photo by Nancy A. Ruhling
Dominique is a native of Astoria.

She’s never worn her hair short and cannot imagine what it would be like to have her ears and neck uncovered.

She doesn’t know what color her hair will choose to be in this, a new chapter in her life that brings her back to her beginnings, but strand by strand, she’s willing to let the past, present and future merge.

Speaking of the past, Dominique has pulled out a binder filled with vintage postcards that illustrate the history of Astoria. 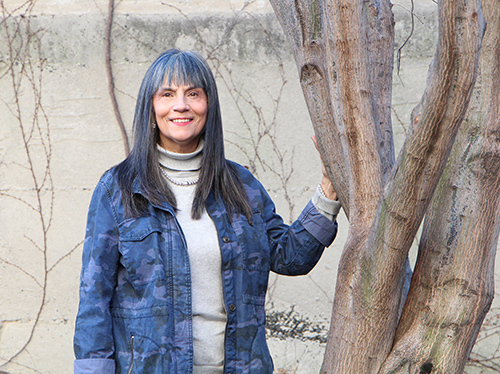 Photo by Nancy A. Ruhling
For 39 years, she was a teacher in Canada.

She’s sitting in the 1901 Victorian house her parents bought when she was 4 months old. In the days before nearly everything in the neighborhood became numbers, her street was called Clark.

“We only spoke French at home,” she says. “I learned English on the street.”

They settled in Astoria for no reason other than that it was close to the United Nations.

“My father worked there, and he literally took out a compass and drew a circle on the map,” Dominique says. 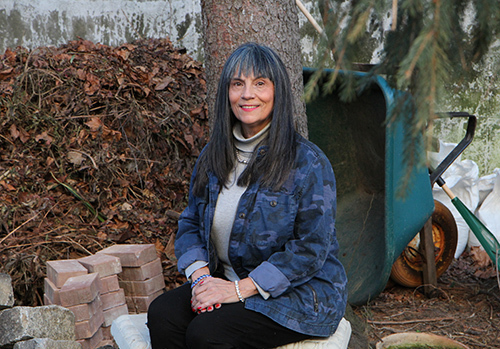 Photo by Nancy A. Ruhling
She moved back to Astoria in 2014 to care for her mother.

The Perrots, who paid about $7,000 for their three-family home, were the third owners, taking up residence in 1951.

“We lived on the bottom floor, where my mother lived until she died last year,” Dominique says. “We didn’t have a phone in the beginning. We still have the same phone number. I don’t want to change it.”

The area where 14th Street, Astoria Boulevard and 28th Avenue cannot help but run in to each other goes largely unnoticed these days, but back in Dominique’s time it was a vibrant village of mom-and-pop shops.

Dominique remembers making trips to the supermarket, the vegetable store, the florist, the drug store, the fish market and the paint store. She recalls going into the 5 and 10 and the soda fountain.

She bought her god-awful-ugly Our Lady of Mount Carmel regulation oxfords at Tina’s Shoe Store.

She still has one of her navy-blue school jumpers packed away somewhere in the house. 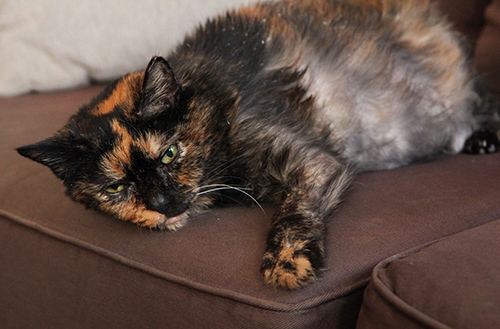 Photo by Nancy A. Ruhling
Minette showed up on the doorstep.

She recalls gazing at the tuxedos in the window of the men’s clothing store where Astor Bake Shop stands. She can’t remember its name, but she sees it clearly in her mind.

And the library, that was her ticket to her future.

“I read every book that was there,” she says. “I still teach knitting and crochet there.”

Dominique’s parents divorced when she was 10, but they kept the house, which is why everything brings back memories.

“My mother, younger sister and I remained downstairs,” she says. “For many years, my father lived upstairs in the apartment we’re sitting in.” 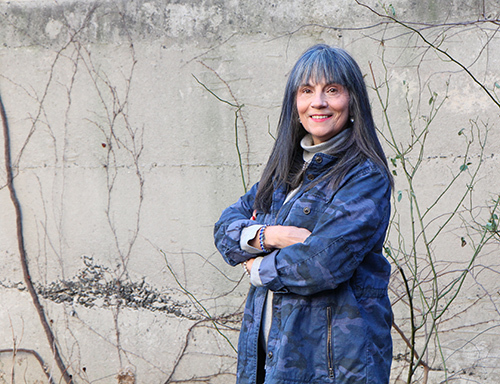 Photo by Nancy A. Ruhling
She’s begun studying the history of Astoria.

It was he who made the floor-to-ceiling closets in the bedroom.

See that mirror? He hung it there.

And he created the large painting over the sofa. It’s of fig leaves like the ones on the tree in the back yard.

The items in the house may have stayed in place, but the family did not. In addition to annual visits to France, Dominique saw much of South America and Europe.

“My mother worked for Air France,” she says. “We got a lot of free trips.”

Always adventurous, Dominique studied at the University of Ottawa, where she majored in archaeology and classical history and met the fellow student who became her husband. 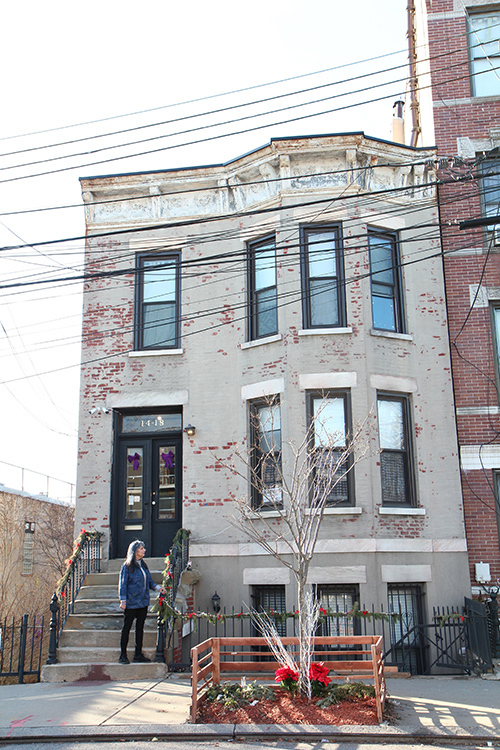 Photo by Nancy A. Ruhling
Dominique’s family bought the house in 1951.

They settled in Canada, living in Ottawa and Toronto, and Dominique became a public-school teacher and the mother of two.

“I taught French and every grade from kindergarten on up,” she says, adding that she retired after 39 years in the classroom. “I also trained teachers. When I was teaching third grade, Justin Trudeau and Matthew Perry were in my class. They were a couple of years apart.”

Every summer and every holiday, she and her children came back to Astoria.

When Dominique’s mother became ill in 2014, Dominique moved back permanently and started studying the history of the neighborhood in depth. 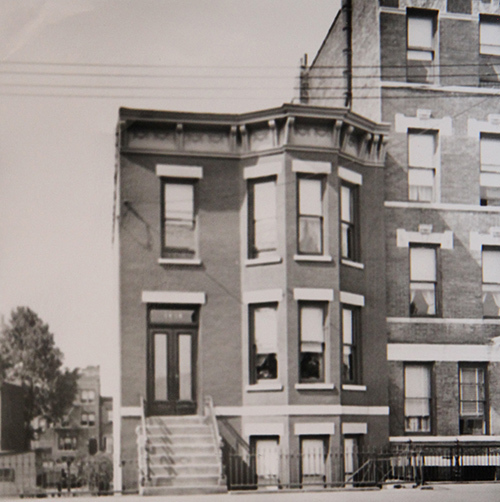 Photo by Nancy A. Ruhling
A vintage photo of the 1901 house.

“I wanted to rediscover Astoria,” she says. “It’s like a small village. Every time I walk down the street, it takes me 20 minutes longer because everyone stops to talk to me.”

She flips through the postcards.

“I even discovered a Perrot Street on the map,” she says. “I don’t know how or whether it relates to my family.”

Dominique’s mother died in the summer of 2016 at 92, but she has decided to stay, at least for a while.

Minette, her mother’s 6-year-old Calico cat, jumps on the sofa. She’s not supposed to be there, but Dominique is indulgent. 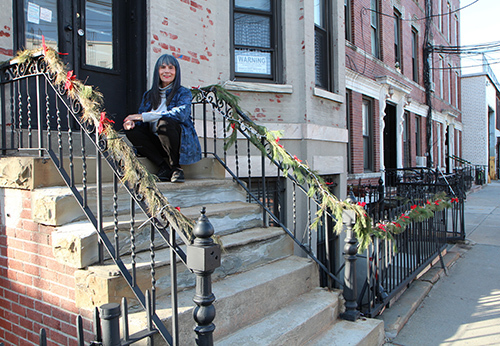 “She’s got diabetes and has to have insulin,” she says. “When my mother died, she hid under the bed for six weeks. She’s a feral cat – she just showed up on our doorstep.”

Dominique mentions that she would like to travel again. Perhaps she will camp her way across the country. And she has to go back to Paris.

“Right now, my life is here,” she says. “I want to share the history of Astoria with other people, so I’m putting together a walking tour.”

She closes her scrapbook of postcards but puts it on the coffee table where it is within easy reach.

“I want to cherish the past and embrace the future,” she says. “The past is why the future is here.”