When she was a little girl, Elizabeth Chubbuck used to climb to the top of the wooden jungle gym at the elementary school by her house. 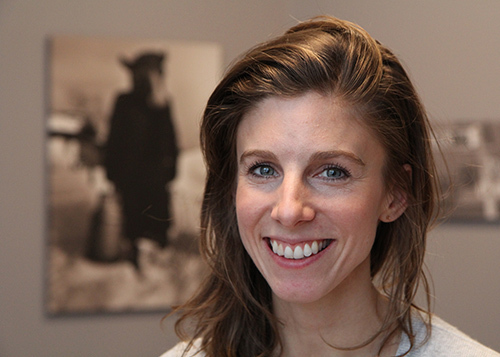 Photo by Nancy A. Ruhling
Elizabeth’s the vice president of sales and marketing for Murray’s Cheese.

Each time, she opened her big blue eyes wide in hopeful expectation.

Illinois is a flat-out flat state so she could see for miles and miles. 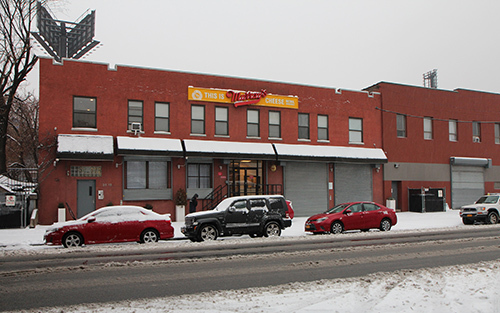 Photo by Nancy A. Ruhling
Murray’s Cheese moved its caves to Long Island City in 2013.

But the view offered her nothing more than the unrelenting cornfields of her hometown of Urbana.

“I kept telling myself that there was something else out there,” says Elizabeth, the vice president of sales and marketing for Murray’s Cheese. 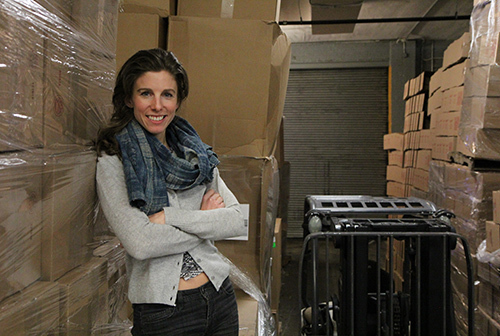 Photo by Nancy A. Ruhling
Elizabeth started her career in magazines.

She had had glimpses of this elusive “something else” before.

Hers was an adventurous family. Her people came to America in 1642, and both sides of her family fought against England in the Revolutionary War. 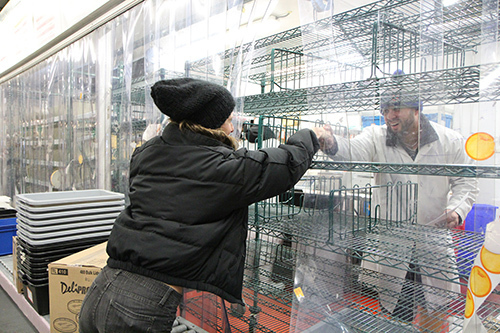 Photo by Nancy A. Ruhling
She’s always excited to visit the caves.

Urbana is a conservative city, but Elizabeth’s father established a small liberal-minded church, and the University of Illinois took another big bite out of the Midwest mindset.

“The school was multicultural, and we rented rooms to grad students,” she says. “One of them was Dutch. He traveled a lot and brought me souvenirs from around the world.” 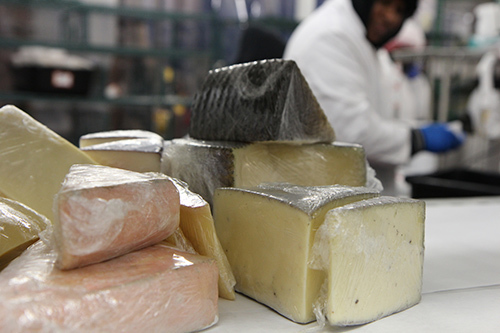 Photo by Nancy A. Ruhling
Cheese ready for sale.

When it came time for college, Elizabeth chose Trinity in Hartford, Connecticut. It had nothing to do with wanting to leave her home state.

“I ended up there because I got a scholarship,” she says, adding that she had wanted to study journalism at Illinois’ Northwestern University. 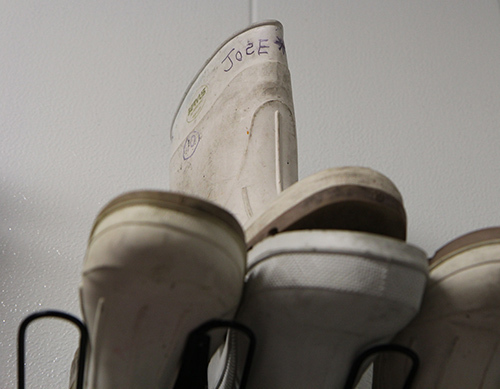 Photo by Nancy A. Ruhling
These boots are made for walking … in the cheese caves.

“I spent four years lying on a couch reading and dreaming,” she says, smiling. “When I graduated, I wanted to teach English in Prague. My parents asked me who was going to pay for the plane ticket. I told them I thought they would. They told me to get a job.” 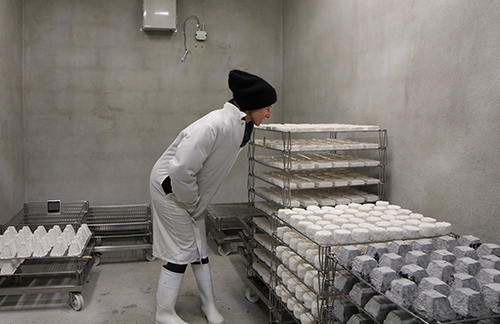 She moved to Manhattan, where she had friends, working for a brief time for an import-export company before landing an ad sales job at Cosmopolitan magazine then Good Housekeeping.

Part of her job was entertaining clients, so she began taking them to Murray’s for wine and cheese classes. 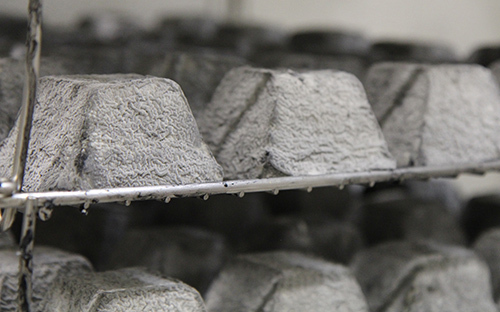 Photo by Nancy A. Ruhling
Murray’s usually has 20 kinds of cheese in the caves.

“I fell in love with cheese,” she says.

In fact, she became so well known to the staff at Murray’s that she was offered jobs twice.

“The experience totally reshaped my life and my ideas about food,” she says. “I had been selling ads to industrial food companies.” 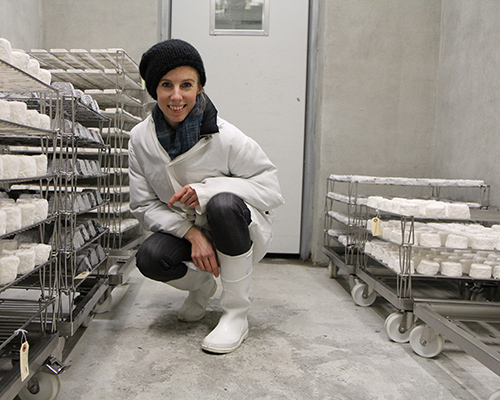 Photo by Nancy A. Ruhling
Exploring the cheese caves is always an adventure for Elizabeth.

“The pay was 40 percent less than what I was making,” she says. “I called my mom, and she said that it was the worst decision I could ever make. But when it came time to sign the papers, I did.” 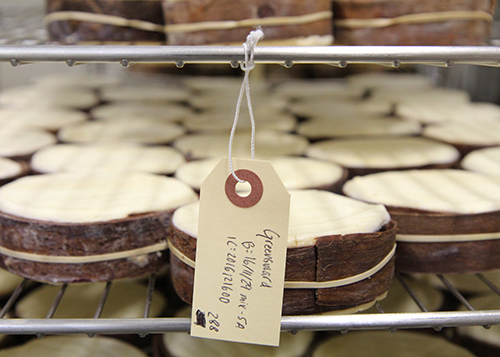 Photo by Nancy A. Ruhling
Greensward waiting for its prime time.

She started out as the wholesale manager, and in 2015 became the vice president of sales and marketing, which also includes directing the catering and events/education departments.

Elizabeth, a certified yoga instructor who starts each morning with a 20-minute meditation, likes nothing more than giving a tour of the cheese caves, the lab-like vaults where some 20 kinds of cheese are sent to age for 10 days to 14 months like fine wine. 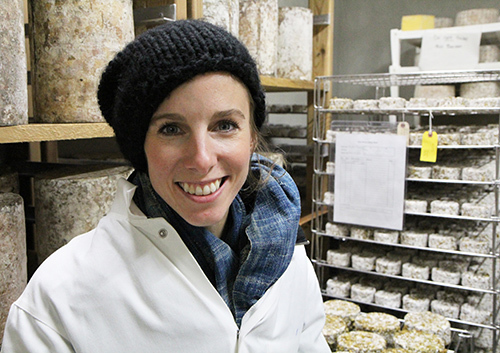 Photo by Nancy A. Ruhling
Elizabeth loves her job because she learns something new every day.

Murray’s, the only cheese caves in Queens, sells close to 1 million pounds of cheese each year in New York City alone.

Established in 1940 as a wholesale eggs and butter purveyor on Bleecker Street, where its flagship retail shop is, its cheeses are also sold at a shop in Grand Central and at more than 350 grocery stores around the country.

The caves were moved from Bleecker Street to Long Island City’s 16,500-square-foot Borden Avenue site in 2013. 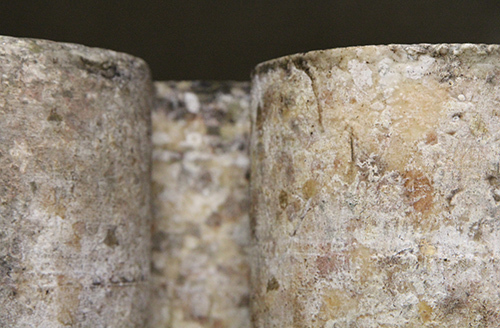 Photo by Nancy A. Ruhling
Clothbound cheddar is the only cheese Murray’s makes.

“Murray’s only makes one cheese – clothbound cheddar,” Elizabeth says. “It’s made at the Cornell Dairy Plant at the university in Ithaca and sent here to age. The other cheese are made for us and sent to the caves.”

When Elizabeth was working with restaurant chefs, it was common for her to taste dozens of different cheese each five-day workweek.

To unwind her tricked and tired taste buds, she turned to French Comte, which she calls her “Saturday cheese.” 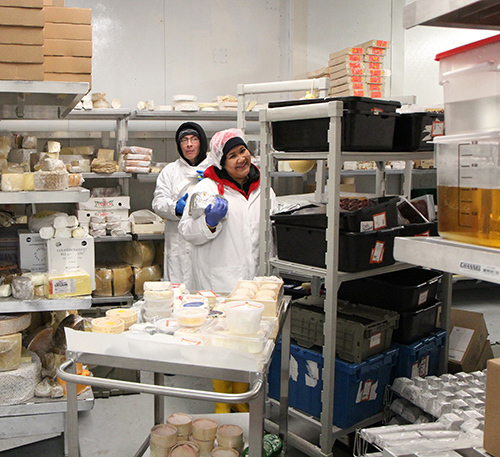 Photo by Nancy A. Ruhling
Some 60 to 70 people work in the cheese caves.

“It’s simple and balanced yet sweet,” she says. “It’s mild. I grate it on eggs, eat it with chunks of apple or by itself.”

Walking through the caves is always a treat for Elizabeth, who typically works 45 to 55 hours a week. She gets so excited that she starts snapping photos on her cellphone.

“I can’t imagine a better job for myself,” she says. “I learn something new every day. I see my job as opening doors for people, guiding them through and creating space to find themselves.” 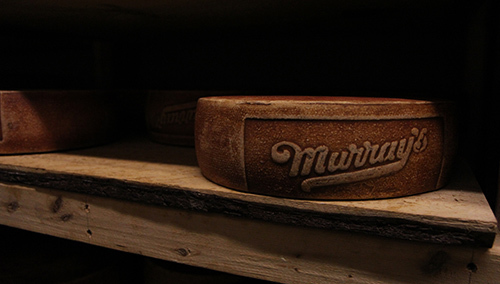 Photo by Nancy A. Ruhling
The mouth-watering label.

When asked whether she wants, someday, to own her own business, Elizabeth offers a practical middle-of-the-road answer that could have been homegrown in Urbana.

“What I’m doing now is the best of both worlds because I have a lot of liberty to exercise my ideas,” she says. “It’s like operating my own business without the stress of owning it.”