Tom Wagner, cap and coat in hand, is itching to get outside.

He was homeless for two decades, and although he loves his apartment, anything with four walls feels confining. 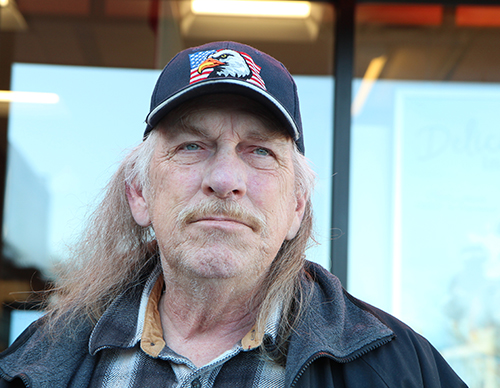 Cadillac Man wrote Land of the Lost Souls: My Life on the Streets.

Besides, he needs a cigarette. It’s hard to kick a habit you started when you were 10. But he’s down from two packs to two to five cigarettes a day.

Out in the street, he leans on his quad cane and lights up. Now he really feels alive.

As he does every morning, he heads to Sal, Kris & Charlie’s Deli for a buttered roll and a cup of coffee (a little milk and three sugars).

He likes to hang out at Sal’s because it’s across the street from the 23rd Avenue viaduct at 33rd Street, which is where he and the shopping cart he “liberated” from Costco in Long Island City made their home.

In those days, everyone knew him as Cadillac Man, the name he’s still most apt to answer to.

He won the motorized moniker after he and his cart had six close encounters with errant Cadillacs in the mid-1990s. In the last crash, he landed on top of a piece of the logo.

“It left an impression on my stomach that I showed to everyone,” he says. “After that, people started calling me Cadillac Man. The name stuck.” 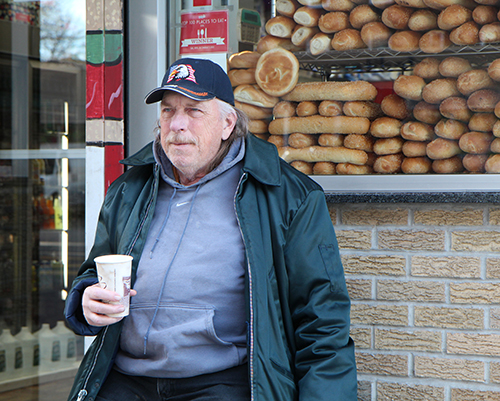 He has breakfast every day at Sal, Kris & Charlie’s Deli.

So did Cadillac Man’s story.

While he was sleeping in the street and collecting cans and bottles for coffee and cigarette money, he was writing about his experiences.

In 2005, Esquire magazine published a piece he wrote about being homeless.

That led to the 2006 documentary, Cadillac Man: Life Under the Viaduct. His 2009 memoir, Land of the Lost Souls: My Life on the Streets, was based on his handwritten diary, which filled 16 spiral notebooks.

By that time, Cadillac Man was living in a basement room in East Elmhurst with Carol Vogel, his girlfriend.

She offers him a cup of coffee when he returns from his street rounds.

They struck up a conversational friendship, and during the deep downpours of that autumn, she invited him to sleep on the floor of her apartment. 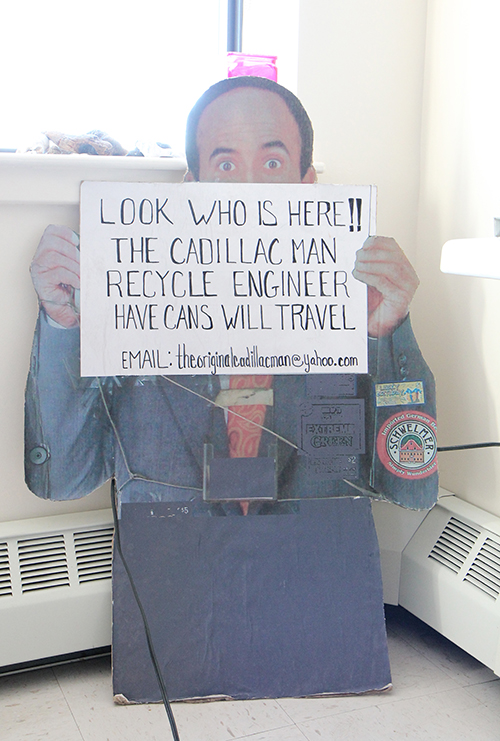 “I fell in love with her,” Cadillac Man says. “But I didn’t want to tell her.”

“I didn’t help him, he helped me,” Carol says. “He’s calm and level-headed and has common sense. He’s a grounding force in my life. My life straightened out and stabilized after I met him.”

Cadillac Man, giving her a hug and a kiss, insists it’s the other way around.

Carol, he says, saw him as a man, not as a homeless man, even before she knew his story.

They tell it together, Carol adding so many details that it’s almost as if it’s her life she’s talking about.

Cadillac Man, who was born and raised in Hell’s Kitchen, was one of seven children. He had a pretty ordinary life. Until, all of a sudden, he didn’t. 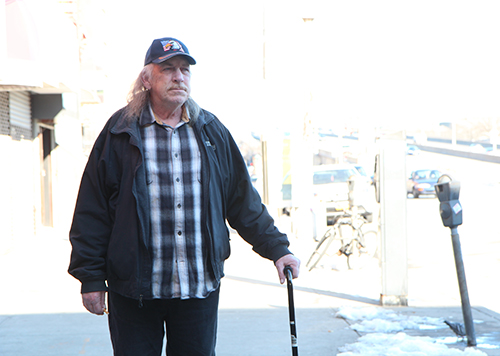 At 16, he quit high school to take a full-time job at a candy store. It was the $40-a-week salary that seduced him. (Later, he got an equivalency diploma.)

Cadillac Man joined the U.S. Army for a 3-year stint when he was 19. It was during the Vietnam War, and he was stationed in Belgium as a bodyguard for a general.

When he came home, he bought a canary yellow Chevy Impala and drove all over the country.

“In 15 months, I passed through every state except Alaska and Hawaii,” he says. “Around this time, I found out that I had become a father at 15. The girl, whose last name I never knew, sent me a letter with a photo of my daughter. There was no return address; I’m still trying to find her.”

In 1974, he married a girl in the neighborhood and had another daughter. After their divorce, he remarried and had a third girl.

Carol brings out a binder of newspaper clippings and photos. She points out a picture of Cadillac Man, wearing a baby-blue tuxedo, with wife No. 2 on their wedding day.

She remarks that he looks like the actor Donald Sutherland. 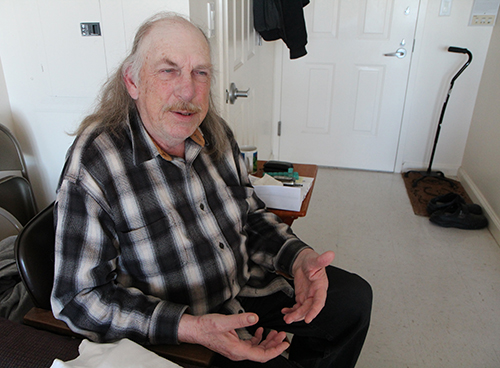 By this time, Cadillac Man had had a series of jobs – at a meat market, a cigar store and a liquor store – that led to an office position at the Pepsi-Cola bottling plant in Long Island City.

For a while, he returned to the meat market, but when it closed, he never found full-time work again. His wife took on two then three jobs, and Cadillac Man became a house husband.

He earned certificates in asbestos abatement and fire safety, but the jobs he applied for required more experience than he had, which was none.

When he wife was divorcing him, in 1994, he found himself out on the street.

“My first night, I slept across from the Waldorf Astoria at a bank,” he says. “I got free food at St. Bart’s Church.”

For a short time, he lived with his brother. Then his sister took him in temporarily. 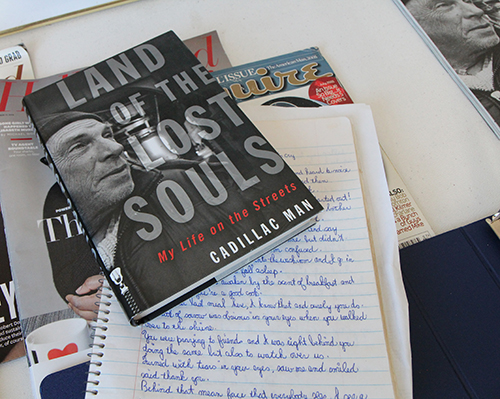 His 2009 book, Land of the Lost Souls: My Life on the Streets, made him a celebrity.

Collecting cans and bottles gave him something to do; each day he earned $20 to $100.

“I saw being homeless as temporary,” he says. “When people yelled, ‘Get a job,’ I shouted back, ‘Give me one.’ I’m proud to say that I never asked anyone for a dime. But sometimes, if people offered me money and I needed it, I took it.”

He rolled his cart through all the boroughs except Staten Island.

“Several times each week, somebody picked on me,” he says. “I was shot at, stabbed and lost my teeth.”

In 2002, Cadillac Man, barrel-chested, red-haired and an avid reader of Clive Cussler thrillers, parked himself at the Astoria viaduct.

When Carol, who is a quarter century younger, encountered him, Cadillac Man was ready for a change.

The book and the documentary caught the attention of Richard Gere, who consulted Cadillac Man for the 2014 film Time Out of Mind. 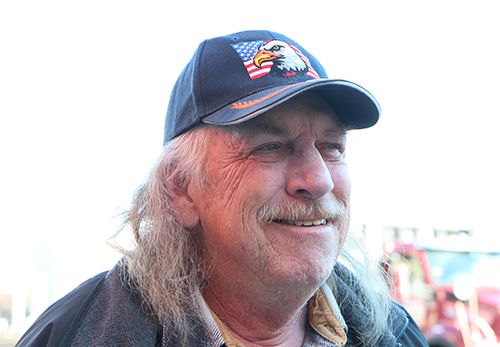 Cadillac Man wants the world to see the homeless as people.

In 2015, he got his apartment at HANAC’s George T. Douris Tower on Hoyt Avenue South through a program that benefits homeless veterans.

He still marvels at his good fortune, even though it didn’t bring him much money.

“The royalties from my book go to my second wife,” he says and shrugs, adding that didn’t write it to get rich but to make people aware of the homeless.

The $275 in subsidized rent he pays for his spartanly decorated one-bedroom apartment leaves him some money in his pocket.

Carol, who lives in Rockaway Park, chips in for food and other necessities. When she visits, she cooks and cleans and takes him to doctor appointments.

Cadillac Man, who is 68, is writing some more stories. He’s working on one about Christmas; he left his live table-top tree up for inspiration.

He hopes his story helps people put faces on the homeless. 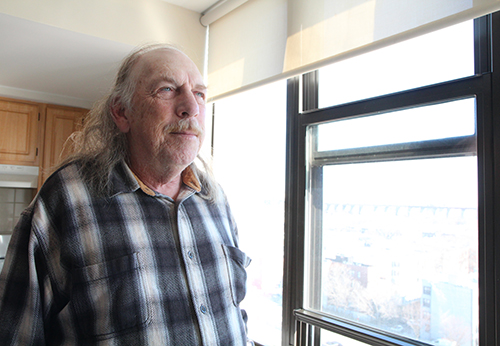 “Homeless people are not born homeless,” he says. “They’re real people – they are somebody’s husband or wife or son or daughter. If I can get even one person in a crowd to understand this, I will consider myself a success.”

He looks out of the windows of his 12th-floor apartment. He keeps them open even in the winter so he can hear the sounds of street life.

When he moved in, he felt right at home because he could see the 23rd Avenue viaduct.

Now, however, new, tall buildings block most of that view.