When you have three children under the age of 4, it’s not always easy to get out the door on time. 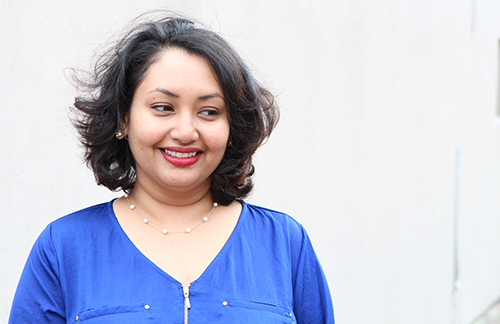 Yamina teaches English as a second language to second graders at P.S. 70.

But Yamina Islam-Haque’s got this.

She’s an English as a second language teacher at P.S. 70, and being in charge of a classroom of second graders has made her an astute student of childhood behavior.

Ruby and Sufi, her 3-and-a-half-year-old twin daughters (Sufi, for some reason, keeps proclaiming that she’s only 2 and a half), and her 2-year-old son, Sami (who can’t tell Ruby and Sufi apart so calls them Api, which means sister in Urdu), are chattering – and  running – away at high volume and velocity. 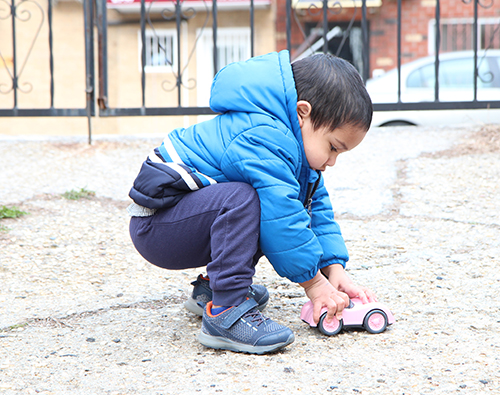 Yamina, whose big brown eyes have been tracking them like GPS as she talks, corrals them, and with the help of her husband, Faheem Haque, bundles them into their coats for a walk, which becomes more like an errant race.

It’s Saturday, so the siblings are super excited because mommy and daddy don’t go to work and can devote the entire day to them. 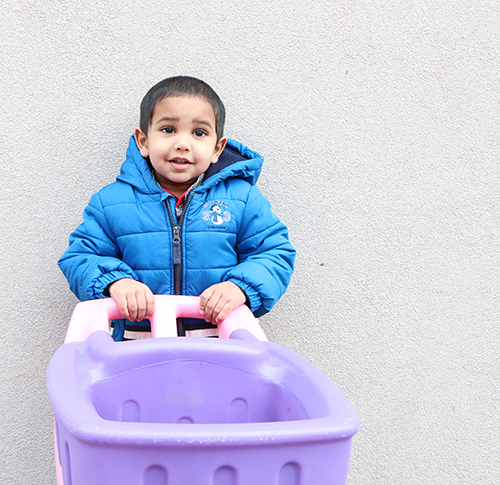 Sami likes to play with cars and carts.

During the week, Sami stays with Faheem, who works from their East Elmhurst home, and a babysitter, and the girls are cared for by Yamina’s parents, who live a short drive from P.S. 70.

This, Yamina hopes, is the last school year things will be so hectic: In September, Ruby and Sufi will go to pre-kindergarten classes full time. 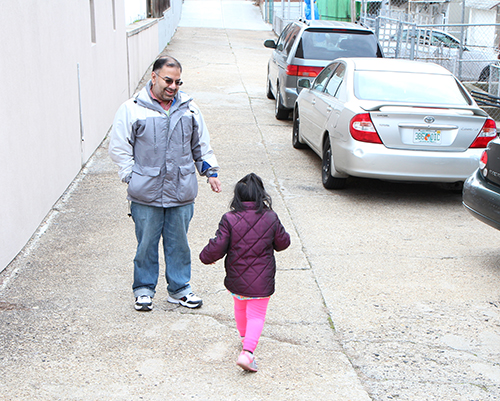 Yamina, the youngest of three children, was born in Dhaka, the capital of Bangladesh, and was brought to this country by her parents when she was around Sami’s age.

“They came for a better life,” she says, adding that they chose the East Coast because her father had a brother in Delaware and one in Astoria. 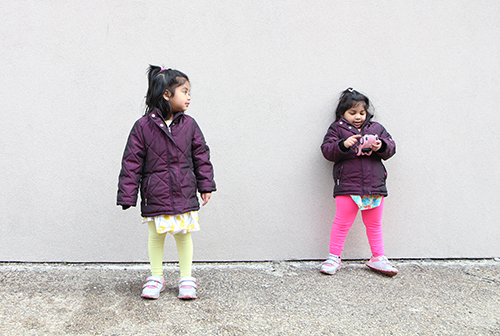 Twins Ruby, left, and Sufi are 3 and a half.

The family moved around New York City and even spent some time in Arlington, Texas, before settling in Astoria when Yamina was 7.

“We were the only Bengalis in Astoria,” she says, adding that most of the people she met were Greek. “And when we were in Texas, we were the only brown people there.” 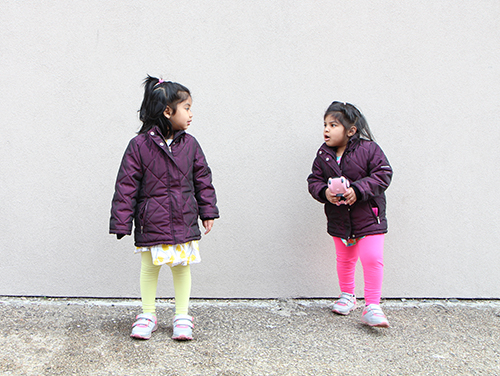 Can’t tell the twins apart? Neither can Sami. Sufi’s in the pink tights.

Although she was a child, Yamina found it difficult to fit in.

“My whole life I wanted to be someone else,” she says. “I didn’t want to be Bengali and Muslim.” 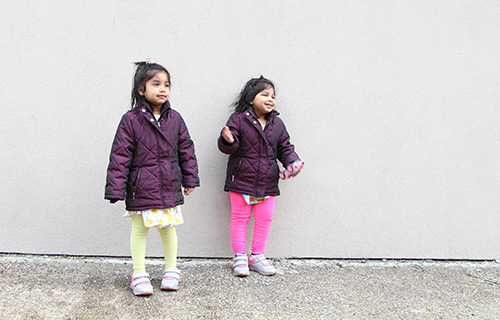 Yamina attended P.S. 17, P.S. 122 and Bronx High School of Science. At Stony Brook University, she earned a degree in linguistics.

“The only reason my parents let me go so far from home was that my brother was already going there,” she says. 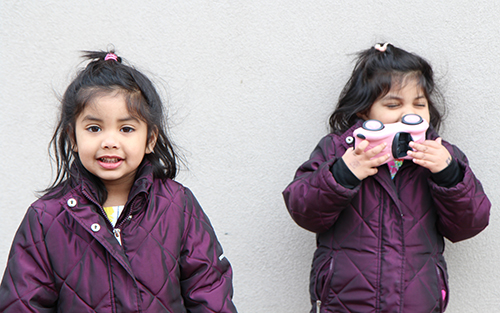 Ruby, left, and Sufi goofing around.

When she graduated, she became a case worker for United Cerebral Palsy of Long Island, where she worked until she met Faheem on Match.com.

“My parents didn’t like us dating because Faheem is not Bengali,” she says, adding that they lived two blocks from each other when she was growing up yet never met. “He’s Pakistani and was born here. The fact that we are both Muslim didn’t make him any more acceptable to them.”

The couple also had something else in common: They were obese and dropped their mega-weights by doing yoga and Pilates. 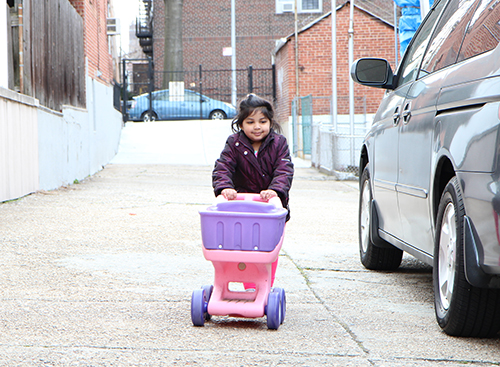 In 2009, Yamina married Faheem and quit her job – “I felt stuck because there was no way to advance” – and enrolled at LIU Post full time to earn a master’s degree in teaching English as a second language.

“I’d always wanted to teach because I had such great teachers when I was at P.S. 17,” she says, adding that it was while she was a student there that she became a U.S. citizen in third grade. “I chose English as a second language because my sister, who was six when we came to America, was put in a special-education class because she was ESL. But my mother is persistent, and the next year, she got her placed in a magnet school. I wanted to help newcomers like her.” 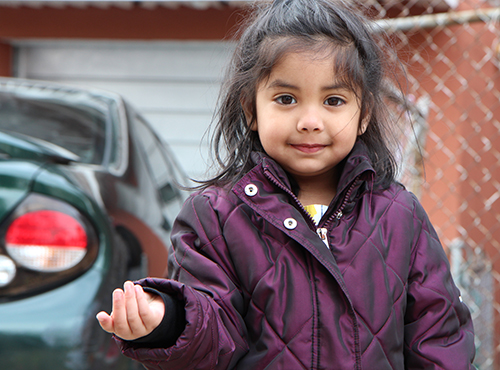 Ruby: See what I have in my hand!

So she was ecstatic when she got a job at P.S. 17 as a full-time substitute teacher.

“But the school was not the same,” she says. “There was a different principal, and the teachers I had were no longer there. And there were no permanent positions open.” 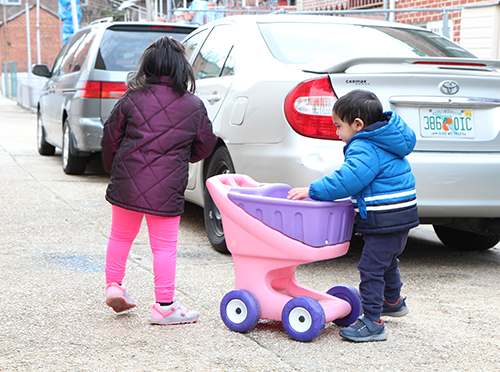 “I’m teaching so I can help kids like myself feel less scared about being new to a country and a language because maybe they see someone like myself who looks like them and was in their shoes,” she says. “It’s comforting to them.”

Getting a job with children was far easier than having her own.

Ruby and Sufi were conceived via in-vitro fertilization, and Sami, in defiance of doctors’ conclusions, came naturally and unexpectedly. 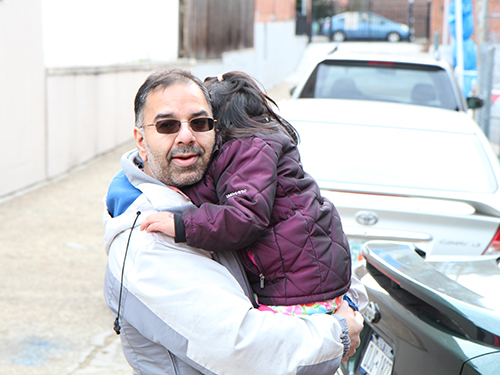 “We were told we would have to do IVF to have any more children and were going to wait a while to do that,” Yamina says. “But I got pregnant with Sami when the twins were not yet a year old.”

When the children have played themselves out, Yamina and Faheem gather them up like chicks and bring them back inside.

There’s some high-pitched back and forth before things settle down. 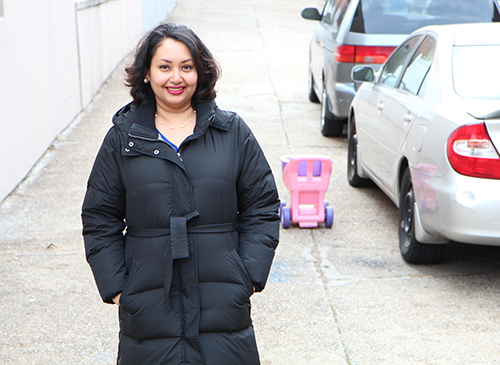 Yamina — mother, wife, teacher – is right where she wants to be.

“I’ve found a family at P.S. 70,” she says. “Being in a classroom is the one place I don’t feel shy, and it makes me feel like a rock star when former students visit me. I want to be doing this the rest of my life.”

She smiles when Ruby, Sufi and Sami come running toward her.

Astoria Characters Day: The 2nd Family Reunion is Sept. 23, 2018. It is sponsored by Bareburger and Salt & Bone.