The Milano cookies are on the table, the metal cane is curled around the closet door knob and the walker is sulking in the corner.

Henrietta Spilkia, whose friends recently toasted her 95th birthday with champagne and wraps, comes into the living room on her own power.

She’s as short as her time left on this planet; she doesn’t even stand five feet any more. “I used to be taller, but then everyone shrinks with age,” she says.

Don’t let her age fool you. She looks 75, and she’s as vibrant as her hot-pink turtleneck and cherry-red lipstick. Pen and loose-leaf notebook in hand, she positions herself in the easy chair by the window. From here, she can see the piano she used to play when her hands were steadier. 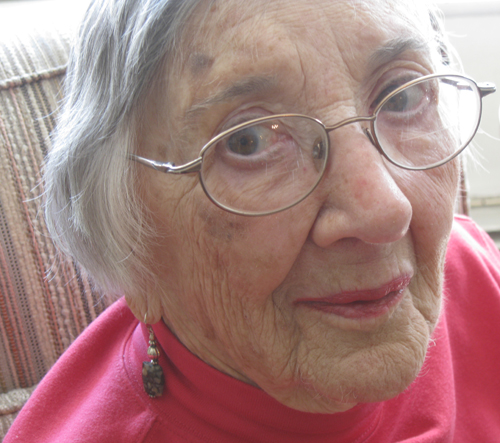 Photo by Nancy A. Ruhling
Henrietta just celebrated her 95th — with champagne.

Ninety-five years is a long time, but it’s not nearly as long as a century.

The pages of Henrietta’s ruled notebook are blank. There’s so much to tell but Henrietta, wife to two, mother to three and grandmother to seven, promises to make quick work of it. After all, she says, her life hasn’t been terribly interesting, even if it has been long.

Henrietta was born and raised in Manhattan, and she came of age at a time when it was a woman’s job to become a wife and mother while still practically a child. It never occurred to her to do anything but follow the crowd.

She did buck the trend by going to college for a spell when she was 16. She intended to major in music, but after a scary bout with typhoid fever she contracted after drinking a glass of infected milk at Coney Island, she quit.

“I realized I would never be a musician,” she says. “I was more mathematical, and that’s the aspect of music I loved. It was 1932, the Depression, and my sister had just graduated from college and couldn’t get a job. So I thought, ‘Why bother with college?'”

She started work at a neighborhood laundry, doing whatever needed to be done, and wound up working a series of small jobs at small companies. 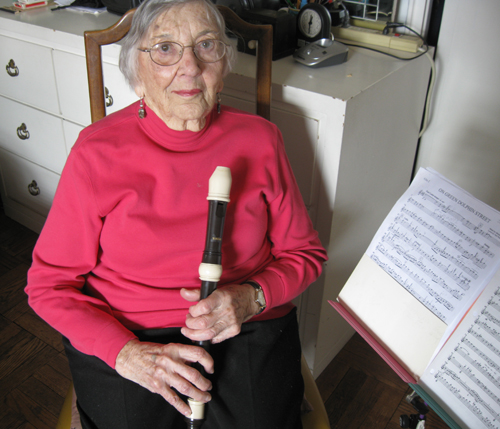 Photo by Nancy A. Ruhling
Henrietta’s passion is playing the recorder.

At 22, she married. “I met him at a Jewish organization,” she says. “I had a tremendous regard for him; he was six years older. I could never understand why he married me. He was a leader of people, and I hung onto his shirttails.”

The love of her life gave his life for his country in World War II, leaving Henrietta with a 1½-year-old baby boy. “My husband barely knew his son,” she says. “It was a big blow, but in the long run, it strengthened me.”

Henrietta, then on the cusp of 30, returned to the work force, as did many war wives. Five years later, she became a bride again. “In those days, people didn’t go to bars; they went to country resorts for the weekend to get dates,” she says.

A nice-looking man caught Henrietta’s eye on one such excursion to the Catskills, and she set out to attract his attention.

“I was taking the bus home, and so was he,” she says. “I got on first, and he sat away from me. So I made an excuse to get off the bus, and when I came back on, I sat down next to him. He was stuck with me for three hours!”

Her ploy worked: they were married a year later and eventually bought the Queensview co-op she’s lived in for more than a half century. 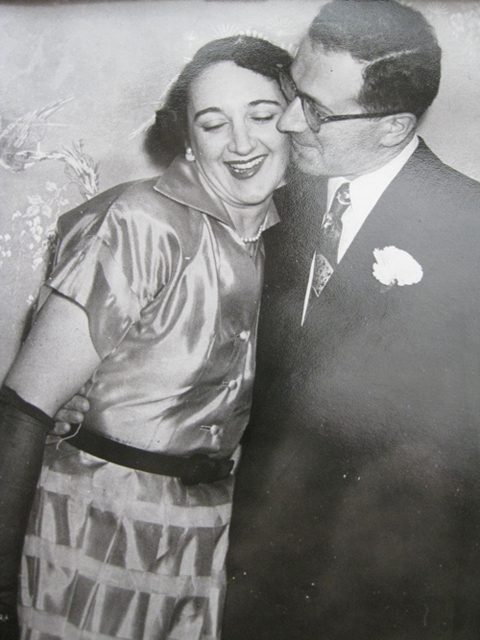 Photo by Nancy A. Ruhling
Henrietta with her second husband, George, at their wedding.

“The reason he married me was because he loved my son, who was five,” Henrietta says. “He was a lot different from my first husband. He was quiet and retiring. We got on well; he was sweet and kind.”

She pauses. Sometimes her words get scrambled like breakfast eggs. She asks for her wedding album, a white leather-bound volume whose black-and-white photos are preserved in plastic covers amber with age.

Where were we? Oh, yes, husband No. Two; here he is in the pictures. His name was… George, yes that’s right. They had a fine life together even if things were not easy financially.

Henrietta had two more children — a son and daughter — and while her husband struggled to make a go of his laundry business, she went back to school, earning a bachelor’s degree in business from Hunter College when her children were little.

She took up teaching with a passion, serving two decades at Bryant High School in Astoria. She also kept learning, earning more than enough credits for a master’s degree that she never chose to pursue.

When George, her second husband died, gosh, it must have been about 20 years ago, she set out to remake herself at age 75. 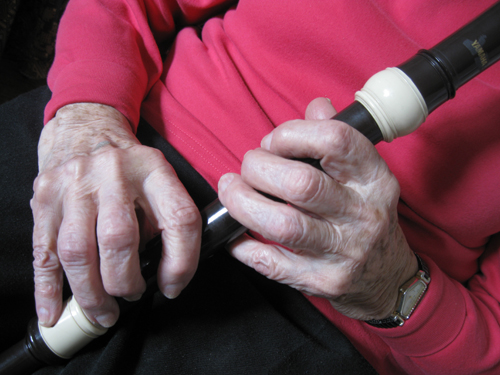 Photo by Nancy A. Ruhling
Her hands aren’t as steady, but she can still play the alto recorder.

She joined the advisory council of Queensview’s Naturally Occurring Retirement Community, and that move saved her life by connecting her with the other older residents of the complex and providing her with services.

“I’m happy I’m able to live in this co-op,” she says, using her walker to get to the back bedroom. “All the things of my life are here.”

Henrietta fills her time by playing bridge with other co-op residents and music with “Stan the Man and His All-Girl Recorder Orchestra.”

“We don’t perform,” she says. “We just practice. It’s swing music, which I love. I’m the oldest one, and lately I only play alto because my hands shake and my lips quiver too much to do the other parts. The recorder is an easy instrument to learn but a difficult one to play well.”

Ten years ago, Henrietta got her first computer, and a little more than a year ago, she took up Mahjong, which was popular in the Roaring Twenties when she was but a girl. “It’s a good game,” she says, “because it requires chance, luck and ability.” 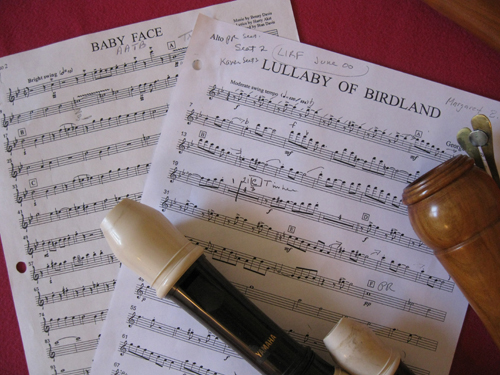 Photo by Nancy A. Ruhling
Henrietta and her recorder band like to play swing music.

She loves going to museums — she has a younger person go with her to give her a wheelchair tour. The theater, well, she’s pretty much given that up because she’s getting a little hard of hearing.

Henrietta is proud that she’s able to get by on her own. She does 15 minutes of exercises in bed every morning then stretches and balances at the kitchen sink to keep her limbs limber. Lately though, she’s needed more help, and she’s tiring more easily. In addition to a cleaning woman who comes every two weeks, she has an aide who spends time with her on weekdays.

“The secret to living so long? I don’t know,” she says, adding that she’s marking her 95th with several more parties. “It’s partly genes — my sister is 98. I try to be an upbeat person, and whatever happens, I try to work it through. The most important lesson I’ve learned is to accept who I am and what I can and cannot do, and that takes a lifetime.” 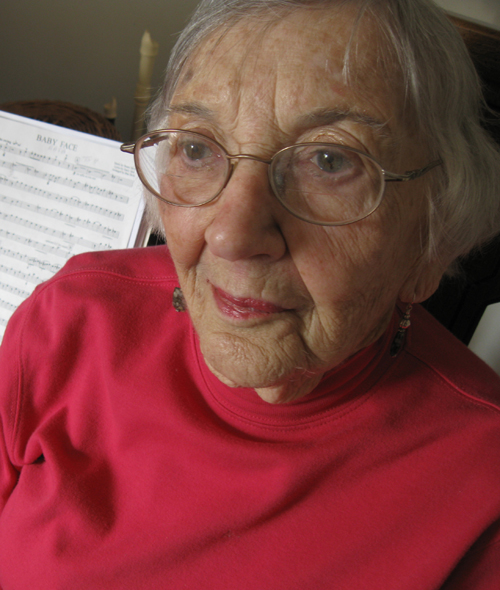 Photo by Nancy A. Ruhling
Henrietta’s looking forward to the next century.

What Henrietta is never going to do is give up. “I can still find a lot of pleasure in life,” she says. “What’s important is to leave yourself open to all kinds of experiences. You don’t know when one thing will become the important thing to attach to your life.”

The sun is out, and the weather is warm. Henrietta is itching to get outside. She can’t walk far, but she’ll do a short turn around the co-op buildings.

No, she’s doesn’t need any help, thank you very much; she’s done this a million times by herself in the last 95 years.