Orlando Anthony Pavich wasn’t expecting morning to come so soon. He’s hasn’t shaved yet or put on a shirt. Zoe, his 2-year-old dachshund, is scurrying around the living room, jumping on the couches. The little hot dog has a big bark and poop the size of grapes.

Orlando was out until 2:30 in the morning, and his coffee table, which holds a vase of dead flowers, a pair of sunglasses, a half-drunk bottle of water, a TV remote and a folded up sign-out sheet for the movie Affluenza, looks like he feels.

God, he’s dying for a cigarette. He shouldn’t have one. He has come down with one helluva hacking cough, and the cigs make it worse. 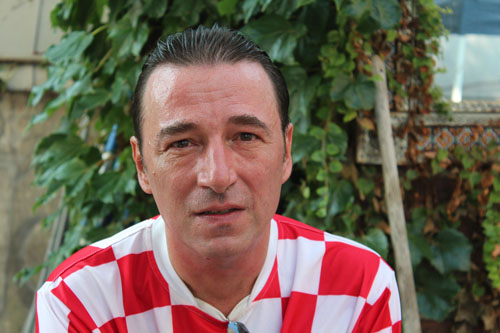 Photo by Nancy A. Ruhling
Can you picture him in pictures?

For the last couple of years, he’s been making his living as a movie extra. Last night, at 5, he was in Coney Island working on Affluenza, and his adrenaline is still racing at warp speed.

“I’m happiest when I’m on the set,” he says. “I love the make-believe of movies.”

The 6-foot-2, 47-year-old Orlando has the look of classic tall-dark-and-handsome Hollywood stars. His slicked-back black hair and intense brown eyes say Clark Gable. Except that Gable didn’t have a wicked black widow tattooed close to his heart. 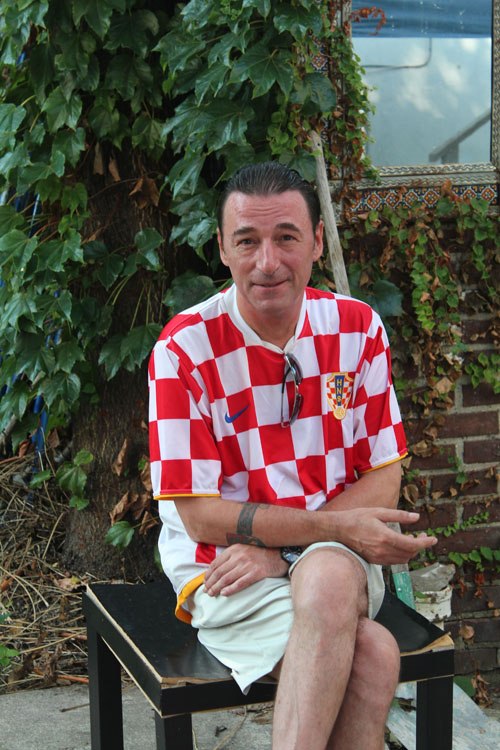 Photo by Nancy A. Ruhling
Orlando used to do decorative painting.

Orlando would have fit right in in old-time Hollywood; in those days, when scriptwriters couldn’t think of a clever line, they used cigarettes as a smokescreen.

Orlando lights up and takes a drag; the swirling smoke clears his head. He swigs Orangina straight from the bottle. 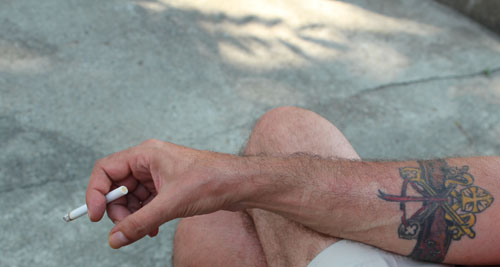 Photo by Nancy A. Ruhling
Orlando carries the Vatican City’s coat of arms on his arm.

He was born in Zadar, Croatia and lived in the nearby small town of Kozino. He has lived in Croatia on and off for long stretches of his life.

When he’s finished shaving, he’s going to put on his red-and-white checkered Croatian National Soccer Team jersey. It’s not the most current one, but it allows him to show his true Croatian colors.

When he was 3, Orlando’s parents fled Croatia under the cover of night. He won’t reveal the reason; it’s better to leave a bit of mystery. 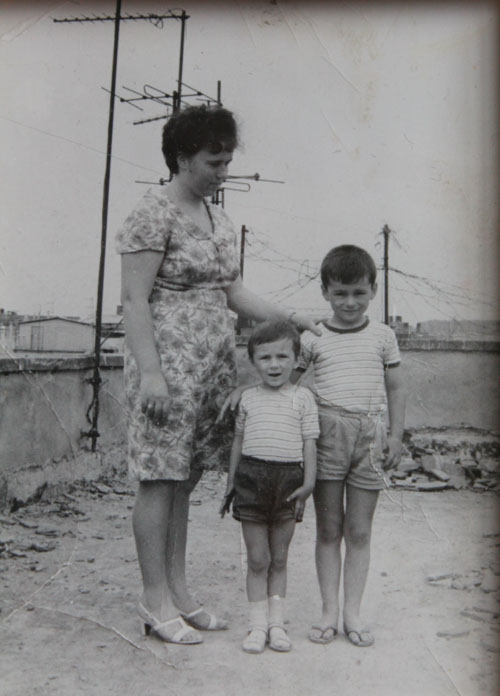 Photo by Nancy A. Ruhling
Orlando with his mother and older brother.

“We came through Rome,” he says. “The Vatican got us an apartment and got my father a job.”

The family then moved to Astoria. His parents bought the house Orlando lives in when he was 15.

The tattoo on his right arm serves a summary of his life: The Vatican City and City of Zadar coats of arms are ringed by a wide band in honor of his dearly departed mother that proclaims, “Mom, there’s no more tears.”

“I chose the images because they are close to my heart,” he says.

This is not to say that Orlando’s religious about religion. 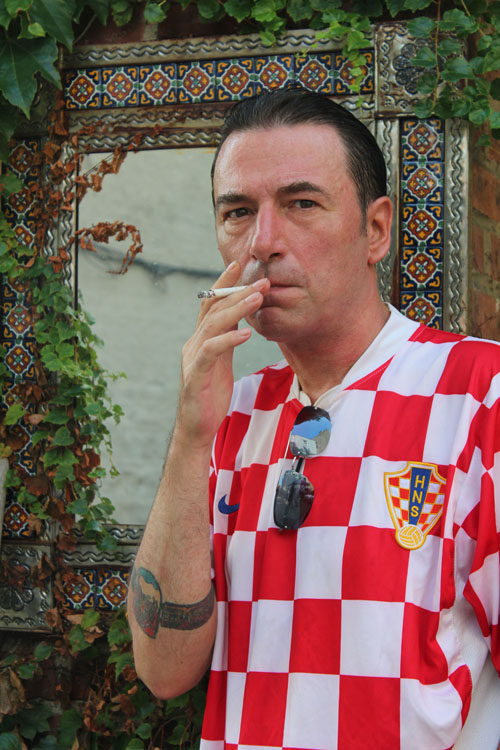 School and Orlando didn’t get along every well. By the time he was in high school, he was cutting classes, but he did manage to earn several credits from Queensborough Community College. He didn’t have a career in mind and ended up doing commercial and residential decorative painting.

“I chased the money,” he says.

He got some pretty high-profile jobs; he painted Robert De Niro’s Tribeca loft and Penny Marshall’s Upper West Side apartment.

“De Niro’s my favorite actor, so I was thrilled,” he says. “But I never got to see him.” 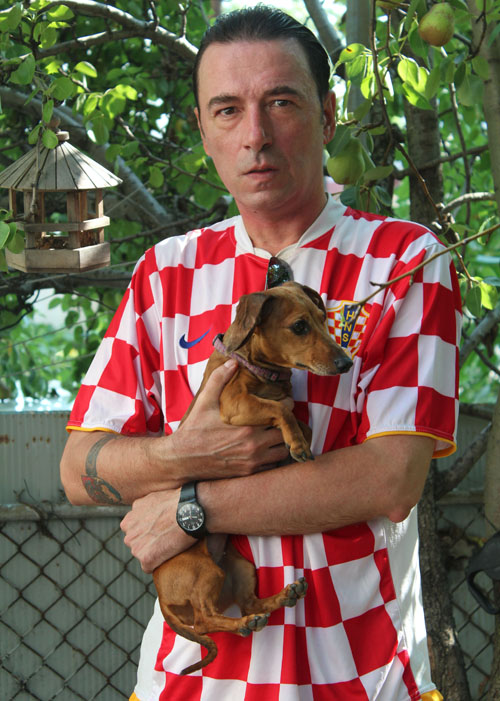 Photo by Nancy A. Ruhling
Orlando as the Boy Next Door.

In 2005, in the wake of the U.S. war on terrorism, Orlando jumped to join the Army Reserve.

“I knew what the war zone in Croatia was like even though I didn’t do any fighting there, and I thought I could be of service,” he says. “Plus, America took my family in, and I wanted to show my gratitude.”

He couldn’t join the regular army because he was too old.

“I was 40. I just made the cutoff for the Reserve,” he says. “The other guys were kids. They used to call me grandpa.”

Grandpa Orlando’s job was to drive a truck. He did basic training but came too late to be deployed with the rest of his unit. His military career was cut short in 2007 when he blew out his knee during an exercise in basic training. 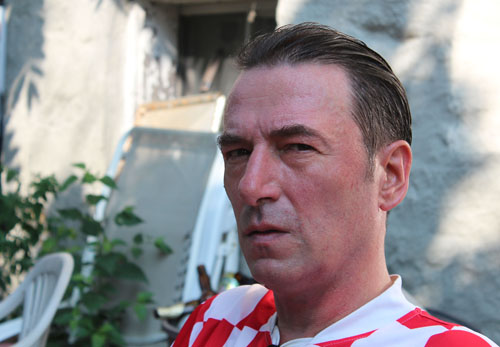 Photo by Nancy A. Ruhling
Orlando as the Tough Guy.

“I didn’t know what I was going to do,” he says. “I couldn’t go back to painting because of my knee. But when I was growing up, my mom used to always say I should be an actor.”

He started signing up to do free gigs and liked the work so much that he wants to pursue it as a full-time career.

“But I need training,” he says. “I’m thinking of going to Stella Adler.”

So far, Orlando’s been an extra in Boardwalk Empire, Smash, Person of Interest, Batman and Spider-Man. He spends a lot of his time on his computer looking for work. 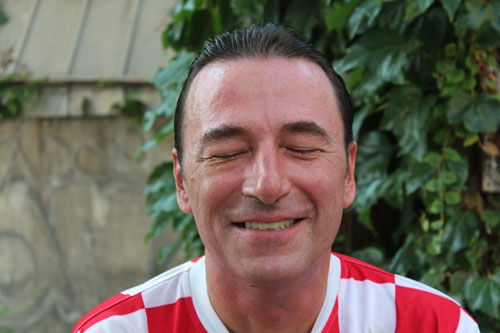 Photo by Nancy A. Ruhling
Orlando as the Mellow Fellow.

“I’m not getting principal parts,” he says, adding that this is a big worry. He ran into a guy recently who has only been doing this for six months.

“He’s getting parts; they like his look,” Orlando says. 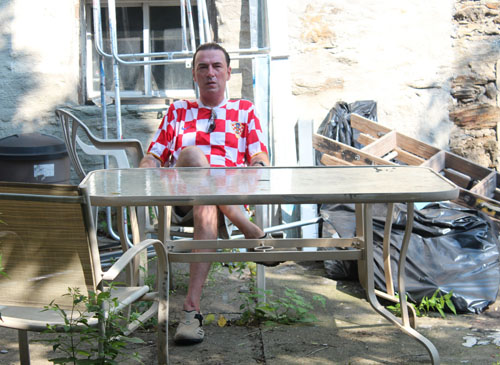 Photo by Nancy A. Ruhling
Orlando center stage in his own backyard.

Orlando’s on Social Security disability. He’s still waiting for his medical discharge from the army. He may be acting to pay the bills, but that doesn’t mean he’s in it only for the money.

“I’d do free work today if it’s something that catches my fancy,” he says. 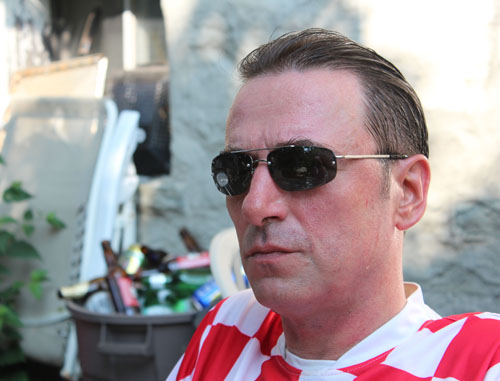 Photo by Nancy A. Ruhling
Orlando, Man of Mystery.

There are some roles he doesn’t see himself ever playing. He’s never been married — he was engaged at one time, but it didn’t work out — and he has no children.

“I’m getting up there in age,” he says. “I don’t see either of those two things happening.”

He stubs out his cigarette and picks up Zoe, who tries to wiggle out of his arms.