Luisa Radeschi‘s been carrying the photo around for as long as she can remember. She just turned 94, so it’s safe to say that it’s been going on 70 or 80 years.

She digs through her black handbag and brings it forth. The hand-size print, resting in a simple plastic slipcover, is as wrinkled as a prune.

The people in the photo are her family. Her mother had already died when it was taken, so it shows only her, her father, her brother and her sister.

Luisa is the little girl on the left. And she’s the only one left. 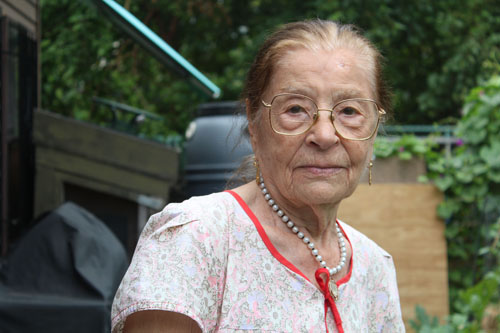 Photo by Nancy A. Ruhling
Luisa is 94 and counting.

“Having it makes me feel closer to them,” she says as she puts it safely back.

The photo that Luisa holds so dear was taken when she was 3. It was for the family’s passport, the one that would take Luisa from Argentina to Italy, the homeland of her parents.

“My parents met in Argentina,” she says. “My mother had family there, and my father went there when he was 14.” 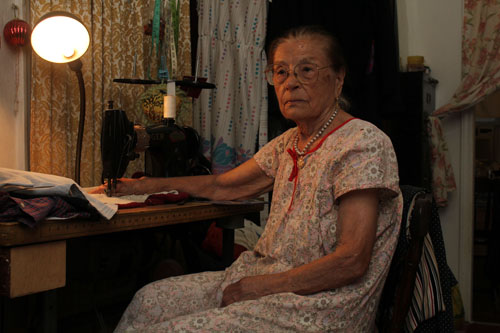 Photo by Nancy A. Ruhling
Luisa worked as a seamstress; she retired at 77.

Her mother’s death, ah, that’s why they were leaving. Her paternal grandmother, in Filetto, was going to take care of them. They were going to live on her farm. And life was going to be as good as a pot of lentil soup.

Luisa, a feather with owl-eye gold glasses and a rim of red hair, spends a lot of her time cooking; her lentil soup, which she promises to make soon, also has lima beans, celery and tomatoes.

In 1927, when Luisa was 9, her father died, and she stopped going to school. She didn’t get a job. She simply worked on the farm. Then, in 1937, when World War II was starting to gear up, her grandmother passed away.

So the five had been reduced to three, but at least they had each other.

“My brother was in the war, but he didn’t come home,” she says. His military photo hangs prominently in her bedroom. 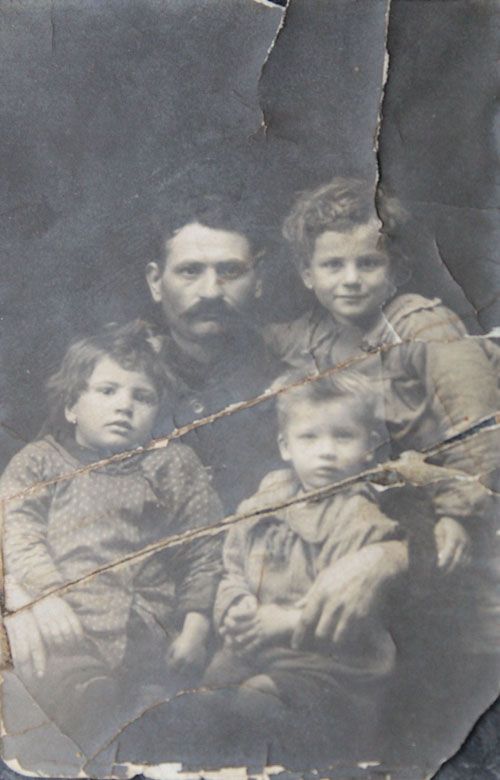 Photo by Nancy A. Ruhling
Luisa, left, at age 3 with her family.

The sisters stayed in Italy until 1951, when they got six-month passports to come to New York. Luisa took up dressmaking and throughout her career worked for some of the biggest houses in the business, including Bill Blass, Ralph Lauren and Oscar de la Renta.

She’s always had a flair for fashion. Today, Luisa has accented her 1950s print housedress and ruby-red embroidered slippers with a pair of gold dangly earrings and a pearl necklace.

In 1967, God saw fit to take her sister, and Luisa was called upon to take in her 9-year-old boy. 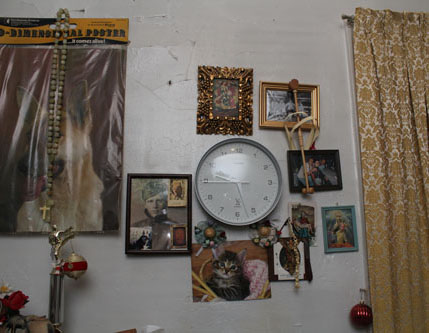 Photo by Nancy A. Ruhling
Luisa’s bedroom wall is filled with her favorite things.

“My nephew went to school while I was at work,” she says. “I never got married because I worked too much. I had to work a lot — who else was going to pay the rent?”

In 1995, when she hit 77, she retired her sewing machine. She spends most of her time cooking and cleaning; you could eat her lentil soup off the floor.

She’s comfortable in her one-bedroom apartment, probably because she’s lived in it for more than a half century.

It looks much as it did when Luisa moved in in 1960. It’s railroad style: The front door opens to a space that fits her small kitchen table, whose old-fashioned cloth is covered by a layer of thick protective plastic. There’s a mop in the corner. The kitchen is on the right. 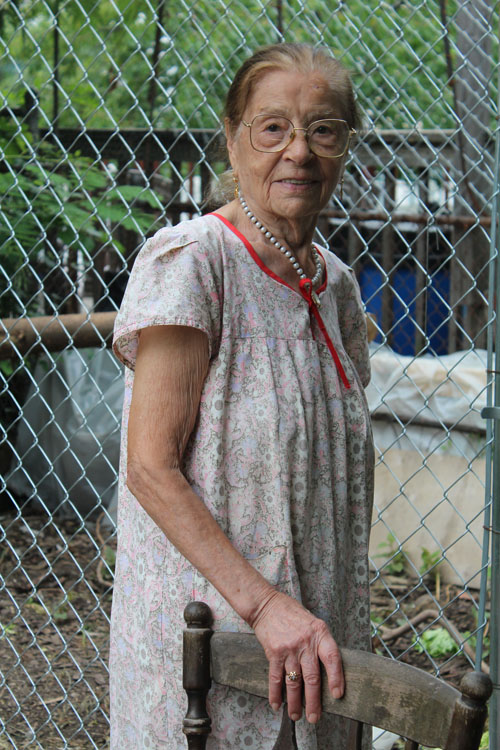 In the next room, the refrigerator is next to Luisa’s modest twin bed, which is positioned so she can watch the TV, which is playing in the background. Luisa offers a glass of orange juice.

The linoleum floor, a checkerboard of grey and red, looks as though it were laid a week ago. There’s an ancient Singer sewing machine, whose age Luisa can’t recall, but it’s likely they entered this world about the same time.

Beyond this room, there’s another that Luisa seldom goes in. It’s mainly for storage. There’s a lot of stuff in there; someday, she’ll get around to looking through it. 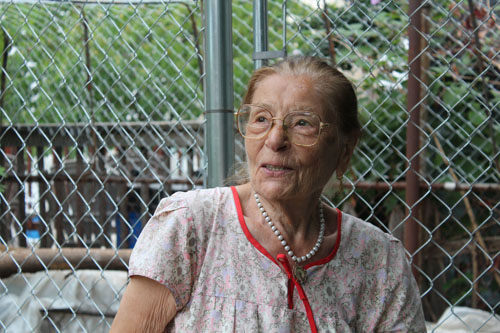 Photo by Nancy A. Ruhling
Luisa doesn’t need anyone to take care of her.

But the things she loves are in her bedroom/living room. There’s a poster of a cute kitten, the military photo taken of her brother and a newfangled clock that switches itself on and off Daylight Saving Time all by itself. Luisa is quite taken with the technology of it.

“I take care of myself,” she says.

She doesn’t have to add that there’s no choice because there’s no one to help her; her nephew lives in Florida. 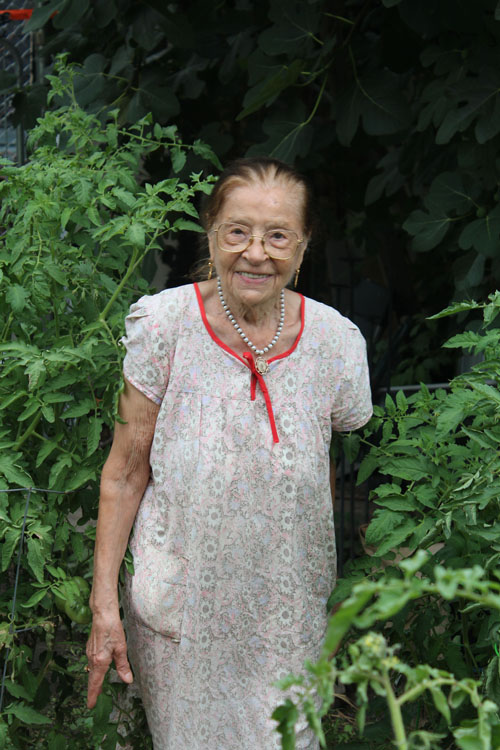 Photo by Nancy A. Ruhling
Luisa loves to cook; try her lentil soup.

“I don’t take any pills,” she says, adding that she has to walk a little slowly or she loses her balance.

Sometimes her mind fogs over.

“I forget things even when I write them down,” she says. 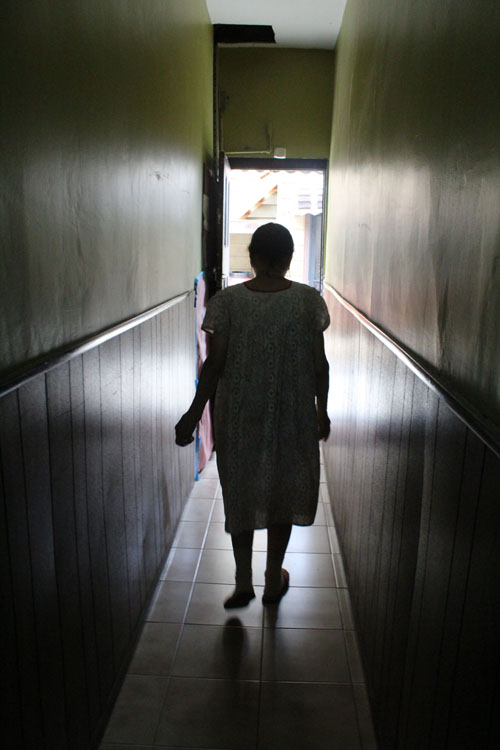 Photo by Nancy A. Ruhling
Each year, she says, has been a good one.

If she’s lonely, she doesn’t let on. She likes to keep busy. When the spirit moves her, she goes to Our Lady of Mount Carmel church; she usually gets there twice a month. Sometimes, she turns on the Singer to do some mending.

Age makes her wake early; she’s up with the chickens and doesn’t find time to close her eyes until 10 or 10:30 at night.

“I don’t know why I haven’t died yet,” she says. “God doesn’t want me yet — he takes the good people first.”

She puts the bags of lima beans and lentils back in the kitchen. She’ll call the day she makes the soup.