Walter “Wally” Boot finds himself fine-tuning a Steinway, and it’s all because of a blue suit he needed a half century ago.

Back in the dog days of the summer of 1962, the aspiring industrial art designer had a big job interview. That’s why he wanted the suit. But he was only 18. He didn’t have any cash; the only thing he carried in his jeans pockets was hope.

So he walked the two blocks from his family’s railroad apartment to the 11-acre Steinway & Sons factory and applied for temporary work. It was the logical choice. He had grown up playing around the factory, and lots of people in the neighborhood, including his three older brothers, had jobs there. 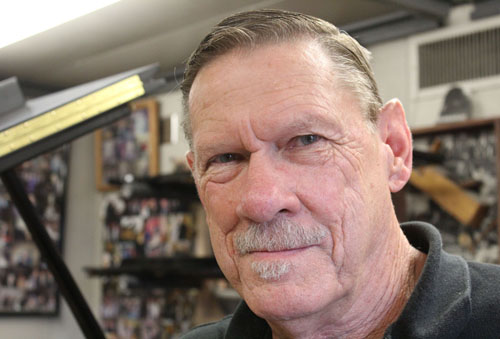 Photo by Nancy A. Ruhling
Wally has been with Steinway & Sons a half century.

“I remember when my friends went swimming on the property,” he says. “I didn’t know how to swim, so we took some wood from the factory and built a raft for me.”

It turned out that Wally and Steinway & Sons were so in tune with each other that Wally never had to buy that blue suit because he never left the piano factory. 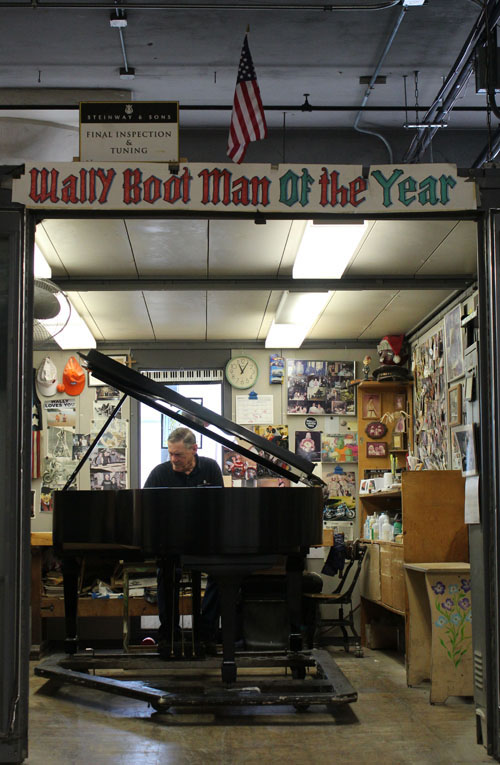 Photo by Nancy A. Ruhling
Wally at work, playing.

On Aug. 28, he became one of the few factory employees in the history of the company, which was started in 1853 and moved operations to Astoria in 1870, to hit the half-century mark. At 68, he’s the fourth-oldest member of the Steinway “factory family,” which numbers 300. (More photos.)

Fifty years! That’s quite an accomplishment considering that Wally was given up for dead the day he was born. 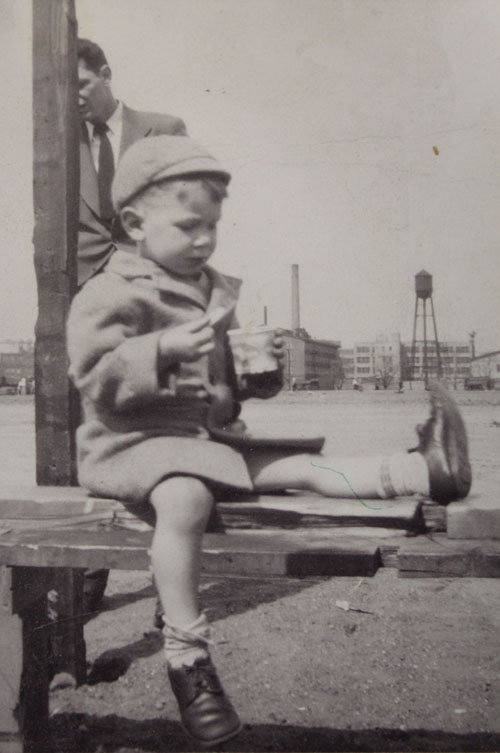 Photo by Nancy A. Ruhling
Wally, about 3, outside the piano factory.

“The umbilical cord was wrapped around my neck, and the midwife told my mother I didn’t make it,” he says. “They put me in the sink. My sister saw me moving and pulled me out.”

Wally’s held a variety of jobs at the 440,000-square-foot factory — his first one was at the keyboards putting the white felt on the let-off buttons — and finally ended up where he sits today in the tone-regulation department. His hands are the last to touch the keys of each piano before it is sent to its owner. 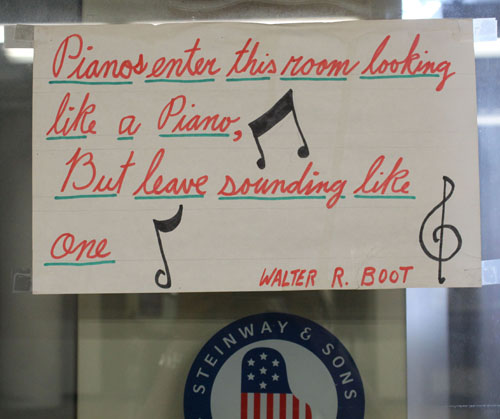 “You can think of what I do like baking a cake,” says Wally, a serious fellow who can’t stop himself from breaking into a smile. “It’s all finished when it gets to me, and I put on the icing.”

Wally met his wife, Mary, in the neighborhood. He was 28 to her 19 when they married. More than three decades ago, they moved to Selden, which is way out on Long Island, to raise their daughter and twin sons. It’s a schlep — it’s 55 miles away, and on a good day, the commute takes more than an hour.

“She made a family man out of me,” Wally says. “Before her, I was a really wild guy.” 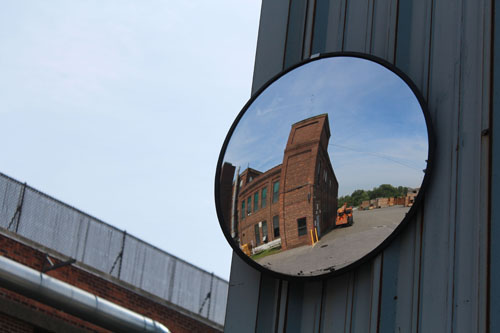 Photo by Nancy A. Ruhling
One of the older factory buildings.

In the good old days, when more people were playing, Wally worked on 10 pianos a day; now, he does five, spending 1 ½ hours on each.

His glassed-in office is plastered with hundreds of photos of him and his family. There’s one of him, long beautiful hair down to his shoulders, standing on a motorcycle like a stunt man. He could have played Dennis Hopper in Easy Rider. The stars-and-stripes suede vest he wore hangs on his office wall like a piece of art. Its fringe is as long as a yardstick.

“I was a hippie,” he says, a hint of wistful nostalgia creeping into his voice, which plays pianissimo. 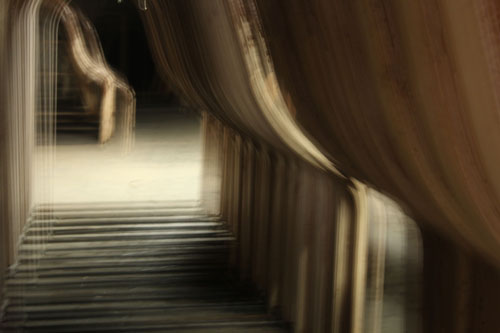 Photo by Nancy A. Ruhling
Pianos in production.

In one corner, there’s an ancient wooden cabinet whose double doors open to reveal a trove of tools. Some he bought; others came from his piano predecessors.

Wally doesn’t have a musical background, and he didn’t learn to play the piano until a couple of years ago.

“One of the tuners here gave me lessons,” he says. “He taught me on our 15-minute breaks.” 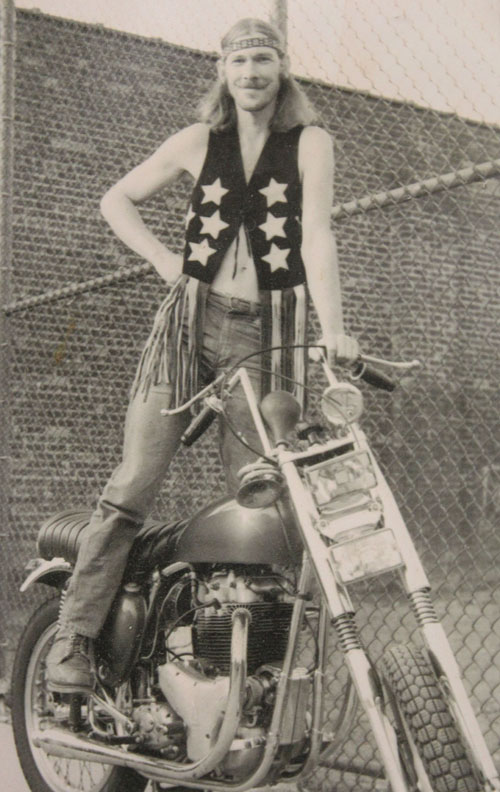 Photo by Nancy A. Ruhling
Wally in his wild hippie days.

He starts playing Beethoven’s “Moonlight Sonata;” his fingers glide over the ebonies and ivories like hummingbirds. Then he segues into Simon and Garfunkel’s “Bridge Over Troubled Water.”

Wally loves playing the piano; next to working for Steinway & Sons, it’s probably his favorite thing. He bought a Poole spinet that came into the factory as a trade-in some two decades ago. 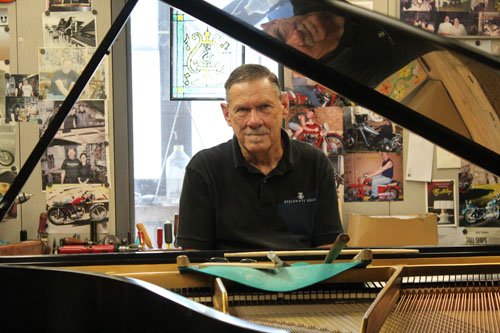 Photo by Nancy A. Ruhling
Wally has a fine way with every Steinway.

The spinet sits silent. Wally doesn’t have much time to play at home, which probably is a good thing because Mary doesn’t much like the noise his flying fingers make. 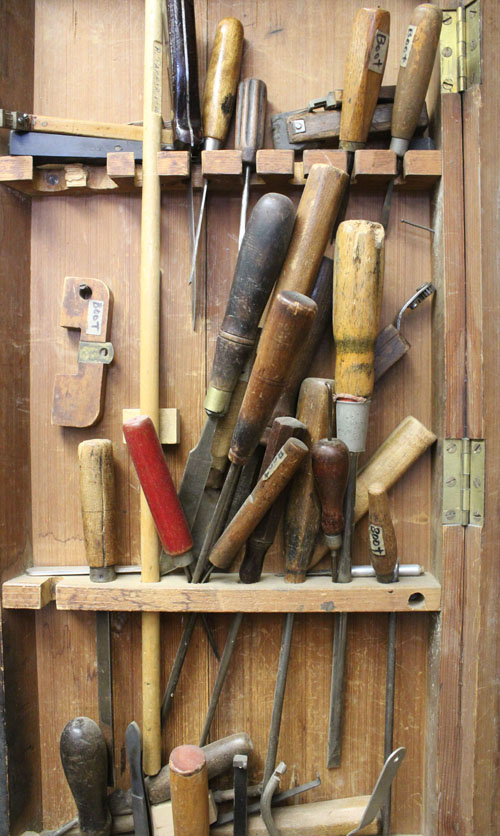 Photo by Nancy A. Ruhling
Many of Wally’s tools are antiques.

She may have a point. Several years ago, when Steinway & Sons honored him with an annual award, Wally took it upon himself to make a gigantic handwritten sign that proclaims in loud red and green Gothic script: “Wally Boot Man of the Year.” It has hung over his office door ever since.

And Wally didn’t have to be persuaded to play the big star at the big party Steinway & Sons threw for him on his anniversary date. Nobody else during his tenure has hit the big 5-0, and he can’t remember such a huge celebration for anyone else for any reason.

The whole factory was treated to ice cream, and Wally got to sit in a big armchair in the loading dock while everyone lauded his legendary longevity. He’s looking forward to being feted again in October, at the company’s annual dinner. 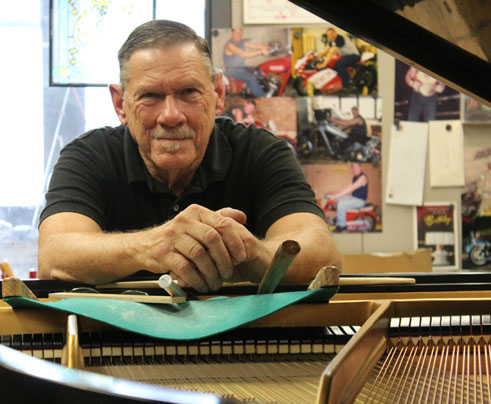 Photo by Nancy A. Ruhling
Wally became a player after age 65.

Wally, who wears his Steinway & Sons ebony shirt proudly, is just two decades shy of matching the 88 keys on the piano. Mary wants him to retire, but he’s having none of it. He’s looking forward to tuning Steinway’s 600,000th piano, which is slated to be in production sometime in 2014.

“I love working here,” he says. “I get letters and cards and gifts from piano owners all the time; they tell me they love their pianos and the work I do.”

Someday, Wally would like to own his own Steinway. For now, though, he’s content to play the ones he works on.