With the gracefulness of the dancer she once was, Malini “Mala” Ekanayake primly sits on the park bench, puts her feet together in perfect alignment and closes her big, brown eyes.

While she meditates, the physical world vanishes. She’s not in Astoria Park or Sri Lanka, her home country, any more. It’s 6 a.m., and this is her second meditation of the day. She’s been in the park exercising since 5 a.m., and she’s been up since 2. It helps that she calls it a day at 9 p.m.

Mala — that’s her pet name — has lived in Astoria only since February, when her daughter insisted she come to America for an extended stay. In Sri Lanka, children take care of their aged parents; Mala wouldn’t think of saying no. 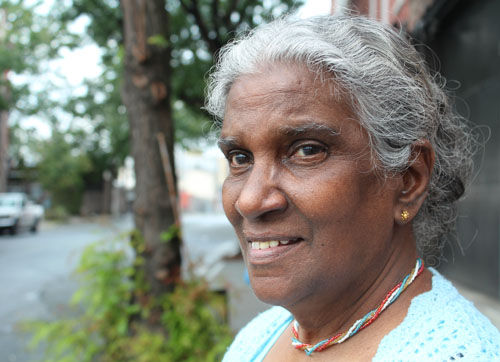 Photo by Nancy A. Ruhling
Mala is a native of Sri Lanka.

Mala’s 72 and retired, and what with the death of her husband four years ago, there was nothing holding her to the house she had lived in since her marriage a half century previously. She left it in the hands of one of her sons.

Mala, whose big grey braid gives her the look of a schoolgirl, speaks the King’s English very properly in a sing-song British accent. It’s her second language after her mother tongue, Sinhala. She learned it all the way back in secondary school. She has some slight trouble understanding New York accents and apologizes for that.

She takes a plastic ID card out of her purse. In handwritten printed letters, it lists her name, address and phone number in case she gets lost. Her daughter made it for her. So far, she hasn’t had to use it. 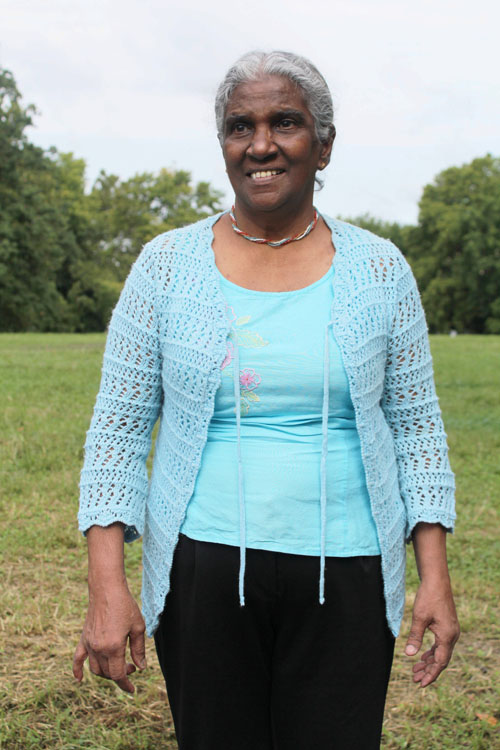 Photo by Nancy A. Ruhling
Every morning, Mala is in Astoria Park.

Mala was born in Hatton, an “upcountry” town in the former British colony that was then called Ceylon, the island nation that looks like a teardrop shed by India.

She was the youngest of nine children; her father worked on a British tea plantation, and her mother stayed home to care for her and her four brothers and four sisters. Her Sinhalese family, whose members hailed from the city of Kandy, was of a high caste, a status that allowed them to live in a British bungalow.

Mala was born on the cusp of change; when she was 8, Ceylon became independent, and Sri Lanka would be her great liberator. All but one of her sisters had arranged marriages, and they became housewives.

“There was a band close to my house,” Mala says. “I always heard the drumbeat and danced to it.” 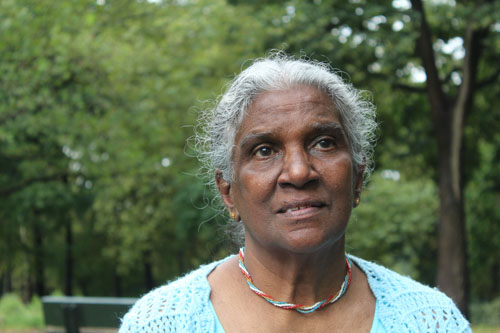 The beat got to her feet, and she enrolled in a teacher training school, where she learned not only traditional upcountry dances but also music and art. At 19, she was offered a job as a dancing teacher with a school that had a traveling troupe that taught traditional steps and wore traditional garb.

“In my country, at that time, it was a big thing for a woman to have a job at that age,” she says proudly. “I not only could dance, I also could play the drum.”

She taps a tattoo to show her skill. 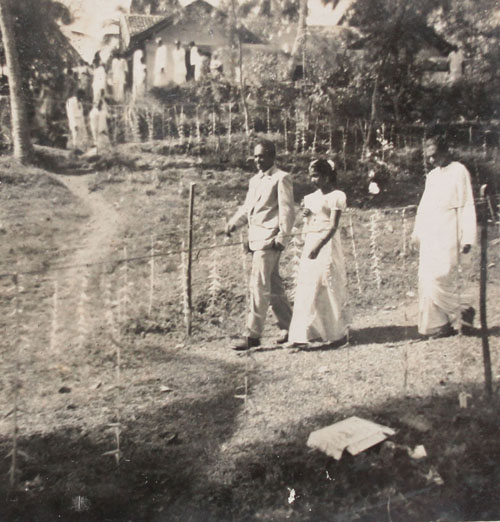 Photo by Nancy A. Ruhling
Mala, 22, on her wedding day walking with her groom.

She fell in love with a fellow who worked in the police department, and they were married when she was 22.

“He was 11 years older, but he looked younger than I,” she says.

They set up house in Kegalla, a big town nearly 50 miles from the capital of Colombo, and had two daughters and three sons. When the children were young, there were servants, but when they got older, Mala took on the household responsibilities. 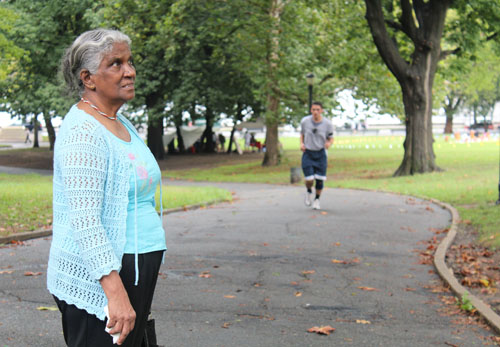 Photo by Nancy A. Ruhling
Mala lives with one of her daughters.

She continued to teach, and after three decades at the same school, she took a job with an international school.

“I was to be a dance teacher, but they saw my talent and asked me to teach Buddhism in English,” she says, adding that she eventually became a vice principal.

When she did retire, 15 years later, she became a preschool principal at the local Young Men’s Buddhist Association, a post she held for three years. 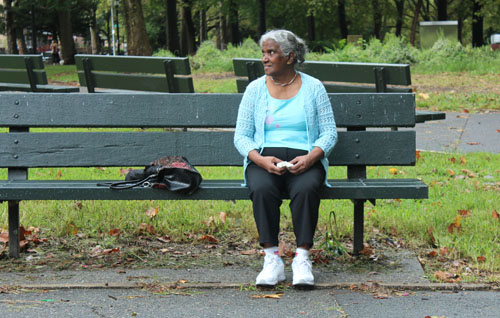 Photo by Nancy A. Ruhling
In her free time, she studies the Buddhist religion.

After that, she really did stop working and devoted herself to her Buddhist religion, a practice she has continued in Astoria.

She spends her time meditating and following Buddhist discussions on the Internet. She’s also an avid watcher of Judge Judy and Dr. Phil. While her daughter and son-in-law are at work, she cooks supper for them; on the weekends, she does the laundry and helps with household chores.

“In Sri Lanka, cooking is very hard and takes a long time,” Mala says. “Here, everything is easy to get. I cook a lot of rice and curries.” 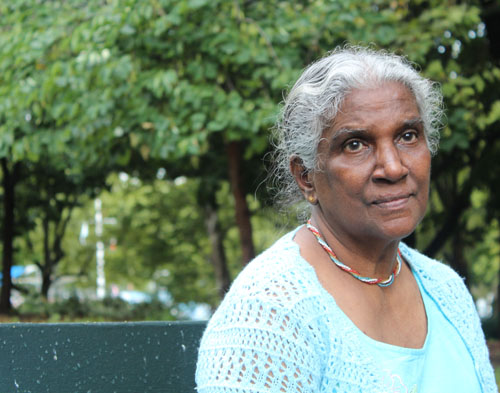 Photo by Nancy A. Ruhling
The future? For Mala, it’s the present.

Mala doesn’t dance any more. “I don’t have the time,” she says. “And I’m really not interested in it now.”

There are so many new things to learn in this new country. Her daughter just taught her how to use the subway. Up until then, Mala had been walking everywhere. Can you imagine that?

“Sometimes, it took me two hours to get to where I wanted to go,” she says.

Mala has her Green Card, but she doesn’t know how long she’ll be staying in Astoria. Her other children — three are in Sri Lanka and one is in Australia — also want her to stay with them full time.

“I’m not making any plans for the future,” she says. “Wherever I am, I can live happily.”