The tail of the “Y” went missing at Rudy’s Hobby Supplies. Sometime in time, someone painted it in to match the rest of the bright cobalt name on the 3-D sign.

It’s an expert stroke of brushmanship, so this flat portion isn’t noticeable from the street.

The left plate-glass window of the shop (Trains-Models-Paints-Magazines) on 30th Avenue is filled with rosaries, car magnets bearing the engraved images of saints and statues of Mother Mary and Jesus in various pious poses. 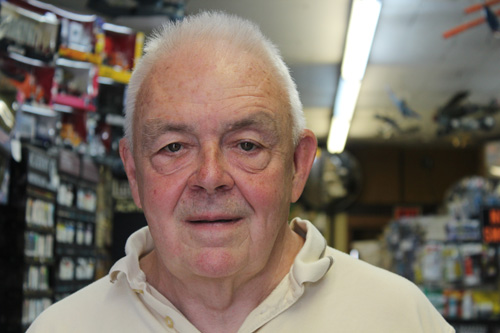 The window opposite, its mirror image, contains two giant sunflower-yellow piggy banks, the kind you have to break open to count your pennies, plastic cars (the doors open!), airplanes, New York City buses that fit in your hand and boxed sets of scary stuff like The Bride of Frankenstein, a plastic set that is made to be assembled on the spot.

Rudy’s is the only extensive, eclectic hobby shop left in Queens, and surely it is the only one in the world that sells crosses and holy water right alongside jigsaw puzzles and plastic toy soldiers. 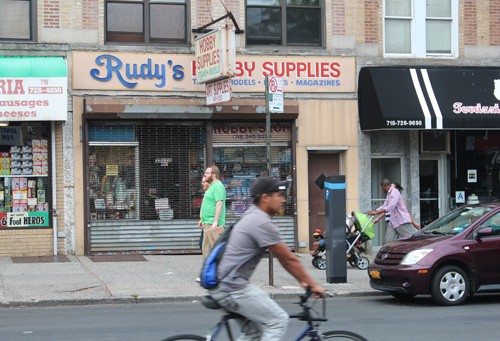 Photo by Nancy A. Ruhling
Rudy’s is a fixture on 30th Avenue.

Marvin Cochran has been with Rudy’s since 1958, when he married Teresa, who was born in the building that houses the storefront and four apartments. Her German immigrant parents opened the shop in the late 1930s as an ice cream parlor. Rudy’s was named for her father, and his namesake sign is a copy of the original.

Marvin, an only child, was born on City Island and spent several years of his boyhood in Selden, a sleepy hamlet on Long Island. He met Teresa when she walked into the stationery store his parents owned. He wound up getting a bride and a business. 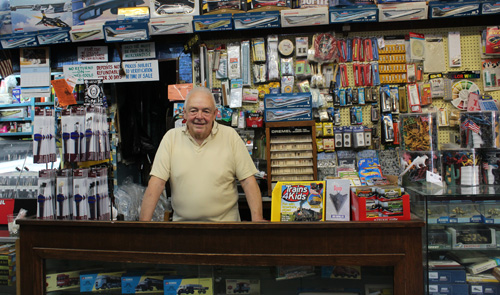 Photo by Nancy A. Ruhling
Marvin mans the main counter.

“I was driving a truck, but it wasn’t steady work,” he says. “Working at Rudy’s wasn’t my favorite choice, but it was a decent living.”

A customer walks in and asks for some paint; Marvin directs him to the middle of the shop, where model airplanes wing their way across white clouds of acoustic-tile ceiling. 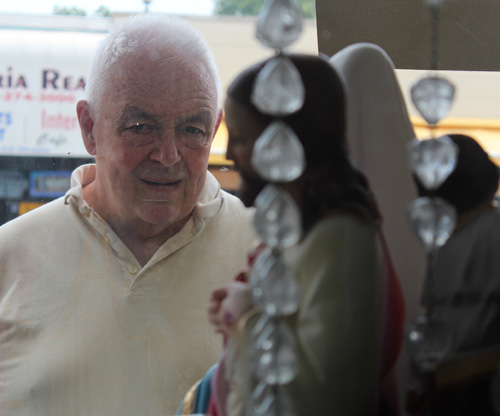 Photo by Nancy A. Ruhling
It was Marvin’s idea to make Rudy’s a hobby shop.

The old wooden candy counter of Rudy’s, the ice cream parlor, is buried behind the glass display cases; its shelves are stacked with the stuff hobbies are made of. It’s a narrow space, and if Marvin turns sideways, he can get back there all right.

All that remains of the grill where Marvin used to make sandwiches are the glittering blue-mirror tiles that framed it; each is the size of a stick of chewing gum. 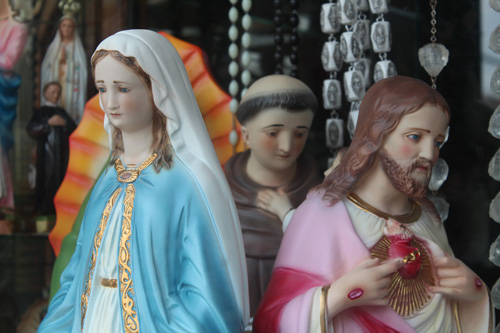 Photo by Nancy A. Ruhling
The religious statues were added later.

The holes in the original floor mark the spots where the stools of the soda fountain counter used to cool their heels. A silver dollar would fit in each nicely.

“We had a couple of people helping us part time, but we did almost everything ourselves,” Marvin says. “We made our own ice cream and molded our own chocolates for the holidays.” 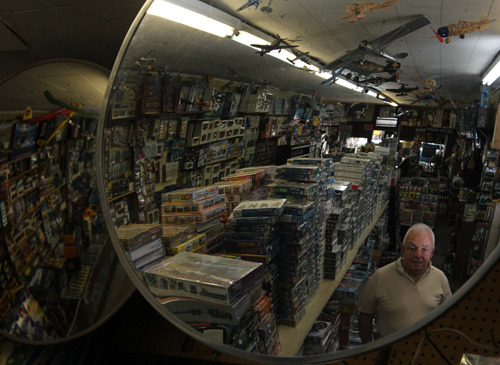 Photo by Nancy A. Ruhling
The inventory is stacked to the ceiling.

Marvin and Teresa took over the shop in 1963. In the 1980s, when it came time to replace the equipment, they started to convert it to a hobby shop.

“The soda fountain was marble, and nobody could guarantee that they could put it back together again,” Marvin says. 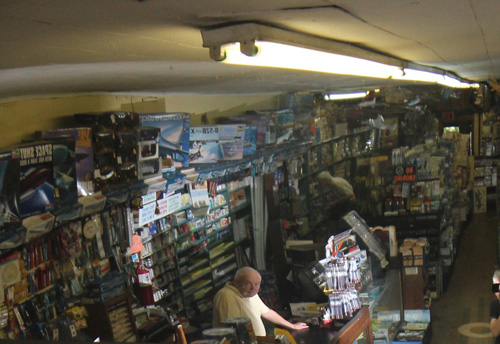 Photo by Nancy A. Ruhling
Rudy’s became a hobby shop in the 1980s.

Marvin, an avid train collector, started bringing the railroad cars in. He figured it was a safe bet because no other shop was selling them. Over the years, the sandwiches and ice cream sodas gave way to artist paintbrushes and model battleships.

“It was the right decision,” he says. “I’m not much of a people person, and the hobby store is a happy business.”

Another customer stops in; no, Rudy’s doesn’t sell comic books. But it does sell books. In fact, Marvin has set aside a few for a young man who comes in a few minutes later. 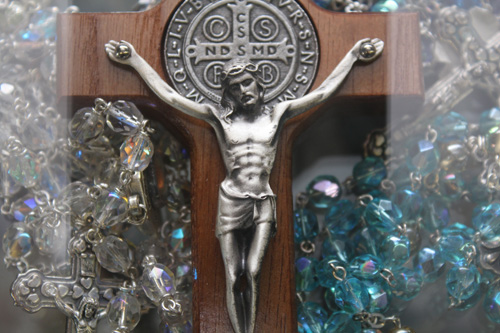 Photo by Nancy A. Ruhling
A one-stop shop for planes, trains and crucifixes.

The religious artifacts, well, they were an afterthought.

“We always went to flea markets, and we started to sell the excess things here,” he says. “Any religious item we brought in would sell right away, and then people started asking for them. At the time, nobody else was selling these things.”

Marvin, who has a fringe of grandfather-white hair and the legs of a strong young man, just turned 75, and these days, he only keeps Rudy’s open four days a week. 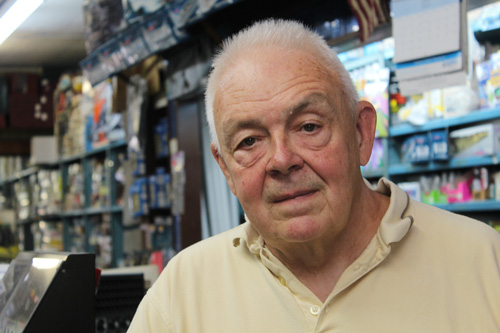 “I’ve made a fairly good living,” he says. “But now I’m just paying my day-to-day bills.”

His son and daughter have their own careers, and someday — “not in the near future,” he insists — Rudy’s will be no more than a memory. He looks sad when he says this. 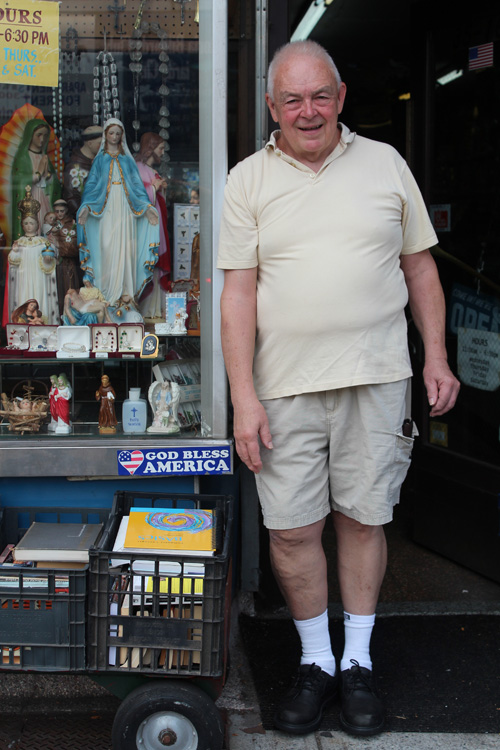 Photo by Nancy A. Ruhling
Marvin takes a break between customers.

Marvin doesn’t have any plans to retire — why should he? Running Rudy’s has become his hobby.

“As long as I feel well, I’ll be here,” he says, adding that he has the best commute — he lives around the corner. “I figure this is what is keeping me healthy.”

The phone rings. “Yes, I have that,” he says excitedly to the caller. “Come on over. I’ll be here until 6.”