The Rev. Dwayne L. Jackson is standing tall in the pulpit staring at the empty pews. The First Reformed Church of Astoria, the red Gothic Revival building wedged between the houses of 12th Street like an afterthought, holds 300 faithful.

On a good Sunday — there are no bad Sundays or any other days of the week in Dwayne’s mind — attendance has never topped 50.

Today’s Saturday, the day Dwayne puts the finishing touches on his sermon, so the fact that he’s alone with God doesn’t bother him.

He happens to look heavenward, and that’s when it hits him like a lightning bolt: If one of the ancient electric fans on the soaring, sky-high ceiling needs fixing, he doesn’t know how he’s going to get up there to do it.

The Lord may have rested on the seventh day, but Dwayne doesn’t. Even if there were an eighth day, he’d be doing God’s work. 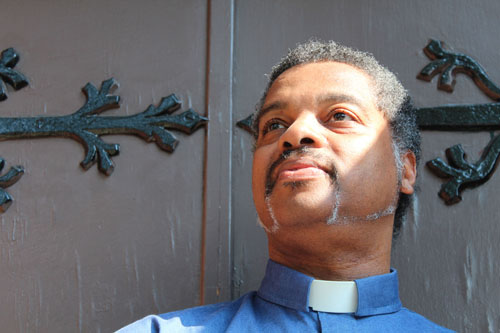 Photo by Nancy A. Ruhling
Dwayne, the minister at The First Reformed Church of Astoria.

Dwayne’s gone all the way up to the belfry to get the church bell ringing again, and he has managed to get the antique pipe organ to keep pumping out its music. But this is different. He doesn’t have a 50-foot ladder.

“We’re a poor church,” he says, adding that he has no staff to help him. “There’s nothing I haven’t done to keep it going.”

The First Reformed Church of Astoria is celebrating its 177th anniversary. It was started informally on Oct. 12, 1835, when another Jackson, Andrew, was president of America, and worship services have been held in the present building, which has a Queensmark award from the Queens Historical Society, since 1888. (More photos.) 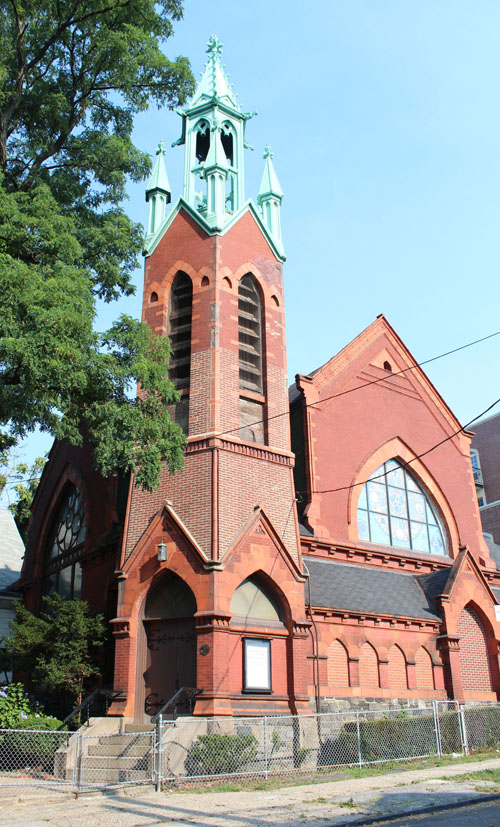 Photo by Nancy A. Ruhling
The current church building was erected in 1888.

The polished pews, the pulpit, the pipe organ and some of the other furnishings were from the original white-frame church, which was damaged in a fire a little more than a half century after its cornerstone was laid in 1836.

The drum kit and the tambourines that are next to the stacks of Good News Bibles are new. They are part of Dwayne’s attempt to get younger people to sing the praises of the Lord.

Dwayne is a big man with a bountiful voice. He’s wearing his clerical collar in a blue short-sleeved shirt. Wristwatch and wedding band on the left are balanced by 10 silver bangle bracelets on his right arm. 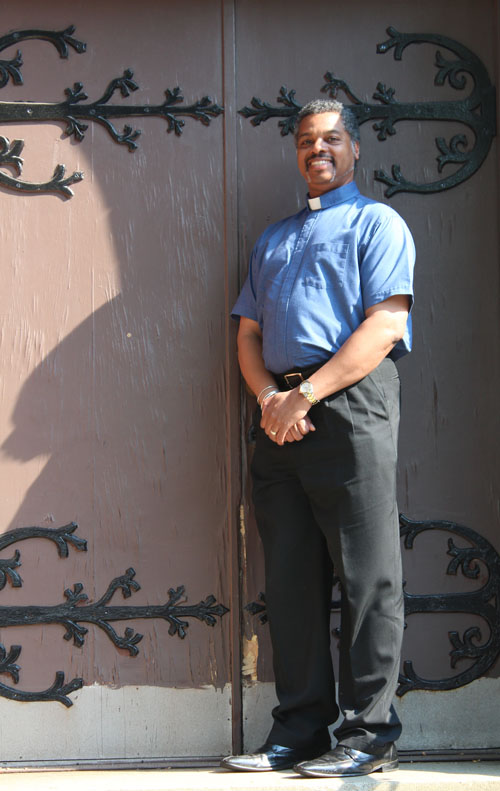 Photo by Nancy A. Ruhling
The church is Dwayne’s first assignment.

The 19th pastor in the church’s history, Dwayne started filling in in 1998 and became full time in 2000. He loves the “big, beautiful old church” just as much as he loves God. His is a full-time pastorship with part-time pay; to make ends meet, he works as a part-time computer service technician for the New York City Department of Education.

The fact of the matter is that Dwayne didn’t have any intention of becoming a preacher. “I blame God,” he says and laughs. 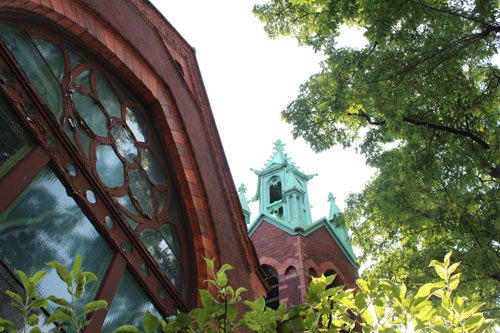 Photo by Nancy A. Ruhling
The church casts the block’s most significant silhouette.

He and his three siblings grew up in the Patterson Housing Projects in the South Bronx. It was a rough area, and the Mott Haven Reformed Church became a safe haven from the drug dealers and gang leaders who all but ruled the neighborhood.

“My parents didn’t go to college, but they pushed us to go far,” he says.

Going to night school while working full time, Dwayne earned a bachelor’s degree in electrical engineering, with a minor in computer science, from New York Institute of Technology. It took him eight years. Around the same time, he got interested in the church and earned a master’s of divinity degree from the New Brunswick Theological Seminary. 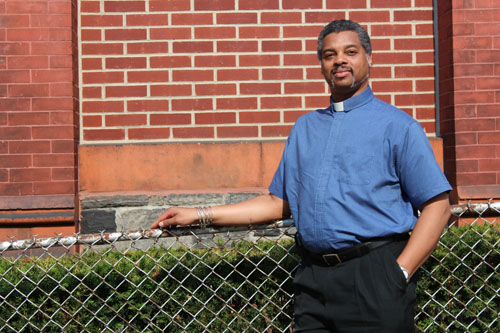 Photo by Nancy A. Ruhling
Dwayne is a constant presence in the neighborhood.

“In the beginning, all I wanted to do was learn to read the Bible better,” he says. “But a pastor at Mott Haven encouraged me to become a preacher.”

He felt called to the Astoria church, which has been his first and only assignment. “I came here after the congregation had a bad divorce from its pastor,” he says. “People were upset and broken; it was my hope to get them to heal. They loved me and my mistakes — I was new, I made a lot of them.”

It’s a minor miracle that Dwayne has managed to keep the church up and running. Old buildings like it always need a lot of new things. The congregants’ contributions, which amount to nearly $80,000, fall short of the church’s $102,000 bare-bones operating budget. 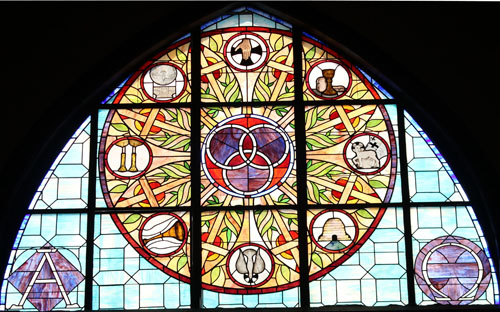 Photo by Nancy A. Ruhling
The stained-glass windows are spectacular.

“God has a way of blessing this church when it hits rock bottom,” Dwayne says. “He has opened some wonderful doors for us.”

In the past, movie and TV shoots — the church has been featured in Smash and Law & Order — along with weddings and funerals have brought in added revenue.

“I don’t go begging for money,” Dwayne says. “I believe that people should give because they are motivated.” 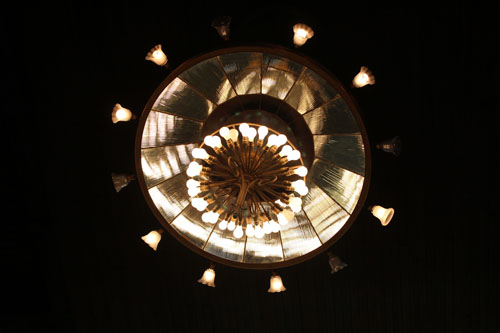 Photo by Nancy A. Ruhling
Vintage chandeliers add to the Lord’s light.

In his personal life, Dwayne has been able to make ends meet because he and his wife of 11 years, The Rev. Anna Jackson of the Queens Reformed Church, live what he describes as a “minimalist lifestyle.” They have no children to provide for — they married when they were close to 40. They own a modest townhouse in Newark, New Jersey. They’ve refinanced several times, and the mortgage will be paid off in only eight more years.

“We consolidate our bills and cut down; we only buy what we need,” he says. “I’m making just enough to live on.”

Dwayne, president of the regional synod of New York and the clergy liaison for Police Service Area 9, likes to take his ministry to the streets. He walks the neighborhood to meet and greet everyone. 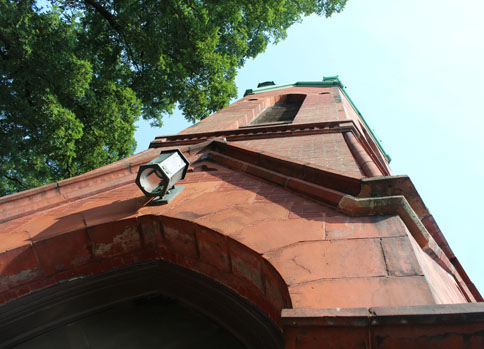 Photo by Nancy A. Ruhling
The steeple has great street presence.

“I’m here so much that hardly anyone knows that I don’t live in Astoria,” he says.

Although Dwayne has been offered jobs with other congregations, he’s turned them down.

“I don’t feel my work in Astoria is done,” he says.

As he sees it, The First Reformed Church of Astoria has made it through 177 years, and it’s up to him to make sure it’s around for 177 more. 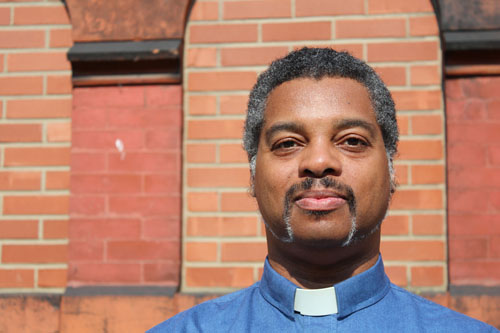 Photo by Nancy A. Ruhling
He’s eager to start the next 177 years.

“It’s my dream to see our doors open seven days a week so we can provide ministries for everyone who walks in,” he says. “I want us to be a real community church just like the one from my childhood.”

Dwayne looks out at the empty pews again and smiles. In his mind, they are filled with God-loving folks. He envisions his people multiplying like so many fishes and loaves of bread.