This is kind of creepy: Evan Makrogiannis is talking about mixing up a batch of blood. The recipe is so simple that even a child can do it, and his sons, 13-year-old Liam and 12-year-old Tristan, are pros at adding red, blue and yellow food coloring to corn syrup.

Now, intestines, that’s another matter. It’s not exactly a trade secret, but Liam and Tristan, cool kids in geeky horn-rimmed glasses, are not sure they want to spill the beans about how they spill their guts.

Evan waves his hand and tells them to go ahead. 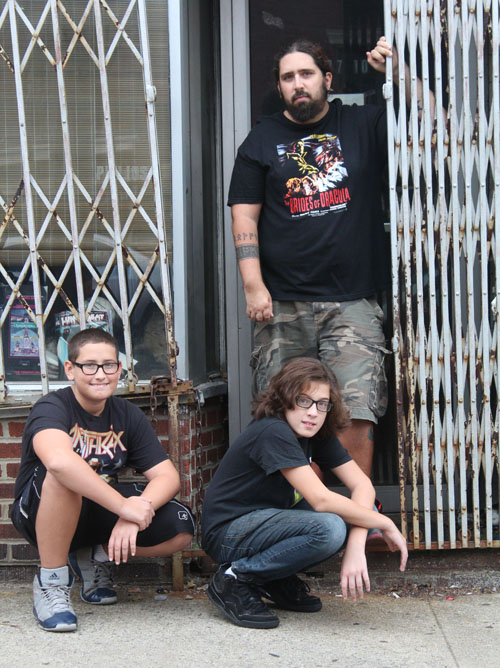 Photo by Nancy A. Ruhling
Evan and his sons, Tristan, left, and Liam outside Philios.

Liam takes the lead: Get some croissants, scoop out their middles and roll them in your hands until they look like plump sausages. Shake up in a bucket of homemade blood to give them their glowing color.

“It makes you cringe,” Liam says. “That’s a good thing. It’s the nastiest.” 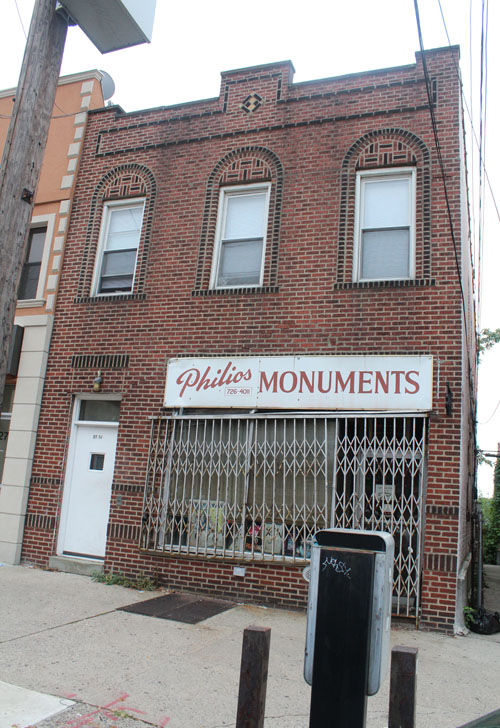 Photo by Nancy A. Ruhling
Evan and sons have raised Philios from the dead; it’s their film office.

Evan, with the help of Liam and Tristan, makes horror/exploitation films, and the blood and guts are the meat and potatoes of his business. They have to look real so they can strike real terror into the hearts of all who see them on the screen.

It’s Halloween week, and if that’s not enough to frighten you, Evan has organized a convention that’s guaranteed to wake the dead. The New York Horror and Exploitation Film Fest, which runs Saturday and Sunday at Hellgate Social, is the first in New York to focus on independents, or as Evan calls them, “the little guys like me who get overlooked.” 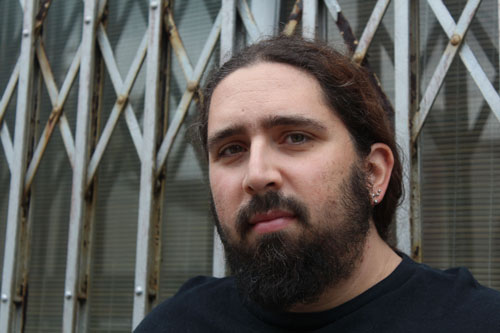 Photo by Nancy A. Ruhling
Evan’s made two horror/exploitation films so far.

The father-sons team makes its makeshift office at Philios Monuments, the deceased cemetery marker company on 23rd Avenue that’s always guarded by rusting gates. It’s not haunted. It just looks as though it is. A one-eyed deer peeks out through the silver bars of the dust-rimmed, plate-glass picture window.

Philios was founded by Evan’s grandfather, a Greek immigrant, in the 1970s as his retirement business. The floor is filled with cardboard boxes. 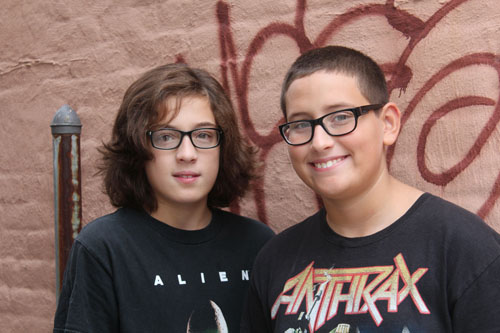 There’s a blue bicycle nudging its front tire into the cobweb-covered desk, where a bloody, severed foot cools its naked heel on a book. A collage of photos and artwork papers the cheap-paneled walls, and model planes of various vintages wing it.

Evan, who grew up in Astoria’s Queensview co-ops, learned to love horror films long before he reached Liam’s and Tristan’s ages. His uncle, an NYPD composite artist who collected horror-film art, lived down the hall, and his grandfather, Philios founder and captain of the 114th Precinct, lived upstairs and took great delight in playing Frankenstein with him.

The trailer for The Turnpike Killer.

“He put me on the table and tricked me into lying there to keep me quiet,” Evan says. “When it was time for dinner, he turned on Wagner and said, ‘Rise, it’s alive!’ as he flicked on the lights.”

Evan, a Paul Bunyan with a chestnut ponytail, silver ear studs, tattoos and the plump, pouty lips of a putto, put the idea of making horror films on the coroner’s cold slab and earned a degree in British literature from Hunter College. 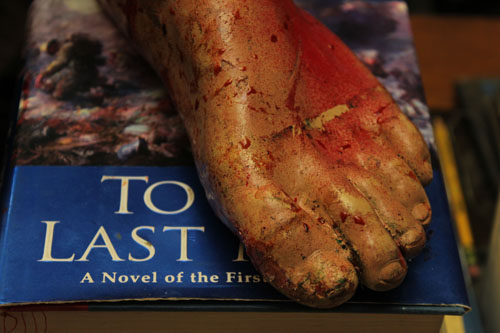 Photo by Nancy A. Ruhling
Is anyone missing a bloody foot?

“My goal was to become a high school teacher,” he says. “But after student teaching, I knew it wasn’t for me.”

By that time, he had obligations that demanded a steady paycheck: He was married, and Liam was a baby. He took a job at the New York Blood Center in Manhattan, where he worked until getting a pink slip in 2005. That, he says, was really frightening.

“I was always writing stories and treatments and my best friend, who was in a similar situation, said that we could talk about it or we could do, so we did it.”

The trailer for The Super.

The Turnpike Killer, which was shot in 2009 and released this year, is billed as a thriller where “all roads lead to death.” It was followed by the The Super, where the viewer is warned: “Don’t bother locking your doors. He has the keys.”

The low-budget films — The Turnpike Killer was made for $6,000 and The Super for $20,000 — were shot in spurts, usually weekends when the unpaid actors didn’t have to show up for their day jobs. Evan’s “very supportive wife,” who works in the corporate world, has been footing the bills for the family while Evan shoots for the stars.

His movies, available in VHS format for play on the VCR, pay tribute to the cheesy horror films of the 1970s and 1980s. They are even packaged in retro-style boxes that feature bone-chilling, graphic artwork. 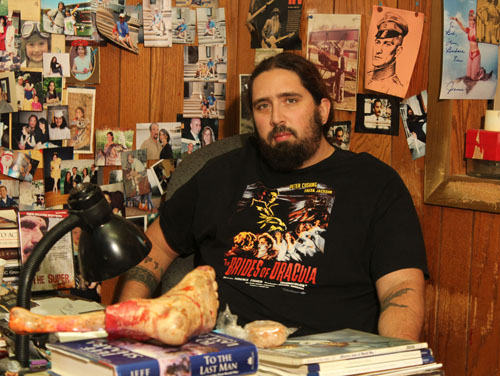 Photo by Nancy A. Ruhling
Evan hopes the film fest is a scary success.

Werewolves, zombies, mummies, ghosts, screaming skulls and things that go bump in the night still give him goose bumps, but what really scares Evan are life’s suspenseful moments.

“The most terrifying thing is the phone call or the doorbell ringing at 3 a.m.,” he says. “It’s got to be trouble.”

With The Turnpike Killer and The Super in the can, Evan has begun work on Survive, Liam’s first feature-length film. It has zombies, a lethal virus and a bunch of people in a house who have to stick together like Krazy glue to make it out alive.

“I’ve been taking acting lessons ever since I was 8,” says Liam, a student at Talent Unlimited High School. “I’ve been in a lot of movies and plays, and I have a part in Survive. My dad’s films inspired me to get a feel for everything about movies, which is why I wrote Survive.“ 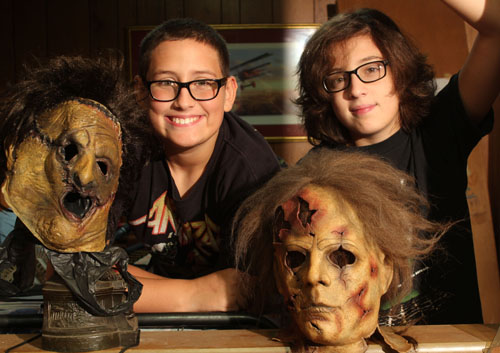 Photo by Nancy A. Ruhling
Tristan, left, and Liam find that fright’s a lot of fun.

Tristan, who attends Louis Armstrong Middle School, hasn’t made a film yet, but he’s writing a script for one titled Bad Review. In it, a student takes his college money to make a film, and when it’s panned by the critics, he kills himself. One by one, the writers of the bad reviews are knocked off. The killer? Well, it’s the last person you would expect.

Although Tristan likes to work on his dad’s films — he’s a “best boy,” doing everything from holding boom mikes to adjusting lights — he wants to be a baseball player or an athlete.

The three are thrilled to be making thrillers. They’ll continue to pen scary scripts, unless they come to an untimely end under suspect circumstances. There could be an axe murderer out there or a stalker with a chainsaw lying in wait.

“I’d like to think that I can keep on doing this,” the 39-year-old Evan says. “I have a couple of things down the road. I’m close. I’m hoping I’ll catch a break. But I may hit a wall, and then I’ll have to ask myself, ‘Where do I go from here?'”

A filmless future. Horrors! That’s a plot he wants no part of.