A dozen African masks. A baby grand. And a bouquet.

If we are the sum of our possessions, these tell us most of what we need to know about Milton “Mickey” Wilner.

Let’s start with the flowers. Mickey bought the $40 bunch of carnations, daylilies and daisies for his wife, Dorothy, on the occasion of their anniversary. (Dorothy’s fresh out of the hospital, and there may be other gifts coming, but that’s a surprise.)

He remarks that they have been married 84 years. Oops, that’s a slip of the tongue. Or, being that Mickey’s a psychologist, a Freudian slip. At any rate, he means 64, which is still a colossal matrimonial milestone. 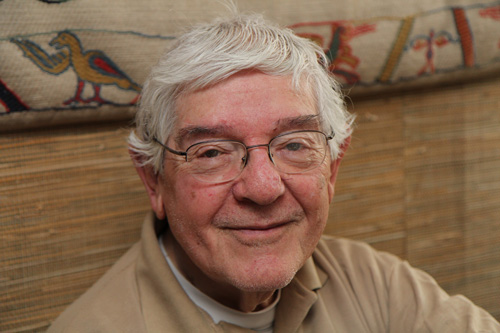 Photo by Nancy A. Ruhling
Mickey grew up in East New York.

Milton, a short sugarplum with sharp, smiling eyes, started being called Mickey when he was a little boy. His ears, you see, were big and his head was small so he looked like Disney’s famous mouse.

Ah, those ears: Truth be told, even though he’s about to hit 89, he still hasn’t grown into them.

Anyway, Mickey became his nickname, then his name when he, the ninth of 10 children, was growing up in Brooklyn’s East New York, a Jewish enclave where his family fit right in. His parents, who came from White Russia, were poorer than poor. 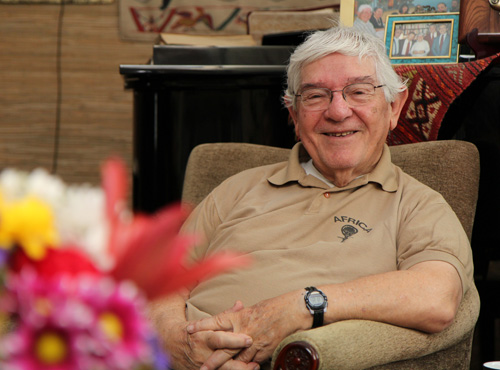 Photo by Nancy A. Ruhling
He just celebrated 64 years of marriage.

“They were able to buy a house — they had a first and a second mortgage — and my childhood was punctuated by my mother telling the lender that we didn’t have the money and pleading for more time to pay,” he says.

With all those brothers and sisters, Mickey’s family life was what could politely be called boisterous.

“The atmosphere was hysterical,” he says. “People were yelling all the time, so to escape, I would go to my room, which was the outdoors. I considered it a medieval church, a sanctuary.”

Photo by Nancy A. Ruhling
Mickey got interested in Africa in his Peace Corps years.

Mickey did all the things kids in those old days did. He shot the breeze with his friends, and he played games like handball and tag in the streets.

He waited until first grade to start his formal education; his mommy wanted to keep him close and decided he didn’t need to go to kindergarten. Because he had never been in school, he was put in with the dull kids until a test revealed that his ears weren’t his only big feature.

By the time he made it into Brooklyn Technical High School, World War II was in full swing, and when he was 18, he begged his mother to let him enlist in the army.

“She resisted because she already had four sons in the war,” he says. “When I got in, because of my science background, I got to study a new technology that came to be called radar.” 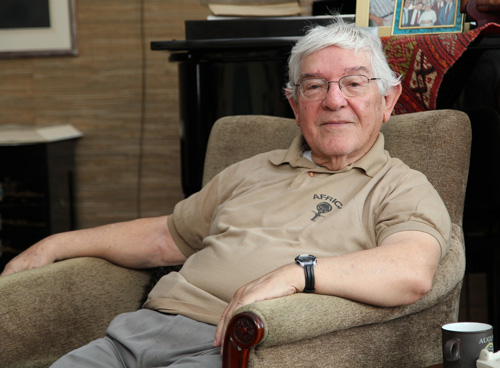 Photo by Nancy A. Ruhling
Group therapy was his forte.

Mickey wanted to fight Hitler, but he was sent to the Asian theatre instead. He remembers being transported in a convoy from Hawaii to the Philippines for the amphibioius invasion of Leyte. For 43 nights, he slept in a cot on the deck of a docking landing ship.

“It was a beautiful experience crossing the Pacific,” he says, adding that the battle bewildered and terrified him and left him with a shrapnel scar on his nose.

“I never shot anyone,” he says. “There was a time when I was guarding a hospital that I got a Japanese man in my sites. I saw him running side to side, but I did not pull the trigger, but other people did and he was dead. I wondered why I didn’t fire, but I’m glad I didn’t.”

The war changed Mickey’s life and his ideas about a lot of things. Although he was interested in physical science and started taking night classes in that subject, he soon realized that psychology, what he calls “the science of the engineering of people” was far more entrancing. 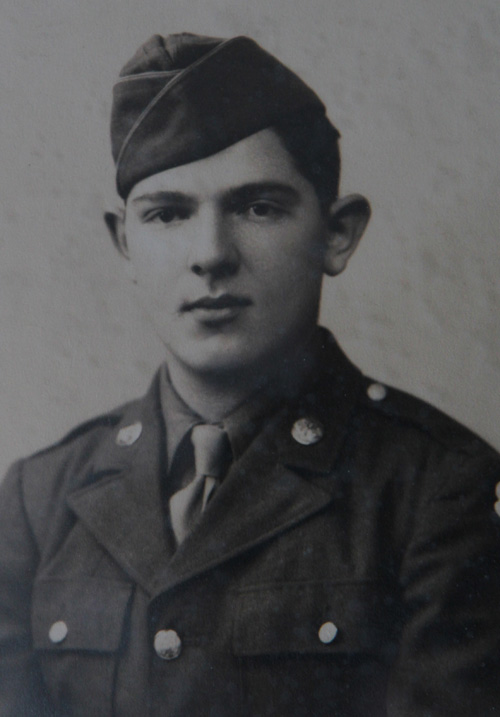 Photo by Nancy A. Ruhling
Mickey enlisted in the army at 18.

Actually, it was Dorothy, the anniversary bouquet’s recipient and the mother of their two daughters, who persuaded him to switch. He likes to call her Dotty. Yes, that’s the correct spelling, but “sometimes I call her Dottie, spelled D O T T I E,” he says and laughs.

Using his GI Bill benefits, Mickey went to New York University long enough to earn a bachelor’s degree in psychology and a doctorate in social and clinical psychology.

“It was on the streets of my boyhood that I got an innate sense of group dynamics,” he says. “This made me good at group therapy.”

Through the decades, Mickey held full-time jobs at various organizations and topped off that work with a private practice and a five-year stint of service to the Peace Corps. 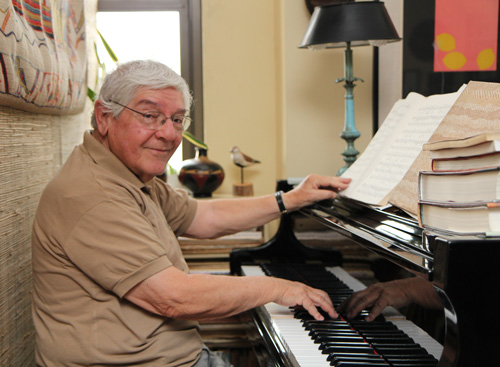 Photo by Nancy A. Ruhling
He plays at playing the baby grand.

“I always like to have at least three activities going at one time,” he says. “I had a habit of taking a full-time job for a year then quitting so I could take a different full-time job in the summer.”

For the Peace Corps, he evaluated and trained prospective volunteers.

“It was a wonderful experience,” he says. “They were the cream of American youth.”

It was on his trips to various parts of Africa to visit them that he picked up the masks.

He continued working through his early 80s — neither he nor Dorothy is sure which year he finally fully retired. 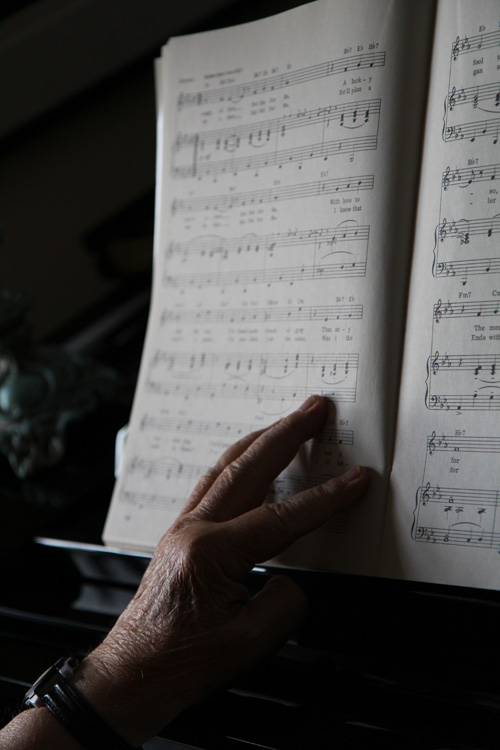 Photo by Nancy A. Ruhling
He plunks out part of a show tune.

What about the piano? Oh, Mickey got that when he was in his 60s. He had a player piano, the kind with the paper spools, when he was a kid, and he always liked pumping the pedals and plunking and pecking out tunes with his fingers and fists.

“I tried taking lessons with 10 fingers when I was an adult,” he says. “But I was a dismal failure. Every month or two, I play a melody line from a Broadway show tune.”

Mickey’s fingers may not get far, but he and Dorothy are always going to faraway places. 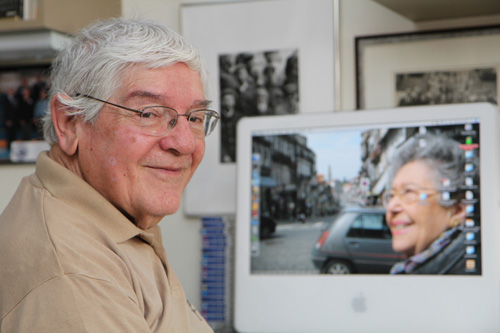 Photo by Nancy A. Ruhling
Dorothy is the apple of Mickey’s Apple.

When they were young, they drove. Now, they take cruises; Mickey picks a river — the Volga, the Elbe, the Rhine, the Danube — and they explore it.

Come August, they’ll celebrate Mickey’s 89th birthday playing tourist on the French and Italian Rivieras and on the islands of Elba and Corsica. Dorothy has been mum on the subject of parties, but Mickey suspects there’ll be “some hoopla” on the high seas. When he comes back, he’ll tell you all about it.