She had planned to wear her hot-pink ball gown. And her silver stilettos. But she couldn’t find a strapless bra. That’s why Crystal Smith is in a long brown number with a swishy skirt that the wind is trying to play Marilyn Monroe with.

It’s not every day that Crystal — mom, grandmother, wife and devoted child of God — gets to tell her story, so she’s feeling (and dressing) like a red-carpet celebrity. She may not be famous — yet — but OMG, she is a Force To Be Reckoned With.

Gold-hearted, bold and bodacious, Crystal is a warrior woman who wears her punked Medusa curls like a victory crown. So powerful is her will to do good that it puts the sun into permanent shade. Some people fill up rooms; Crystal fills up stadiums. 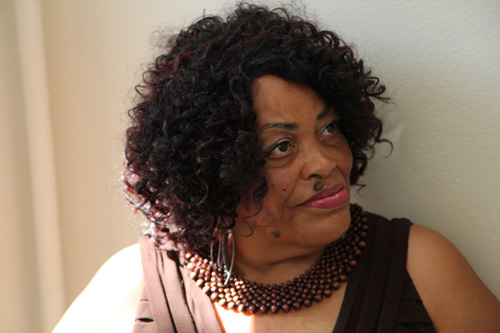 “I’m 61. Go ahead and put that in the story,” she dares. “People who see it are going to look at my picture and go ‘wow!’ because I look so much younger.”

She seizes the mirror for confirmation and makes it admire her. Uh-huh, this cougar’s lookin’ good.

Given the rocky start Crystal got, it’s nothing short of a miracle that she’s still on this planet, let alone helping others make the most of their lives.

One of 10 children, she was born in High Point, North Carolina. Her parents moved here when she was in diapers, squeezing the family into a four-bedroom apartment in the Astoria Houses projects. 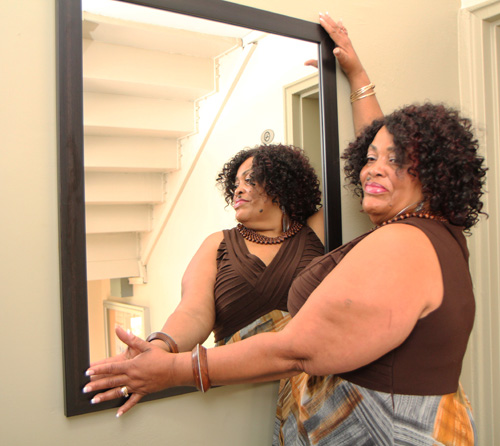 Photo by Nancy A. Ruhling
The mirror’s her best friend.

“The ghetto was nice in those days,” Crystal says. “We kept our doors unlocked and went to visit the neighbors all the time.”

Well, not all of it was nice. Crystal’s dad was always leaving his pants at another woman’s house, and her overworked mother saddled her with the chores. When she was 5, Crystal took over the laundry, carrying a pint-size purse with small change to throw into the maws of the machines, and the cooking (to this day, nobody can beat her potato salad).

“I started getting a little wild,” she says. “I didn’t want to follow the rules, so my mom put me out of the house when I was 14.”

The eviction didn’t much bother Crystal. She took her long, blond extensions and Virginia Slims and pranced right to the corner bar for a job — “in those days nobody checked your ID,” she says. She also took up with a character named Artie. 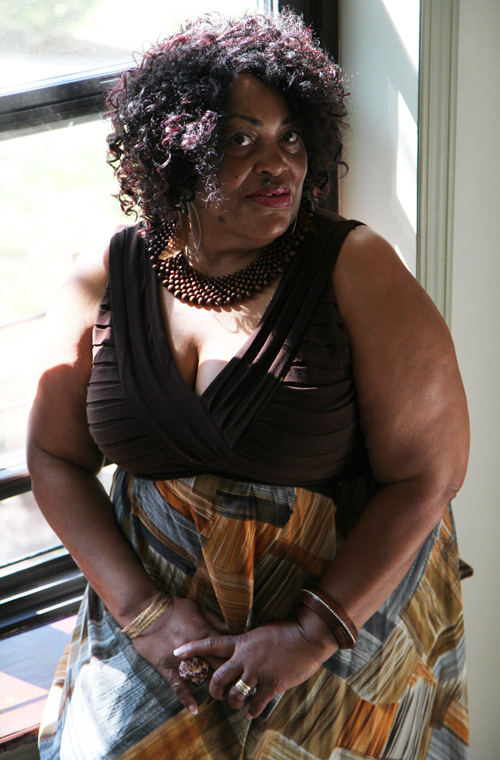 Photo by Nancy A. Ruhling
Don’t let the sweet little-girl pose fool you: She’s a powerhouse.

She starts dabbing her eyes. “I’m one tough cookie,” she says, “but I do get emotional when I talk about these things.”

Artie was twice Crystal’s age, and the two of them lived above the bar, sleeping on the floor. Artie was a bookie, and Crystal started running numbers for him. When they weren’t working, they drank. A lot. So much so that Crystal became an A-plus student in AA. 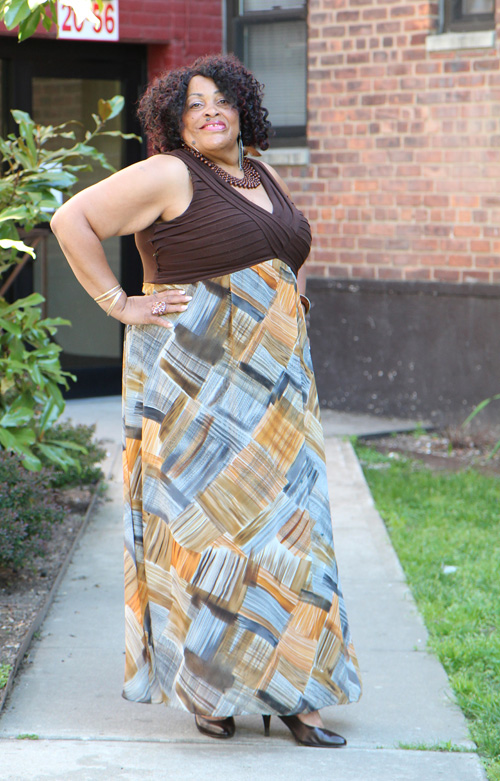 “We didn’t have a dollar or a window to throw it out of,” she says.

But they did have one stroke of luck: Artie played No. 528 for $10 straight and won $10,000, enough to pay the rent on a two-bedroom apartment for five years.

Crystal went back to school to get her GED and through the years, held several jobs, the last of them as a paralegal for a Manhattan law firm.

Crystal and Artie never formalized their relationship with a piece of paper, but they stayed together — in the same apartment — until 1997 when Artie died. 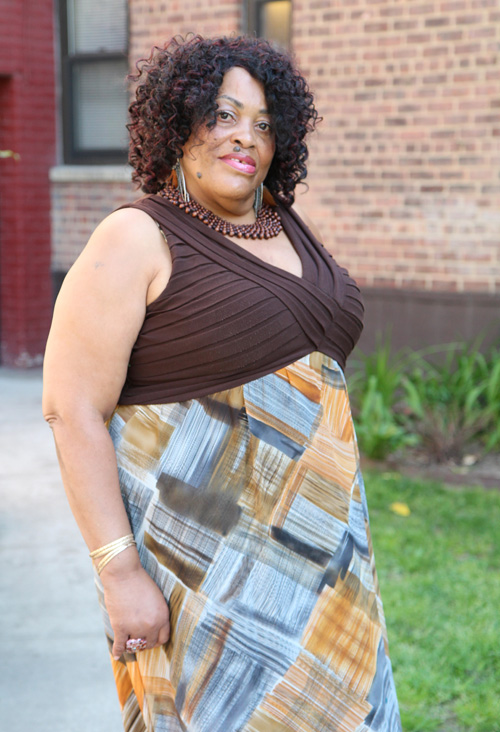 Photo by Nancy A. Ruhling
She goes to church and AA meetings.

“He was on dialysis for 19 years,” Crystal says. “Three times a week, I had to clean out the hole in his stomach.”

Along life’s journey, Crystal gained a daughter and at one time or another, took 11 nieces and nephews under her ample wing. When her granddaughter, who is 10, came into the picture, Crystal made room for her in her house and in her heart. The living room is filled with the little girl’s dolls and track medals, and there’s a hamster in a cage by the TV.

Around the time her granddaughter was born, Crystal got herself a husband. It happened when she was sitting on a park bench on her lunch break. She was eating a salad when he, hero in hand, asked to sit next to her. 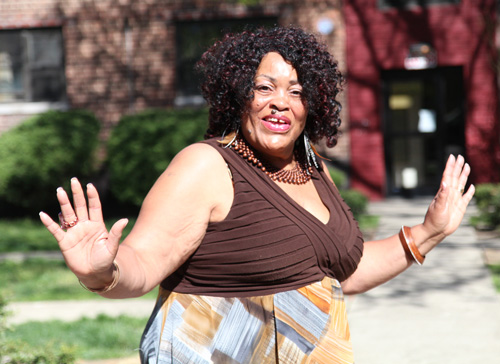 “I can still fit in the dress I was wearing that day,” she says proudly, “because it’s polyester and it stretches.”

Crystal was flattered by his attention: Not only was he a “cutie-pie,” but he also was much younger.

Three years later, Crystal walked down the aisle as her groom sang her a song of love. She made her own silk-flower bouquet (it has shining Swarovskis so nobody will ever forget it’s Crystal’s). She keeps it, along with a bride doll wearing a dress she made from a swatch of her gown, in a glass case in the living room. 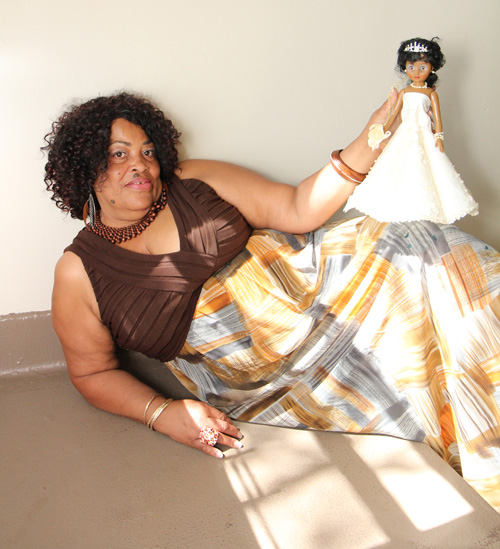 Photo by Nancy A. Ruhling
Crystal and her bride doll: ‘Diva’s gotta have a replica.’

Crystal has a lot more to tell, but this is not the place. She’s saving the real juicy stuff for her memoirs.

“I have no doubt the book will be published and be a success,” she says.

These days, things are pretty calm for Crystal. She devotes herself to her granddaughter and the neighborhood kids. When the weather’s good, she spreads a blanket outside her window and teaches them arts and crafts. She does the same thing at the Long Island City branch of the Queens Library. And she mentors half a dozen older kids. 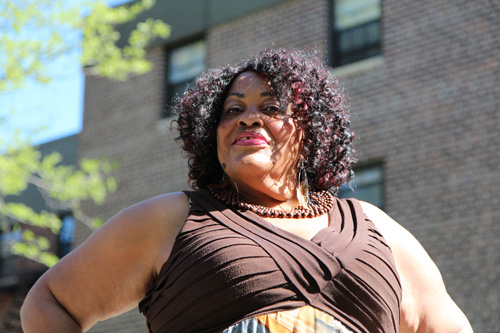 Photo by Nancy A. Ruhling
Ready for every battle that comes her way.

“I’m the mother to multiples,” she says. “I’m like the mayor of the community.”

Crystal sees her life as a blessing she’d like to spread to others.