Fantasy. That’s what it promises on the big blue sign outside, and that’s what’s written on the floor at the front door.

In case you forget, “Fantasy” is embroidered in glittering gold on the royal-blue smocks of the salesgirls who snap to attention like Stepford Wives when customers come in.

Fantasy Curtain & Linen Shops, a mom-and-pop Bed, Bath and Beyond that is known for its custom and ready-made window treatments, has been a staple of Steinway Street since it was opened by Harry Last and his son, Mel, in 1951. Harry and Mel are gone, but Mel’s youngest son, Rob Last, is still running the home show. 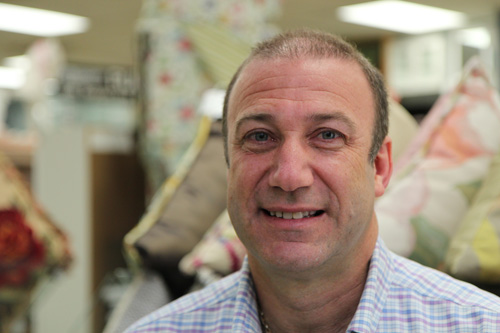 Photo by Nancy A. Ruhling
Under Rob, the Fantasy continues.

“It’s called Fantasy because it was always my dad’s and my grandfather’s dream, or fantasy, to open a store together,” says Rob. “And it’s about helping homeowners create their own decorating fantasy.”

Rob, a tall man short on hair, officially started working for Fantasy when he was 8, but he’s pretty sure that his mother first brought him to the shop when he was a baby.

Photo by Nancy A. Ruhling
Fantasy is a big presence on Steinway Street.

“My dad worked long hours, and we lived in Valley Stream, Long Island,” he says. “This would have been the only way he saw the family.”

In the beginning, Rob did rudimentary tasks, working in the stockroom and taking inventory. He tried college for a short time, but he found he was always fantasizing about a future with Fantasy. When there was an opportunity to expand the size of the shop to include giftware, he cut himself loose from classes and made Fantasy his one and only higher education. 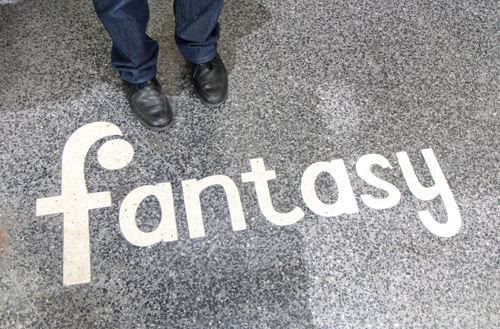 Photo by Nancy A. Ruhling
Fantasy’s fantasy begins at the front door.

If owners could get grades for making businesses successful, Rob would get straight As for moving Fantasy into the 21st century while keeping its antique ambience.

“This is much more than a place to buy a crystal goblet or a custom curtain,” he says. “I’ve begun calling it Fantasy Interiors to emphasize our custom design work.” 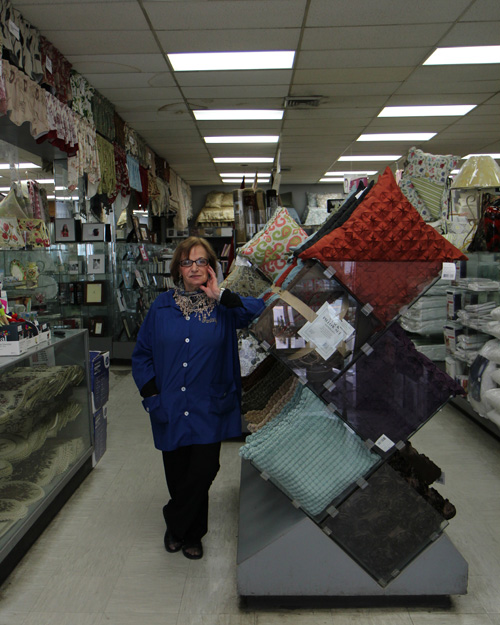 Photo by Nancy A. Ruhling
The smocked salesgirls at Fantasy sell everything from pillows to clocks.

Indeed, even if you’ve never been to Fantasy, you are likely to have seen its work on the big and small screen. Blue Bloods, The Good Wife, Boardwalk Empire, The Americans, Orange Is the New Black and Girls are some of the recent TV series that have called upon Rob to turn their fantasy decors into fictional reality. As for the movies, remember the fantastic floating bed in Arthur 2: On the Rocks? Well, it’s Fantasy-made.

“Every day is a challenge because you don’t know who is going to call or what new project you’re going to be doing,” Rob says. 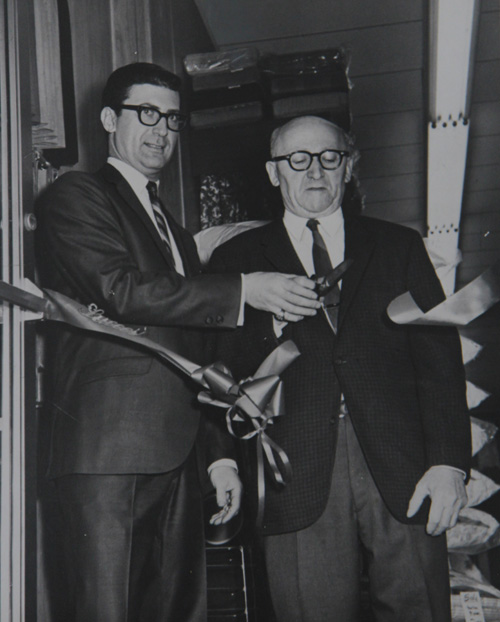 Photo by Nancy A. Ruhling
Mel, left, and Harry at Fantasy’s flourished opening.

Fantasy, which started out at another Steinway Street address and moved to its present location in 1956, is a behemoth: Its 6,300-square-foot, single-story showroom, which displays everything from tissue boxes to towels, dominates the block and all but dwarfs its neighbors. 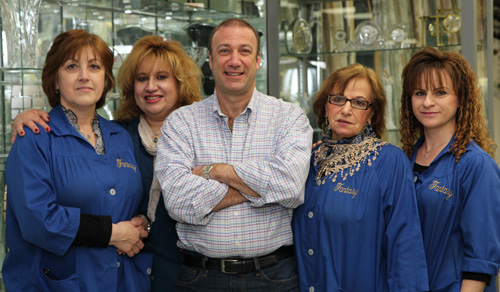 Photo by Nancy A. Ruhling
Rob with the sales team: Draga, left, Mitra, Carol and Anna.

Fantasy draws customers from all over the metro area; some even come from as far away as the past.

“People remember us from the old days,” Rob says. “We always treat people like family. We give them quality and fair prices and excellent service.” 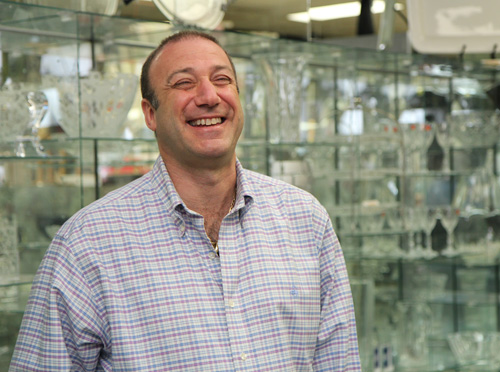 Fantasy’s a seven-day-a-week shop, and Rob is in the store five to six of them. More often than not, he makes stops to pick up materials or do measurements on his way from his Hewlett home, sometimes starting his work day at 8.

“After we close, I still make house calls,” he says. “I like to make everything convenient for the customer. My day never ends.” 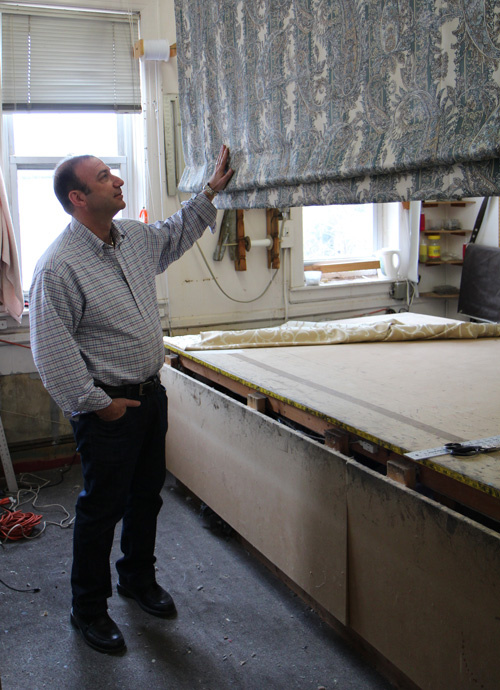 Photo by Nancy A. Ruhling
Rob inspects a shade in the workroom.

This is not a complaint, mind you. Yes, sometimes he’s really tired, but he wouldn’t have it any other way.

Rob’s dad didn’t let go of Fantasy until pretty near his death, and Rob, who’s 51, intends to follow in his footsteps. 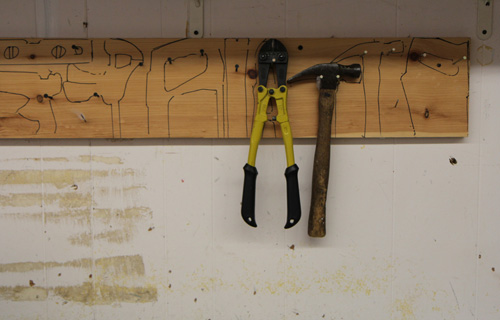 He’d like the store to last at least another half century. His ultimate fantasy for Fantasy is that he won’t be the last Last. 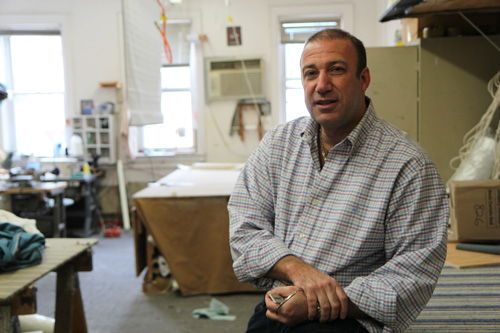 Photo by Nancy A. Ruhling
Rob wants the shop to stay in the family.

“My daughter, who is getting ready to go to college, is going to work here this summer to see whether she likes it,” he says. “I’d like someone in the family to bring it to the next level, to bring it more notoriety and to start selling items on the Internet.”

And if that doesn’t happen, Rob will do what he always does: He’ll figure something else out.