You can set your clock by Dana D’Ascoli. Every morning in every kind of weather, she’s in Astoria Park logging lightning laps from 5 to 6.

She does her swift strides solo, which makes the whole act even more impressive because it’s really hard to keep getting up at 4:30 a.m. without someone nudging you to do it.

“People ask me why I don’t run,” says Dana, who speaks at warp speed. “It’s because I’m a slow runner. But I’m a fast walker.” 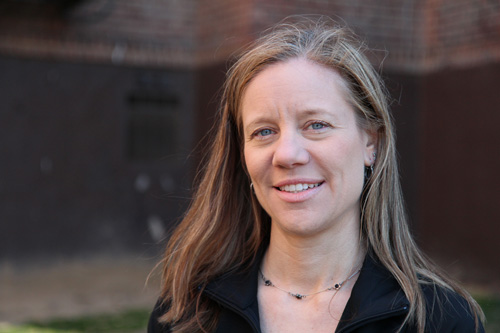 Dana walks in the park, swiftly (Photo by Nancy A. Ruhling)

And it’s not just around the park. Dana’s running role in life has been careering away from things she doesn’t love to do.

“I’ve always had wanderlust,” she says. “I see a permanent job as a death sentence.”

Fortunately, for most of her 42 years, Dana’s managed to break out of the steady-paycheck jailhouse simply by passionately pursuing new and interesting things.

By the way, 42 is not a typo. People always think Dana is about 25, and when you look at her, it’s literally easy to see why. But she swears that 42 is her real age. 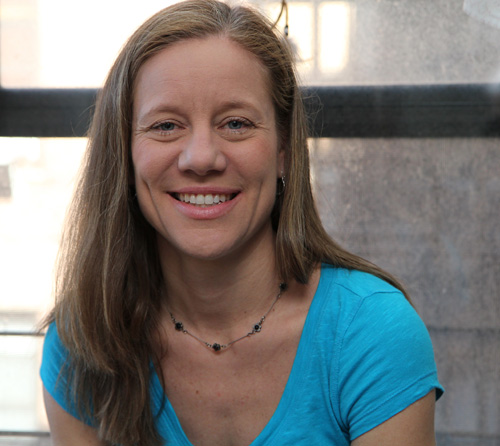 She has an office job — for now (Photo by Nancy A. Ruhling)

This is all the more remarkable considering that Dana generally wears little or no makeup, and she’s only recently been coloring her hair to hide some of the grey that has been creeping into her long, caramel locks. She only cuts her hair once or twice a year, and when she’s in the park, it’s in a ponytail that bobs perkily behind her like a cheerleader’s pompon.

Dana, who has a twin sister, grew up in New Providence, New Jersey in a middle-class household of six children. Her future non-career path was set shortly after she graduated from Rutgers University. That’s when she went to Colorado to work for a ranch.

“I wanted to learn to ride horses,” she says, “and lessons were too expensive. I didn’t know anything about horses, so they gave me a job cleaning cabins. I stayed for four months.”

Her first full-time job was in the marketing department of a radio network. She marched away from it to go to Costa Rica for a couple of months as part of WorldTeach. 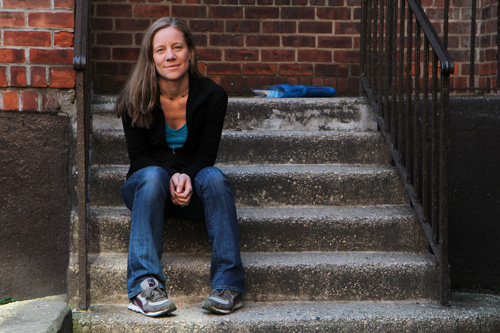 Climbing the corporate ladder is not for her (Photo by Nancy A. Ruhling)

“I wanted to learn Spanish,” she explains.

Next, her feet took her to New York University, where she worked in a tax program while taking acting, writing and Spanish classes.

But what she really wanted to do — at least at that moment — was teach the deaf. That’s why she kept that day job: It allowed her to pay for a New Jersey college program in sign language interpretation.

“It’s such a beautiful language,” she says. “But I realized, almost too late, that I didn’t like teaching, so I quit the three-year program after only two years.”

Acting was her next first choice, and she went all the way to London to audition for a one-year program. She passed with flying red, white and blue colors, and when she came back to New York City, she started walking the auditions circuit. She supported herself by working two jobs. 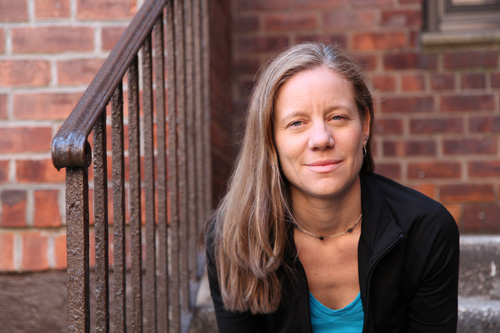 Can’t you picture her on TV? (Photo by Nancy A. Ruhling)

That didn’t exactly work out, so she went back to school, earning a master’s in deaf education from Hunter College.

“I temped during the week and went to school at night,” she says. “On weekends, I worked in a New Jersey hotel.”

Before she knew it and much to her dismay, one of her temp jobs turned into a permanent position. Which was a very good thing because when she got her degree, all signs were, once again, pointing her away from the confines of the classroom.

“When I started student teaching at a deaf school, I had to sign and speak simultaneously,” she says. “I didn’t feel I knew enough sign language to do that.”

So it is that Dana has kept her day job, which has allowed her the luxury of living in a studio apartment. This is a big deal because it means that for the first time in forever, she doesn’t have to take in a roommate to help pay the rent. 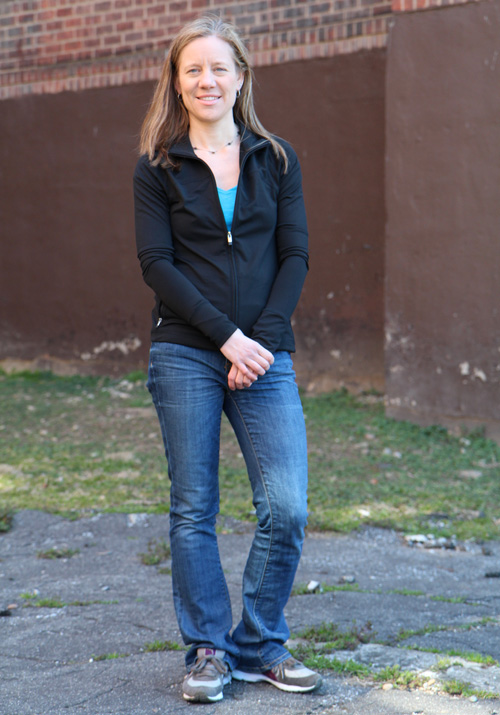 Dana’s feet are made for speed walking (Photo by Nancy A. Ruhling)

But things are getting a little stale, and Dana’s feet are itching to take her somewhere else.

Dana doesn’t mind walking in place as long as it ultimately gets her where she wants to go.

Walking, which for her is second only to breathing, isn’t her only form of exercise. Recently, she’s been pedaling her ancient blue bike to her Midtown job. 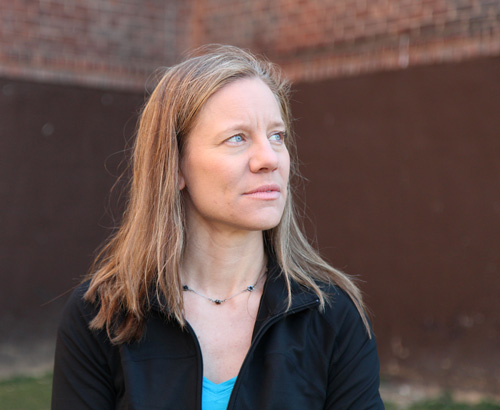 The future? Dana likes the fact that it’s not set in stone (Photo by Nancy A. Ruhling)

Come summer, she’ll be walking to Astoria Park to swim, and she’s thinking of footing it to the office, too, just for fun.

The more things change, the faster Dana walks. There’s only one thing she knows for sure: The play she’s in won’t be over until she makes the final curtain fall.

“My end goal is ever evolving,” she says, smiling.