The small studio is hidden, behind a hollow-core wooden door, in a corner of the basement apartment. 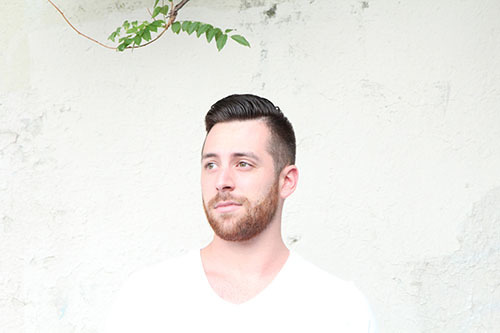 Photo by Nancy A. Ruhling
Portrait of an emerging artist.

Its scant space is squandered by a plastic shower curtain that separates it from the mechanical machinery that runs the four-family house.

It is here, in the shallow night light of a single ceiling bulb, that Angelo Giokas retreats to create the pseudo-urban mixed-media hodge-podge collages that define his artistic life.

“My working process is akin to a dance or a song,” he says. “I respond to texture, color and space. I put a lot of things on the canvas, and I take a lot of things off until I get it right.”

Angelo, a 26-year-old shod in laceless Pollock-paint-spotted sneakers that once were white, hasn’t been an artist for a significant amount of time. 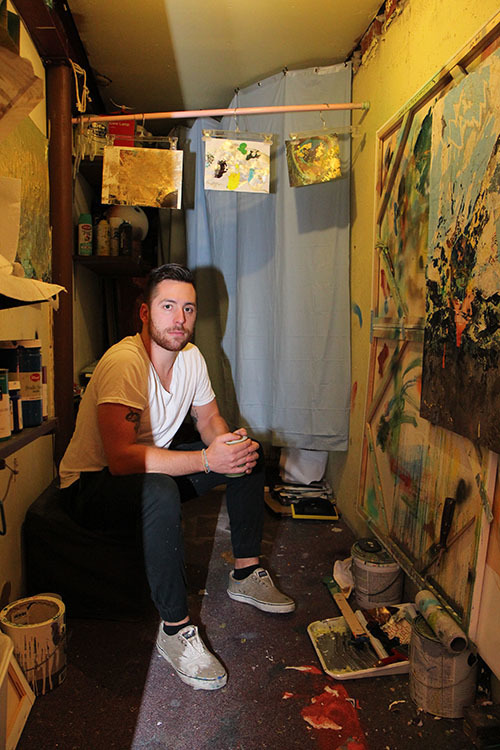 Photo by Nancy A. Ruhling
Angelo in his basement art studio.

This has nothing to do with his age or lack thereof.

It’s just that he didn’t find his muse – or his paintbrushes – until after he left college.

Angelo, who was born in Astoria and raised in Little Neck, had always been drawn to music and poetry.

He spent his childhood filling in coloring books and building things, great things, with Lego blocks. 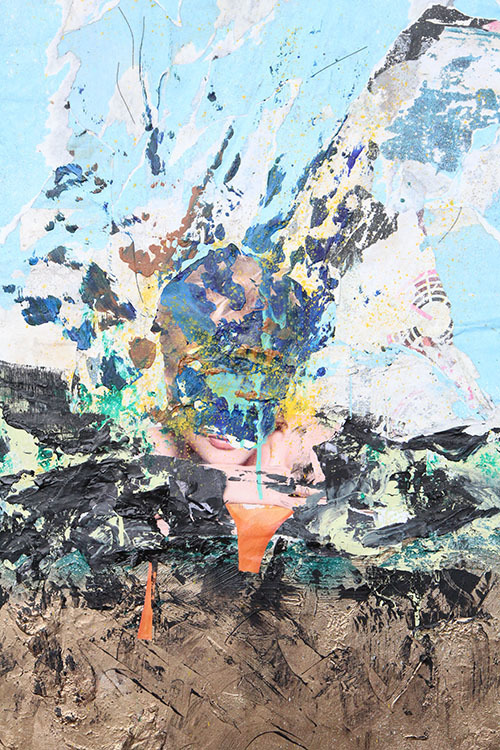 Photo by Nancy A. Ruhling
One of Angelo’s works in progress.

After he earned a degree in creative arts from Siena College, his wanderlust landed him at Goldsmiths, University of London, whose appeal was more about location than education.

“I thought it would be romantic to study abroad,” he says. “I didn’t have any idea what I wanted to do with my life.”

It was while taking courses in playwriting, filmmaking, performance art and everything but painting that Angelo first put brush to canvas. 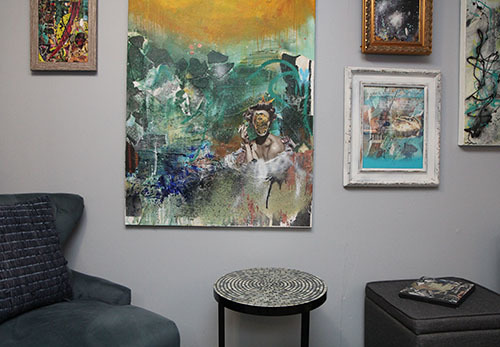 Photo by Nancy A. Ruhling
A mini-gallery of Angelo’s works.

“I liked it so much that I didn’t want to quit,” he says. “When I came home, I brought seven or eight finished canvases on the plane with me.”

He set up a studio in a wooden shed in his parents’ back yard and took a job as a data analyst for an advertising technology firm in Midtown Manhattan.

He painted when he felt like it, which was pretty much whenever he had free time.

Two years ago, he moved into his grandparents’ basement apartment in Astoria. 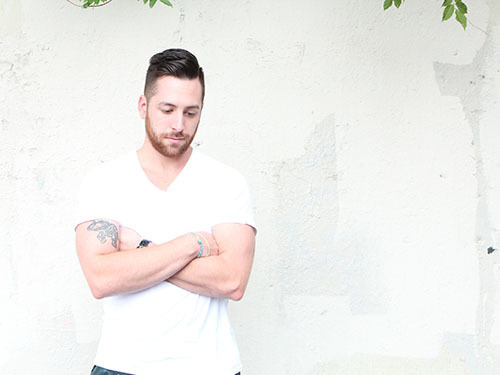 Photo by Nancy A. Ruhling
Angelo has never taken a painting class.

“A couple of times a week I drive to Little Neck after work,” he says. “That’s where I do the bigger work. I’m more at home and freer in the bigger space because I don’t have to be as careful about cleaning up the paint, but the space in the apartment allows me to be more meditative and reflective.”

Angelo thrives on the day/night flow of commerce and art; it’s the difference between the two that sparks his creativity.

“I like the hustle and grind of my current state,” he says. “That’s what produces the magic of it.”

He points to a large canvas on his living room wall titled The Sun Will Rise and Lead Me Home, a tactile work that features fist-size pieces of green paint chips. 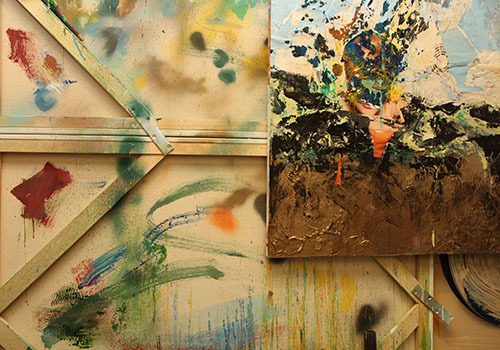 Photo by Nancy A. Ruhling
Angelo’s process is spontaneous.

“I got those at the Astoria Boulevard subway stop,” he says. “The paint was peeling, so I scraped it off. I have a whole bag of chips.”

His Midtown office is another source of cast-off found objects.

“We work with a lot of print pieces and discard them when we are finished with them,” he says. “I’ve become quite a Dumpster diver.” 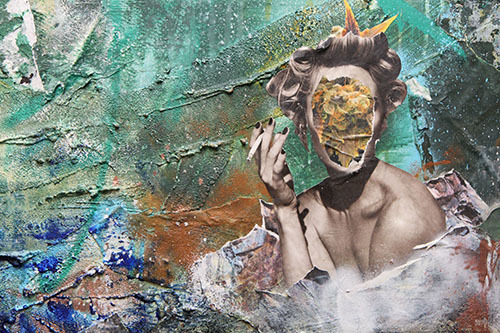 Photo by Nancy A. Ruhling
A detail of The Sun Will Rise and Lead Me Home.

“I don’t do sketches or drawings or have an end goal,” he says. “But I do have a vision. I work until I no longer have an affinity for the work. I just know when it’s time to stop. The end product doesn’t matter. It’s the story of the making, it’s my story that I want to share. I’d like to think that people dig my story and my art.”

Although he’s passionate about painting, Angelo isn’t so sure he wants to take it up full time – at least for now.

“Even if I quit my job tomorrow,” he says, “I’d still need to find balance.” 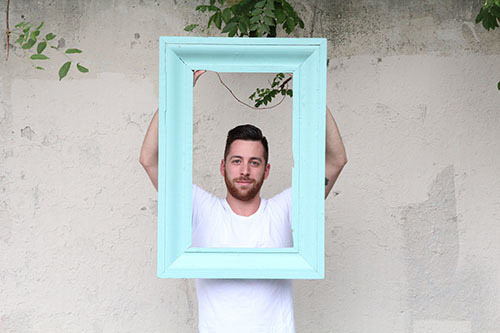 Photo by Nancy A. Ruhling
He’s waiting for life to fill things in.

Angelo is well aware that his art is a work in progress, and that’s what excites him.

“I’d like to believe that my best work has not been conceived yet,” he says.

He switches off the studio light. In the blackness, he cannot see his future.