Michael Serao isn’t wearing a suit. This would not be worth noting were it not for the fact that Michael is a banker, whose ranks are most suited to suits.

His uniform — striped tie and shirt, black slacks and baby-blue sweater that matches his eyes — suits him and the kind of hands-on community banking he likes to do.

Michael, who has a Mercedes, a Rolex and a heart of gold, is the regional manager/vice president of Quontic Bank, which recently opened its Astoria branch.

Quontic isn’t quite The Bailey Building and Loan Association, but it’s the kind of bank that It’s a Wonderful Life‘s George Bailey would have felt right at home in. 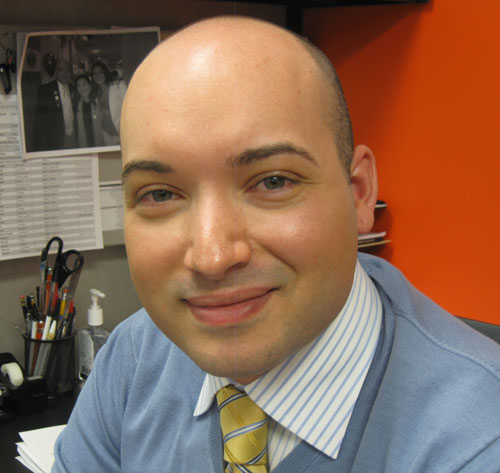 Photo by Nancy A. Ruhling
Michael is the regional manager/vice president of Quontic Bank.

And it’s the kind of bank that doesn’t exist any more. Michael knows his 1,200 customers by name and offers them coffee, tea or hot chocolate when they come in. He’s always on call — every client has his personal cell phone number.

“Everything we do is structured to the client’s needs, not the bank’s needs,” he says.

He hands out promotional gifts — toasters, alarm clocks and mixers — with every new account. Children get lollipops; dogs get treats.

The bank’s — and Michael’s — community-mindedness have made it the headquarters for local civic causes, and Michael’s office walls are plastered with plaques and plaudits from a variety of organizations. Right now, the conference room is packed with parcels destined for poor children. 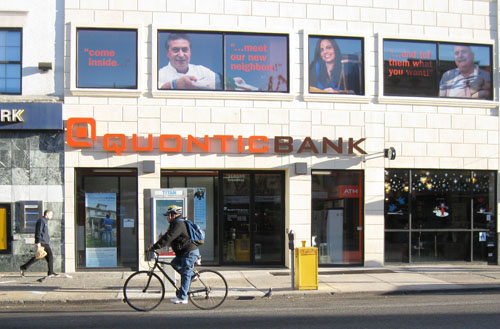 Photo by Nancy A. Ruhling
Quontic Bank on Broadway.

“We don’t just write a check to charity,” he says. “We actually get involved.”

All this down-home, good old-fashioned friendliness has worked: More than 200 people showed up for the grand opening, and the branch, staffed by Michael and six others, brought in $40 million in its first six months.

For Michael, banking isn’t all about money. It’s about helping people enrich their lives. 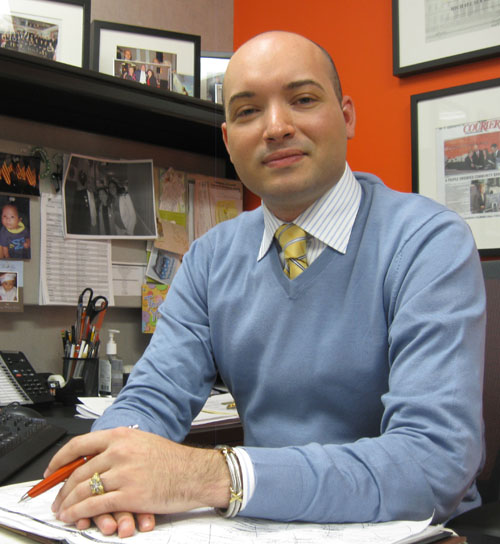 Photo by Nancy A. Ruhling
Michael started his banking career while in high school.

You see, Michael doesn’t come from wealth; he knows what it’s like to work really hard to get where you are. He grew up in Bayside, where he was raised by his grandmother. His parents abandoned him, so when he was a baby and she was in her late 70s, she took him in.

He was 16 when she died. He was left to fend for himself. 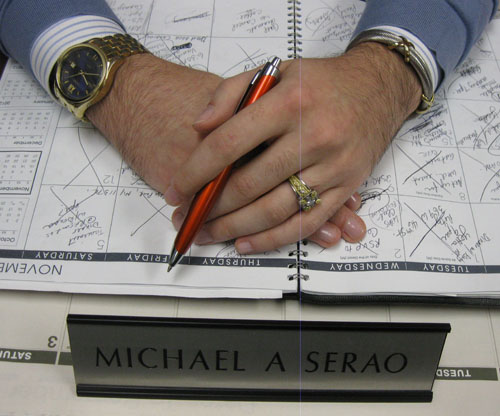 Photo by Nancy A. Ruhling
Success came early to Michael.

He didn’t have a place to live, so he moved in with friends and took a part-time job as a bank teller. “I had to wear my bank suit to school because I worked right afterward, from 2 to 6 p.m.,” he says. “I stuck out, but I also was voted ‘best dressed.’ “

When he graduated from high school, he took a full-time job at Commerce Bank as a supervisor. His grandmother had always told him to save for a rainy day. He did, and by the time he was 18, he had enough to buy a foreclosed apartment in Bayside for $98,000. 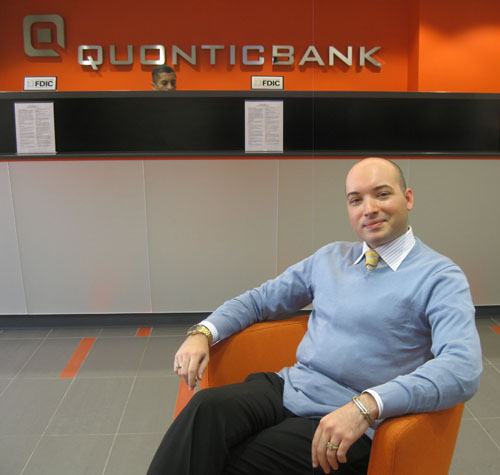 “I had no furniture for the first eight months,” he says. “I set goals for myself. I would say to myself, ‘You have to save enough to buy a TV for the living room.’ “

When Commerce offered him free tuition, Michael earned an associate’s degree from Queensborough Community College and a business certificate from New York University. He left Commerce in 2008 for Washington Mutual then joined Quontic in 2010.

Through the years, he has made a lot of savvy investments. He wasn’t saving for himself: He recently started a charitable foundation with his fiance, Jonathan Bench. 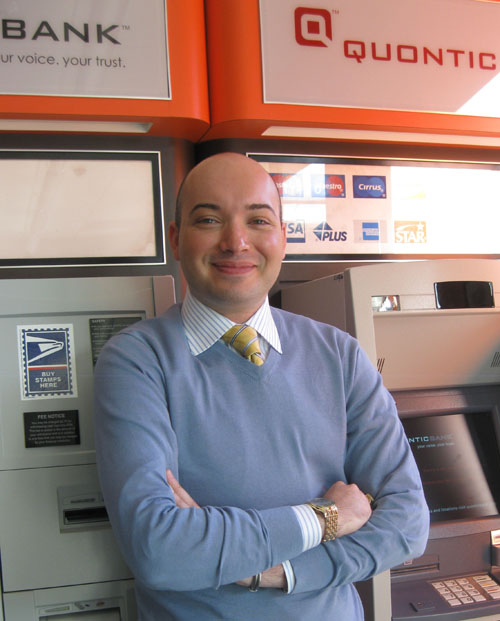 Photo by Nancy A. Ruhling
Michael sees banking as a way to enrich lives.

“We put in $250,000, and so far in one year we have given out $50,000,” he says. “People ask me why I would do this with half of my savings. It’s because I’ve never lost the sense of who I am or where I came from. If I need to be a teller tomorrow or vacuum the carpet to help out here, I will. I could afford to buy a really big house, but I’ll never give up the Bayside apartment because it’s the first one I bought.”

Michael’s days are spent at the bank, and his evenings are filled with community events and political meetings. But he still finds time to cook; he’s been tinkering with his grandma’s recipe for Sunday sauce with meatballs, and he thinks he’s finally got it right.

Michael has packed more success into his life than most people who are two or even three times his age.

“I’m very happy with the way things have turned out for me,” he says.