I moved to Astoria on a February day, when the daffodils were in full bloom and the snow was on the red, red roses.

It wasn’t just my front yard that was blossoming. Up and down the block, the mini gardens were filled with summer flowers in winter: black-eyed Susans, tulips, lilies, iris, dahlias, carnations and a profusion of petals in comical circus colors that I’m sure even God doesn’t have names for.

There were a lot of other surprising things in my front yard — a crumbling pink flamingo standing on its last leg, an illuminated grotto sans statue and a white lamb who listened with only one ear — so it took me a while to dig up the secret of my Miracle-Gro garden. 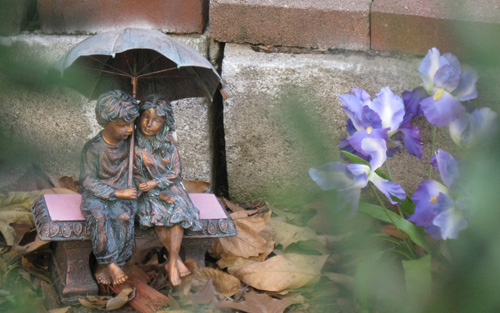 Photo by Nancy A. Ruhling
In Astoria, an iris blooms in autumn.

But I didn’t need a green thumb to figure out what had been staring me in the face: These flowers were fakes. Their petals were — OMG! — plastic.

In all my years as a journalist, I’d never come across anything like this, and I’ve encountered some very interesting things that most people would think odd. 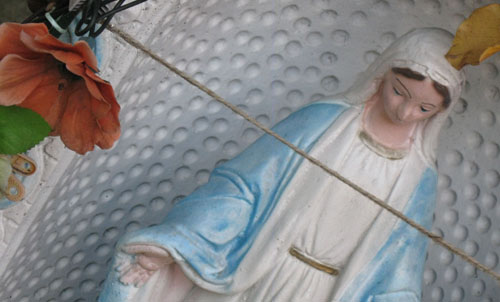 Photo by Nancy A. Ruhling
Not God’s work: plastic and plaster.

(In the interest of full disclosure: When I was growing up — in St. Louis, not Astoria — I will admit that my mother used to make plastic bouquets, but she kept them where they belonged — inside, imprisoned in vases. This was not — I repeat, not — because she was partial to plastic. Fresh-cut flowers were a luxury; our budget didn’t include so much as a buck for a bloom.)

Now, I’m a reasonable person, and I like to think that I’m open-minded. But nobody else paid any notice to the plots of plastic petals that, like vampires, couldn’t die.

Why would anyone plant plastic flowers in the yard? As in all things Astoria, there’s no simple or even complex answer that makes any sense. 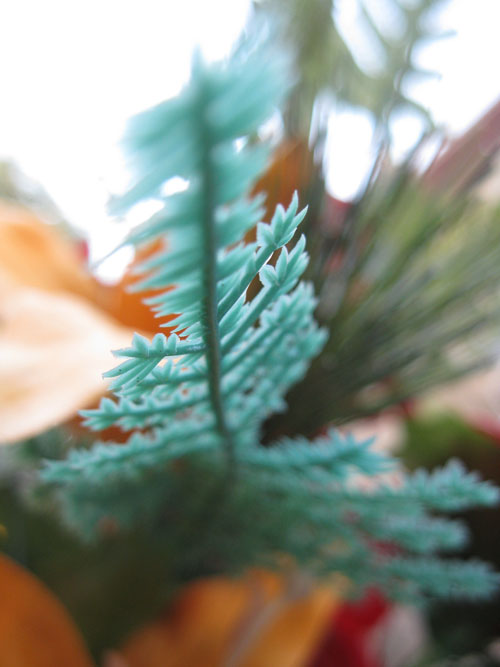 Photo by Nancy A. Ruhling
A fern reaches its plastic frond to the city sky.

“The flowers? I’ve been here all my life, and that’s the way it’s always been,” a 40-year-old neighbor told me.

OK, so why does the Greek woman down the street have them in the urns on her front porch? 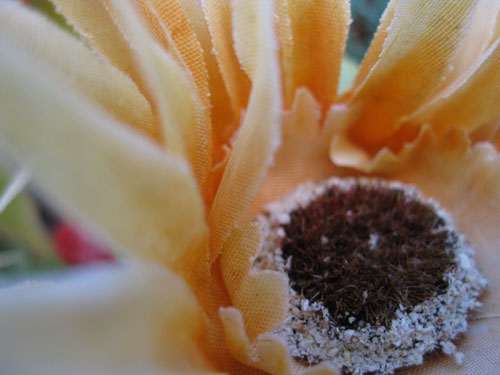 Photo by Nancy A. Ruhling
The eye of the black-eyed Susan has a synthetic stare.

Plastic flowers, I was told, are perfect: You don’t have to water them or trim them. They don’t drop their petals, and they stay in bloom all year round. And here’s the key — from the street, they look like the real thing, so passers-by probably think they are the real thing, which is what the whole idea is anyway.

Those who fancy themselves sophisticated, like some of my newer neighbors, don’t plant plastic; nope, they choose chic silk.

Well, what was I going to do about this problem that was right in my own front and back yards? 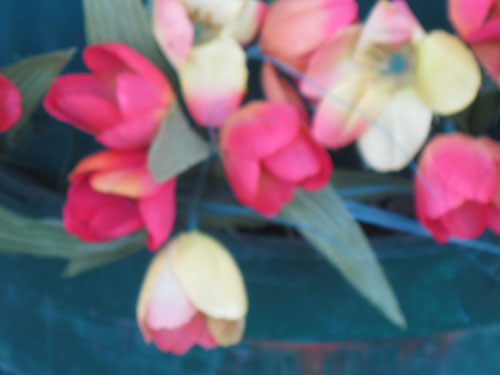 Photo by Nancy A. Ruhling
These guys are guaranteed not to wilt.

After a nano-second of consideration, I decided that these bogus bouquets had to be uprooted.

I took up the trowel and in short order I had ripped them out by their green plastic stems and planted them in the trash can, where they belonged.

When spring came, I watched to see what would come up and what my neighbors would say. 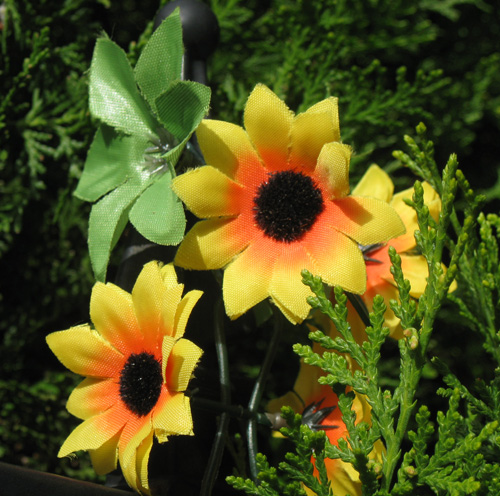 Photo by Nancy A. Ruhling
Sunflowers: No water required.

I was delighted because there were real day lilies and purple iris. My yard soon started attracting a lot of attention. People stopped and stared. They pointed.

Then one day a family came and plucked my garden clean. They told me they’d never seen such pretty flowers.

And, suddenly, I smelled the roses and understood the real appeal of the plastic petals.