Pull open the drapes! Betty Gelb wants to see the sunshine. She’s as excited as a kid going to the circus because she’s opened her eyes to another day.

She’s pushing 102, and, hey, you never know. She pulls out her crocheting — she’s making a red and black scarf for her physical therapist. She’s sitting in a wheelchair, she’s tethered to an oxygen tank, and she’s got an ACE bandage on her right wrist, but her golden crochet hooks are flashing like shooting stars.

Betty used to knit, too, but the needles hurt her fingers, so she switched to crochet. When she finishes this scarf, she’s going to make a baby blanket for one of her nurses at the New York Center for Rehabilitation Care, where she’s had a room for the last couple of years. 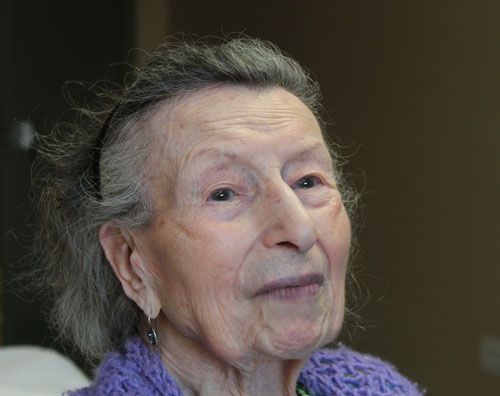 Photo by Nancy A. Ruhling
In September, Betty will be 102.

It’s early, and she hasn’t put on her makeup yet — she’s searching for an eyebrow pencil. Small but spunky and sharp as a carriage whip, Betty doesn’t look a day over 80. She laughs at that observation, mugging for the camera, doing her movie-star profile pose.

“Don’t worry about taking up my time,” she says. “I have no other dates.”

She smoothes down her wispy grey hair that’s as light and airy as cotton candy and harnesses it with a simple black headband.

“I guess I don’t look bad for my age,” she concedes, not even bothering to consult a mirror.

It doesn’t seem that she’s lived at the center very long, she says, but, then again, her first century flew by. 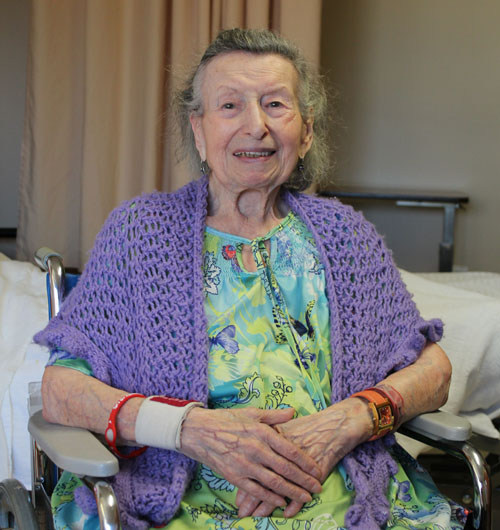 Photo by Nancy A. Ruhling
Betty’s in a wheelchair, but her flying fingers are free.

There’s not much that Betty does forget. Betty’s people came from Russia and Austria. Her parents called her Bessie, but she didn’t like that name. When she was 7, she declared that she was going to be Betty.

So it was that Betty, not Bessie, was raised in an apartment in Williamsburg, Brooklyn. On weekends, she took the trolley to visit her grandparents in Manhattan.

“We didn’t have a lot of money, but my grandparents gave me beautiful clothes,” she says. “I finally had to tell them to stop because my friends couldn’t afford such nice things.” 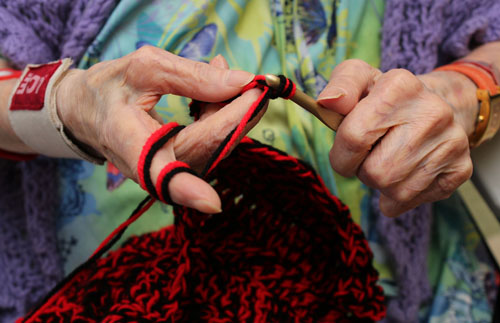 Photo by Nancy A. Ruhling
Betty skits scarves for her caregivers.

In those days, when Betty was a student at P.S. 145, push carts pulled up in front of the houses to sell fruits and vegetables.

“I can still remember the aroma of sweet potatoes that my grandmother cooked,” she says. “She lived on the third floor, and I could smell them from the street.”

She remembers her first crush — it was on her elementary school teacher — and talking on this revolutionary device called a telephone.

“My grandfather was the first person in his building to get one,” she says. “And everybody wanted to use it.” 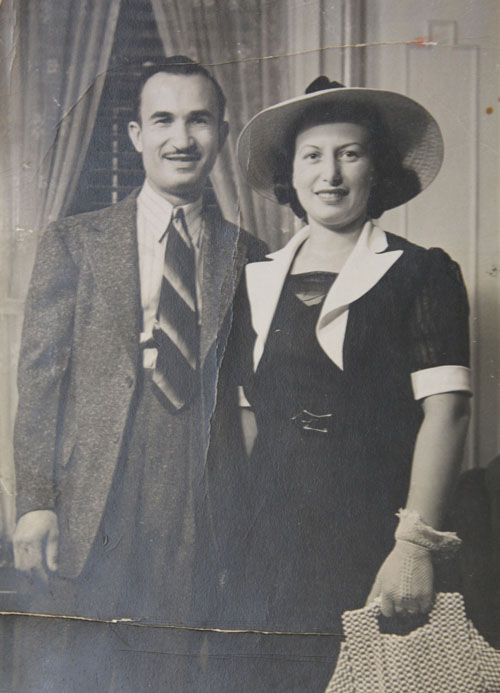 Photo by Nancy A. Ruhling
Eddie and Betty after their honeymoon in 1938.

Oh, did she mention that her parents had a candy store? “The Charlotte Russes were delivered in a box,” she says. “Each one had a maraschino cherry on top. I used to pick the cherries off and eat them, so my mother kept a jar of cherries on hand so she could replace them.”

When Betty graduated from high school, she got a job as a typist. Then Eddie Gelb came into her life. On their first date, they went to Radio City Music Hall to see Nelson Eddy and Jeanette MacDonald, America’s “Singing Sweethearts.”

“It was very romantic,” Betty says. “During the whole show, Eddie looked at me, not at the stage.”

A year later, when Betty was 28, they married. Betty kept working for a spell. After she had her son and daughter, she went to work in Eddie’s grocery stores. 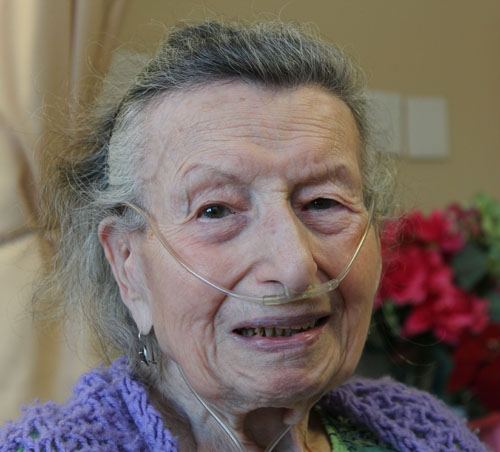 Photo by Nancy A. Ruhling
Betty looks forward to every day.

In the 1970s, they moved to her daughter’s two-family house in Astoria. A decade ago, Eddie died, leaving Betty to carry on by herself, which she has done splendidly.

Betty’s not sure why or how she has lived so long. “Maybe it’s mental,” she says, adding that no other member of her family has reached the century mark. “I don’t give up.”

She has a Pacemaker and a wheelchair. And a stack of detective novels, ranging from Sue Grafton to Alexander McCall Smith. She fancies gold sandals, but the farthest she walks these days is to the lunchroom and back during daily physical therapy. 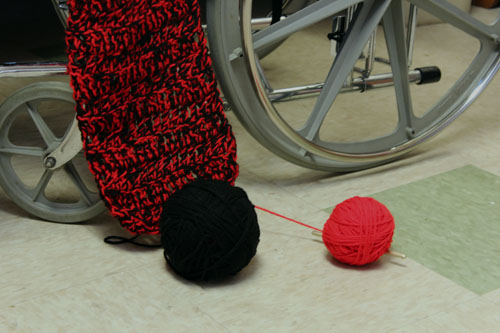 Photo by Nancy A. Ruhling
Balls of yarn trail her wheelchair.

She also has diabetes and a desire for chocolate; after she eats her daily treat, she tops it off with an insulin shot. Sometimes when she’s tired, she has to wear eyeglasses. And when it’s time for “lights out,” she has been known to cheat the clock, staying up late to watch a little TV.

Betty has done just about everything she’s wanted to in this life. Yes, she does miss her daughter, who comes to visit her every night after work.

“The only place I’d like to be is with her,” she says, choking up. “The minute she walks out the door, I want to go with her.” 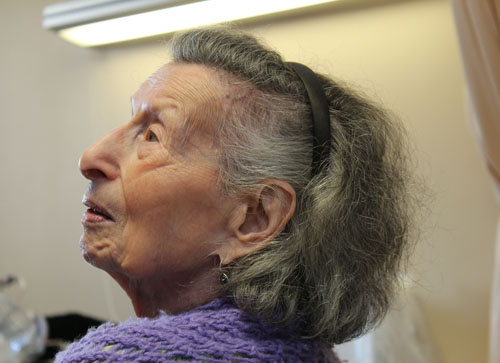 Photo by Nancy A. Ruhling
Betty’s not ready to rest yet.

Even though she knows it won’t happen, Betty hopes to return to her apartment. Her daughter is holding it for her. She’d like to play the piano again, but she’s not sure she would be any good at it. She taps her fingers on her dinner tray; yes, she can still do a simple tune.

At night, before Betty lays her head on her pillow, she looks up toward heaven and points.

There are scores of scarves to crochet before she goes to her final rest.