That’s what the neon sign says in capital letters the color of pale-pink petals. Wrapped in its rosy glow, Emily Zhang is sitting demurely like a mannequin at her little station inside the plate-glass window waiting for her first customer.

When the door opens, her baby-doll hands with their severely short nails, sans polish, fly into action as they have every day for the last six years since she and her husband, Michael Guo, opened Butterfly Nail Spa. She’ll spend the next 10 hours doing manicures, pedicures, waxes and massages. 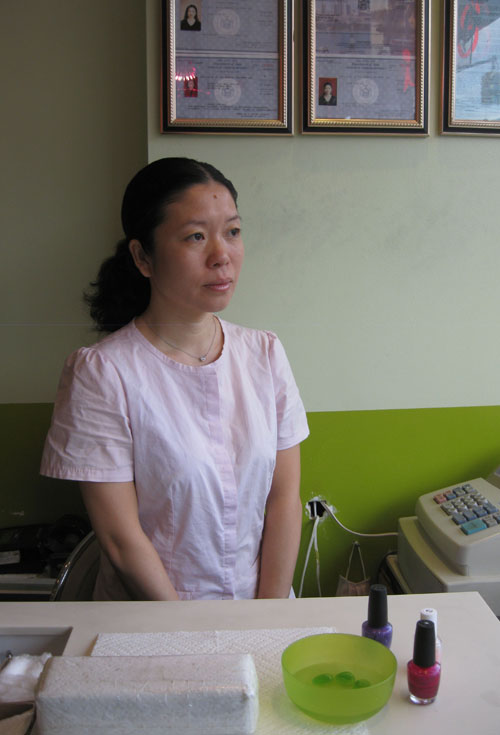 Photo by Nancy A. Ruhling
Emily at her station in Butterfly.

“I called the shop Butterfly because I love the beauty of butterflies,” she says.

Moshan, her 13-year-old daughter, settles into a seat next to her, hugging a Harry Potter hardback and a plastic container of Ferrero Rocher chocolates wrapped in glittering gold foil like gifts.

Emily, petite and oh-so-polite, has only lived in America a decade. She thinks her English is a little shaky and has asked Moshan to play interpreter. Moshan didn’t need much persuading: She’s a studious young woman who spends most of her free time in Butterfly anyway. 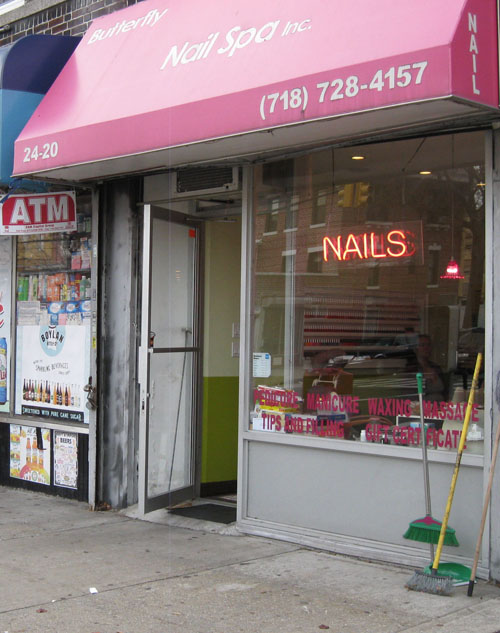 “I’d rather stay here,” she says, her silver braces flashing in the light like fireflies. “I’m scared to stay at home alone.”

Emily’s story begins in Tianjin, an enormous city in northern China, where she grew up.

Unlike Moshan, Emily is not an only child. Her mother, an opera singer, and her father, a factory worker, already had a daughter when she was born. The house was always filled with music, and, early on, Emily decided that she wanted to scale the scales, too. 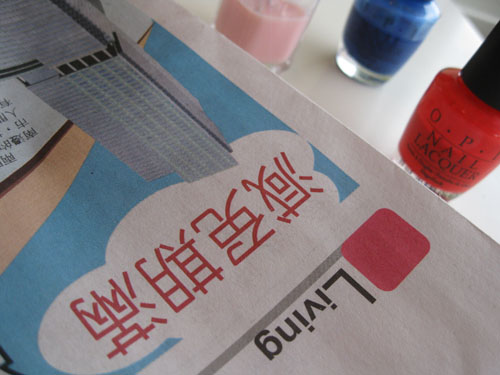 Photo by Nancy A. Ruhling
Bottles of polish and a Chinese newspaper are Butterfly staples.

After she graduated from music college, she picked up gigs in restaurants, bars and clubs. “When I sing, I take my feelings to heart,” she says. “Singing before an audience makes me feel like I accomplished something.”

It was at an audition for one of these jobs that Michael, a renowned pipa player, was so kind as to open a door for her. Emily was honored that this esteemed older gentleman would do this for her.

“He was famous,” she says. “I had never seen him before, but I knew his name.”

A customer getting her nails done can’t help but interrupt. “You’ve told me this story,” she says. “It’s much more romantic than you’re letting on. You were coming in the door and he was coming out and you met — that’s so romantic!” 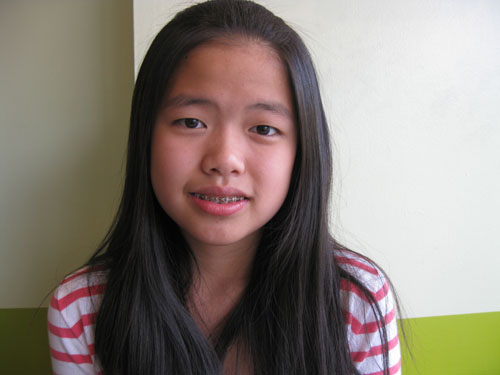 Photo by Nancy A. Ruhling
For Moshan, Butterfly is like a second home.

Alas, Emily didn’t get the job, but Michael somehow got her number and offered her a role in a show he was in. Soon, he was giving her singing lessons.

“He taught me pitches and tone and how to sing in a better way,” Emily says. “He’s not a singer, he’s a musician. I was surprised he knew such things.”

Before we go any further, Moshan would like to explain a few things. A pipa, she says, using her hands to draw a sinuous shape in the air, looks a lot like a guitar, but it has a skinny neck. She’s sure her dad’s an excellent player, but his singing, well that’s another matter. 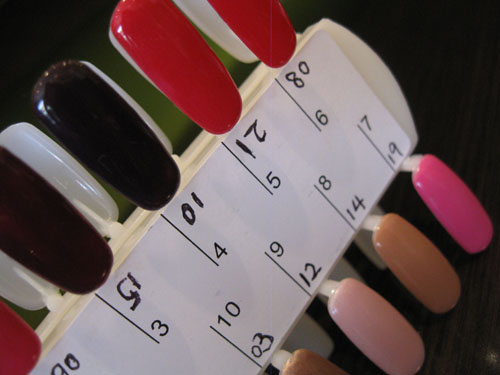 Photo by Nancy A. Ruhling
Nails, nails, nails in every color.

“You wouldn’t want to hear it,” she says, a serious gravity creeping into her chirpy voice. “He only does one song well, and that’s just to show off.”

Michael was smitten, but Emily had no idea he had an interest in her.

Moshan starts to giggle because the way her father chose to propose — he called Emily on the phone and asked for her hand in marriage, for heaven’s sake — is really silly and so boring. 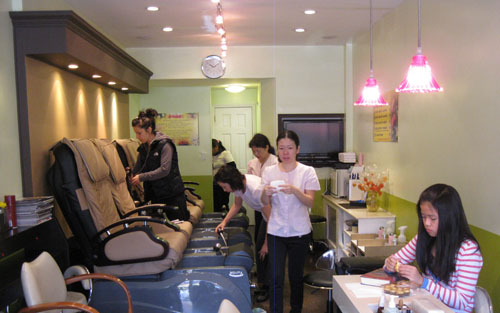 Photo by Nancy A. Ruhling
Another day unfolds at Butterfly.

“I told him I had to ask my mommy,” Emily says. “My mommy told me to do whatever I liked.”

What she liked was to be his wife. They continued to perform, and soon Moshan made them a family of three. When Moshan was 1, Michael took a job in New York City, and his wife and daughter followed two years later.

“I didn’t want to come,” Emily says. “But Michael said the air and water were clean, and the people were nice.”

Emily began taking singing jobs and to fill in the empty spaces in her schedule, she learned the nail business. She didn’t know a word of English. 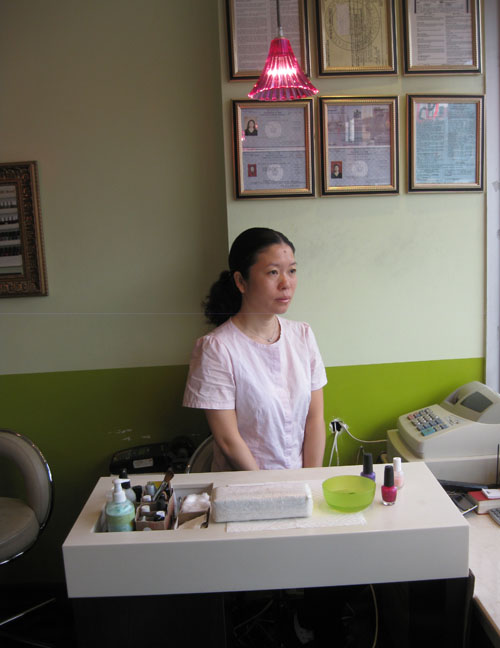 Photo by Nancy A. Ruhling
Emily waits for a customer.

When the nail salon at Crescent Street and Ditmars Boulevard became available, Butterfly came into being.

“The customers didn’t know me,” Emily says. “They would look in the window, but they wouldn’t come in. I got the first customer by telling her that if she didn’t like the way I did her nails, I wouldn’t charge her.”

She didn’t like her nails; she loved them. And she told all her friends about Emily. “I’m very gentle,” Emily says. “And I don’t just use my hands — I use my heart.” 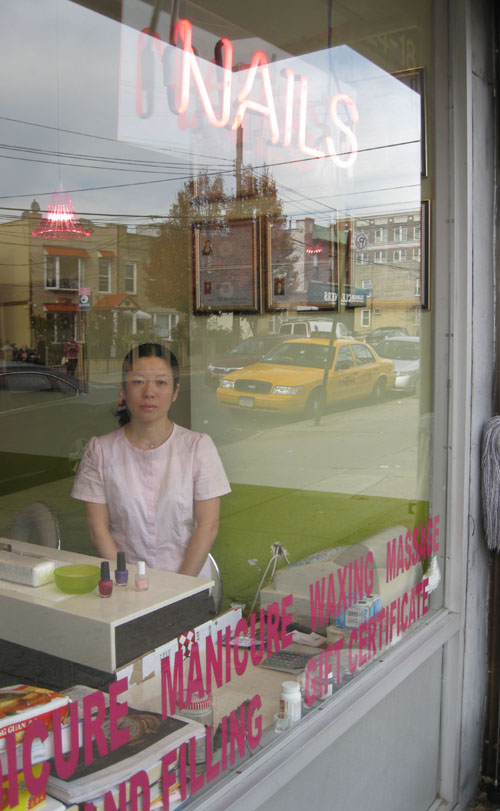 Photo by Nancy A. Ruhling
From her window, Emily watches the world.

Yes, Emily does have dreams of opening a bigger Butterfly salon, but she’s reluctant to leave this location. “My customers are like family,” she says.

Moshan picks up The Prisoner of Azkaban. She’s read it and the other Harry Potter books like a zillion times, but she can’t wait to get lost in its wizardry again. It, like the other volumes in her set, was a gift from a Butterfly client.

Emily goes to work in her window, and Moshan, turning a page, pops a chocolate into her mouth.