These words, which forever alter the futures of Tom Park and his six employees, are scrawled in cursive on a piece of lime-green cardboard taped to the front door of Johnny on the Spot.

Johnny on the Spot has been on this spot at Ditmars Boulevard and 37th Street for so long that nobody, not even Tom, knows when it opened. It had that name when he, full of hope and ideas, bought it nine years ago.

Tom has spent his career in the dry-cleaning business, and he lost a shop once before. But he’s 49 now, and he didn’t see this one coming. 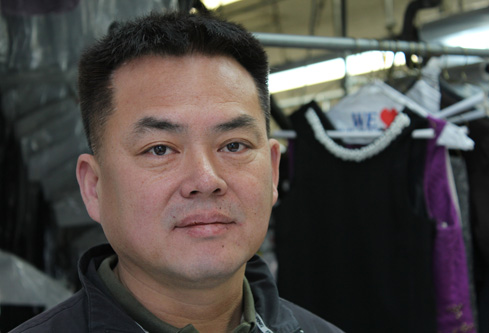 Photo by Nancy A. Ruhling
Tom Park, owner of Johnny on the Spot.

Tom, a stoic soul, isn’t angry or upset; he’s resigned to his fate. When he came to New York from Seoul, South Korea nearly a quarter century ago, he knew things would be tough. Actually, he didn’t really want to leave all that he’d ever known. 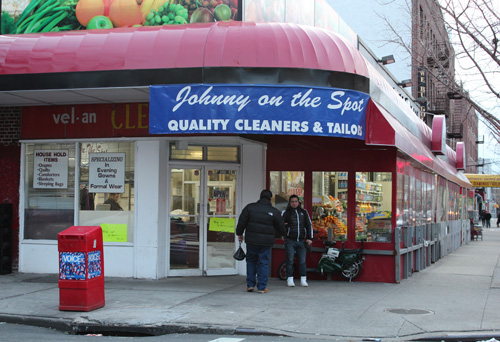 Photo by Nancy A. Ruhling
Johnny on the Spot won’t be at this spot any longer.

His family was poor, and when he was a teenager, his father, a tailor, got bitten by the American Dream. Tom’s mom worked in a restaurant, and with the money his father sent home, it was almost enough to raise Tom and his younger brother.

Tom had just finished a mandatory 2 ½-year stint in the military and was studying civil engineering in college when his father sent for him. 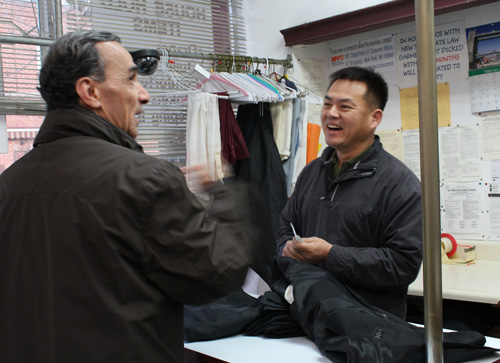 Photo by Nancy A. Ruhling
Tom bids good-bye to one of his longtime customers.

“I didn’t want to come, but he kept asking me,” Tom says. “I wasn’t a good student, and he convinced me that maybe I could get a good job here.”

Tom didn’t speak English and didn’t have any skills to speak of even if he had known the language, so he got a job in a Manhattan grocery store near Macy’s.

“I stayed only two weeks,” he says. “I didn’t want to spend my young life there.” 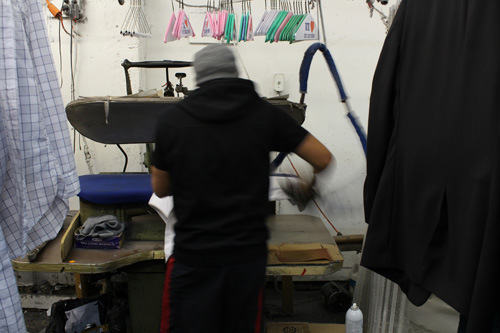 Photo by Nancy A. Ruhling
A worker gives the steam press a good workout.

So he became a delivery man for a dry-cleaning store and worked his way up to counterman. When his mother and brother immigrated to New York, Tom bought his own shop in Brooklyn, using money from the sale of their apartment for a down payment.

“I was working 14-hour days, and the store wasn’t making money,” he says. “So I sold it — I lost money — and went back to work in Manhattan.”

A little while later, he met a South Korean woman who agreed to be his wife. She worked in a travel agency, and little by little, over the course of three years, they managed to save $30,000. They borrowed an equal amount from her relatives and bought Murray Cleaners, a Tribeca drop-off establishment. 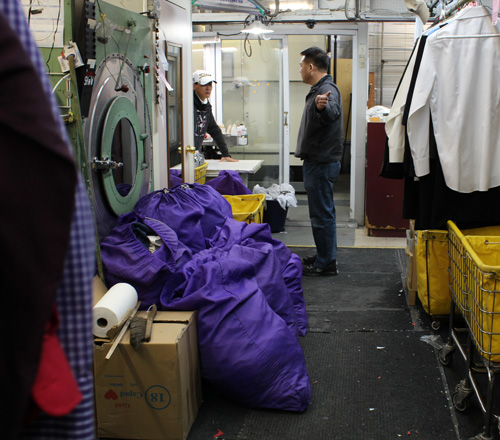 They worked Murray together, and by 1989, they had paid off its loan and had saved enough money to buy Johnny on the Spot. It works seamlessly: The clothes are cleaned in Astoria and delivered to Manhattan.

They bought a house in Great Neck, which they share with their 13-year-old daughter, 9-year-old son and Tom’s mother.

The raised rent took Tom by surprise. Johnny on the Spot wasn’t making a lot of money, but it was bringing in enough so he could get by. 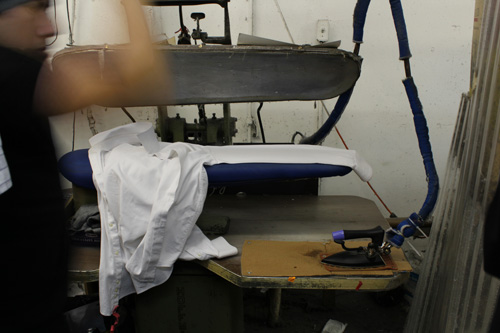 Photo by Nancy A. Ruhling
A white dress shirt gets its creases back.

“I thought, ‘Oh my God! I’ve lost a lot of money if this happens,'” Tom says. “Then I thought, ‘This is life; life is up and down, and this store doesn’t belong to me any more.'”

A customer walks in and drops off a pile of clothes, and Tom jumps behind the counter. Tom reminds him that Saturday will be his last day.

Right now, Tom doesn’t have enough money to buy another store, so he’ll have to find a dry cleaner to service Murray, where he will work with his wife. But he’s been scouting out Coney Island. 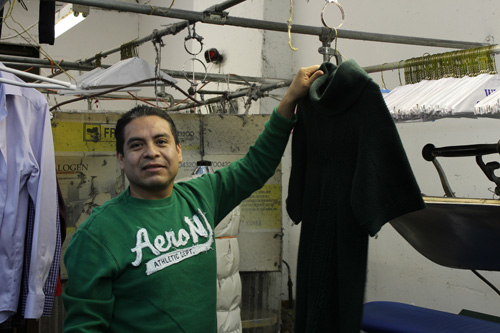 Photo by Nancy A. Ruhling
Mario Dominguez with a garment he pressed.

“I won’t come back to Astoria,” he says. “The people are nice, but the rent is too high.”

As for Johnny on the Spot, its presses will be sold and its dry-cleaning apparatus will be dismantled and sent to the scrap heap. Beneath the going-out-of-business notice, are the words that sum up Tom’s time in the neighborhood: Thank you. 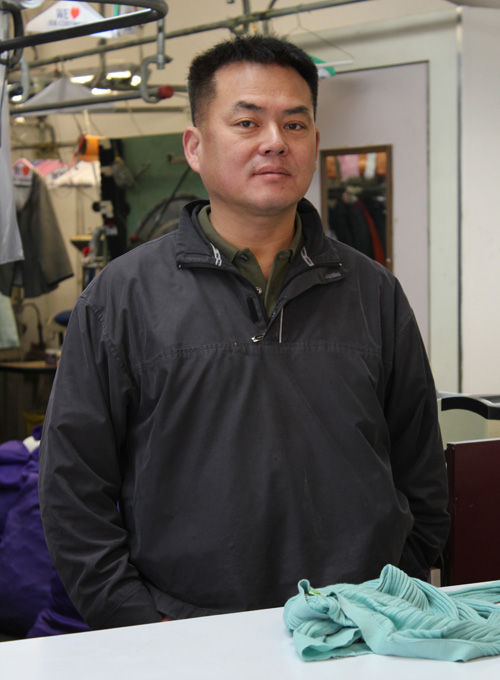 Photo by Nancy A. Ruhling
Tom mans the counter during his final days.

Soon, the building will become part of Trade Fair, which already has claimed some of Tom’s space. “They asked me if they could display some stuff outside, and I said yes.”

Tom doesn’t really have time to think about the future. The suits, shirts and skirts that cross the counter are what matter now. 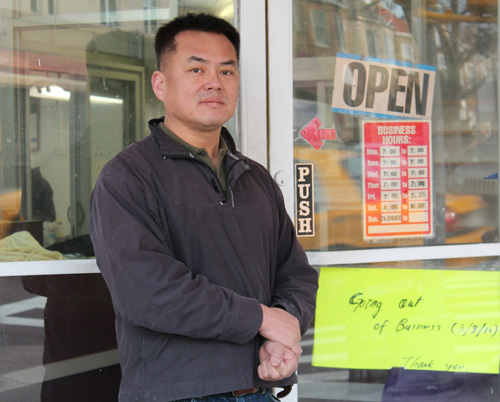 Photo by Nancy A. Ruhling
Tom hopes to make a clean start — somewhere else.

“I’m really tired,” he says as he contemplates the piles of purple bags filled with dirty laundry.

Seven p.m., the end of his 12-hour shift, seems years away, and Saturday may never come.