The snow-white truck is shiny new so Jonathan Forgash has to show it off. The star of his three-vehicle catering fleet, it has a double set of windows, industrial ovens, a slew of work stations and a built-in grill. He runs his hand along the kitchen’s stainless steel counter and smiles at his reflection.

Never in his wildest dreams did he think he would get to take this dream machine along for the ride of his life, serving celebrities and crews on TV and film sets. 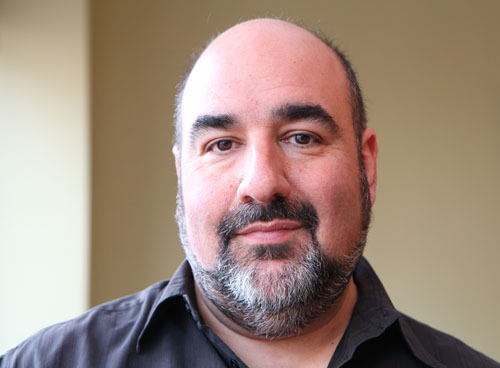 Photo by Nancy A. Ruhling
Jonathan, the owner of Starstruck Catering.

It reminds him of the days when he was starting out, and he ran what would eventually become Starstruck Catering out of his third-floor walkup, hauling trays of food down the stairs to a van equipped with hot holding units.

Food has always been the bread of Jonathan’s life. Growing up in Smithtown, New York, he watched his parents cook and took charge of most of the meals when they split up and his mother got a full-time job.

“My dad was a very traditional and classical cook,” Jonathan says. “My mother, on the other hand, was adventurous and insane in the ktichen. In the 1970s, she was woking on an electric stove when nobody even knew what a wok was. It was embarrassing. None of my friends ever came to dinner.”

Photo by Nancy A. Ruhling
Look at my new truck!

Although Jonathan tried college, it wasn’t to his taste, and he ended up working a 9-to-5 office job. Despite his stress and boredom, he might have remained there had a friend not asked for a favor.

“He was doing a photo shoot for Vogue, and the caterer bailed at the last minute,” Jonathan says. “I didn’t know that I was only supposed to make the food and drop it off. I cooked it there, and everybody was laughing at me. And I thought, ‘Wow! You can get paid to work with models.'”

It wasn’t long before Jonathan was cooking for the crews of commercials and music videos. He had no choice: He took so much sick time for these freelance projects that his boss, in a friendly move, fired him to get him to change careers. 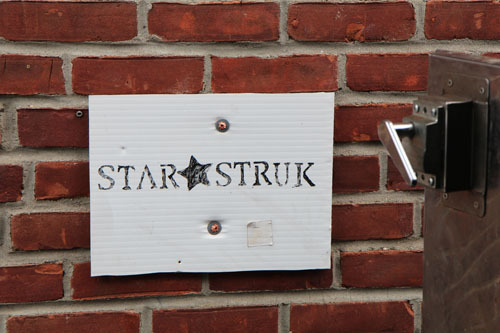 Photo by Nancy A. Ruhling
Starstruck’s spot at the parking lot; the sign maker forgot the C.

Since he had never worked in a restaurant, he volunteered to be an intern at a cooking school to bone up on technique.

For a decade, he freelanced. Along the way, he found time between jobs to get married. He and Jennifer, a math teacher, have a 5-year-old son, Leo. 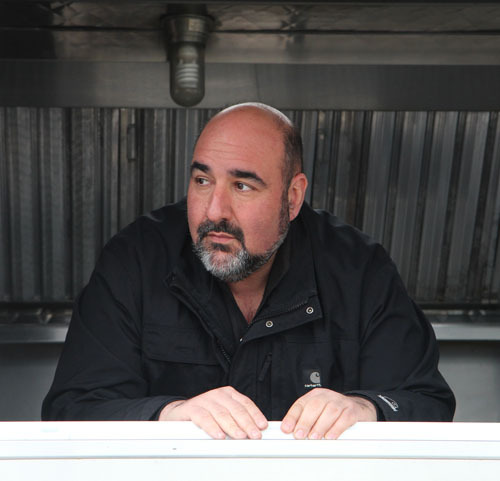 Photo by Nancy A. Ruhling
Chef Jonathan at his post in the truck.

For a while, he even opened a restaurant in Astoria, and when it failed in 2008, leaving him with a mountain of debt, he bought his first truck, a used vehicle, at a bargain-basement price.

“People on sets want home-cooked food more than four-star restaurant fare,” he says. “They want a comforting meal where someone takes care of them. I function like a hotel that has room service. It’s my job to cater to the wishes of everyone from the star to the set designer.” 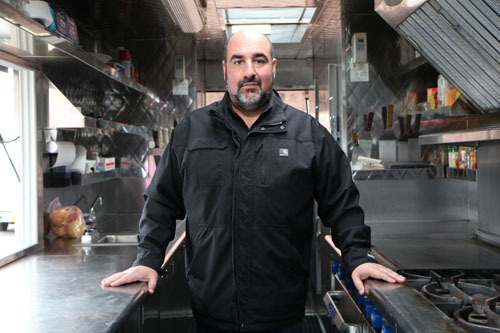 Photo by Nancy A. Ruhling
Jonathan, king of the craft-services counter.

Although it’s intimidating to cook for VIPs, especially when they are celebrity chefs, Jonathan gets more nervous making meals for family and friends.

“People expect me to be perfect,” he says. “It puts me under a lot of pressure.” 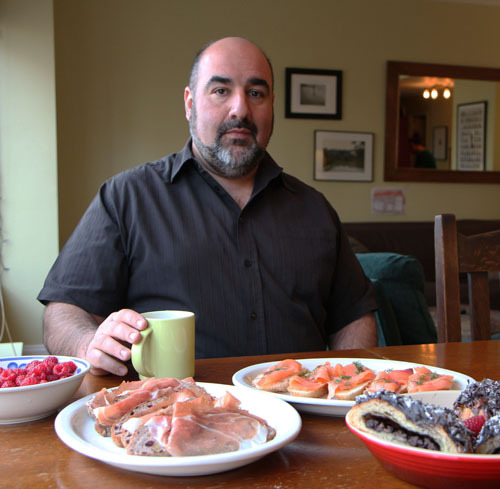 Photo by Nancy A. Ruhling
At home with a simple spread.

Jonathan is not a baker; the art of measuring is too precise, and his hefty hands, which look like they are made to hold a sledgehammer instead of a spatula, don’t do dainty desserts.

“I like to think of myself as the Jackson Pollock of chefs,” he says. “I like to play and invent.” 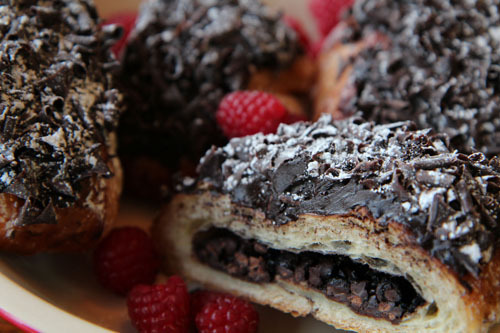 Photo by Nancy A. Ruhling
Jonathan doesn’t bake; the croissants are from Leli’s Bakery.

Now, Starstruck is a five-man traveling show, and Jonathan, who runs its business side, is rarely on the trucks. After two decades of duty as chief chef and driver, it took him a while to adjust, but he’s settled in to a beautiful domestic routine.

In the morning, he makes Leo and Jennifer breakfast. This is a really tough job. If you think stars are finicky, just try feeding Leo, who is going through an I-hate-everything phase. 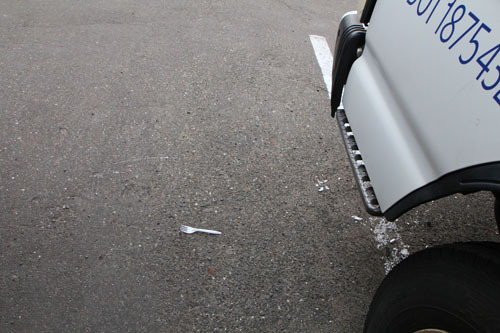 Photo by Nancy A. Ruhling
One for the road.

During the day, Jonathan conducts business, stopping in time to get Leo from school and cook dinner for the family.

“It’s cool to get to do all these things with my son,” he says. “Just the other day, we made biscuits and pita bread together.”

He locks the truck. It’s time to fix lunch. For Jennifer and Leo.