Jim Ruchalski, a pack-a-day guy, has gone to a lot of trouble to clear the stale-smoke scent out of his apartment. That’s why the candles are burning and the fans are humming on high. 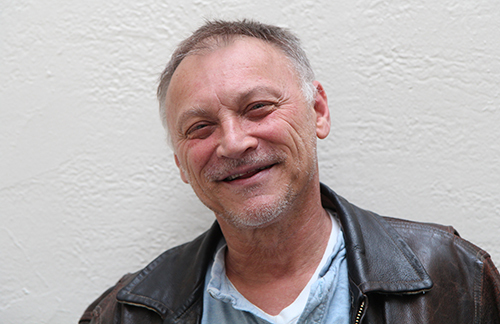 Photo by Nancy A. Ruhling
Jim’s a geologist for the city.

“I can open a window,” he says, looking at the hookah in the corner and the empty ashtrays in the living room.

Jim, who has neon blue eyes and smile lines etched into his weathered face, has been smoking since he was 13. He’s quit trying to quit.

“The longest I went was six months,” he says, flipping a lighter in his hand. “I always found as many reasons as Hallmark cards to start again.” 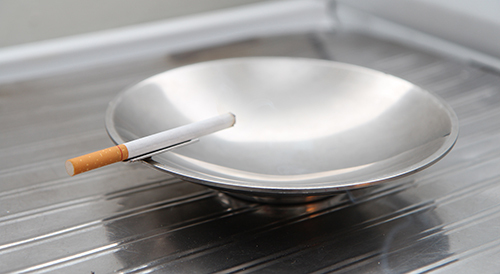 Photo by Nancy A. Ruhling
Follow the cigarette smoke to Jim.

He promises not to light up. If he has to, he’ll go in the kitchen and hang his cigarette hand out the window between puffs.

Jim sits down and plants his stocking feet on the coffee table. Ah, now he feels better.

He’s not really sure where to begin — a cigarette sure would help him — so he starts in Buffalo, New York, which is where he and his smoking habit were born.

His great-grandparents came from Poland, and by the time Jim and his four siblings came into the picture, everyone was speaking English. 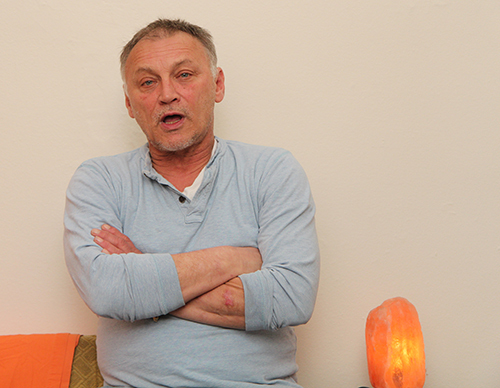 Photo by Nancy A. Ruhling
He’s had lots of adventures.

“I never learned Polish,” he says. “I only know bits and pieces that I picked up once I started working.”

It’s hard to believe, even for Jim, that his education started in the conservative confines of Catholic schools, where he was required to call himself James.

He didn’t find himself — or cigarettes — until he was sent to a public high school. 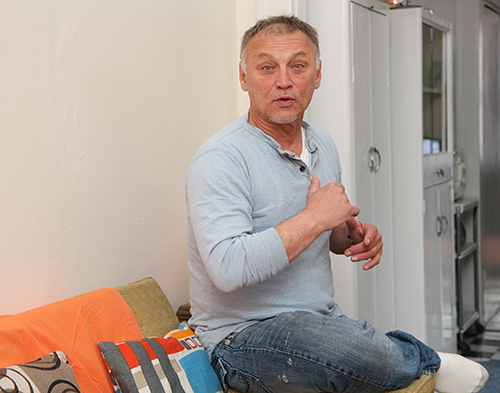 Photo by Nancy A. Ruhling
In his youth, Jim embraced the hippie culture.

“It was culture shock,” he says. “I had never seen students fighting before. I was very short, and smoking made me more adult.”

It was the psychedelic ’60s, and Jim embraced the hippie culture.

He made love, not war, grew his hair long, smoked pot, tripped on LSD, attended Woodstock and communed with nature. 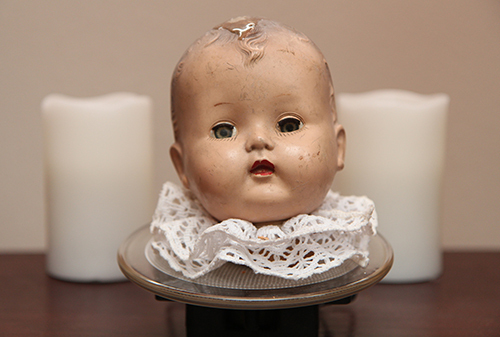 Photo by Nancy A. Ruhling
Jim’s decor is retro chic.

Instead of going to school, he went to work, first in a clothing factory (“I matched plaids on Johnny Carson suits and hated every minute of it”). He drove a cab for a while before finding work in a record album warehouse.

When he got tired of that, he headed to California, where he got a job installing chain-link fences in the San Fernando Valley outside of Los Angeles.

Homesick after a year, he returned to his Buffalo warehouse job. At 25, he enrolled at Buffalo State and began studying geology. 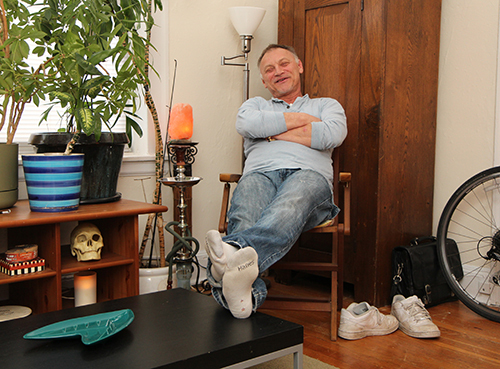 Photo by Nancy A. Ruhling
Picture him with a cigarette in hand.

“I used to look at the 250-foot-high cliffs in the Zoar Valley near my home and try to imagine how they could happen,” he says. “I needed to know more.”

Jim landed a series of jobs in environmental consulting that took him from Buffalo to Washington, D.C. and Philadelphia. He had a lot of adventures, like the time he smoked a joint at the top of the Pentagon, but there are too many to tell in one sitting.

When he got laid off, he came to New York City to share an apartment with a buddy. He cashed in on his credit cards while waiting for something to turn up. 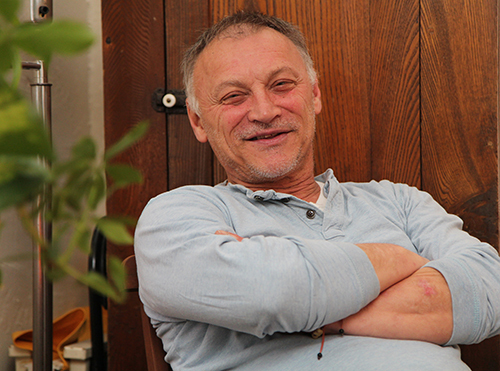 Photo by Nancy A. Ruhling
His job takes him to major construction sites.

“I racked up $50,000 in debt and eventually declared bankruptcy,” he says.

After a 10-year stint with yet another environmental firm, he became a senior project manager for the New York City Department of Design + Construction.

“I love the job because as our motto says ‘we build the city,'” he says. “I jump out of bed every morning; I can’t wait to get to work. It’s the first time in my career that I’ve gotten to do geology.” 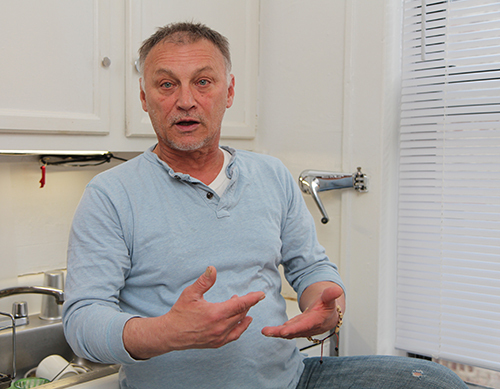 Photo by Nancy A. Ruhling
He was at Ground Zero right after 9/11.

When 9/11 happened, Jim and his team were among the first on the scene. They spent four months working at Ground Zero, exposed to toxins.

Jim pulls up his sleeves: His arms are covered with red welts from a rash that itches like wildfire. They also are all over his back and legs. The doctors can’t diagnose the skin condition or make it go away.

Swimming used to make him feel better, but he stopped a couple of years ago when he became self-conscious about the scars. 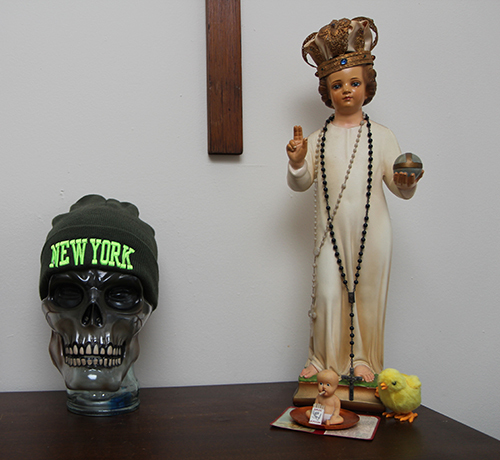 Photo by Nancy A. Ruhling
The religious statue belonged to his mom; the skull is his.

He still rides his bicycle, thinking nothing of pedaling for 10, 20 or even 30 miles.

Jim is getting ready for the next phase of his life. He’s 61 and figures he’ll be working for seven more years. He’s not quite sure what he will do, but he knows where he’ll be: back in Buffalo.

“By then, I may need my family to take care of me,” he says. “And I know I won’t be able to afford the rent here.”

Besides, most of his friends have moved away or died.

He doesn’t have a wife or children. 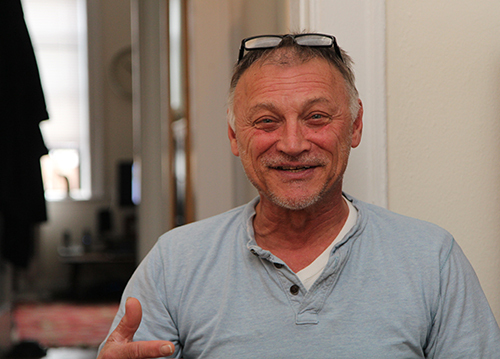 Photo by Nancy A. Ruhling
When he retires, he’ll go back to Buffalo.

“I had a lot of fun playing around,” he says, grinning. “But I’m not young or handsome any more.”

He doesn’t have debts or regrets. But he has cigarettes.

The closest thing he has to a companion is 7-year-old Titus, a friend’s blockhead yellow lab.

Jim takes him for 2-hour walks four or five times a week.

“We’re two old men,” he says, putting a cigarette in his mouth.