At Steinway Street and 35th Avenue, there’s a patch of pavement that since May 1947 has been designated a public playground. 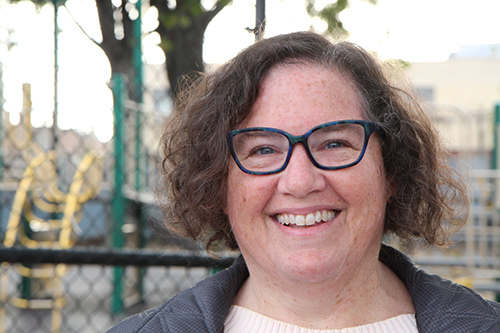 Photo by Nancy A. Ruhling
Nancy’s on Community Board 1.

Nancy Silverman knows this not because she has children, which she does not.

She knows this because it’s the only open space near her apartment, and she frequently walks or cycles by it. 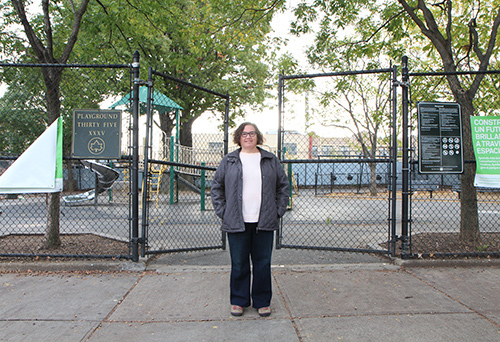 Photo by Nancy A. Ruhling
She helped get funding for Playground 35.

Imprisoned like a penitentiary by a sky-high chain-link fence, the space, which has been christened, inmate-like, as Playground 35, is not a pretty place.

And it’s always crowded – kids are climbing on the jungle gym, flying through the air on swings and scrambling on the life-size polar bear statue whose most distinguishing feature is its patches of peeled-off paint. 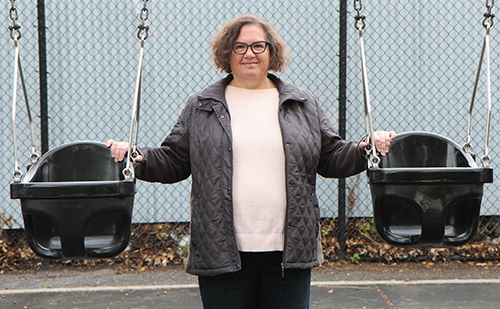 Photo by Nancy A. Ruhling
The playground is at 35th Avenue and Steinway Street.

“I thought they deserved better,” Nancy says. “I wanted to give the playground some love.”

Instead of complaining, Nancy, the co-chair of Community Board 1’s Parks/ Recreation and Cultural Affairs Committee, did something about it.

When the city doubled the funding for the Community Parks Initiative, she pushed to make Playground 35 No. 1 on the board’s list, and it was awarded $1 million to $3 million for a makeover. 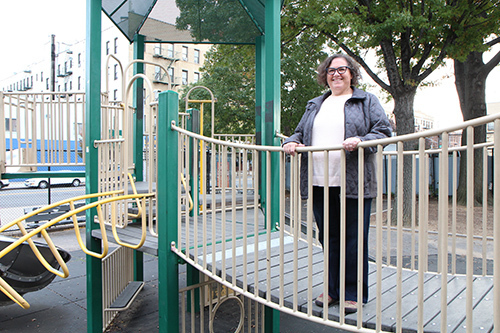 Photo by Nancy A. Ruhling
Nancy moved to Astoria 19 years ago.

A remarkable accomplishment, considering that it is only recently that Nancy, who moved to Astoria 19 years ago, got involved in community matters.

She was born and raised in the sleepy suburbs of Long Island. But she never really fit in in Jericho or its old-school read-and-recite education system.

“I loved learning, but I didn’t like the traditional school environment,” she says. “I knew I didn’t want to go to college. But I did for a while and failed because I never went to classes. I got a job instead.” 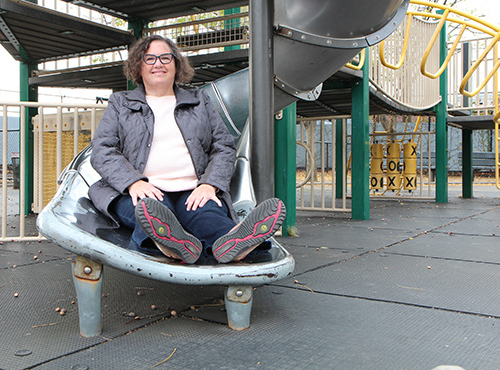 Photo by Nancy A. Ruhling
Nancy doesn’t have children but she thought the kids at the playground deserved better.

At 20, she relocated to Los Angeles, a city that she had frequently traveled to to visit a cousin.

“A friend and I spent six weeks driving across country in a used Beetle convertible,” she says. “I wanted to live near the beach.” 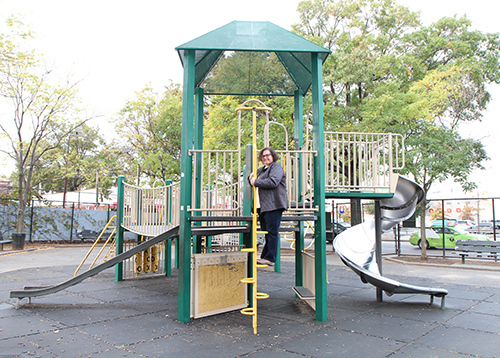 Photo by Nancy A. Ruhling
Nancy grew up on Long Island and lived in Los Angeles for a while.

After working in a series of retail jobs and at a public library, Nancy, at 26, enrolled at Antioch University Los Angeles, where she earned a degree in liberal arts while working full time.

Acceptance into a doctoral program in public art at New York University brought her back to the East Coast, where she held a series of academic positions before becoming coordinator of the PhD program in English at CUNY’s Graduate Center. 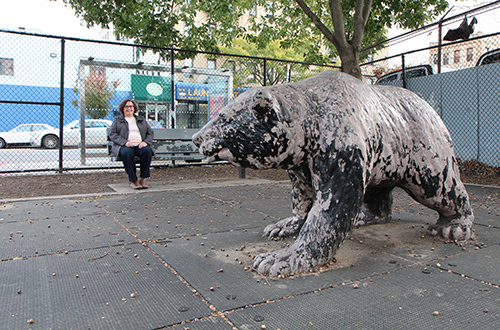 Photo by Nancy A. Ruhling
The polar bear will be repainted as part of the makeover.

“I worked on my degree for nine years, but I never finished my dissertation,” she says. “At some point, I realized that I could earn more money working where I was.”

Nancy’s an urban cyclist who frequently pedals not only past Playground 35 but also does the 10-mile round trip to and from her office at the Graduate Center in Manhattan.

Nancy, a solid, feet-on-the-ground woman, parks her jet-black eight-speed Trek in the living room of her tiny apartment, which is just big enough for her and Betty, her calico cat. 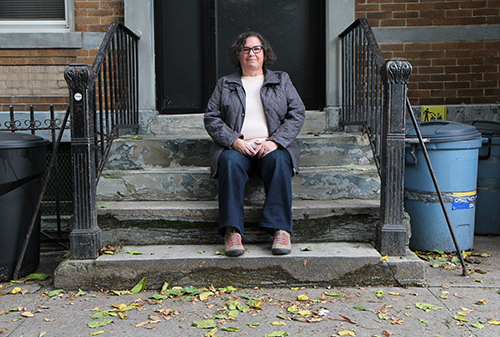 Photo by Nancy A. Ruhling
Where you’re likely to meet Nancy: on her front stoop.

“The bike has opened up worlds for me,” she says, adding that she also likes to cycle to Flushing Meadows-Corona Park, a trip that takes an eternity on the subway.

She found herself drawn to transit issues and began working with Transportation Alternatives’ Queens committee.

“I went to a lot of meetings as a bike advocate,” she says. “They introduced me to local government.” 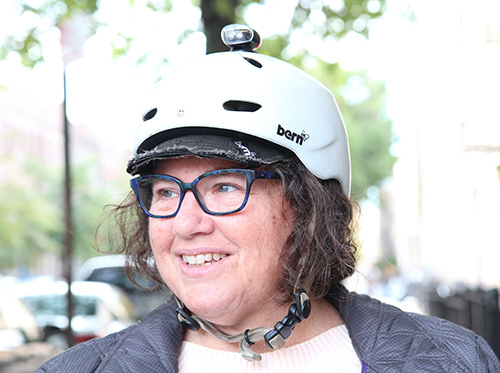 Photo by Nancy A. Ruhling
Nancy often cycles to her office in Manhattan.

“I’m the progressive voice for what Astoria is today,” she says, adding that she’s the advocate for the southern part of Astoria near Northern Boulevard. “My job on the board is to represent the community and pay attention to the things like Playground 35 that are not getting the attention they deserve.”

Her personal and professional advocacy soon dovetailed, and Nancy found herself in Albany on behalf of her union, the Professional Staff Congress, during recent contract talks.

The issues facing CUNY and Astoria, she says, overlap. 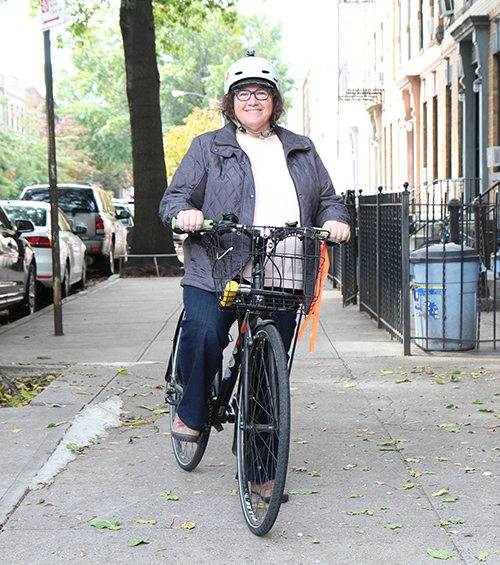 Photo by Nancy A. Ruhling
She may run for City Council in 2021.

“I want to keep CUNY affordable for students,” she says. “So many of the students and union members live in Astoria, which is getting less and less affordable.”

With Playground 35 set to get its makeover in the spring, Nancy has turned her attention to addressing the next big issues on her priority list, which include making 21st Street safer, working on the $30-million upgrade of Astoria Park, siting docking stations for Citi Bike and making the neighborhood more cycle-friendly.

“I will continue to be involved in my community,” she says. “Someday, I’d like to seek an office in local government.”

She mentions the 2021 City Council race and smiles.