The lights and stars are twinkling in tandem. The women are shopping in the outdoor farmers’ market, and the men are sawing logs and stomping on grapes to make wine. 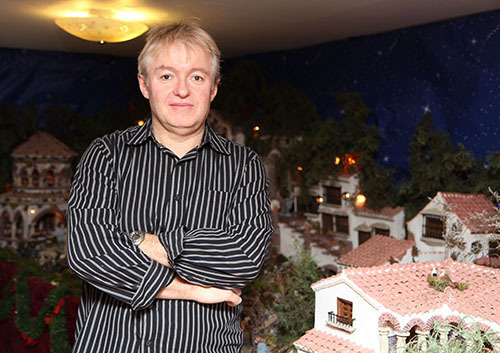 Photo by Nancy A. Ruhling
Jose with his Christmas village.

A crowned king on a camel approaches, bearing gifts for Mary and Joseph’s newborn babe in the stable. 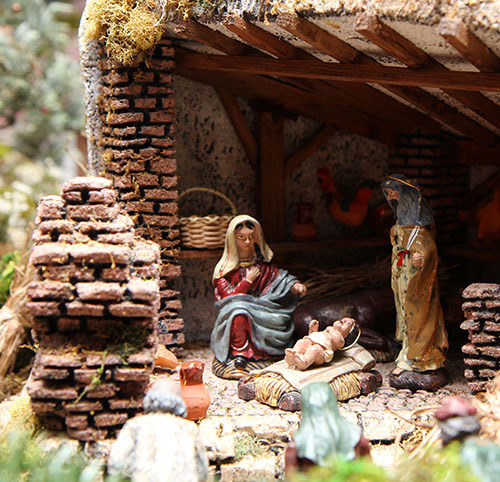 Photo by Nancy A. Ruhling
The nativity is the shining star.

Every time Jose looks at it, he thinks of home. Nativity scenes such as this are a tradition in Cabra, the rural town in Spain where he comes from.

Most people buy them, but Jose has been making his own for nearly three decades. 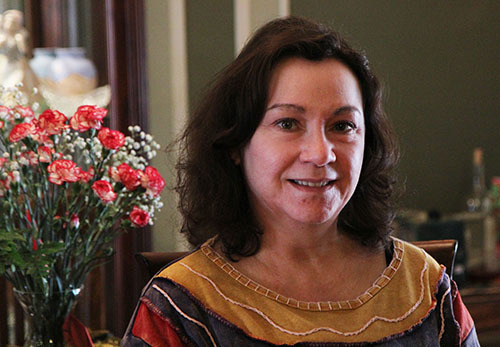 Photo by Nancy A. Ruhling
Cecilia met Jose in a Yahoo chat room.

Jose, a quiet man with tinsel-shiny golden-silver hair, isn’t sure why he crafted his first one when he was 20, but he has continued the custom every year since.

The ritual has become particularly important since 2008, when he settled in Astoria with Cecilia, his sweet, soft-spoken bride. 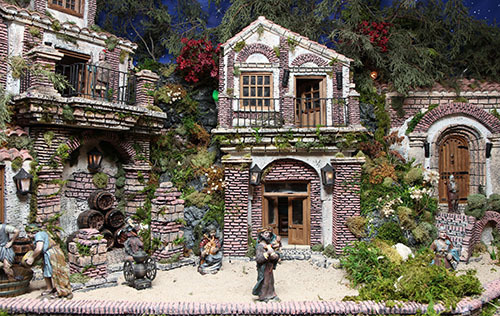 Photo by Nancy A. Ruhling
The Styrofoam structures are Spanish in style.

Unlike Joseph and Jesus, Jose’s not a carpenter by trade. He’s spent most of his career as an electrician. He taught himself to use a hammer and nails, skills that have proved useful in the construction of his miniature municipality.

Cecilia, who was born and raised in the house they live in in Astoria, and Jose met in a Spanish-language Yahoo chat room in 2005. 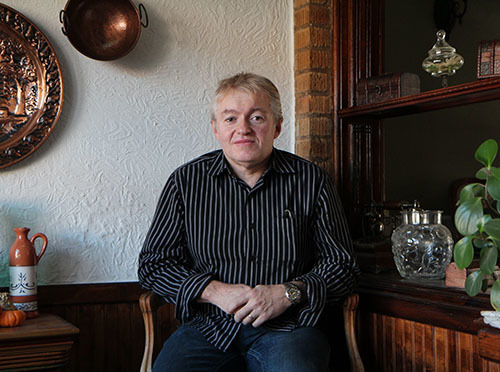 Photo by Nancy A. Ruhling
Jose did most of the renovations in his house.

Cecilia’s dad was from Calatayud, and her mother was a native of El Tiemblo. They met and married in New York. Cecilia is their only child.

Cecilia had been married, briefly, before and had spent nearly a quarter century in Tucson. In 2001, when she was diagnosed with breast cancer, she returned to Astoria. 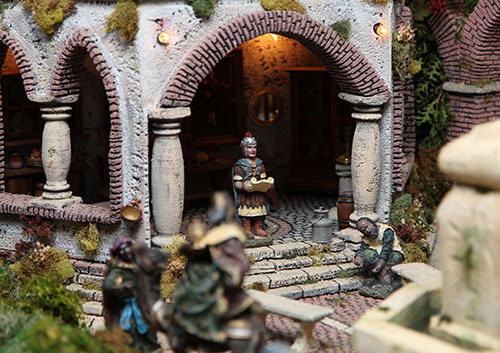 Photo by Nancy A. Ruhling
A soldier stands guard.

Jose and Cecilia pretty much fell for each other right away, probably because they had a lot of things in common, including their love of the Christmas celebration.

It’s not unusual for them to leave the house decorated from Thanksgiving to April. 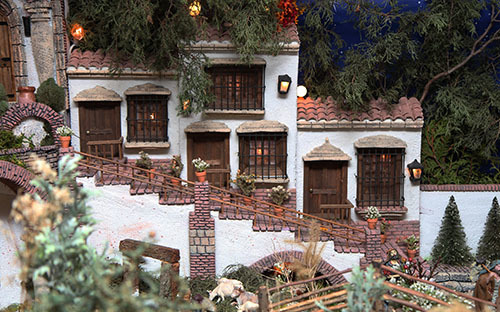 Photo by Nancy A. Ruhling
The delight lies in the details.

“We never want to let it go,” Cecilia says. “It’s so festive it lifts my spirits. For us, it’s not about religion, it’s about peace on earth and good will toward men.”

Jose, who is still learning English and relies upon Cecilia to be his translator, spends 500 to 600 hours every year creating the village, which is modeled after the traditional stucco and terra-cotta architecture of Cabra. 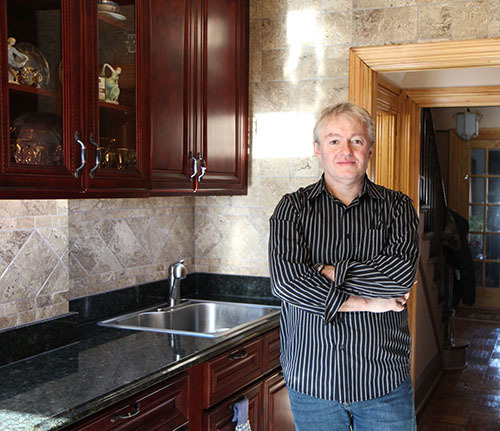 Photo by Nancy A. Ruhling
Jose in the kitchen he created.

The village, which includes a mill, a bridge, a flowing fountain, houses, a castle and the manger, is made of carved and painted Styrofoam. The roofs are terra-cotta tiles; the fences, windows and flower pots are copper wire dipped in glue; and the tree leaves are sisal that is cut and painted green. 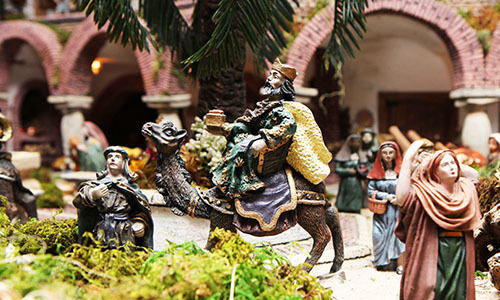 Photo by Nancy A. Ruhling
A king comes bearing gifts.

She smiles, remembering how much fun they had doing it.

It is populated with figures Jose buys from Christmas shops in Spain.

Right now, the village is located in Cecilia and Jose’s finished basement, where it rests on a 13-foot by 5.5-foot table. Some seasons, they display it upstairs, carrying it up piece by piece. 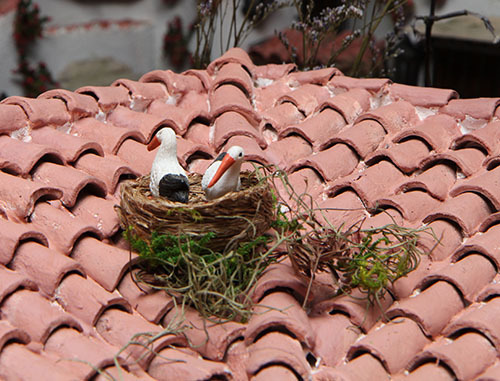 “Making it is entertaining for me to do,” says Jose. “I like to see the things in my imagination come alive.”

When Jose finishes a village, he gives or throws it away and starts another. He considers each one a creative challenge.

He’s also become quite handy in his regular-size house, where he designed and constructed a kitchen and bathroom, restored the enclosed front porch, repaired the ceilings and made wooden radiator covers and moldings for the baseboards, doors and windows. 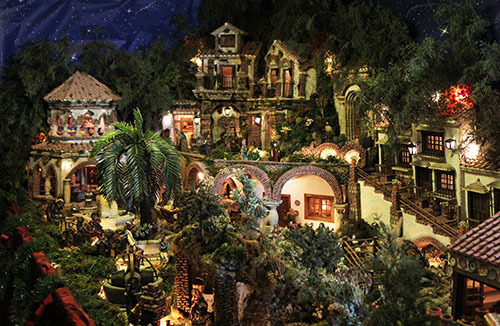 Photo by Nancy A. Ruhling
All decked out for the holidays.

He says he doesn’t miss Spain. That’s probably because he and Cecilia visit his family there twice a year. Recently, they bought a 65,000-square-foot property in Cabra that has a chalet and a 40-tree olive grove.

When Cecilia retires in a couple of years from her job as an administrative assistant for the National Labor Relations Board in Brooklyn, they plan to spend more time there.

They will leave the Christmas village here.

It will be a good excuse for Jose to start another one.