She starts by saying that she doesn’t have a lot to say. In the 79 years God has allowed her to do good on his earth, Eileen P. Cuhaj has always been the quiet one. It’s hard to break old habits.

Her reticence stems from her childhood; she had four older brothers, and it was hard to be heard over them. In a sense, she and silence grew up together.

She came in when the Great Depression was in diapers, and she learned to make do. She didn’t know any better.

“I had one doll and one doll carriage,” she says. “At a time when there were no cars in Astoria, we played marbles in the street. In later years, we all went to the roller rink and learned to do dancing on skates.” 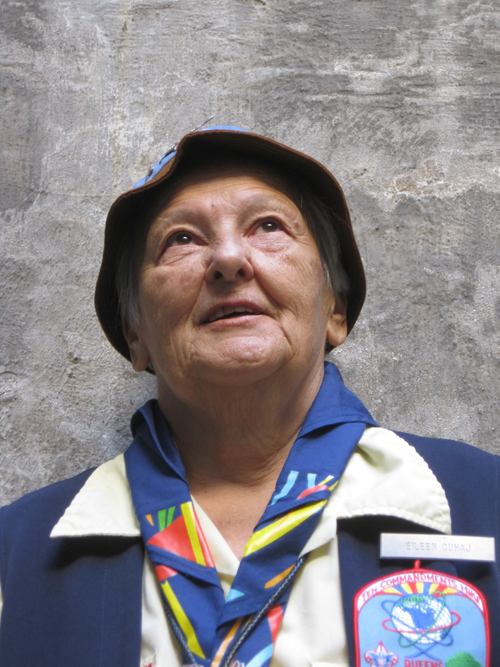 Photo by Nancy A. Ruhling
Eileen looks to God.

Eileen, a plain, serious soul with a wisp of white hair and wire-rim spectacles that make her brown eyes sparkle, was raised a good Catholic girl. All these years, she has called upon her faith to sustain her.

Although she considered becoming a nun, after high school, she dutifully joined the workforce, first taking on a clerkship at a tobacco company then transferring to a job in finance.

When she joined the bowling league her brothers set up, she met the man who would become her husband. “It wasn’t love at first sight,” she says. “Like me, George was quiet; we never did have much to talk about.” 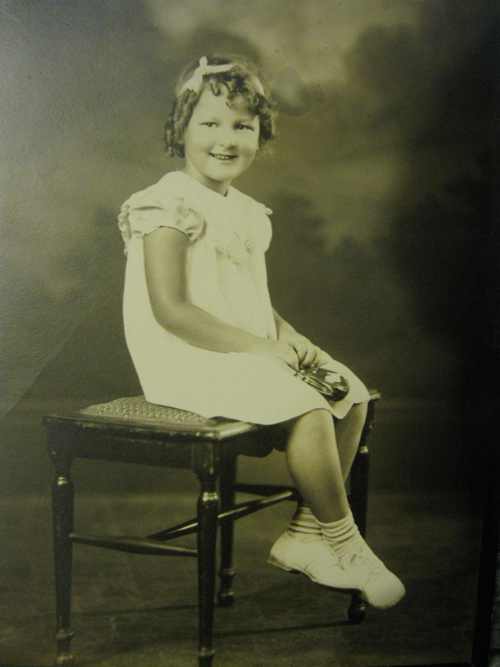 Photo by Nancy A. Ruhling
Eileen at Scouting age.

It wasn’t long before she had quit working to have two sons, who allowed her to stay right where she wanted to be — in the background. “Boys run in the family,” she says.

She did the things that mothers in those days did: devoted her life to family and God. If she had other dreams, she left them at that.

The boys attended the school at Most Precious Blood Roman Catholic Church, and George and Eileen ran the bowling league. Then Eileen was recruited to be a Cub Scout assistant den mother. “I always enjoyed working with the boys,” Eileen says. 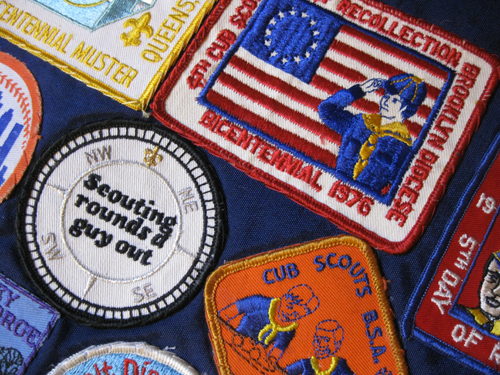 Photo by Nancy A. Ruhling
Eileen has hundreds of Boy Scout badges.

Things were good. The children grew up, and Eileen went back to work as a typist and later a computer operator. Before they knew it, George and Eileen started planning their retirement years. But it was not to be. George died in 1993 at 62.

“I just couldn’t wear my engagement ring any more,” she says. “I had it turned into a necklace that I only wear on special occasions.”

At 72, Eileen left her job to volunteer full time at Precious Blood, where she’s in the office smiling three days a week. In addition to being a Boy Scout cubmaster, Eileen’s an officer in the Rosary Society and in the Young At Heart Club. She also types up the weekly church bulletin and plays Santa dressed in a hand-me-down red velvet suit and shiny new white beard. 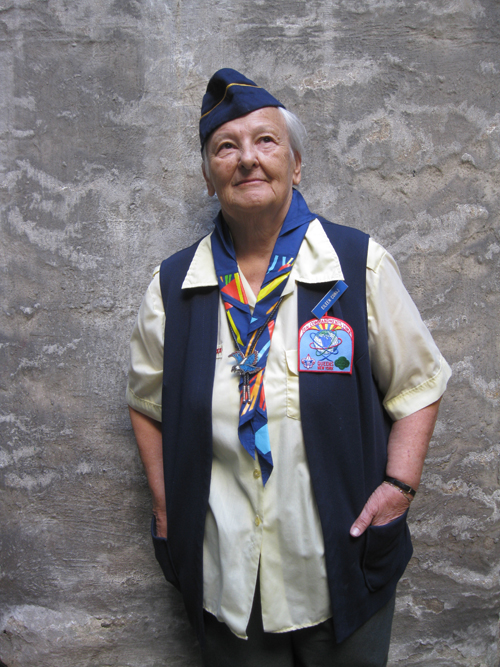 Photo by Nancy A. Ruhling
Eileen has been working with the Boy Scouts since her sons joined.

“I’m there so much it’s almost like having a full-time job,” she says, adding that meetings and events pretty much fill her out-of-office time. “I do it because it’s my parish; my parents always drilled in me the idea that you can’t take, you have to give back.”

She has taken the vows of the Cenacle Sisters — poverty, chastity and obedience — to heart.

“I’m a lay person, not a sister,” she says. “We live our vocation in the world. I live by example, by churchgoing, by learning more about spirituality, about God and about my inner self.” 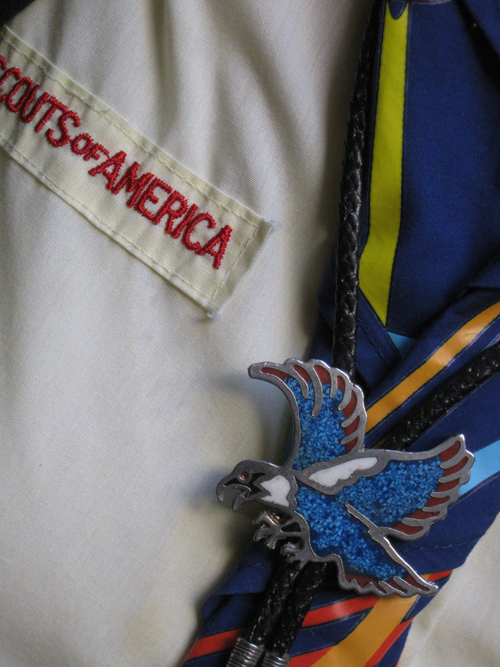 Photo by Nancy A. Ruhling
Eileen wears her uniform proudly.

She particularly enjoys working with the Cub Scouts, something she has done uninterrupted since her own sons got her involved in 1968. This year, in addition to her cubmaster duties, she’s running the Webelos Den, which puts her in charge of three active fourth-grade boys.

“I really enjoy it,” she says. “I’ve seen them grow up from first grade. It’s a joy to work with them as they mature.”

Eileen gets into her uniform — crisp yellow blouse, navy blue vest and matching military-style cap — and brings out what she calls her “brag” board, a navy blue swath of fabric that’s about 5 feet long and 3 feet wide. It’s filled with the badges she’s earned. 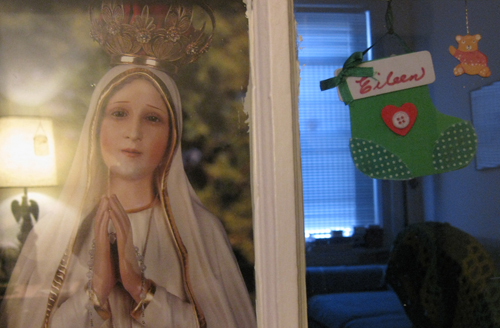 Photo by Nancy A. Ruhling
Mother Mary watches over Eileen.

The Cub Scouts go to a lot of events — they march in the St. Patrick’s Day Parade, attend Cyclones games, spend a day cleaning up parks, tour the historical society and go to camp — and Eileen’s with them every step of the way.

“I thrive working with the kids,” she says. “I feel like I’m making a difference.”

What with her church duties, Eileen doesn’t have much time for much else. Not that she minds. Ever since her knee replacement, she’s had to slow down.

She moved from the second to the first floor of her apartment building, which is within walking distance of Precious Blood. She can still drive to Exit 62 on the LIE to make the pilgrimage to the Cenacle Retreat House in Ronkonkoma, but she’s given up bowling, although when the scouts go, she does throw a few balls. Her cane, well, she saves that for the rough terrain of the scouts’ Camp Alpine. 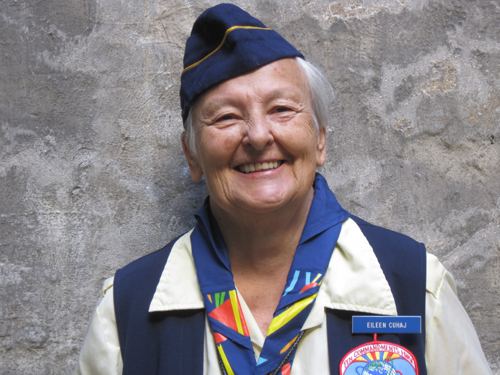 Photo by Nancy A. Ruhling
Eileen isn’t considering giving up her Scouting duties.

There will come a time, she concedes, when she’ll have to “slack off” her church work. It’s not something she likes to think about. But she has no fear; God is on her side.