To go to his job at Lenox Hill Hospital on Manhattan’s Upper East Side. To go to Coney Island for the day. To visit his parents in West Hempstead. To go to Montauk for an adventure.

“I’ve always had a bike,” says Matthew, whose friends call him Matt. “I don’t remember how old I was when I got my first two-wheeler, but I do remember that I ripped off the training wheels immediately.”

Mind you, it’s not that Matt doesn’t like public transportation; it’s just that he thinks his own mode of private transportation is so much more fun. 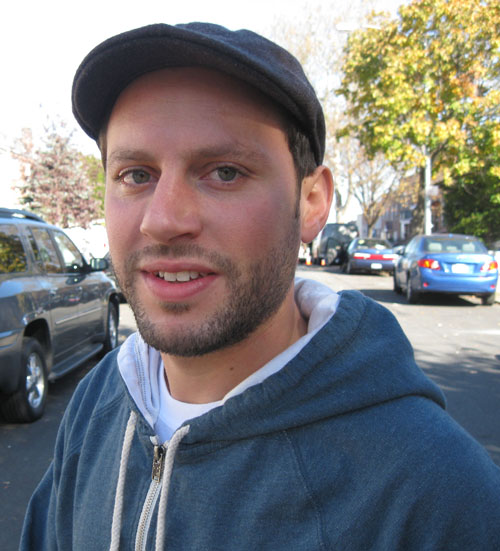 Photo by Nancy A. Ruhling
Matt, the city cyclist.

“It’s not just about getting from point A to point B,” he says. “It’s the art of riding; you are freed from everything, you can ride fast or slow.”

He’s proved his point by riding his custom Christmas-color bike through the five boroughs as well as to points on the far end of Long Island. 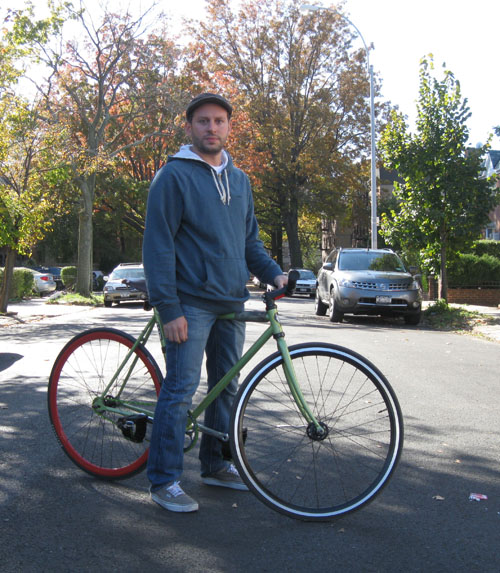 Photo by Nancy A. Ruhling
Matt prefers to put foot to pedal.

“I love the simplicity of my fixed-gear bike,” says Matt, a powerhouse with legs of steel. “It’s a whole new way of riding that goes back to the 1800s and back to the basics. There’s only one speed, and there’s no coasting, you have to continuously pedal. You’re totally in control.”

Matt isn’t one to track miles, but it’s safe to say that he pedals hundreds, perhaps thousands of them each year. The only journey he clocked was the one to Montauk last October: The 240-mile round trip took 12 ½ hours each way. 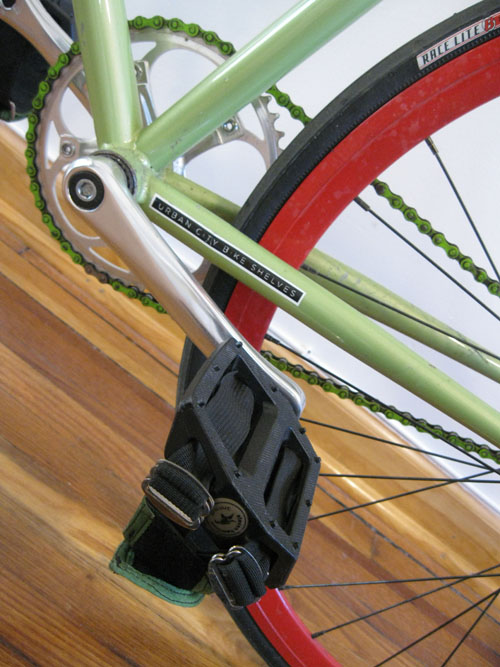 “A friend and I left at 5:30 in the morning and got there just in time to see the setting sun,” he says. “We stayed overnight in a cheap hotel. It was grueling — I almost felt like I was going to die — but it gave me a real feeling of accomplishment. I’ll never do it again — until next time.”

Matt, the younger of two brothers, grew up in West Hempstead. He was born on his mother’s birthday and is just short of 29. Besides riding his bike, he liked watching his father, Victor, make things in his woodworking shop. 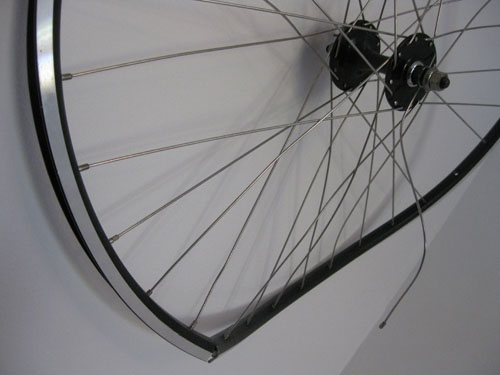 Photo by Nancy A. Ruhling
A car put a crimp in Matt’s wheel.

He didn’t feel a calling to any particular career, so he worked a variety of jobs before deciding that he wanted to be a respiratory therapist. After he graduated from Hudson Valley Community College in Troy, New York, he got the Lenox Hill job.

The move to Astoria prompted his persistent, peripatetic pedaling.

“I’ve seen everything on my own two wheels,” he says. “I’ve ridden through crummy neighborhoods where guys are brawling in the street, and I’ve rolled through places filled with the beautiful sight of families and strollers. I love the fact that I see the good and the bad and so many different cultures.” 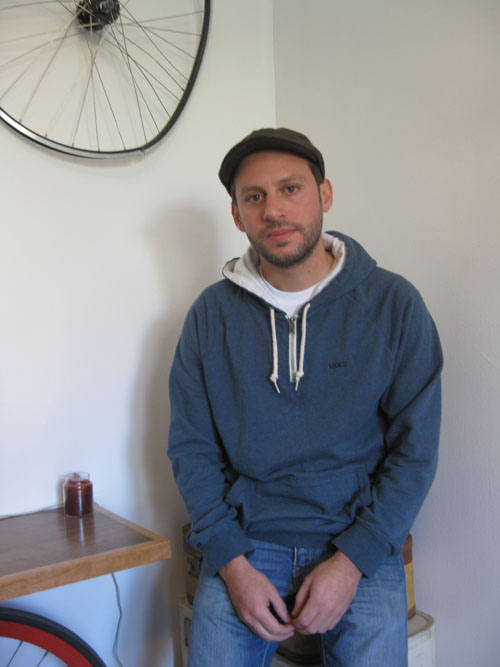 Photo by Nancy A. Ruhling
For Matt, a bicycle is a trip to freedom.

He’s also had a couple of close encounters with cars, but that hasn’t dampened his enthusiasm for his two-wheel treks. He’s never been injured, thank goodness, but his bike hasn’t always been so fortunate. A mangled wheel, its spokes sprung, hangs on his bedroom wall as a reminder of one journey not well taken.

All the riding meant that Matt had to find a place to put his bike when he wasn’t on it. Small apartments meant scant wall space, and outdoor options only tempted theft. So one day Matt got this bright idea to build a shelf to hang his bike out of harm’s and foot’s way. 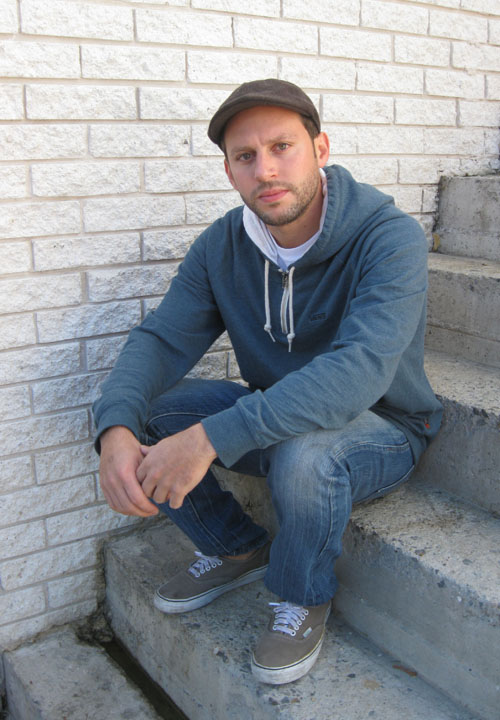 Photo by Nancy A. Ruhling
He’d rather ride.

About a year ago, he pedaled home to West Hempstead, to the same house he grew up in and the same one his father was raised in. He got his dad to translate his design into wood. 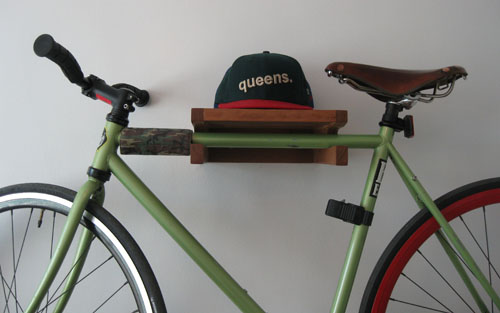 And there it might have ended except that everyone who saw the shelf wanted one. Before Matt could say fixed-gear bicycle, he had founded Urban City Bike Shelves, which has gotten orders from riders round the world.

Victor makes the shelves, and Matt applies the finishes and takes care of the packaging and mailing.

“It puts a smile on my face because people are buying what my dad makes,” Matt says. “And it gives me an opportunity to work with my dad. Someday, I want to figure out how to make them myself.” 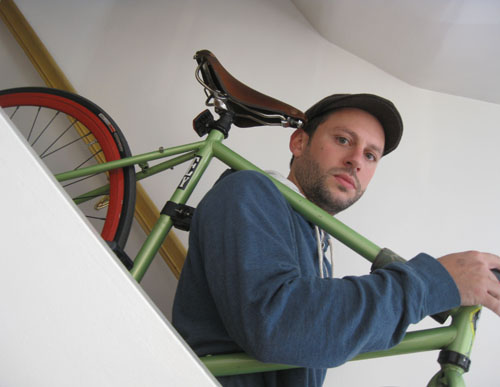 Photo by Nancy A. Ruhling
Matt is ready to hit the road pedaling.

With winter coming, Matt will be forced to become a common commuter again; even he can’t pedal through the snow and ice and the cold of night. To keep in shape, he’ll run — and watch the wheels go round and round in his mind.

He’s planning a trip to Italy; his great-grandparents came to America from Sicily. He’s been there before, but this time, he’ll be bringing his bike.