Leaning on her black-handled cane, Pearl Gould walks carefully until she finds herself safely behind the counter of Broadway Silk Store.

Bushy, a cat whose ginger fur is the same color as Pearl’s hair, says hello to her, swishing his tail within inches of a red-and-white-striped hatbox full of vintage buttons.

When she was young, Pearl used to be taller, but now she’s barely as big as the bolts of fabric she sells, and sometimes customers spot Bushy before they notice her.

A woman comes in to buy a yard of cotton ticking. She’s followed by a teenage girl who wants a 7-inch grey zipper. When Pearl is finished helping them, she makes the slow trip in her super-soft white leather sneakers to the other side of the counter, where she sits in an armchair that’s next to her purple metal walker. 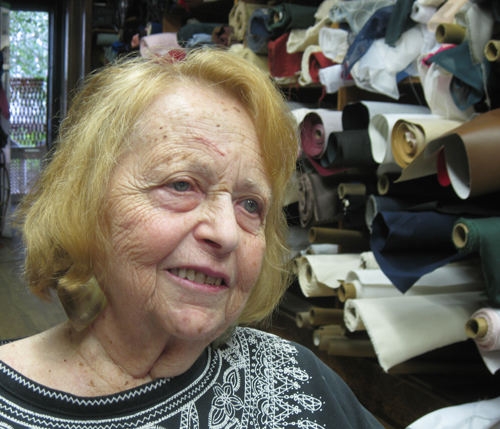 Photo by Nancy A. Ruhling
It was Pearl’s aunt and uncle who opened Broadway Silk Store.

It didn’t used to be this way. Pearl, who grew up hanging out in the shop, has been working here for decades, ever since she was a schoolgirl. She was much, much prettier then, she says. “I haven’t aged well,” she says mournfully.

This has not been her finest year. After having hip surgery, she suffered the effects of an infection. Then she fell and hit her head. And she just turned 81, a big blow she doesn’t think she’ll ever recover from. 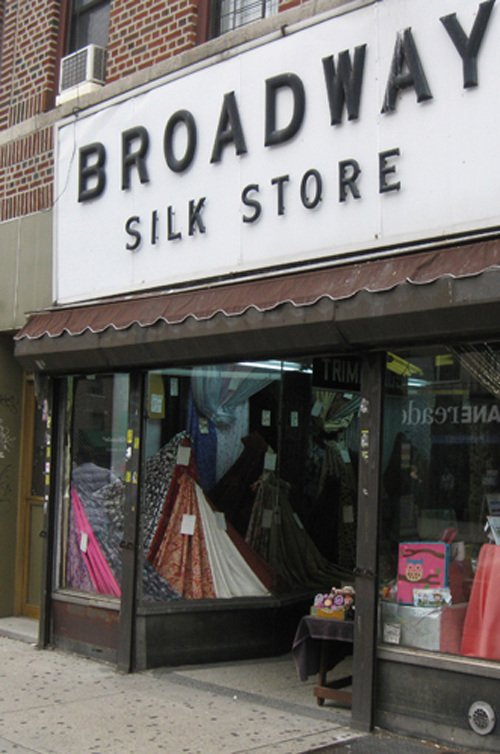 Photo by Nancy A. Ruhling
Broadway Silk Store opened in the Great Depression.

She can’t climb up to get the bolts of fabric near the ceiling, it’s difficult for her to cut the material because of her bum arm, and she’s not driving any more either. “I don’t trust my right leg,” she says. “It doesn’t listen to me.”

Her daughter, Sarah-Beth, usually is the one who does counter duty. Norman, Pearl’s husband, also helps out.

“I’m grateful that I can still come to the store and sell and talk to the customers,” Pearl says. 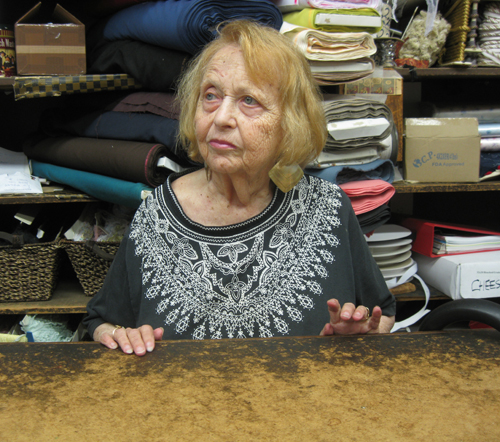 Photo by Nancy A. Ruhling
Pearl is barely visible behind the counter.

Pearl’s Uncle Elie and Aunt Esther started the Broadway Silk Store during the Great Depression, and it looks much as it did when Hoover was president. Like Pearl, it’s stitched together by time. The fabrics are stacked to the ceiling in shelves made by Uncle Elie. It was he who made the long wooden counters that Pearl measures out the material on before cutting it for customers.

“My parents were deaf, and I spent so much time with Uncle Elie and Aunt Esther that people thought I was their child,” Pearl says. 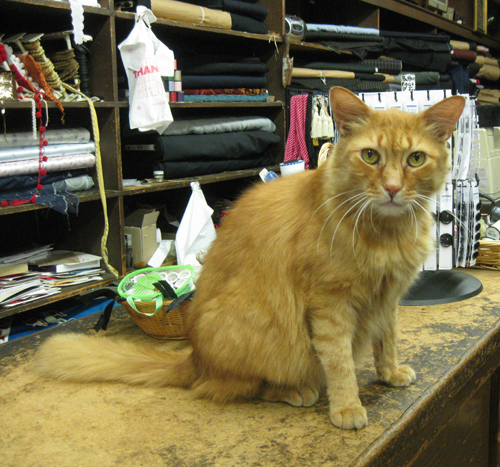 As an only child, it fell to Pearl to help her parents navigate the world of the hearing. Although her mother was able to speak, her father could only make unintelligible sounds and communicated solely through the written word.

“He worked for a milk company, and I had to go with him to talk to the big boss when things came up,” she says. “And I remember the boss once said to me, ‘For a little girl, you have a big mouth.’ And I told him, ‘I have a big mouth because I have to talk for two people.'” 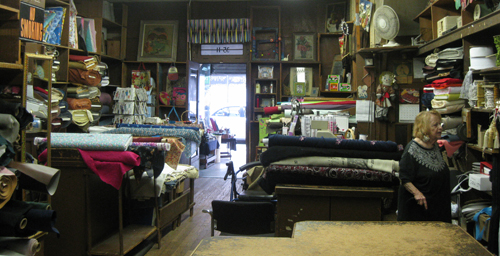 Photo by Nancy A. Ruhling
Broadway Silk Store is Astoria’s ode to the past.

Through the years, Pearl learned Yiddish, German, English, Sign Language and a special style of speech her mother concocted. She also learned to sew and to treasure the Broadway Silk Store as if it were a 24-karat gold thimble.

“I worked here several summers,” she says, “and I came here all the time.”

By her own account, she is a so-so seamstress. It was her mother who had the real talent. “She used to make all my clothes, and I used to do the fancy things,” Pearl says. “For instance, one time I embroidered the top of a suit she made me.” 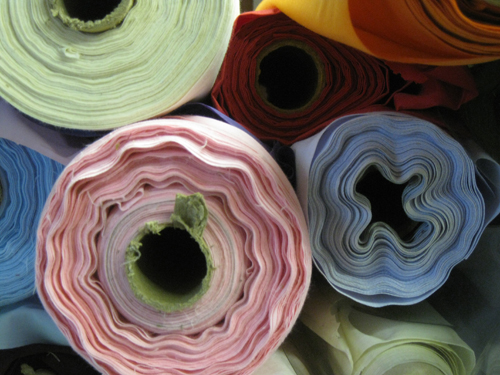 Photo by Nancy A. Ruhling
For sale: fabrics and nostalgia.

After earning a bachelor’s degree from New York University and a master’s in special education from Columbia University, Pearl taught for six years at the Lexington School for the Deaf. By this time, she had married and had two children, so when her first husband needed help running his business, she pitched in.

“I would have loved to stay at the school,” she says. “I was being groomed for an administrative position. I loved the students and still have contact with one child from my last class. I regret leaving, but I really had no choice.” 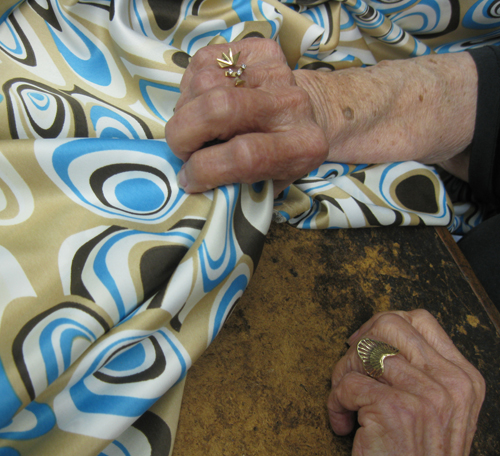 Photo by Nancy A. Ruhling
A still life still full of life.

As it turned out, she also was needed at Broadway Silk Store as Aunt Esther and Uncle Elie grew old. “It happened little by little, and then one day I became full time,” she says.

Uncle Elie died, and Pearl officially took over about a decade ago when Aunt Esther followed him to the grave at age 94. 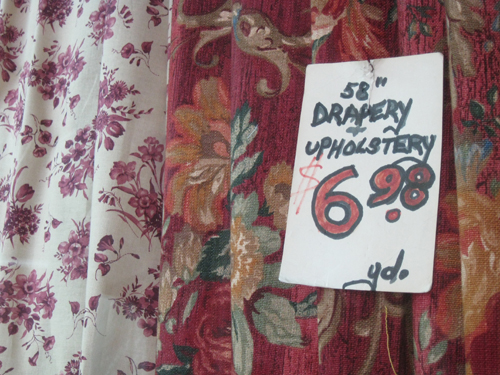 Photo by Nancy A. Ruhling
Everything, even the hand-lettered signs, is kept simple.

Pearl settles into the black chair, the one facing the shop’s front door that Aunt Esther used to sit in during her final years.

“This store has always been so much a part of my life,” she says, adding that she comes in almost every day. “Now, it’s my therapy, it’s my psychiatrist, it keeps my head going.” 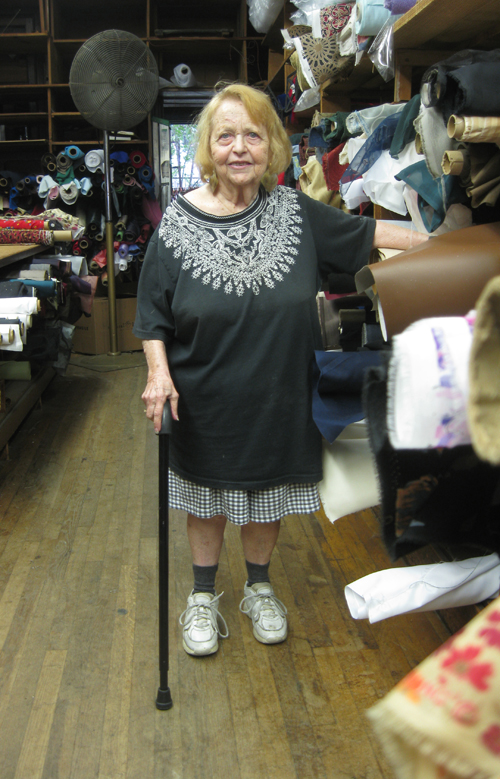 Photo by Nancy A. Ruhling
Pearl and her cane stand tall.

Right now, she’s reminiscing. Her head’s in the past, when Broadway Silk Store wasn’t the only fabric shop in the neighborhood and every little girl knew how to work a sewing machine.

“In my mind, I can still see Aunt Esther in the shop,” Pearl says. “Every time I’m here, it brings back memories.”