Berch. That’s the way the painted windows are signed.

Berch? Who is Berch?

Berch is Berch Augustine, but nobody in the neighborhood calls him that.

He’s painting palm trees on the glass doors at Tasty’s.

“A window without a painting looks naked to my naked eye,” says Berch, a lanky man wearing camouflage cargo pants and combat boots defined by Jackson Pollock drips. There’s a handful of sterling silver rings on his fingers. “I’m trying to bring fine art to these plain windows.” 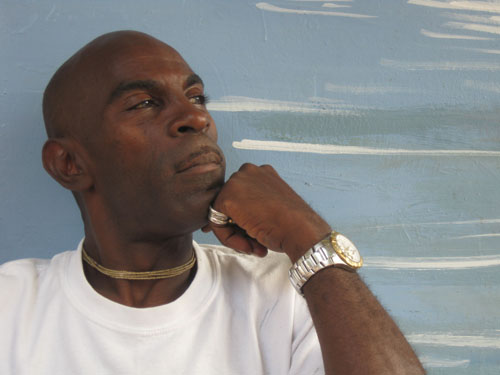 Photo by Nancy A. Ruhling
Just call him Berch.

He folds his arms across his white paint-splattered T-shirt and stands back to assess his work.

Sure, he signs his works, but you have to look hard to find the small, rotund letters that spell out his name, and you have to do some serious Scotland Yard sleuthing to find out how to find him.

“A window is a space that a lot of people don’t know what to do with,” he says. “And it’s a way to communicate with people at their own eye level.” 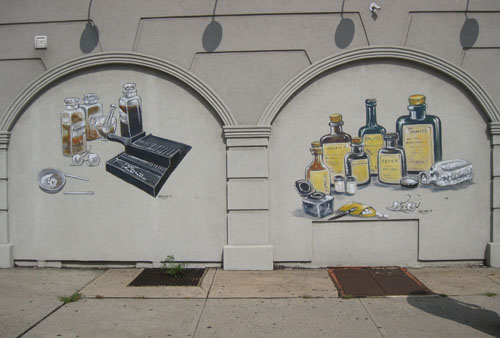 Photo by Nancy A. Ruhling
A section of Berch’s mural at Crown Chemists.

Berch found his calling as an artist when he was growing up in Trinidad and Tobago. The second oldest of nine, he “got lost in the crowd.” But things started to change when he made his first sculptures at age 5.

“I dug up dirt from the yard and created statues, that’s what my mother told me,” he says. “And after that, I was always winning draw-the-best-dog contests, and people kept telling me I had talent.”

He was 10 when his large family of meager means moved to Boston for better economic opportunities. They didn’t have much, but they made the most of it.

Berch continued making art and considered himself lucky to be attending classes at the Museum of Fine Arts, Boston and the Massachusetts College of Art and Design. After two years at each institution, he came to New York City to find fame and fortune. 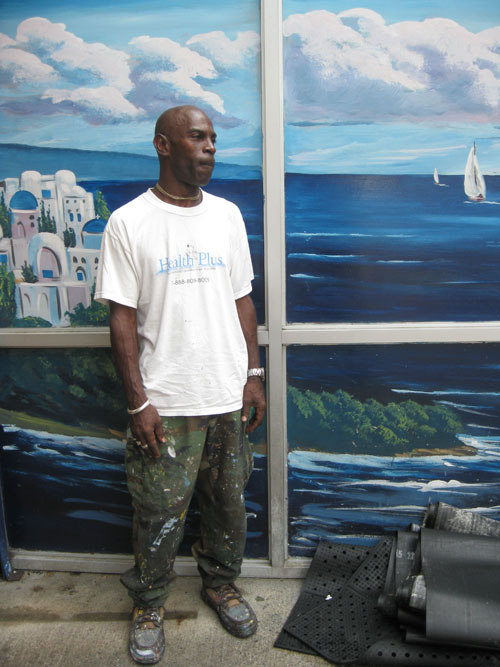 “I was a sign painter,” he says, “and one day someone asked me to draw a bagel in a window. I looked at it, and it looked so nice that I started telling people that I do windows.”

Before he knew it, he was painting windows for 100 shopkeepers in Astoria and Manhattan. Depending on the complexity of the design, Berch spends a couple of hours to a couple of days applying the semi-gloss latex enamel paint to plain panes. For the most part, he paints freehand.

“Sometimes, I sketch in the details in crayon,” he says. “I’ve been successful because I work very quickly. I have all my designs in my head.”

His designs, which start at $150, draw upon all of his favorite artists — Norman Rockwell, El Greco, Degas, Van Gogh, Michelangelo and Rubens. 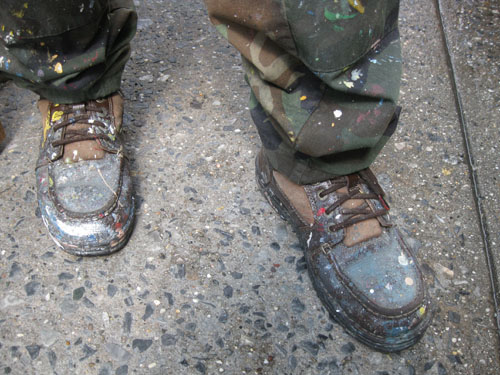 Photo by Nancy A. Ruhling
Berch’s boots by Jackson Pollock.

“Certainly, certainly, certainly, I take pleasure in what I do,” he says. “People like seeing the windows, and it makes me feel good, too. As an artist, I feel accomplished when I make people happy. I’m not doing it just for the economic end of it.”

The glass doors he painted at Taverna Kyclades, for example, make people believe they are sailing in a boat on the Mediterranean, and those beachfront palm trees at Tasty’s remind diners that even though they’re on a city sidewalk, they still need to shake the sand out of their shoes.

What would really make Berch feel really good — aside from a long vacation that he’s always too busy to take — is painting more murals like the one he did for Crown Chemists. Its arch-framed panels tell a story that unfolds like book chapters on the side of the building.

“Window art isn’t permanent,” he says. “I want to do larger works that last longer.”

Photo by Nancy A. Ruhling
In the future, Berch wants to do more permanent art.

He’d like to do more paintings, too. Of course, that would mean he’d have to take time off from work. Although two of his four children are grown, he still has two at home in Newark, and he and his wife, Patsy, just became grandparents.

Patsy has been urging him to focus on the paintings, but they agree that Berch doesn’t have any free time to pursue this now — or maybe ever.

But Berch isn’t worried. At 55, he still believes in dreams. 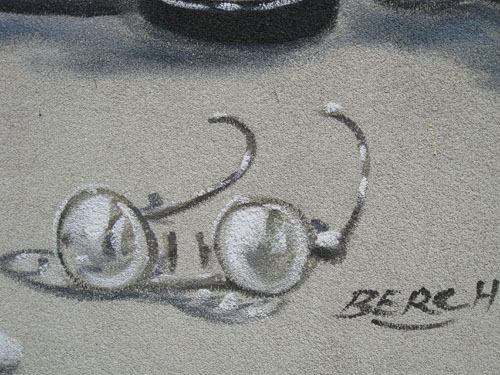 Photo by Nancy A. Ruhling
Look for the Berch signature.

“My full name’s Sidney Berchman Augustine,” he says. “It’s a big artist’s name, and when I do something big, I’m going to sign it that way.”