When Jenny Searles says hello, it sounds like a powder puff patting a pillow.

Her voice is small. And that’s what’s so shocking — it’s extraordinarily ordinary.

Ah, but when she sings! That’s when her voice box becomes a 3-D boom box, opening full throttle to soar up the scales like an American eagle in flight. In opera, you need a voice that’s bigger than life; nobody uses a microphone.

Jenny’s a soprano; her high notes sound as though they should shatter stained glass. 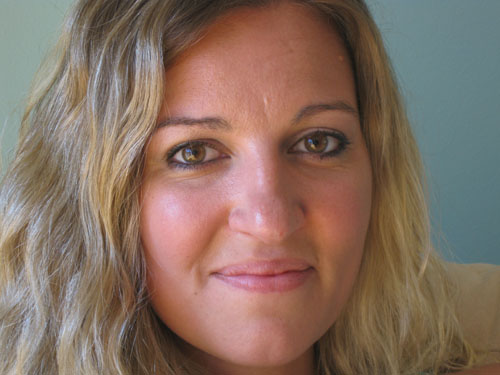 Photo by Nancy A. Ruhling
Jenny, the lady behind the big voice.
Even when she’s not on stage, Jenny, a Valkyrie whose waves of golden ringlets cascade down her shoulders, has quite a stage presence. Runway-model slim, she stands nearly six feet tall in her flat gold sandals.

“I was predestined to be an opera singer,” she says.

Not only does she have the voice, but she also has the genes to prove it. Her mother and father and even her older sister are opera singers. Growing up in Zionsville, IN, Jenny learned to play piano, violin and flute and to appreciate arias.

She and her sister used to perform with their mother, who was their vocal professor at Butler University. A decade ago, the trio performed during the Kennedy Center’s millennium series. 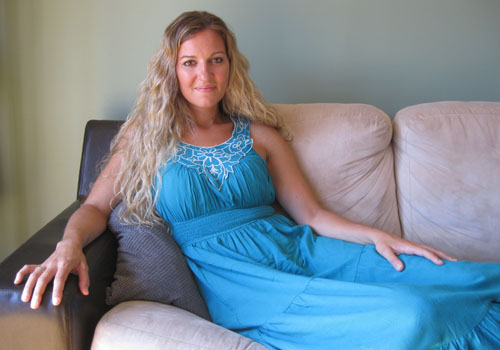 Photo by Nancy A. Ruhling
Jenny’s wish: to be a star.

Jenny studied voice for eight years and has two degrees — a bachelor’s and a master’s — plus a performer’s diploma.

“Opera is challenging and intellectual,” she says. “In addition to learning the mechanics of the voice, you have to learn music history and be fluent in French, German and Italian. You have to know how to sing, how to act, how to convey character in a foreign language many members of the audience don’t understand, and you have to know how to dissect all the great symphonies.”

You also have to be older than Jenny is to get your big break.

“It takes a while for your voice to mature,” she says. “My repertoire is similar to Rene Fleming’s. She’s 52, and she’s singing the roles of 18-year-old characters. I’m 31, and at this stage, people are starting to look at me and say, ‘Come back in 10 years.'” 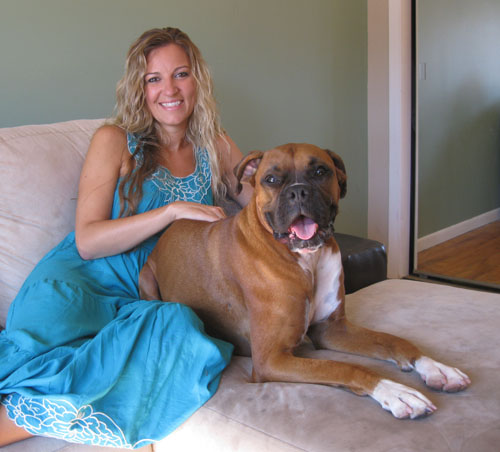 Photo by Nancy A. Ruhling
Jenny with her boxer, Ernest.

“I was naïve,” she says, adding that it only took her two seconds to make the decision. “I thought I could make this work,” she says. “I thought the path would be easier and faster.”

Up until recently, Jenny was waiting tables while she was waiting in the wings. Now, she works as a rental agent for a Manhattan real estate company. She also gives voice lessons.

This is not to say that Jenny has put her career on hold. The restaurant and real estate office put her closer to Carnegie Hall. 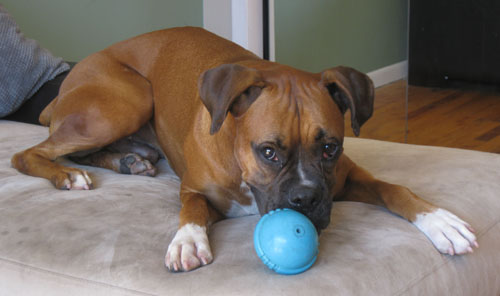 Photo by Nancy A. Ruhling
At 3, Ernest knows the importance of being.

“It’s right across the street,” she says. “It’s my motivation every day.”

The Met does have a young-artists program. And the smaller, regional companies, the ones Jenny auditions for, do take younger singers.

“A lot of them will hire you for minimal pay to do community outreach and to sing the smaller stage roles,” she says, hope in her voice. “In nine out of 10 auditions, just like all opera singers, I don’t get the job. Is rejection hard to take? Lord, yes, I do get discouraged, but I don’t let it be the end of the world.” 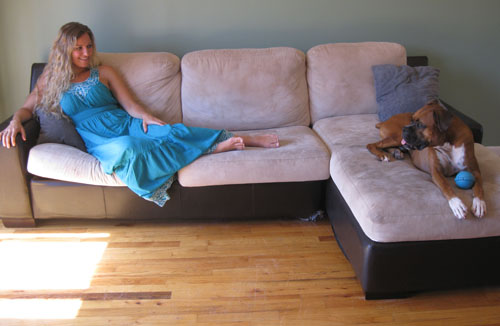 Photo by Nancy A. Ruhling
Jenny and Ernest are inseparable.

There’s more than one road to song success. That’s why Jenny’s thinking of taking the European route.

“Every small town in Europe has an opera house,” she says, “and everyone there goes to the opera. It’s not like here where it’s a freaking art form nobody understands. It’s still insanely competitive there, but they produce the type of opera I’m good at singing, and they take younger singers.”

The ultimate aim, of course, is the Met. Jenny, who is most suited for the big Puccini operas and the lighter roles in Wagner and Strauss, envisions herself playing the soprano songstress in Puccini’s Tosca. 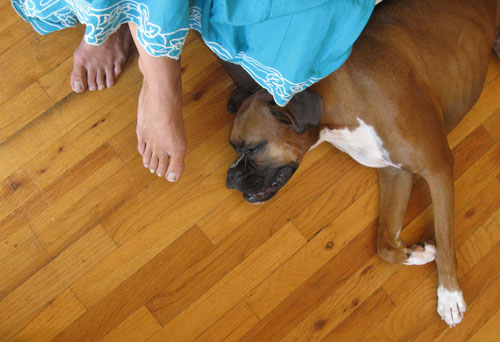 Photo by Nancy A. Ruhling
Ernest at Jenny’s feet.

“I fit the title-role character, and I look like her,” Jenny says. “The voice, the setting, the emotional, lush music fit my voice. It’s a demanding role but in a good challenging way.”

Until then, the down-to-earth diva will keep singing and taking voice lessons two to three times a week in preparation for her big break. Being the big voice on the big stage will be her ultimate happiness. 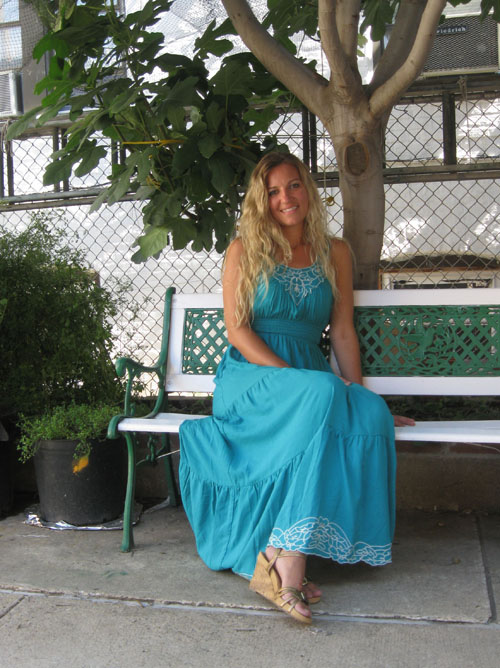 Photo by Nancy A. Ruhling
At 31, Jenny is too young for the stage.

“I can’t just walk away from this,” she says. “I need to be performing. I know I’m good enough to sing full time. People are starting to take me more seriously, but I’m realistic enough to know that it’s not going to happen in the next few years. The question is: When is my timing going to line up perfectly?”