It’s the crack of 8 a.m. when the black security gates of Tri-Boro Beverage and Ice roll up with a roar, and Carlo Caraccia unfurls the American flag.

He proudly hangs the red, white and blue by the front door that’s plastered with signs: Beware of Dog; Coors Light Mardi Gras and Blue Moon.

Guinness, a horse of a Great Dane who’s the color of a Halloween midnight, bounds out as the first customers pull up to the ramp with their empty coolers.

Beware of Dog? Carlo laughs. The sign doesn’t refer to Guinness, heavens no; why if Guinness knew what it said, it would scare him to death. 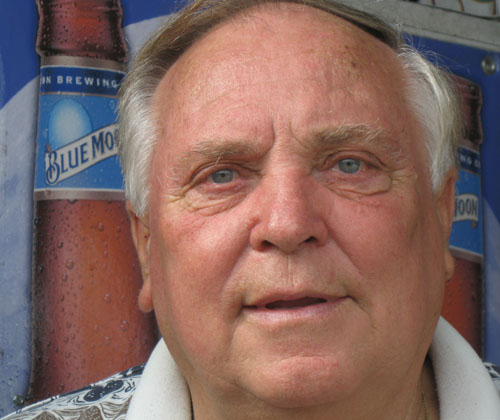 Photo by Nancy A. Ruhling
Carlo, the ice man.

At the first lull, Carlo, a short, rock-solid man with eyes the color of cornflowers, heads back to his command center for a cup of coffee. The walls are lined with empty beer cans, some of them more aged than fine wine.

It is here, in an ancient red-leatherette barstool next to Guinness’ wooden-box bed, that he spends most of his days.

Carlo, a Beck’s man, and Tri-Boro Beverage are bosom buddies. The city’s oldest cash-and-carry ice, dry ice, soda and beer house was established by his grandfather in 1935, when trucks delivered blocks of ice to homes to put in ice boxes. Carlo was born seven years later and started working here when he was just shy of 17. 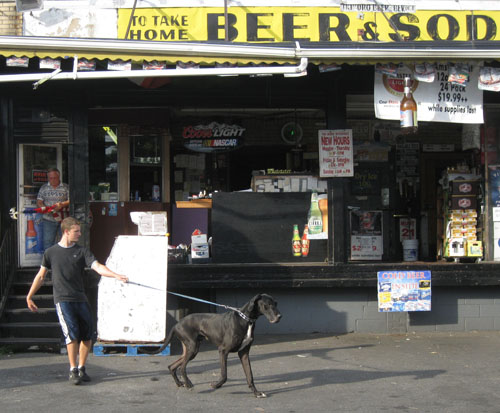 Photo by Nancy A. Ruhling
Tri-Boro Beverage and Ice gets cooler-ready.

He would have joined Tri-Boro when he was still drinking milk from a bottle, but he was born in Italy and didn’t make it to America until 1958.

“Straight from the boat, I started cleaning bottles at Tri-Boro,” he says. “It was the only job I could do at the store because I didn’t speak any English.”

Eight, 10, 12 hours per day, six, seven days a week, Carlo toiled at Tri-Boro. “I wanted to go back to Italy because everything was strange,” he says, “but my family was here, so you do what you gotta do.” 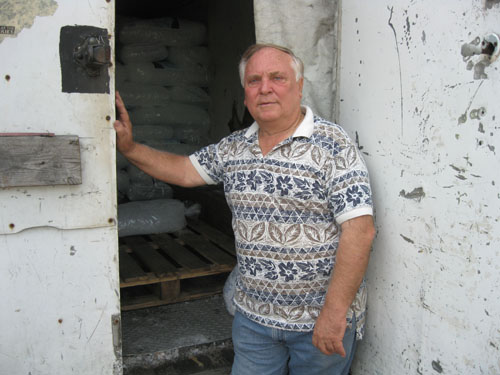 Photo by Nancy A. Ruhling
Carlo outside the freezer room.

It was while he was working so hard that he noticed a very pretty girl. Every day, she walked by the store, and on one of those days, Carlo decided to speak to her. Janet and Carlo quickly became friends and more slowly became husband and wife.

Through the years, they had six children — four daughters and two sons. Carlo Jr., their younger son, runs the business with his father. 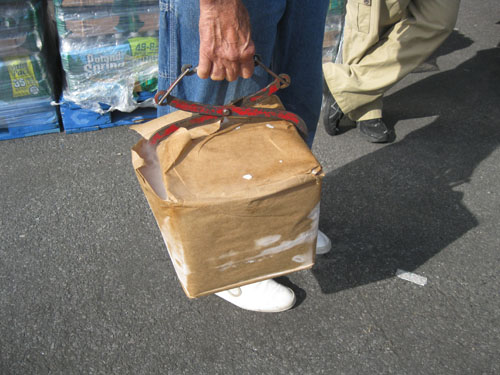 Photo by Nancy A. Ruhling
Antique tongs are used to carry blocks of dry ice.

“I hang out here and do whatever needs to be done,” Carlo says. “It’s exciting because I get to deal with people every day. Some of them know me from 50 years ago. That’s how long they have been coming. And after a while, some of them become my friends.”

A longtime customer stops in to shoot the breeze with Carlo. He’s even more of an old-timer than Carlo: He and Tri-Boro go back to 1945!

“I remember stealing your grandfather’s ice tongs so I could take the ice home to my mother,” he says. “Of course, I eventually gave them back.” 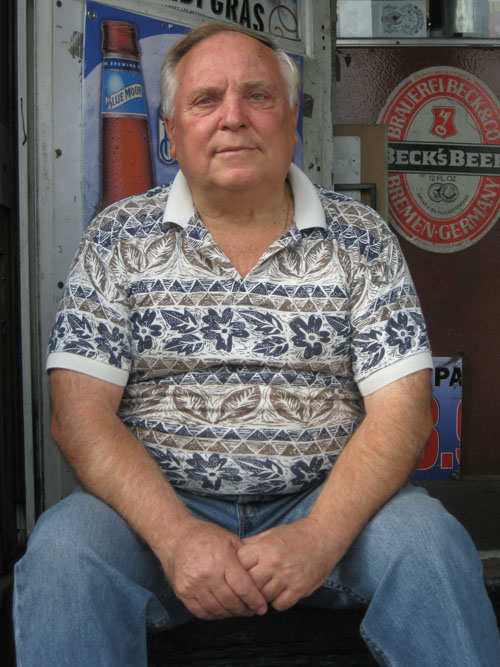 Photo by Nancy A. Ruhling
Carlo joined Tri-Boro when he was almost 17.

Tri-Boro hasn’t changed much since it moved into this building in 1939. Carlo opens one of the thick, time-worn wooden doors to the ice box, where shiny silver kegs and cardboard boxes of beer are stacked to the ceiling. Bags of ice are stored in a separate freezer room.

A customer wants some dry ice, so Carlo takes a pair of antique tongs and weighs a block of the smoking stuff on a vintage scale.

As he’s doing this, people with plastic trash bags bulging with empties line up at the recycling machines. 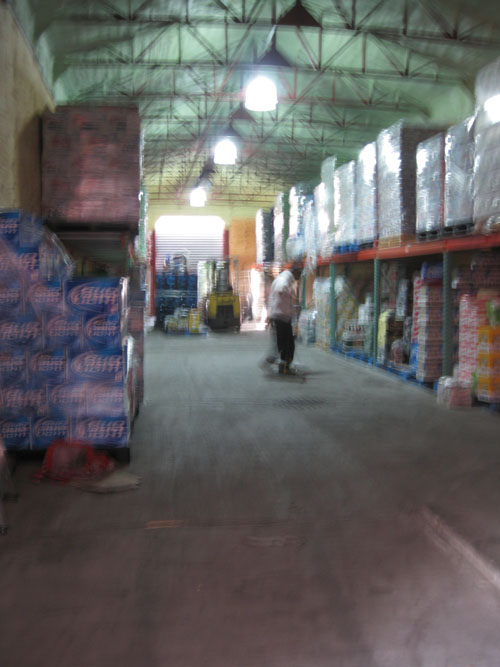 “Like any business, there have been good times and bad times, but I’ve made a good living at this,” Carlo says. “And I hope my son can, too.”

Carlo Jr. recently turned part of the building into a fancy micro-beer retail shop, which his father thinks is a slam-bang idea.

Before we get carried away, let’s make this perfectly clear: Carlo may be 69, but he has no intention of retiring. To be precise, he’s semi-retired, which means he gets to spend his winters in Florida doing some light betting on the ponies and dropping pennies at the casinos. 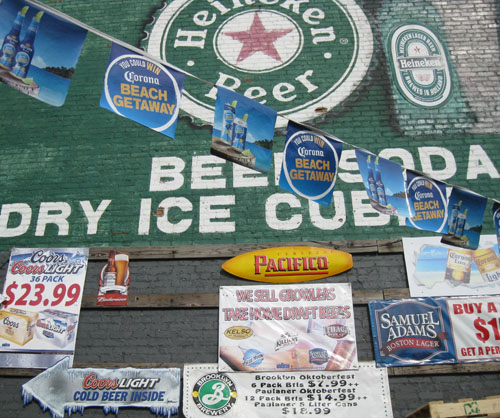 Photo by Nancy A. Ruhling
The side of the building serves as Tri-Boro’s billboard. 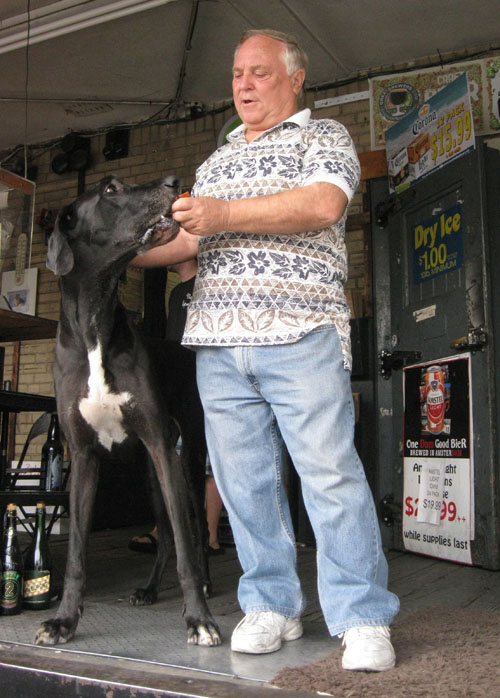 Photo by Nancy A. Ruhling
Guinness and Carlo man the pickup ramp.

Carlo, Guinness at his side, goes to the ramp to fill yet another order. The big dog startles the customer, who jumps back in horror.

To prove it, Guinness emits an earth-shattering bark.