Maria, whose pixie-cut hair is the color of a shiny new penny, is Hobbit-high, so when she opens the wooden gate that towers over her, it is indeed a magical act.

In her back yard, there’s a thicket of bamboo, a plot of Russian sunflowers and a crop of corn. In one corner, there’s a gingerbread-style play house that looks as though it ran away from Hansel and Gretel. Next to it are a green-plastic tike table and an ocean-blue kiddie pool as round as the Earth. 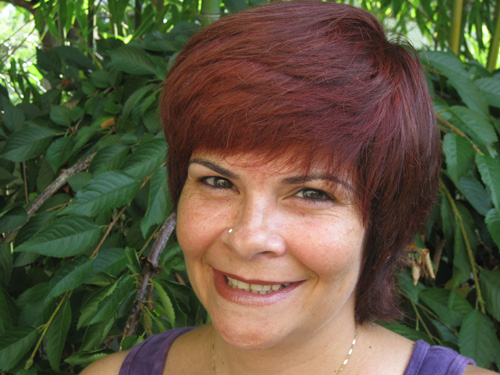 Photo by Nancy A. Ruhling
Maria smiles at her bright future.

Where are the fairies? Ah, you have to be a true believer to see them. The only one in evidence is on Maria’s purple tank top. But Maria does believe in them, and we can see Maria, so that’s enough for now.

“You have to believe in something, especially in the times we live in,” she says. “If you don’t expose yourself to different things, you end up walking through life blindfolded.”

Maria believes in a lot of other things, too: holistic medicine, organic foods, spirituality and mysteries.

“My mother, who was quite the spiritual wise one, raised my three sisters and me with homeopathic remedies,” Maria says. “She cooked all our meals from scratch.”

Maria’s working-class family moved from New Jersey to Astoria when she was 6. 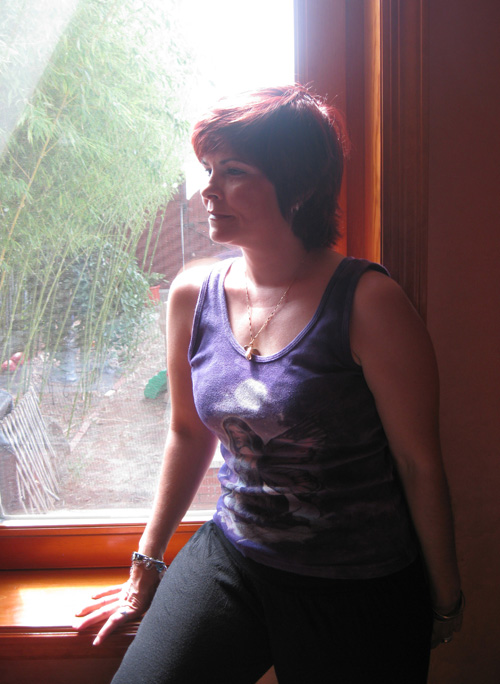 Photo by Nancy A. Ruhling
Maria is embracing change.

“Everything was decorated for Christmas,” she says. “It was a heartwarming moment. I remember getting off the subway at Broadway and smelling the bread at Parisi Bakery and seeing the softly falling snow. It was the most amazing feeling coming to a new place.”

She did not, however, live an idyllic or idle life. When she was in high school, she got her first job, as a legal secretary, through a work-study program.

“Unlike my older sisters, I was very career-oriented,” she says. “And I was a free spirit.”

She spread her wings only to have them clipped when her mother died shortly before her 20th birthday. “My sisters were married, and everyone was living in Florida,” she says. “I had to work to pay the bills.”

She got married in 1991, to Peter Anthony Melendez III, and 16 years ago, she became the formidable legal administrator/paralegal for Vallone & Vallone. 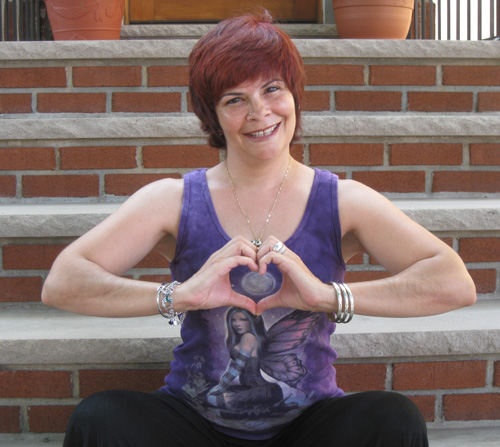 Photo by Nancy A. Ruhling
A happy face and a happy pose.

Don’t let that stuff about fairies fool you.

In the office, Maria, efficient and expedient to a fault, is a force to be reckoned with. The slogan “let’s compromise; we’ll do it my way” dominates her desk, which is the nerve center of her operations.

“I tell it like it is whether you like it or not,” she says. “I’m passionate about the things I believe in, and I’m stubborn; sometimes words come out prior to my thinking. I have a strong personality.”

If you don’t like it that Maria’s one tough cookie, well you can go eat crumb cake.

“I suppose people don’t like the truth or being called out or letting them know you’re not going to take their shit,” she says. “They get all bent out of shape, and right away, you’re a bitch. A bull doesn’t charge unless provoked, right? So look at it that way. I’m a Taurus!” 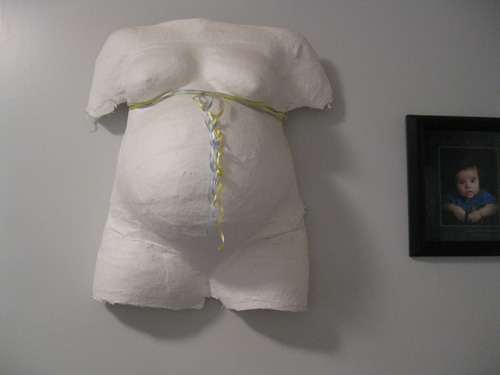 Photo by Nancy A. Ruhing
The body cast Maria had made during her pregnancy.

Maria’s wonderful life stayed the course until 2004, when she lost her first baby early in her pregnancy.

“I was so depressed, I gutted my house to renovate it and lived in the basement,” she says. “I even left my job for six months.”

Without much conscious effort, things started to change. “The universe shifted me on the path of new beginnings,” Maria says.

She got pregnant again, at age 40. “I got rid of the stress in my life, and I laughed my butt off,” she says. “I was the fattest buddah you ever saw. I was so big people thought I was having twins or triplets.” 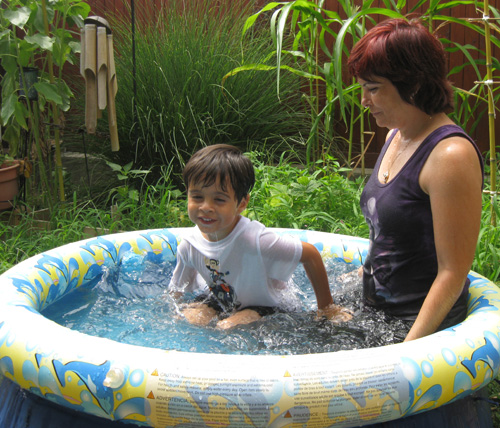 Photo by Nancy A. Ruhling
A giggle and a splash in the swimming pool.

“I want to do something where I’m instrumental in helping others,” she says. “I knew motherhood would change me, but I didn’t realize how much.”

Maria doesn’t know what she’ll end up doing, but she does know that she’ll be leaving Vallone & Vallone by the end of the year. The office is downsizing, and she is wholeheartedly embracing the opportunity to change careers.

“They’ve been very good to me,” she says. “I’ve been blessed to have known that family.”

She envisions setting up her own holistic wellness practice and spending more time with Peter Anthony. Right now, she and her husband play tag-team with him, setting up their work schedules to accommodate him. Every Sunday is father-son day; and every Monday, Maria’s day off, is mom-son day. 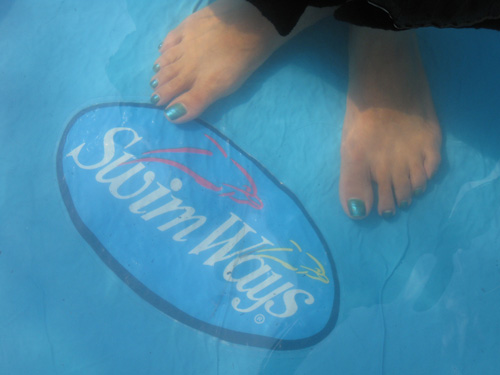 Photo by Nancy A. Ruhling
Maria’s feet are firmly grounded in water.

“We home cook all of our meals,” she says. “When I say we, I mean my husband and son, too. When we’re all in the kitchen, it’s a family love affair — and total chaos.”

During 2011, Maria’s Year of You, Maria is allowing herself to dream big. The future, she knows, is hers to seize.

“There are so many things I want to do,” she says. “I’d love to take Peter on an African safari, where we’d wake up to see a giraffe at our window.” 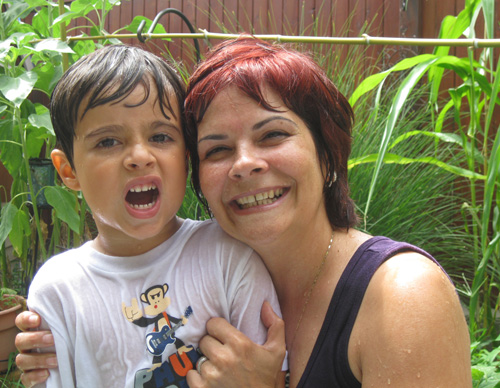 “It is created to empower women to let go and reintroduce the goddess in them,” Maria says.

She’s using the empowerment in her own life, too, trying out new things, including writing a children’s book. The story, of course, will give Peter Anthony a starring role.

Speaking of Peter Anthony, he’s just come home from a field trip and is eager to play outside.
Maria hasn’t planned to go into the pool, but when Peter Anthony jumps right in, clothes and all, she follows.

He splashes his mommy. Soaking wet, she laughs at the unexpected turn the day has taken.