His 4-year-old daughter, the so-called Lady S, is looking down on him, longingly, from the second-floor bedroom window. 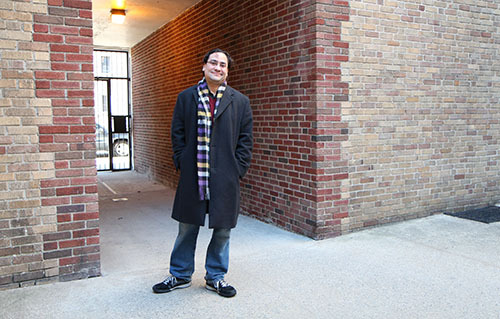 Photo by Nancy A. Ruhling
David, serious for a second.

She’s dying to be outside with him, but she’s suffering from the sniffles, so he’s making funny faces to make up for her sequestration.

He sticks out his tongue, flies his fingers from his nose like a bird and bulges his big brown eyes until they nearly pop through his wire-rim glasses.

Her smile, which comes swiftly, eggs him on. 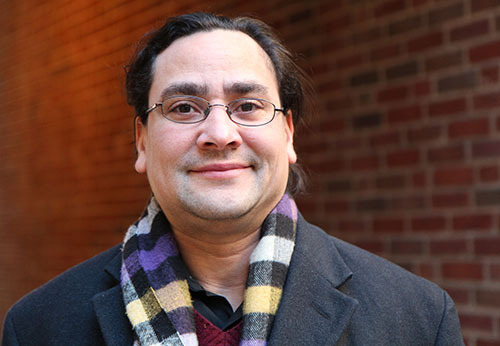 Photo by Nancy A. Ruhling
David’s an actor/juggler/clown/real estate agent.

He’d juggle, but there’s nothing in the pockets of his grown-up grey overcoat that he can toss into the air.

All he needs is three of something, anything.

You don’t happen to have any torches or knives or balls, do you?

David, who bills himself as an actor/juggler/clown/real estate agent, has playfully spent his adult life keeping everything up in the air. 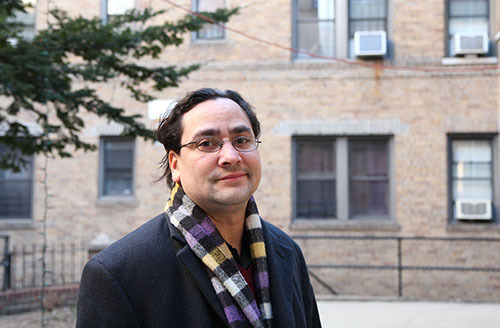 Photo by Nancy A. Ruhling
For a long time, he played a waiter.

The tangible objects are such as cinch that he doesn’t spend time practicing with them any more.

It’s the other things, like his careers and family life, that have proven to be a bit trickier.

David, who grew up in Washington, D.C., got a rather late start for a kid who became stage struck watching his older brother and sister perform in school plays. 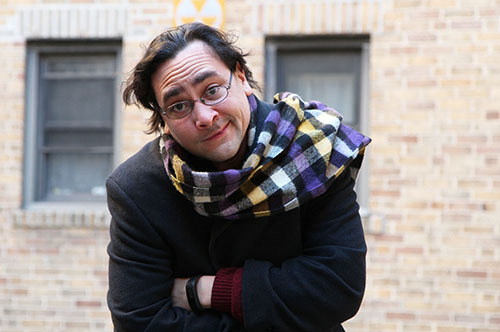 Photo by Nancy A. Ruhling
He’s a expert juggler — on and off stage.

He didn’t learn to juggle until he was in seventh grade and didn’t take part in any school productions until he portrayed Antonio and the Sea Captain in Shakespeare’s Twelfth Night at age 14.

“I was shy, and I also had dyslexia, so I was great at math but not English,” he says. “I found performing to be fun. It was like play for me.”

When he graduated from Oberlin College in Ohio with a double major in math and theatre, he was all prepared to take a sit-in-the-office suit-and-tie job. 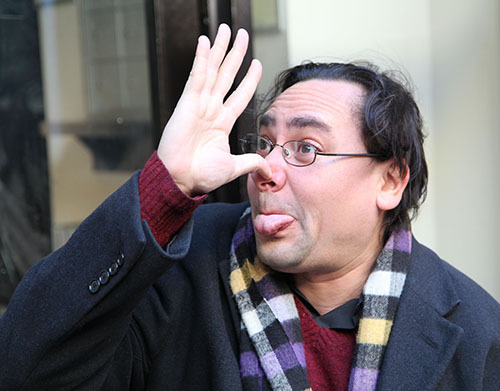 Photo by Nancy A. Ruhling
Making a funny face for Lady S.

“I went to 11 interviews for companies around the country but didn’t get a single job offer,” he says. “So I went to three theatre auditions and got every one.”

Those gigs kept him in Cleveland, where he performed a variety of acting roles. He did so well, in fact, that in 2002, he came to New York City.

“I had dreams of being a professional Shakespearean actor,” he says. “But I was like a big fish swimming into the ocean.”

He never got to say “to be or not to be” on stage, but he did get to be a clown on a cruise ship, which is where he perfected his juggling, stilt walking and other stupendous stunts that include popping balloons with a bullwhip while blindfolded and escaping from a straitjacket while keeping the audience sewn up in stitches.

When that gig ended, he played a longtime real-life role as a waiter who auditioned in his spare time and sometimes even got parts.

It wasn’t until he got married that he started some serious re-juggling. 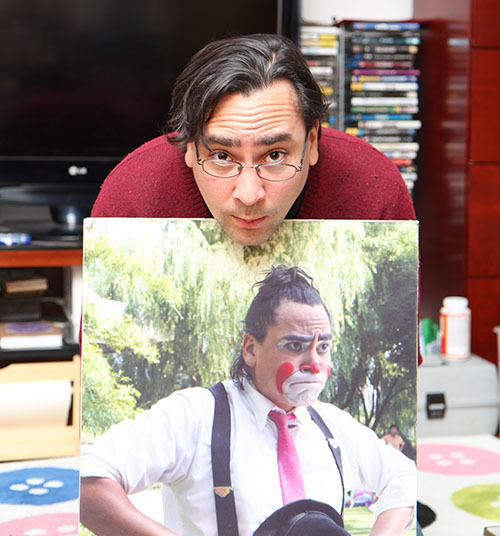 Photo by Nancy A. Ruhling
David acting out with Dusty.

He and Gina Verdi, a part-time teacher and former stage manager, had been friends since his days in Cleveland, and when she moved to Astoria, their relationship deepened.

“I had tried to date her before, but she said no,” David says. “We cut our wedding cake with a juggler’s knife she gave me that she had engraved with the words ‘Yes Dear, you were right. I DO love you.'”

After a nearly yearlong stint as a stay-at-home-dad, David joined a group of other performers at Bohemia Realty Group in Manhattan, which was founded by Sarah Saltzberg, a star of the Tony-award winning Broadway musical The 25th Annual Putnam County Spelling Bee.

“It’s the perfect blend,” he says. “Each showing is a little performance. You’re not only selling apartments, you’re selling yourself.” 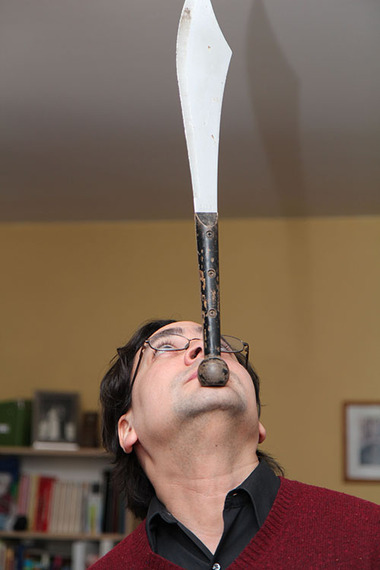 For the last several years, for instance, Dusty’s been a stilt walker in the Macy’s Thanksgiving Day Parade, a feat that Lady S looks forward to watching on TV.

David and Dusty, who also do magic tricks, have several projects in the works.

“I’m realistic about this,” David says. “Unless you’re a really big star, you don’t make enough money to perform full time. Real estate will always be my parallel career.”

As Lady S stares wide-eyed, he casually balances a shiny, scary-sharp knife on the tip of his dimpled chin.