It’s time for Jose Morales to put on his happy face. He pulls up two straight-back chairs and sets them in front of a 4-foot-high dime store mirror in the living room/kitchen of his thimble-sized apartment.

He places a plastic fishing tackle box on one of them. He opens it, revealing an accordion of shelves that are filled with makeup.

Even without the greasepaint and powder, Jose smiles. He can’t help himself because in the circus of life, he’s a clown. 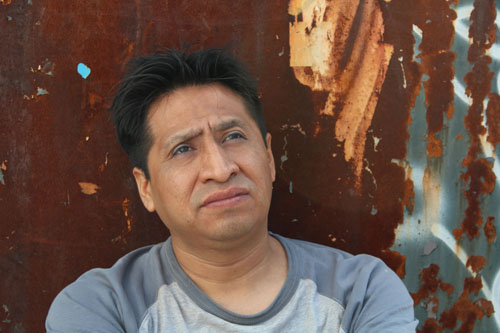 Photo by Nancy A. Ruhling
Jose in a serious mood.

It’ll take him 20 to 40 minutes to transform himself from an ordinary guy with raven hair into the fantastically flamboyant Payaso Cascarita, a Rudolph-nosed clown with clodhoppers and a big blue bow tie.

He starts with the greasepaint — white, red and black.

Jose, who is 42, was born in Izucar, a city in Mexico’s Puebla State. He’s the second of four brothers who were raised by a single mom who couldn’t give them much more than her love.

Jose had big plans for his future. He saw himself as a lawyer, but he only got as far as high school.

“College in Mexico is free, but you still have to pay your expenses,” he says. “And I didn’t have the money to travel to the city to go to classes or to live there.” 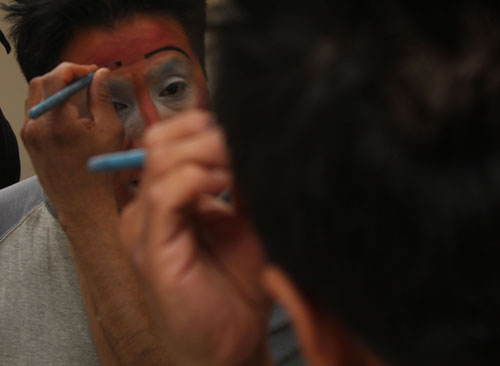 Photo by Nancy A. Ruhling
The transformation begins.

So he got married and began selling wallets and belts on the street.

When his mother came to New York to provide a better life for her sons, Jose decided to follow her. He had everything all planned out; he would work really hard to make it big so he could send for his wife and infant son.

He didn’t speak so much as a sentence of English, but he got a job working in a factory that sold frozen food. Eventually, he became a manager and welcomed a daughter into his family.

“I was growing in the company,” he says. “They paid me to go to school to learn the language and sent me to business classes.”

Jose picks up a big powder puff and heads to the bathroom. Pat, pat, pat, plumes of pancake powder cover his face, pat, pat, pat, he dabs water over the powder to hold the makeup in place. 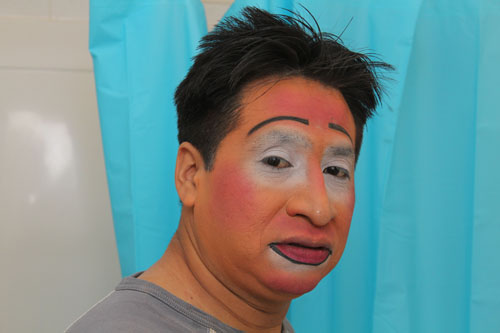 Photo by Nancy A. Ruhling
Jose in the middle of his makeup makeover.

Yessiree, Jose considered himself one lucky fellow: He was on his way. But right after 9/11, when the world was turning upside down, his smile turned to a frown.

He delivered dishwashers, he sold coffee in a pushcart, he worked in a restaurant. 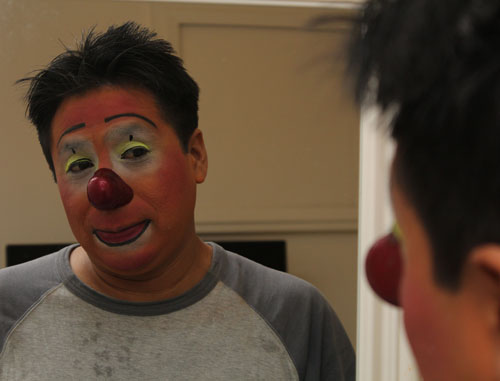 Photo by Nancy A. Ruhling
The nose makes Jose’s clown.

One day, he decided to splurge. He spent 50 cents on a newspaper so he could look over the help-wanted ads, and one caught his eye. A party company was looking for a clown.

“I thought that maybe I could do that,'” he says. “I know how to talk to people, and I like kids. They were looking for someone with experience, but they hired me as a driver to the clowns instead.”

He reaches for the neon yellow eye shadow.

Then one day, a clown didn’t show up for a party, and Jose filled in.

“They sent me to classes in face painting, balloon twisting and magic,” he says. “I had to buy my own props and costume. I only had $120, and I used it all. I didn’t tell my wife or children about the money or the job. I was afraid they would be ashamed of me.” 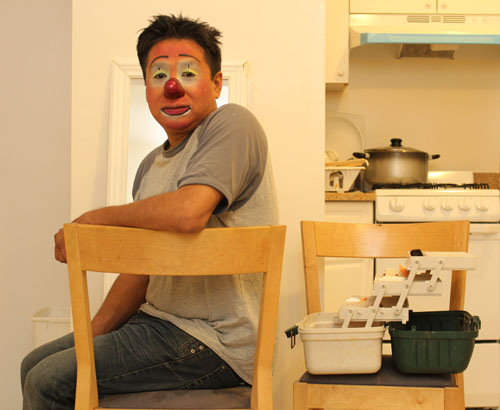 Photo by Nancy A. Ruhling
Being a clown is a lot of hard work and little glamour.

Jose was psyched, but he sucked.

“The party was in Bay Shore at the end of Long Island,” he says. “I’d never driven outside of the city, I didn’t have GPS, and the lady she told me that I wasn’t a clown, and she wasn’t going to pay me. I was so sad that I was crying. I thought the company would fire me.”

But he didn’t give up. Instead, he watched a clown video 40 times, mimicking every move until he got everything right.

“I got so good that people started giving me tips and asking for my business card,” he says. “Three months after I started, I went out on my own.”

He puts on some eyeliner, subjects his lashes to a metal curler that looks like an instrument of torture and applies mascara. 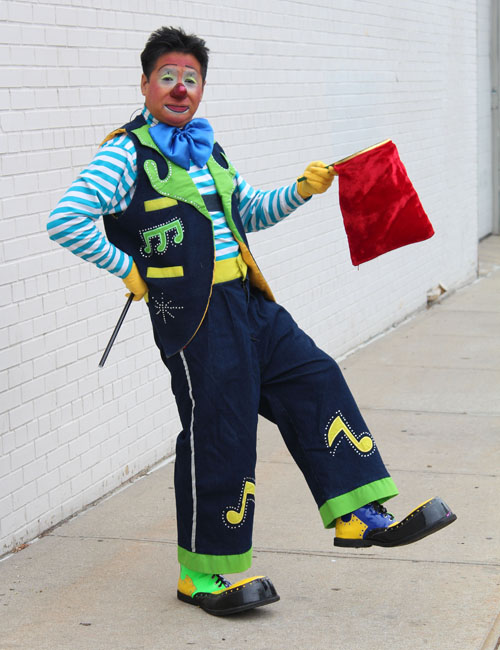 Photo by Nancy A. Ruhling
As Payaso Cascarita, Jose is all smiles.

Eventually, he got a steady job managing a warehouse, but he never stopped clowning around.

“I got so many calls to do parties during my shift that I got fired from the warehouse,” he says.
“Instead of being mad, I was happy. I didn’t feel hopeless. I felt free.”

Jose puts on his big red Ping-Pong ball nose, gluing it in place.

Finally, he told his wife what he had done; she thought he was crazy. 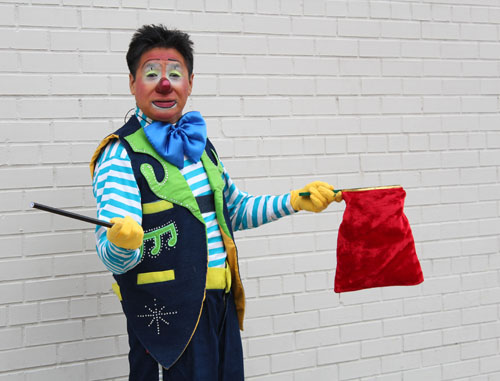 Photo by Nancy A. Ruhling
Keep your eye on the magic wand.

“She wanted to know why I did it,” he says. “But she supported me. She took me to the second-hand shop to get me a better costume. My kids were another matter. They were teenagers. They didn’t want their friends to know.”

As Payaso Cascarita, Jose does three to five parties a week, filling in his income gaps by selling the clown costumes he brings back from Mexico to his peers. 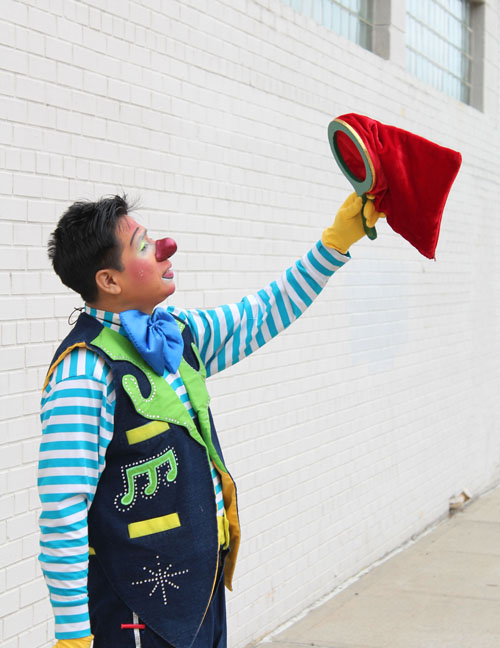 Photo by Nancy A. Ruhling
Go ahead, smile!

“I can make a living doing this,” he says.

It would be great to say that everything in Jose’s life is sunshine, but it isn’t. He and his wife split last year — she and their 18-year-old daughter are living in East Elmhurst, and Jose and his son share the Astoria apartment. 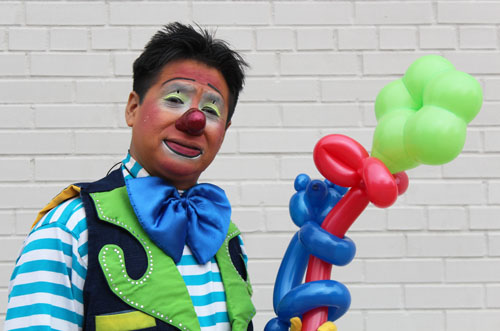 Photo by Nancy A. Ruhling
As Payaso, Jose sees life as one big party.

He dons his colorful, clashing costume and puts the bow tie around his neck and, poof! Jose disappears.

“I love being a clown,” Payaso Cascarita says. “I hope I’m still doing this at 90. Being a clown is part of my life. I’m a different person.”

He gives himself one last look in the mirror then laces up his elephantine shoes and waddles out to his van. He can’t wait to hear someone laugh at his expense.