First things first. The chickens need to be fed. Rob McGrath heads past his crops to the chain-link coop he just built in his back yard. When he scatters the feed on the ground, the six clucking hens — four Red Stars, two Leghorns — huddle around him like football players.

“I just love being with the chickens,” he says, gathering one of the Red Stars in his arms and cradling it like a newborn. “I can watch them for hours.”

Rob’s new at this farming stuff, and he’s green in every sense of the word. This is the first season that Hellgate Farm, his experimental, sustainable enterprise, has been fully up and running, and it’s been quite an adventure. (More photos.) 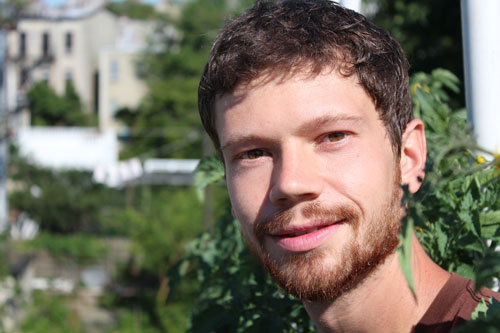 Photo by Nancy A. Ruhling
Rob, the urban farmer.

Three years ago, when Rob bought the property — a four-unit apartment building, plus a detached two-story, four-bedroom space out back — he was more interested in green design than collard greens. At the time, he was betting that it would be a viable investment that would beat the beat-up stock market.

He’s an engineer — he got his degree from Virginia Polytechnic Institute and State University — and up until recently was a construction project manager for the New York City parks department. When he started to make improvements, his green side kicked in full swing. 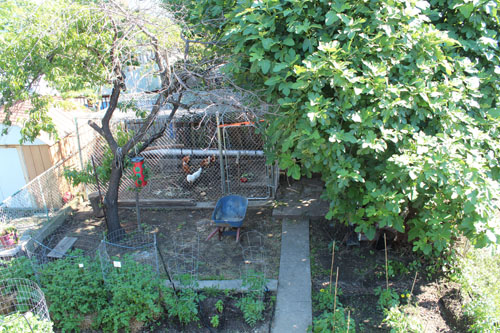 Photo by Nancy A. Ruhling
Hellgate Farm, aka Rob’s back yard.

“I had always wanted to build green spaces ever since college, when I took a class on sustainable cities,” the 27-year-old Rob says.

He used a lot recycled materials for the project and did much of the work himself, relying on advice and help from a dozen or so green-movement friends. 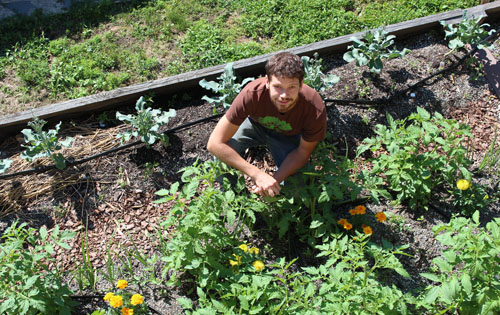 Photo by Nancy A. Ruhling
Rob on one of his roof gardens, where crops stretch toward the sky.

Rob, tall and rail-thin like a teenager, grew up in upstate Endicott, a village with a population that wouldn’t even fill one-third of Citi Field. When he moved to Brooklyn to bunk with his brother, he spent three months making the rounds of the green-events circuit.

When he got the opportunity to buy his property, he set out to put some of his sustainable principles into planning and planting.

“The green housing projects that I knew about in Manhattan were only for super-rich people who ate organic food,” he says. “But I wanted to do something similar for middle-class people and low-income people.” 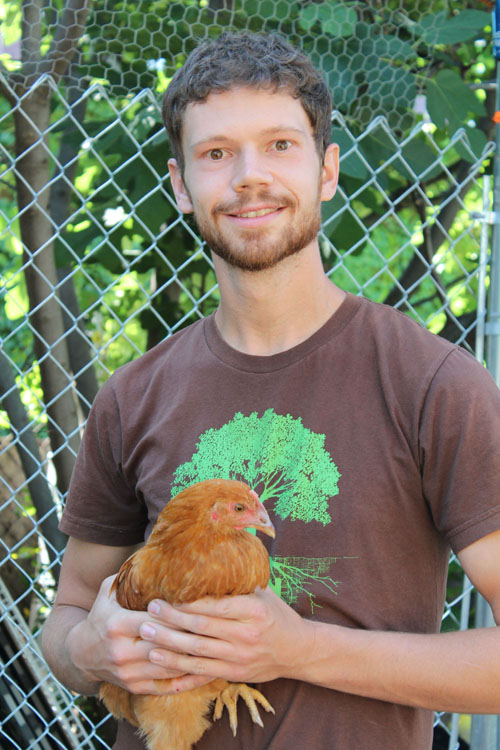 Photo by Nancy A. Ruhling
Rob, and just his chicken, down on the farm.

Rob started small. He made the detached house his own and after shoring up the aging, first-floor roof, turned it into a garden, complete with a very buzzy and busy beehive. He filled the second-story roof with tomatoes planted in big white plastic tubs. And the long back yard, which amounts to about 1/10 of an acre, became his main planting field.

The first year, he had 10 tomato plants. Last year, that number grew to 40, and this season, he’s excited to report that he has 75 that were grown from seeds he got at the Brooklyn Grange greenhouse. 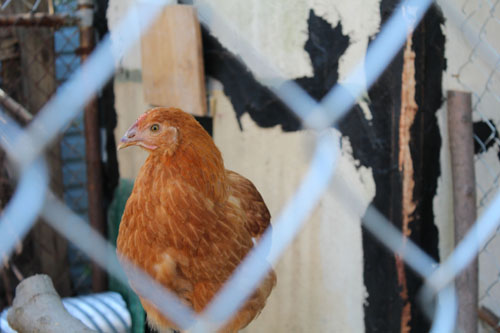 Photo by Nancy A. Ruhling
A Red Star looks out through the chain-link coop, which has room for 25.

“I admit it — growing is a little bit addictive,” he says. “It’s also hard work to scale it up. It’s time-consuming, too, but when you nurture the plants from the beginning and see how much work it takes to cultivate them, it makes them more special.”

These days, in addition to tomatoes, he grows cucumbers, broccoli, radishes, Romaine lettuce, Swiss chard, carrots, white onions and five kinds of potatoes. The fruit of the fig tree, which probably has been there since the time the building was erected in the 1920s, goes to a local restaurant. 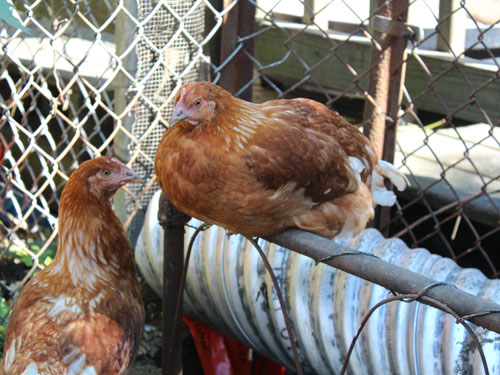 Photo by Nancy A. Ruhling
Rob hopes to market the chicken eggs.

“I can’t wait to taste the purple Majesty potatoes,” he says, planting his hands on one of their round wire cages. “Do you know that each one of these plants will produce 100 pounds of potatoes?”

Hellgate Farm is designed to provide food not only for Rob’s tenants but also for the community. Every Sunday, he’ll be selling tomatoes at The Queens Kickshaw. 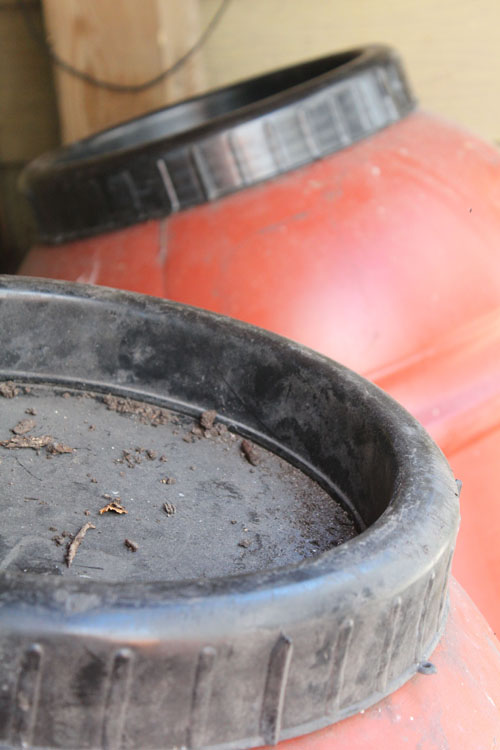 Photo by Nancy A. Ruhling
The barrels at the composting station.

“My goal is to integrate urban farming with housing,” Rob says, adding that he recently spent nine weeks in New Mexico working with Earthship, a group that builds sustainable housing. “The food grown would feed the families who live there. While I was with Earthship, I thought, ‘I’m living as people should be, but I’m not influencing people.’ It’s fun to live in cities, but the fact is that we need to produce our own energy and our own food.” 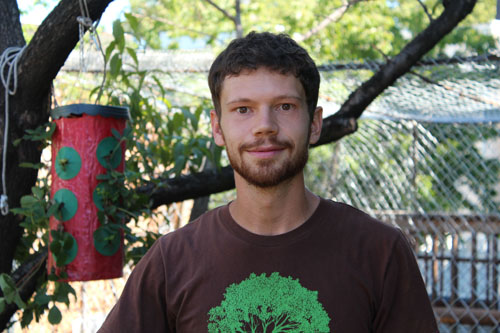 Photo by Nancy A. Ruhling
Rob says the farm is fun work.

Rob’s tenants have taken to the farming life as much as he has. In addition to buying his produce, they religiously fill the big rust-red compost barrels he installed between their building and his.

Rob may be growing crops, but he says that that doesn’t make him a farmer. 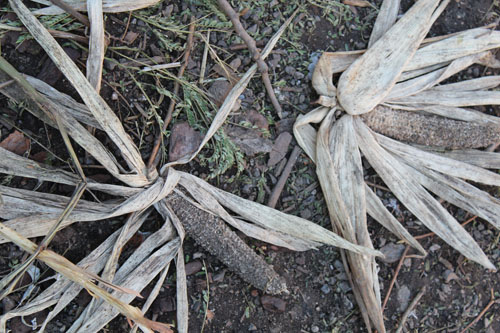 Photo by Nancy A. Ruhling
Corn husks in the coop.

“I see myself as a businessman,” he says. “And I see Hellgate Farm as a guinea pig for a much larger urban housing project.”

To that end, he’s going to turn Hellgate Farm into a self-sustaining nonprofit that will be a model for other city livers who long for the green country life. 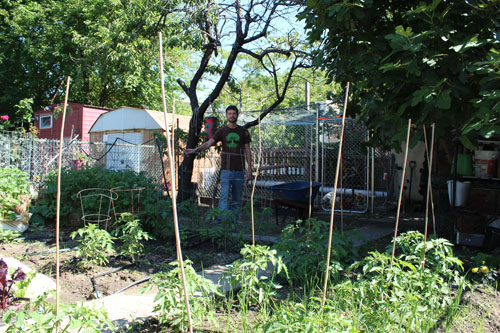 Photo by Nancy A. Ruhling
Rob outstanding in his green farm.

It’s been a month or more since Rob has been getting up with the chickens to feed them. They will be laying eggs soon. And when they do, Rob will be taking baskets of them to market.

“I’m learning a lot,” he says as he surveys his tomato plants. “And I’m winging it.”

He spies a tomato, one of the first of the season. It’s still green, and only the size of a pea. He can’t wait until it’s big and ripe enough to sink his teeth into.